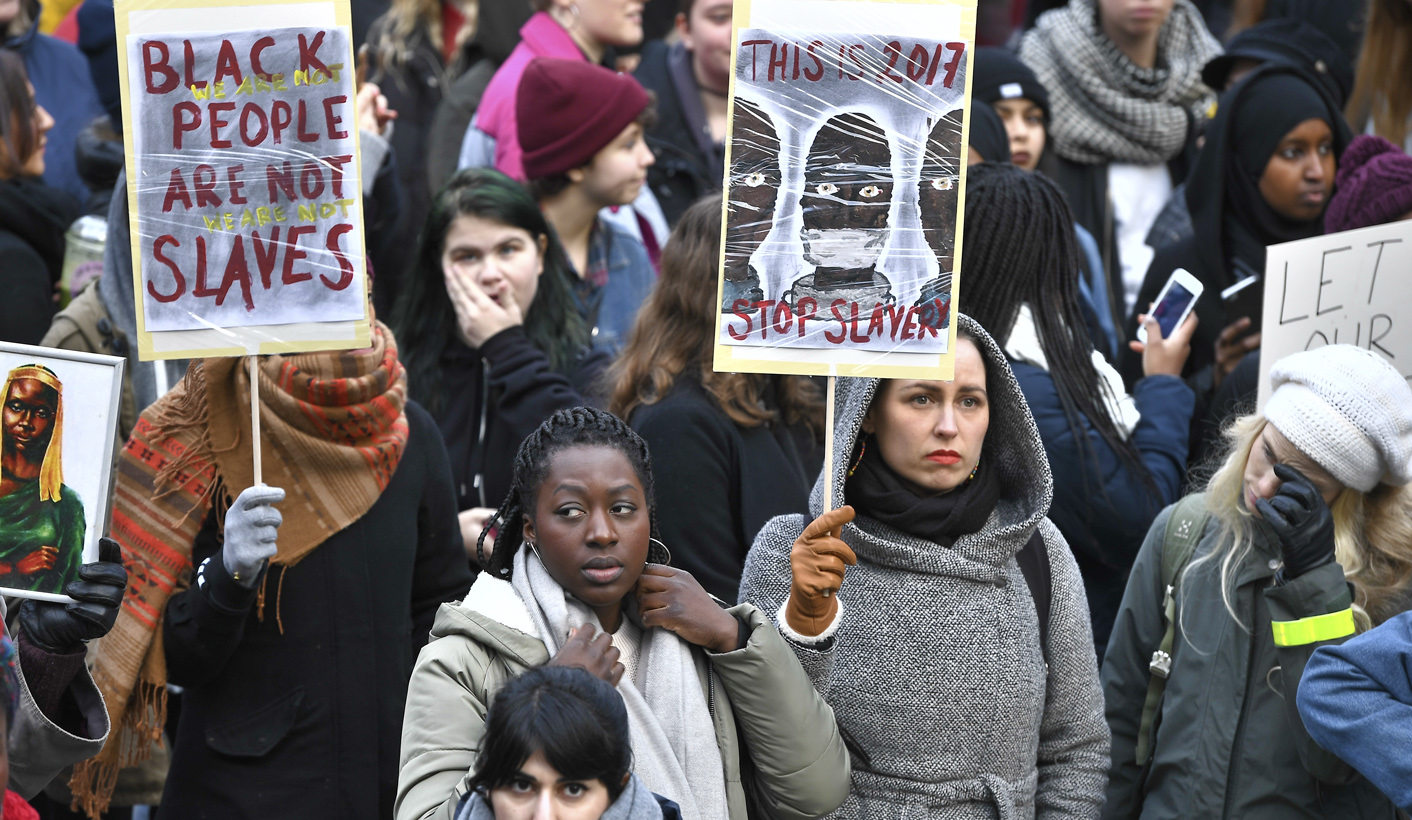 Shocking evidence of slave auctions being held in Libya are reverberating in the run-up to the African Union-European Union summit which starts in Abidjan on Wednesday. By PETER FABRICIUS.

Many countries want the African Union-European Union summit in Abidjan to strongly condemn the eruption of modern slavery, but the Libyan government and its allies are trying to dilute a proposed declaration, according to South African officials.

They said Libya and Egypt in particular were pushing for Libya not to be mentioned in the declaration, which they want to be restricted to a general condemnation of modern slavery.

Some Libyan officials are even claiming that the video transmitted by CNN purporting to record an auction of men offered to Libyan buyers as farmhands and sold for $400 is fake.

The video was presented as confirmation of earlier reports of the existence of markets for trading migrants in Libya.

The SA officials said that Egypt recognised the severity of the problem but didn’t think that naming and shaming Libya would be helpful. Others told them that the slavery problem had served to remind the world of the huge problem the country still faces and therefore the need for help.

It was not clear on Tuesday how the dispute would be resolved as ministers from the 55 AU countries and 28 EU countries still had to meet to finalise the declaration and documents for the summit, which starts on Wednesday.

One official said that President Jacob Zuma would commend the Libyan government for its announced intention to investigate the slave auction allegations.

The slavery issue has been caught up in the wider controversy of migration from Africa to Europe, which will be a major topic of the summit.

Some Africans are blaming the EU for the eruption of slavery because they say it’s the result of European countries blocking the migration of Africans to their continent.

African officials are also blaming the EU for other human rights abuses by Africans against fellow Africans in detention centres which have been established in Libya to hold illegal migrants who have been returned from Europe. The officials said that the EU had donated $100-million to establish these detention centres and so had “bloody hands”.

EU officials have insisted that they are only repatriating illegal migrants who are experiencing difficulties in Europe and are helping to re-integrate them in their home countries.

The EU officials said they are also trying to stop human trafficking of migrants as well as increasing legal migration from Africa to Europe.

Another issue which has blown up here during meetings of officials from the two continents is over the protection of LGBTI people against discrimination. Most of the EU countries have been pushing for a clause in the joint declaration which explicitly forbids such discrimination.

But some African countries – specifically Zimbabwe and Egypt – are opposed. One southern African official said the Zimbabwean position is that LGBTI people are “not minorities, they are deviants”.

South Africa proposed a compromise that the explicit language proposed for the declaration should be replaced by the language of the AU’s Maputo Plan of Action on sexual and reproductive health and rights.

That plan fudged the issue by calling for “gender equality… protecting the rights of women, men, adolescents and youth to have control over and decide freely and responsibly on matters related to sexual and reproductive health, free from coercion, discrimination and violence….”

But the SA officials said some EU member states were still pushing for more explicit protection of LGBTI people.

South Africa played a key role in ensuring that the Sahrawi Arab Democratic Republic (SADR) – also known as Western Sahara – would be represented at the summit. Officials said as late as October 16 that the summit host, Cote d’Ivoire, had not yet invited SADR, because of the objections of Morocco. Morocco only rejoined the AU in January and does not recognise the SADR as an independent state, regarding it as part of Morocco.

Several other AU states called for the summit to be moved from Abidjan to the AU headquarters in Addis Ababa if SADR was not invited. They invoked an AU rule that no AU member could be excluded from an AU meeting.

South Africa proposed as a compromise that AU Commission chairperson Moussa Faki should meet Moroccan King Mohammad VI to find a solution. The officials said the king was surprised to discover that his officials had pressured the Ivorean government not to invite SADR. Shortly after Faki’s meeting with the king, SADF received an invitation and later confirmed it would attend.

Mohammad VI is scheduled to give a keynote speech at the summit, along with Zuma – who will talk about the relations between the AU and the UN on peace and security issues – as well as Ugandan President Yoweri Museveni and Chadian President Idriss Deby.

Another hotly disputed topic revealing serious differences between the continents is the funding of peacekeeping operations. SA officials said that the African countries contributing troops to the AU’s vital peacekeeping force in Somalia, Amison – Uganda, Kenya, Ethiopia and Burundi – had met in New York in September and threatened to pull out because of the high costs involved.

That was after the EU had announced it could not guarantee its 30% contribution to the Amisom budget after April 2018.

The officials said that after the countries contributing troops issued their threat to withdraw – which would have collapsed Somalia – the EU reversed its decision to withhold funding.

But the funding of peacekeeping is still an issue as the AU maintains that this should be solely a UN responsibility, but the UN disagrees. The UN pays 60% of the Amisom budget, for instance, while other countries such as China pay the remaining 10%.

The SA officials said that the AU plan to self-finance 25% of African peacekeeping operations should be seen as a temporary measure, pending UN realisation of its full responsibilities.

The officials said the fact that Sudanese President Omar al-Bashir – who is a fugitive from the International Criminal Court (ICC) – would not be attending the summit had not become an issue.

A regional official said there was no way Ivorian President Alassane Ouattara would have invited Bashir to the summit, since the ICC is trying his arch-rival Laurent Gbagbo for alleged crimes committed in the civil war between them after disputed elections in 2010.

SA officials said the EU had wanted to include strong support for the ICC in the good governance section of the joint declaration which will be issued at the end of the summit. But the AU had insisted this be removed.

The officials said that newly inaugurated Zimbabwean President Emmerson Mnangagwa would not attend the summit.

Zuma arrived in Abidjan late on Wednesday for the summit and was due to have meetings with top EU officials to lobby for support for South Africa’s bid for a seat on the UN Security Council from 2019 to 2020.

Zuma was to meet Jean-Claude Juncker, President of the European Commission, and Juri Ratas, Prime Minister of Estonia, which currently holds the presidency of the Council of the European Union.

The officials pointed out that Zuma was concerned that the last summit between South Africa and the EU – they’re supposed to be annual – had been held as far back as 2013.

In his meetings with Juncker and Ratas, Zuma would also stress the need to change the nature of the relations between the African Union and the EU, “from a post-colonial model of dependency to a new partnership of interdependence that addresses Africa’s development challenges and contributes to shared prosperity between the two continents”, the Presidency said in a statement.

Zuma would also urge the European leaders to recognise and respect that the resolution of conflicts in Africa was primarily the responsibility of the AU, officials said.

The summit theme is officially “Harnessing the Demographic Dividend through Investments in Youth”. The focus will be on increasing European investment in Africa as well as providing vocational training for youth to enable them to take advantage of this investment through employment. DM

Photo: Protesters attend a demonstration against alleged slavery in Libya, at Sergelstorg in Stockholm, Sweden, 25 November 2017. A CNN’s footage of young Africans being auctioned off near Tripoli, filmed on a hidden camera and aired on November 14, has prompted protests in various parts of the world. EPA-EFE/CLAUDIO BRESCIANI.