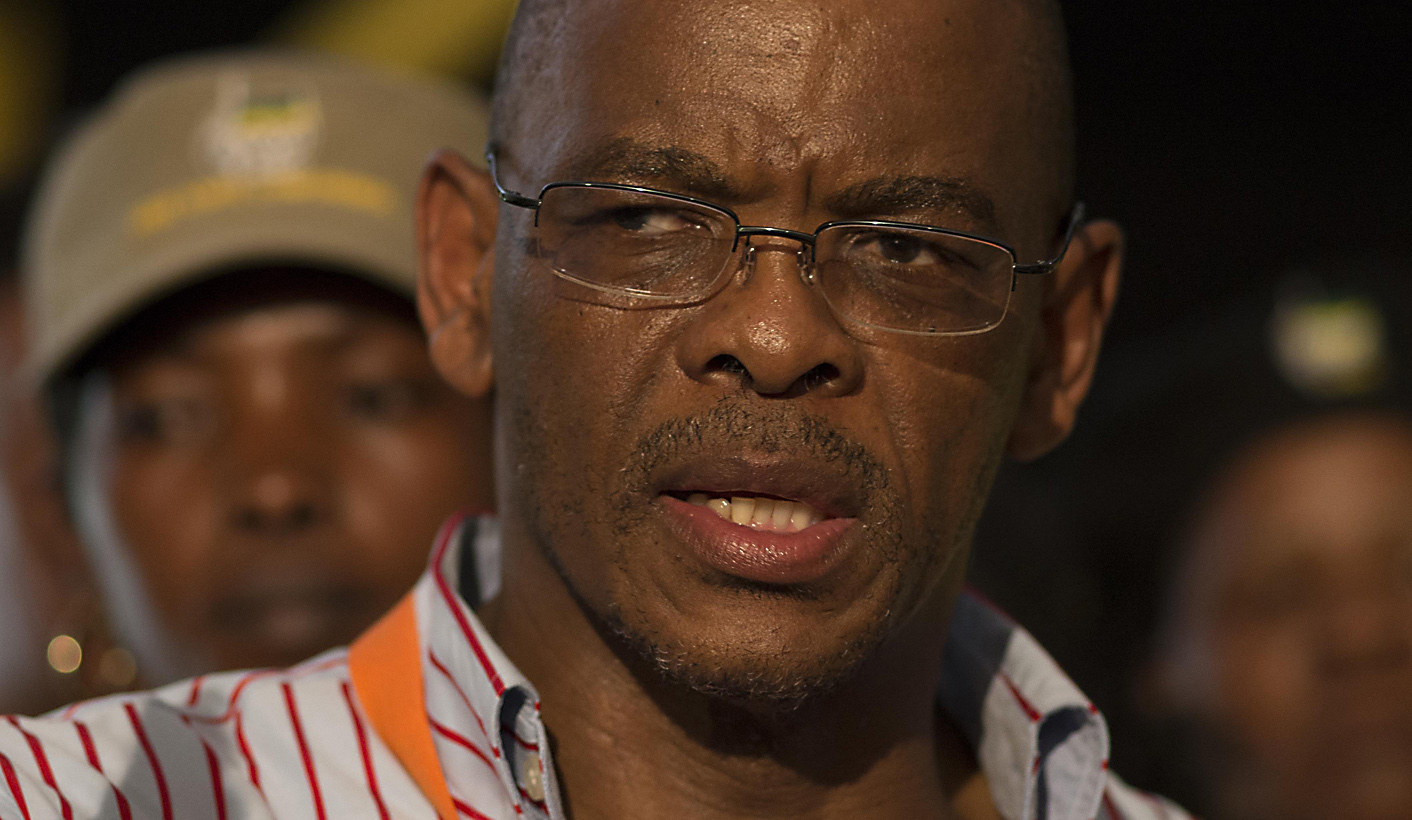 While South Africa was caught up in the 2010 World Cup frenzy, Free State premier Ace Magashule was allegedly pulling the strings behind a multimillion-rand tender to provide soccer-related regalia. Seven years later, the contract has come back to haunt the premier, as the businessman at the centre of the deal has claimed that his company was used as a front for an entity allegedly close to Magashule. By Tabelo Timse for AMABHUNGANE.

Abiel Mokotso, sole director of Bokamoso Media House, has given details of how a meeting with the Free State premier, Ace Magashule, in February 2010 led to him landing a multimillion-rand contract without exerting much effort.

Although the premier has previously denied any direct role in the awarding of tenders, this case offers a glimpse of how Magashule allegedly manoeuvres behind the scenes on contracts that end up being handed to his associates.

The deal has turned sour for Mokotso who is now facing a criminal case and R2.2-million fine from the South African Revenue Service (SARS).

But Mokotso has also exposed what appears to be an initial police reluctance to investigate his countercomplaint against Magashule.

Significantly, the 2010 deal involved the powerful Dockrat family and their Sedgars group, who have interests in retail, clothing and construction and have long been regarded as close to the Free State premier.

Mokotso opened a case of fraud against Magashule and Sedgars at the Bethlehem police station in 2015.

Magashule failed to respond to questions. The Dockrats have denied any wrongdoing.

Now amaBhungane has learnt that there are claims the police inquiry into Magashule’s alleged role in the matter was buried without proper investigation.

The disclosure comes from a leaked report by the Independent Police Investigative Directorate (Ipid), which shows that on 11 October 2017 Safety and Security Minister Fikile Mbalula asked Ipid to review the case.

Mokotso confirmed to amaBhungane that he had written a letter of complaint to Mbalula in June 2017 about how the case was handled.

“The investigating officer told me it would be difficult to investigate someone as high-profile as Ace and after that I never heard from him,” said the businessman.

It appears that Mbalula sprang into action only in October, shortly after he was himself embroiled in a mini-scandal involving the Dockrats.

Two days before his letter to Ipid, Mbalula was the subject of an Eye Witness News exposé suggesting that Sedgars Sports sponsored at least part of the Mbalulas’ family holiday in Dubai in late 2016. Sedgars denied paying for the trip.

Mbalula denied any wrongdoing, but two days later he wrote to Ipid asking it to investigate the conduct of all police officers involved in Mokotso’s 2015 case and provide a progress report on the matter.

In his reply to Mbalula, Ipid chief investigator Matthew Sesoko highlights irregularities in the police investigation and comments on the “suspicious conduct” of the investigating officer.

Sesoko tells the minister that he intends recommending that the Hawks launch their own investigation.

Setting out the allegations, Sesoko writes that, according to Mokotso, he met with Magashule in Bloemfontein on 28 February 2010.

“The Premier promised to turn the complainant [Mokotso] into a millionaire,” Sesoko writes.

“He urged the complainant to leave the municipality and work for the ANC as a regional secretary. The complainant was promised businesses and that his wife would be employed by the premier.

“In April 2010 he received a call from the premier requesting him to meet Mr Dan Kgothule, member of Executive Council responsible for Sports and Culture. The complainant met Mr Kgothule on 22 April 2010 in Kroonstad and was told to buy two tender documents.

“The premier informed the complainant to take the tender documents to Mr Fayaaz and Mr Zaid Dockrat of Sedgars Company in Vereeniging to assist him with pricing.

“The complainant returned the [tender] documents to the Department of Sports and Culture.

“On 25 May 2010 he received a letter from SCM confirming that the tender has been awarded to him. He accepted the tender and signed the documents.

“On 26 May 2010 Sedgars delivered the goods to him and he in turn delivered to the department.

“He then called Premier Ace Makgashule and complained that Sedgars has transferred the money and did not leave the money they have agreed upon. The premier promised to intervene.

“Mr Zaid Dockrat said the R1,000,000 was enough to cover SARS. He [Mokotso] was surprised when SARS informed him that he was owing R2,000,000 for the money he received as a result of the tender facilitated by the premier for Sedgars.”

Ipid notes that an examination of the docket revealed that the case was never investigated.

Sesoko told Mbalula that the investigating officer received an instruction dated 30 August 2015 to take a supplementary statement from the complainant, Mokotso.

Ipid notes that Mokotso disputes this ever happened:

“According to the complainant, he only spoke with the investigating officer the day the case was opened and no further consultation took place after that.”

Ipid says the investigating officer expressed the view that the complaint is purely a civil matter between private individuals and the case was closed as “unfounded”.

Ipid told amaBhungane that the allegations of misconduct and defeating the ends of justice against the police officer(s) involved in this case were currently under investigation while the criminal matter had been referred to the Hawks for investigation.

Free State Hawks spokesperson Captain Sifiso Nyakane would neither confirm nor deny that a complaint had been lodged, but said: “We have no case against the premier.”

Responding to questions from amaBhungane, Sedgars chief executive Zaid Dockrat denied using Mokotso as a front and said it was Mokotso who approached his company for help.

“Bokamoso [Mokotso’s company] was not in a position to make payment for the goods. In order to secure payment, Sedgars took cession of the account. Sedgars supplied goods to Bokamoso at wholesale price, and Bokamoso in turn added a mark-up,” said Dockrat.

Dockrat however said he didn’t know how it came about that Mokotso approached Sedgars, but added that his company had been in business for more than 35 years and due to the nature and prominence of its business, it has business relationships with various business leaders, professionals, politicians and the like.

“At no point did Premier Magashule have any involvement in this matter. Bokamoso did not, at any stage, indicate that Premier Magashule had referred him to Sedgars. It is our view that this was a normal transaction initiated by Mokotso, and there was nothing to suggest anything to the contrary,” said Dockrat. DM