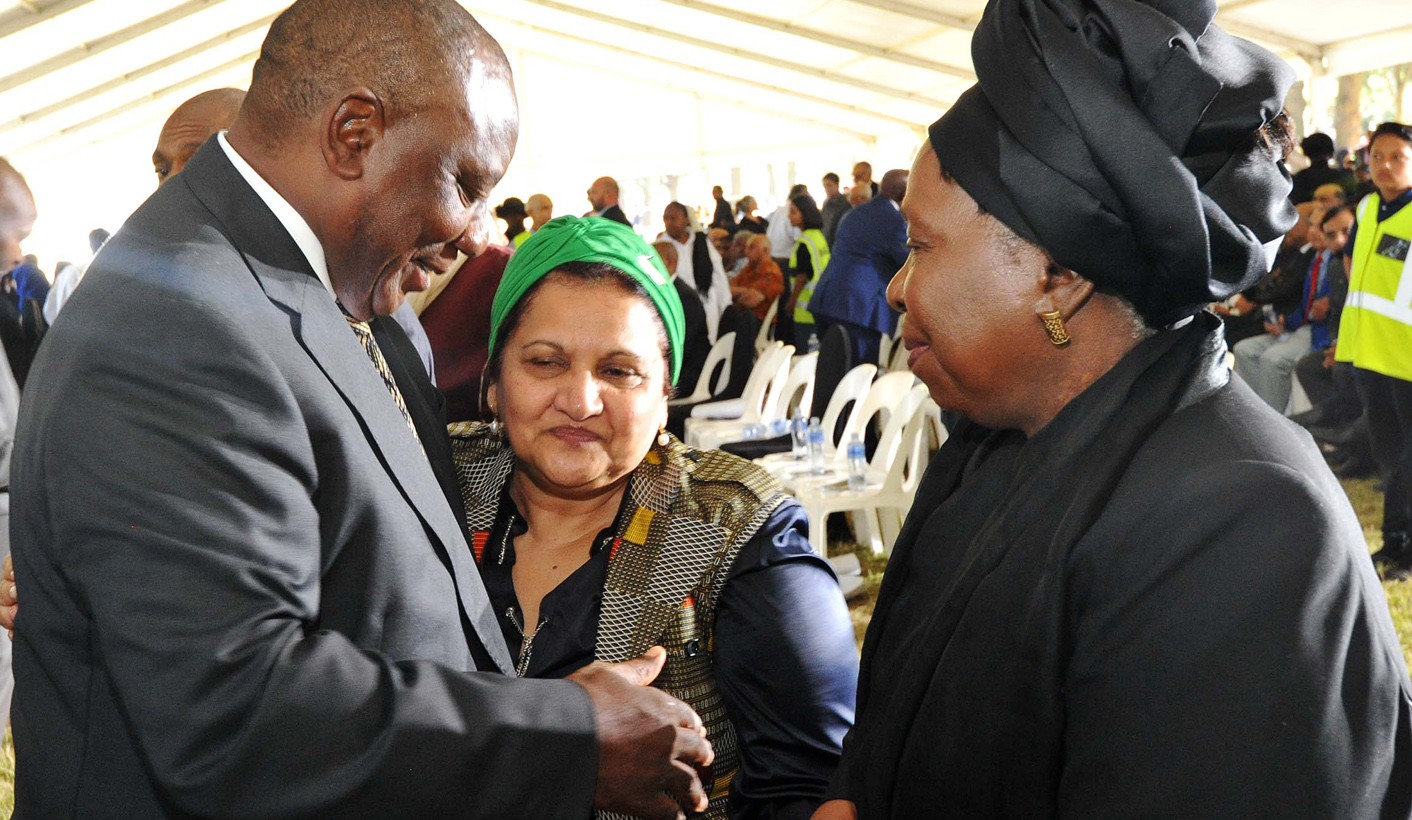 ANC presidential hopefuls have left South Africans guessing as to how they would do policy once elected to power. This is because the party’s leadership campaign is stuck in a Nowhere Land between underground lobbying and open democracy. Now there has finally been a push for this gap to change fundamentally. By CARIEN DU PLESSIS.

With less than three weeks to go to the party’s elective conference in Johannesburg, two things are certain. The first is that, based on branch nominations, Deputy President Cyril Ramaphosa and ANC MP Nkosazana Dlamini Zuma are the only two serious contenders for the top post, and the second is that this race is a close one.

On some possibly more important issues, such as whether the ANC will still be unified come December 21, the morning after, and which policy directions each of the candidates could pursue, and how, there’s much less certainty.

Much of this has come about because the contenders are campaigning while at the same time they are not. Seven leaders have put their hands up for the top spot – a record for the 105-year-old party – and contestation is as fierce as ever.

Party rules and convention dictate that those with ambition should do their best not to show it. In line with this, the two leading contenders have been fairly modest: addressing mini-rallies and “cadre forums” arranged by the party and alliance structures, but at the same time not showing too much eagerness by limiting media interviews where they could be quizzed about their ambitions and ability. Last week, three candidates cancelled their date at The Gathering at the last moment, while 702’s Eusebius McKaiser raged on social media after he got the cold shoulder from Dlamini Zuma, whose interview was scheduled for Monday.

The five other contenders – the most promising among them, ANC treasurer-general Zweli Mkhize, has managed to muster a few branch nominations but is unlikely to get a province – have been far more forthcoming with their plans, but perhaps also because their chances of getting a top spot are slimmer and they had to try harder.

But even they have not really differed about key policy issues, such as whether or not radical economic transformation is what is needed or not.

In a recently distributed document entitled “Preparing for National Conference” distributed among ANC members last week, there was a recap of the “key debates” from the party’s July/August policy conference.

Among others, it summed up the debates on “white monopoly capital”, “radical economic transformation”, land redistribution and a whole host of other policy topics.

It defines radical economic transformation (RET) as “the rapid transformation of the economy and society to overcome poverty, unemployment, inequalities and ownership patterns of the past”.

It’s more than black-based economic transformation. It aims to change the structure and ownership of the economy, deal with spatial disadvantages suffered by the poor, involve workers in profit and share ownership, and – perhaps the hand of the ANC Women’s League here – end patriarchal relations.

“RET cannot aim to create a small black elite,” the document further reads. “It has to include the masses of our people and improve their lives.”

As this is a policy of the ANC, neither of the leading candidates disagrees with it, although there is a strong perception within the ANC and especially also from observers that the implementation style of the leaders would differ – and this is what will ultimately matter.

The ideal leadership candidates in the ANC, according to the latest document, are “disciplined members of the ANC with at least 10 years of unbroken membership”, and they are free of “any disciplinary committee findings or criminal convictions”.

There are more guidelines, including that a leader “should have the conviction to state his/her views boldly and openly within the constitutional structures of the movement” (which does not necessarily mean “in public”) and “not to cower before those in more senior positions in pursuit of patronage, nor rely on cliques to maintain one’s position” – at least that is the ideal.

Members are free to vote according to their own opinion:

“Anyone trying to use improper influence or promising a reward to get a member to vote for a special nominee will be guilty of a disciplinary offence and should be reported to the Electoral Commission or the Disciplinary Committee.”

Again, this is the ideal. Talk within the party is of cash rewards in exchange for votes being worked into campaign budgets after this practice became more common following the contested 2007 conference. This conference, some speculate, could be many times more expensive in this respect.

In the party’s discussion document on organisational renewal prepared for its policy conference, the party says it should look at creating space for a more open process to elect new leaders.

Lobbying in the party has only been tolerated “through conference sessions” – that is, during the actual gathering with a day or two before voting.

“What has been proven to be a challenge is the lobbying process engineered by clandestine factionalism which destabilises the organisation. The perception that lobbying is prohibited creates favourable grounds for destructive factionalism,” the document reads.

“Efforts should be made at regularising lobby or interest groups activity within the organisation,” and the party should look to “the experiences of social democratic and left-leaning parties” to “develop guidelines to formalise and manage various interest groups within its ranks”.

In the same document, the party also says:

“The ANC nominations and elections processes must be reviewed to allow for open contestation with provisions for the membership to engage the candidates.”

It doesn’t give any detail as to how this could happen. Although it is unlikely that the party would engage the Democratic Alliance on this, this opposition party has in the past created opportunities and platforms for leaders to state their positions. At elective conferences, for instance, they are given slots to state their views openly. They are also allowed to distribute campaign materials at these gatherings.

The past few months have, however, perhaps been a good example for the ANC of how not to do it.

Candidates were invited to address “cadre forums” under the guise of political education, but they haven’t had equal access to provinces which were not supportive of them.

Ramaphosa, for instance, after addressing a cadre forum in Newcastle while in the area to campaign for a by-election in Nquthu, was told off by the pro-Dlamini Zuma provincial leadership for doing so.

The only way he subsequently gained access to the province was by invitation of the Young Communist League, and only after a court in September said the 2015 conference where the current provincial leadership was elected was illegal and void.

In Mpumalanga, where Premier David Mabuza has been pushing a “unity” agenda, not much open campaigning by any candidates was allowed at all until a couple of weeks ago.

The party insists that the responsibility lies with branches “to nominate the best among us to lead the ANC and the nation”, and it should create a space to run campaigns to effect this.

There is a growing awareness in the party that it would have to up its electoral game if it wanted to remain in power. Ironically, by the time it gets its campaigns for internal elections right, it might be have lost power in government already. DM