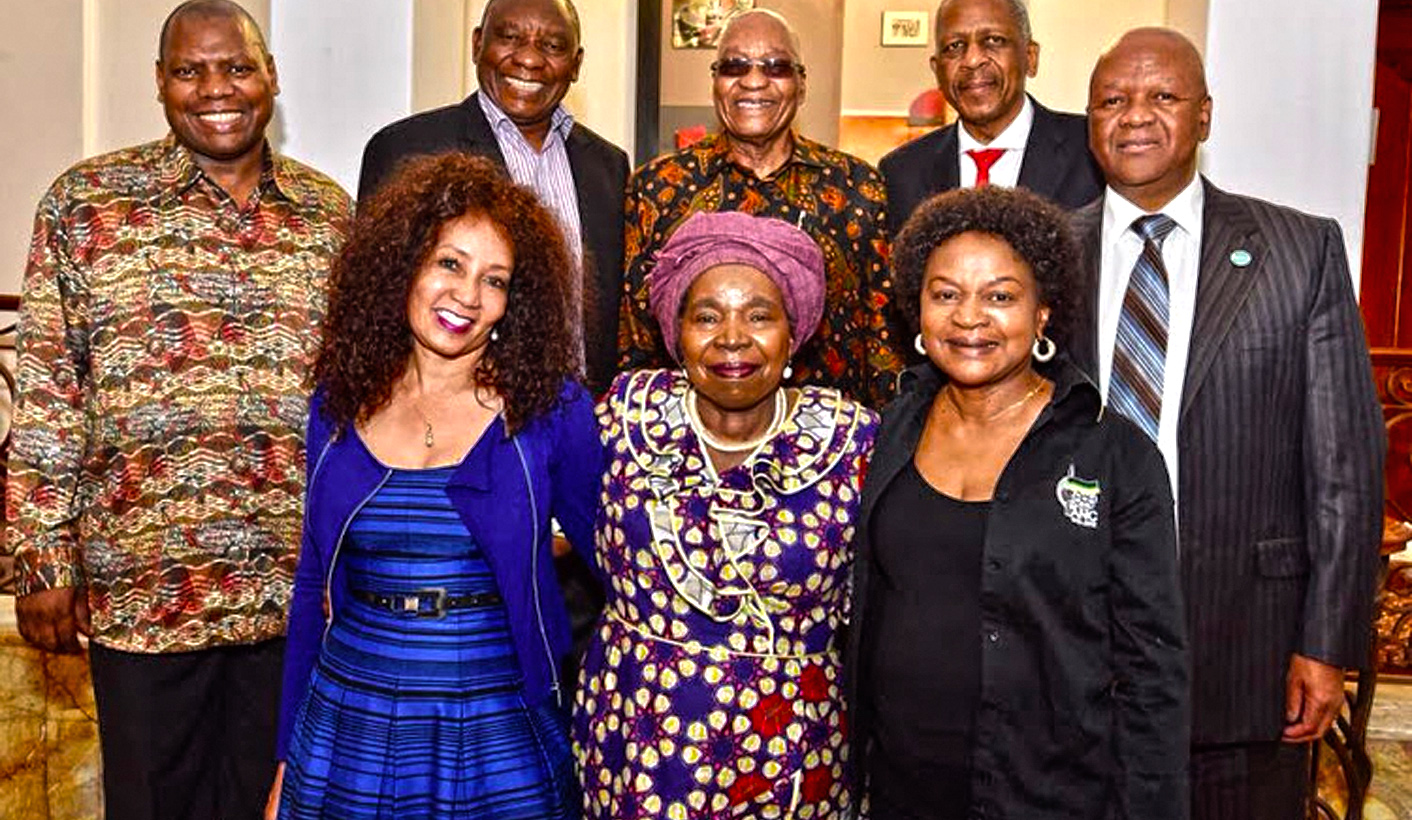 After 11 months of dire warnings about the probability of chaos emerging during the ANC’s leadership conference, along with dark predictions about disrupted gatherings marred by violence, it appears the party is perhaps taking steps to heal itself. For the moment these are baby steps, but could eventually turn out to be of significance. It is even possible that the grand climax many have been expecting to occur in three weeks’ time may turn into a somewhat muted affair. Of course, all of this appears to be a bid to avoid the ANC’s rating among 2019 voters mirroring the country’s rating from the majority of the international ratings agencies. While it is entirely possible that it will be effective, in the longer term it won’t remove the dynamics that got the party into an unenviable position in the first place. By STEPHEN GROOTES.

On Thursday night the first images emerged of the meeting of the ANC’s top leadership candidates. Hosted by President Jacob Zuma, it was perhaps the first time most people have seen him, Mathews Phosa, Lindiwe Sisulu, Zweli Mkhize, Nkosazana Dlamini Zuma, Jeff Radebe, Baleka Mbete and Deputy President Cyril Ramaphosa around the same table. Inevitably, it was named “The Last Supper”, along with jokes around Judas and the disciple Peter (will anyone else around that table deny supporting Zuma thrice before the cock crows?). But the political imaging was clear, the ANC is united, despite the leadership battle, and Zuma is the party elder who is passing the leadership baton willingly. It is the type of effective politics that the ANC used to be very very good at. More interestingly, it is also one of the first assertive moves we’ve seen from Zuma in a long time.

The morning after the dinner, it was confirmed, both by Secretary-General Gwede Mantashe and his Deputy Secretary-General, Jessie Duarte, that conference delegates will be asked to change the voting system. In the past, the vote for the top six was held at the same time. At Polokwane this pitted one slate against the other, with the consequence that Zuma’s slate won, and Mbeki’s slate lost. This meant that there was no time for negotiations once the balance of power had been established, and people on the Mbeki slate who could have been accommodated by Zuma in a bid to create unity were left out in the cold. Now delegates will be asked to approve a plan that would see the vote for the leader being held first, which would then be followed by a delay before the next vote is conducted, and so on. The idea is to break the power of slates. It would mean that if, for example, Candidate X beats Candidate Y for the position of leader, Candidate X can now go to Candidate Y and ask her or him if they would be available for the position of deputy leader.

As a structural change, this is an impressive idea. In the short term it allows more scope for a deal. It gives the various candidates and leaders more room in which to move, making it unlikely that they will oppose it. In addition, the branch delegates at the conference gain possibly more power because they may now have more options to choose from, rarely a bad idea.

The problem of slates has been railed against by virtually every ANC national leader over the past 10 years, starting immediately after they were first used at Polokwane. So why has it taken this long for someone to come up with this solution? And is there some kind of new political agenda behind it?

The main point to make is that if one candidate is significantly stronger than the other, they lose nothing by agreeing to this. If they win the leadership election, they can still put up their preferred candidate in the election for deputy leader, and still win. So while it may appear magnanimous for a front-runner to agree, they can still end up with exactly the slate they want.

We are told that Zuma raised this voting change during that dinner. This is consistent with the campaign he has pursued so far, with the person who loses the leadership race automatically becoming a deputy leader, and for the party to have two deputy leaders. The short-term goal is obvious – the losing candidate, and their constituency, would be included within the party’s top leadership. This would help prevent a massive split in the party, and the possible collapse of many of its other structures.

But in the long term it doesn’t appear to fix much, or anything. It essentially recreates the factionalism that we have now, by replicating the same situation that has occurred in the ANC twice since it came to power – a leader with a strong deputy leader, a rival with their own constituency.

That said, for the party’s power brokers at the moment it is a sign that they are so worried about a split before the 2019 elections that this risk is worth taking. This move could also prevent other negative outcomes for the Zuma group. They may be worried about Ramaphosa implementing a China-style anti-corruption campaign immediately upon ascending to power, with Zuma ending in jail. By having, for example, Dlamini Zuma as the deputy, or a deputy leader, she could in theory put the brakes on such a campaign. She would be able to say, in the kind of meetings where this would be discussed, that any such campaign would break up the party, seeing her leave, taking out a sizeable chunk of the party with her. For both Zumas, maintaining some power within the ANC is always better than having none.

There is also a suggestion that there should be two deputy leaders, to ensure that the losing candidate is accommodated. But this also does not achieve much that is significant. If one deputy represents one faction and the other deputy the other, they could simply cancel each other out. You can imagine the fun journalists would have comparing their public comments, and their inability to stop sniping at each other. In the end, the elected leader of the party would still hold the balance of power.

From a policy point of view, the question coming out of this proposal is whether it would lead to a situation where the ANC is actually able to create and, more important, implement policy that could lead to economic change, and a possible beginning of the end to economic apartheid. The short answer is probably NO. The more diverse and different the constituencies represented in the top leadership, the less likely any important policy will change. This could lead to more of what we have seen, which is an ANC that represents most, perhaps almost all, of the aspects of our society, but is unable to agree on any fundamental change. (Just as Moeletsi Mbeki claims that liberation movements eventually lose power because they are unable to grow economies over the longer term.) It would also dampen the hopes of those who believe that if Ramaphosa wins a comprehensive victory he would have a mandate to actually implement proper structural reforms.

At the moment there is much speculation about how close this contest will be. First it seemed that Ramaphosa was in the lead, now the Dlamini Zuma spin has claimed that it is she. The evidence is hard to weigh, at least until the ANC provinces hold their general councils. But from a structural viewpoint, the fact that these deals are on the table at all points to what could be a close contest, and that neither side is sure that their candidate will win. However, this also has the consequence of probably ensuring that the conference does actually go ahead without disruption. If everyone believes they still have a stake in the game, there is no need for them to disrupt. Proxies of all sides, from Pravin Gordhan to Jessie Duarte, have said that the conference will go ahead and emerge with an elected leader.

The true balance of power really is about who the delegates support. If Ramaphosa is supported by a significant majority he has no need to even consider accepting Dlamini Zuma as his deputy. In fact, he could actually come under intense pressure from his own supporters to refuse. Several of his proxies, including Gordhan and Jackson Mthembu, have said that Zuma himself should be removed from power as soon as possible if Ramaphosa wins. The point of many of his supporters would be that they pushed hard for Ramaphosa to win precisely because they want Zuma out of power. Allowing Dlamini Zuma to retain some power would work against that.

Amid all of these proposed changes to the structure of this election, one thing remains unchanged. In the end, it is about the delegates. And because of that, because of the vibe they will demonstrate on the floor of the conference on the first day, it is only then that we should get a strong indication of how this entire leadership battle might end. DM