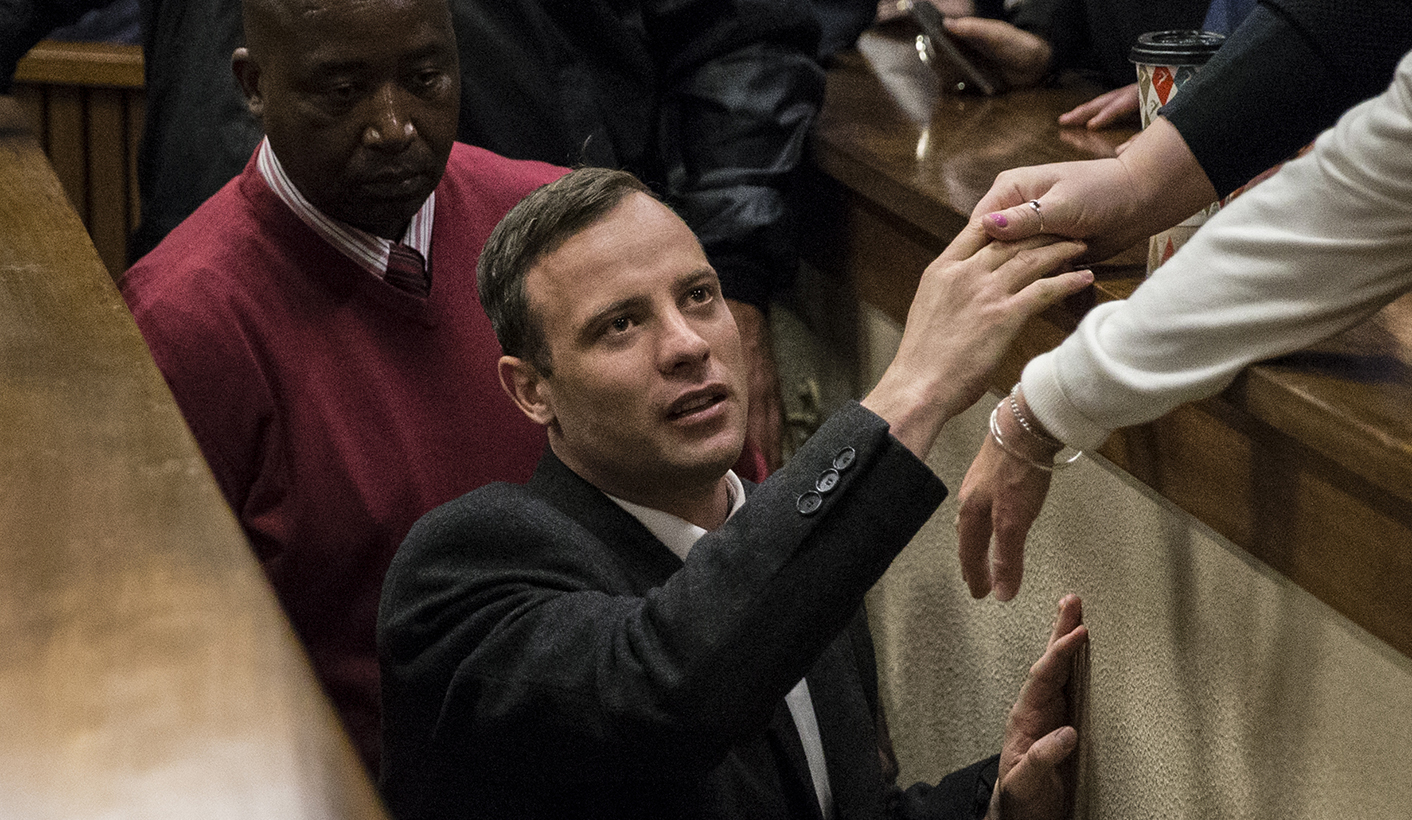 On Friday, athlete Oscar Pistorius received his third – and likely final – sentence for the murder of his girlfriend Reeva Steenkamp. Pistorius’s original sentence of five years was changed last year to six, following the Supreme Court’s overturning of his initial culpable homicide conviction to murder. Now the same court has imposed the mandatory minimum sentence for murder of 15 years. It has been a messy and controversial process, but one potential positive aspect to emerge from it might be clarity on South Africa’s often wildly uneven criminal sentencing. By REBECCA DAVIS.

When the National Prosecuting Authority announced its intention to appeal the murder sentence of Oscar Pistorius in July 2016, it stated that it believed a 6-year sentence was “shockingly too lenient”.

That the Supreme Court of Appeal agrees was made clear on Friday not just by Pistorus’s new sentence, but by the fact that Judge Willie Seriti echoed the NPA’s exact wording in his judgment, terming the original sentence “shockingly lenient”.

If the former paralympian’s 6-year sentence had been upheld by the appeal court, he would have been eligible for parole in 2019. As it stands, the earliest he is now likely to leave jail is around 2023: the minimum detention period is half of the sentence. The longest period Pistorius could be kept in jail before he is paroled is around 8 years from now.

Pistorius has been held in the Kgosi Mampuru Correctional Facility since July last year. As he has already served time, the total duration of his sentence from now is 13 years and 5 months.

In the NPA’s July 2016 statement explaining why the body was appealing his murder sentence, it said it hoped that the appeal would “clarify further the principles of sentencing, particularly in crime categories for which there are prescribed minimum sentences ordained by legislation”.

However, the legislation allows for courts to impose lesser sentences if “substantial and compelling circumstances” exist. It was this leeway that trial judge Thokozile Masipa drew on when sentencing Pistorius to six years in 2016.

Masipa found that among the mitigating circumstances were his sense of vulnerability due to his disability; his account that he believed he and Steenkamp were under threat from an intruder; his attempts to resuscitate Steenkamp post-shooting; and Pistorius’s attempt to meet Steenkamp’s family subsequently to apologise – which the judge felt demonstrated remorse.

The Supreme Court of Appeal disagreed that these factors constituted “substantial and compelling circumstances” to justify a deviation from the minimum sentence.

“I am of the view that the trial court over-emphasised the personal circumstances of the respondent,” wrote Judge Seriti.

Crucially, Judge Seriti contested Masipa’s belief that Pistorius had demonstrated genuine remorse for the crime. Here it appears that Pistorius’s decision not to testify at his second sentencing hearing worked against him. Judge Seriti wrote that his failure to “take the court fully in his confidence despite having an opportunity to do so” was evidence that Pistorius “is unable to appreciate the crime he has committed”, and by definition is insufficiently remorseful.

Judge Masipa felt that Pistorius was a good candidate for rehabilitation and emphasised that in her sentence. The effect, Judge Seriti wrote, was that insufficient weight was placed on the other sentencing functions of crime prevention, retribution, and deterrence. The latter is particular significant: the judge stated that Pistorius’s low sentence “has the effect of trivializing this serious offence”.

This was a view expressed by many figures in civil society and politics at the time of Judge Masipa’s 2016 sentencing. Masipa was also accused of having displayed inappropriate sympathy to Pistorius: in handing down her sentence, she referred to the athlete as a “fallen hero”.

The Supreme Court of Appeal’s Friday judgment amounts to the second smackdown for Masipa from the court in this case, after already having her original culpable homicide verdict overturned. The athlete’s only remaining legal avenue now is to approach the Constitutional Court, where he is unlikely to meet with success: his legal team’s previous expedition to the country’s top court was dismissed.

On Friday there were expressions of sympathy for Pistorius on social media from observers – seemingly particularly from abroad – who felt that the athlete’s messy journey through the courts was evidence of the case being mishandled and possibly used as a political football.

An alternative point of view, however, is that the new sentence should be welcomed as a warning to South Africa’s judges to carefully consider the discretion afforded them by the country’s Sentencing Act.

Mandatory minimum sentences were introduced in South Africa in 1998 for serious crimes as a result of public concern about over-lenient parole allowances following the scrapping of the death penalty after the transition to democracy.

Sentencing for crimes not covered by the mandatory minimum sentencing legislation continues to be the subject of major public controversy. Particularly heavy sentences handed out to rhino poachers over the last few years have attracted concern in some areas, while other portions of the population are aggrieved by punitive sentences for those convicted of criminal acts motivated by racism.

When the so-called “coffin duo” – two men convicted of forcing Rethabile Mlotshwa into a coffin – were sentenced to 11 and 14 years in October, for instance, a common observation on social media was how much more severe these sentences were than the one meted out to Pistorius.

It’s probably safe to assume that the observers making this complaint will not be silenced by the extension to Pistorius’s sentence, since their point was likely not to draw attention to the leniency afforded Pistorius but solely the supposed harshness shown the coffin duo.

With sentencing already a murky terrain unavoidably inflected by individual judges’ perceptions, however, the framework of mandatory sentencing should surely be welcomed and adhered to as far as possible. This is particularly the case in relation to a figure like Pistorius, where many will have read Masipa’s “substantial and compelling circumstances” for leniency as really equaling, crudely, “rich white celebrity”.

There is a particular selectiveness to the way the South African public reacts to verdicts and sentences on a case-by-case basis. This was seen perhaps most alarmingly in the calls for the death penalty for the murderer of Port Elizabeth teacher Jayde Panayiotou, which mysteriously seemed to quieten when it emerged that the primary suspect in her death was her husband. Also on Friday, Christopher Panayiotou received a life sentence for arranging the murder of Jayde. That sentence has seemed less controversial, but it was an example of a judge adhering to the minimum sentencing framework for aggravated murder – a more serious category of crime than Pistorius’s.

The Pistorius case continues to occupy a fraught spot in the public conversation because of its lingering ambiguity – in terms of the fact that no comprehensive motive was ever offered by the state for Steenkamp’s shooting. But in other respects the facts of the case are clear: Steenkamp was shot and killed by Pistorius, and nobody has ever disputed that. It is precisely in cases of ambiguity that the minimum mandatory sentencing legislation becomes critical.

Some of those complaining loudest about Pistorius’s new sentence are the first people to complain that South African crime is not dealt with sufficiently harshly. It’s not possible to have it both ways just when it suits us. DM