The Gathering: There’s no point in icing a rotten cake, JZ deserves an orange overall, and other thoughts from key SA voices 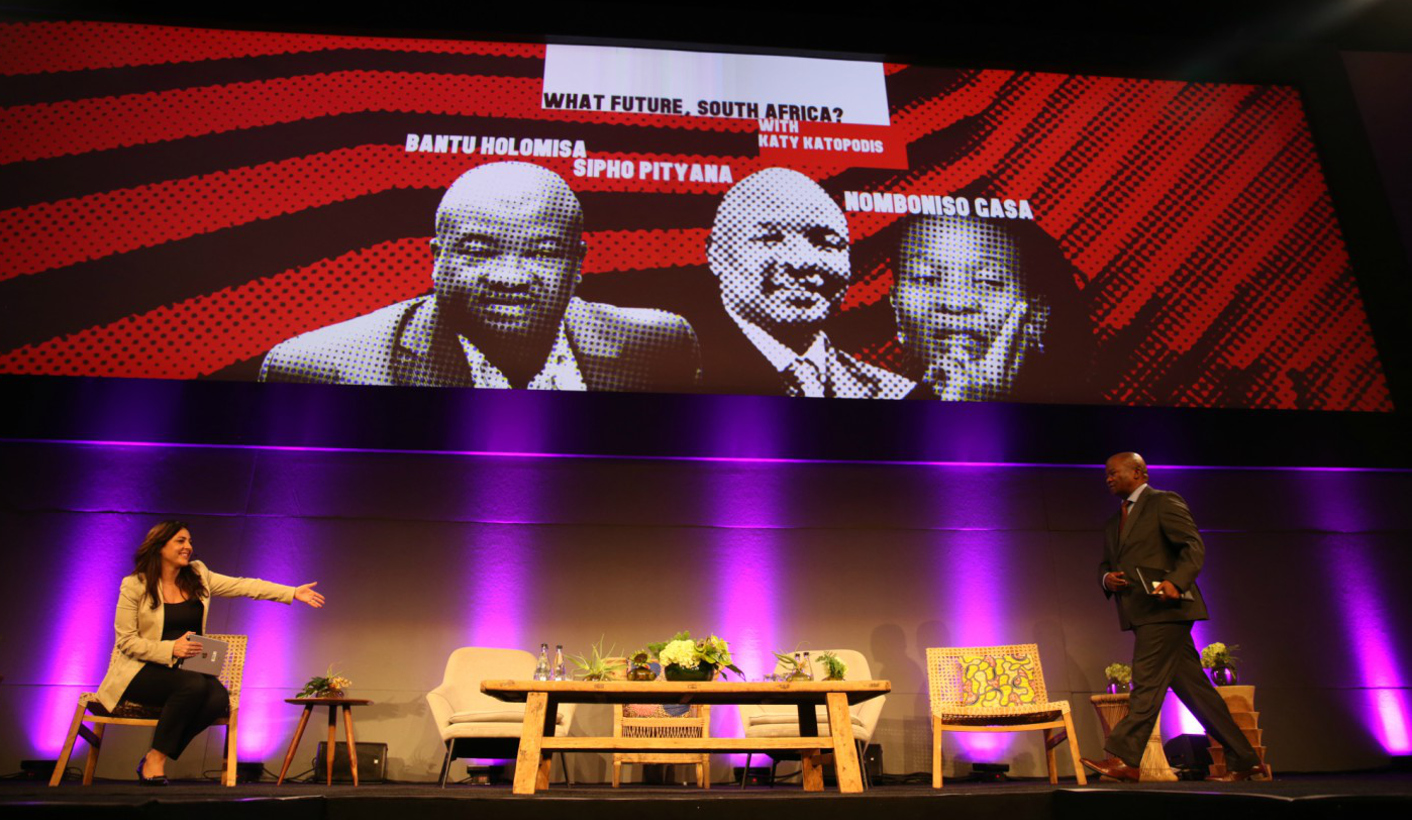 Academic and writer Nomboniso Gasa wants to see current leaders in orange overalls, UDM leader Bantu Holomisa wants to see a national convention to take stock of South Africa’s democracy so far, while businessman and Save South Africa convenor Sipho Pityana wants civil society to rise up. They were all panellists responding to the question: “What future, South Africa?” at The Gathering in Sandton. By CARIEN DU PLESSIS.

People could no longer pin their hopes on the current ruling party was UDM leader Bantu Holomisa’s opening salvo. He was talking about the ANC, which had no official representation at The Gathering after three of its speakers – presidential hopefuls Nkosazana Dlamini Zuma, Lindiwe Sisulu and Zweli Mkhize – pulled out a few days before the event.

The ANC has been “on the back foot since 2008, when they took a decision to support President [Jacob] Zuma, who was a criminal suspect, and took him to the Union Buildings, said Holomisa.

“Today, as we speak, they are fighting amongst themselves. Unfortunately that infighting has affected the day-to-day administration of South Africa.

The uncertainty about the outcome of the ANC’s December conference was creating “even more havoc”, Holomisa said.

He added that all the presidential hopefuls had been defending Zuma, and had no credibility left.

Academic and writer Nomboniso Gasa took it a step further, saying South Africans should start trying to imagine the type of society they want, with or without the ANC. “If the ANC would like to, they can follow, but it’s up to the people,” she said.

Save South Africa convenor, businessman Sipho Pityana, depicted it more graphically. “If you take a rotten cake and put icing on it, it doesn’t stop being a rotten cake. So the December conference is about putting icing on a rotten cake,” he said, to applause.

The ANC had failed to “realise it is corrupt and bankrupt to the core” and even though new leadership will be elected, the ANC’s credibility and integrity were shot.

“If you are going to be led by people who produced a Jacob Zuma, it’s highly unlikely that the trajectory is going to be different after December,” he said.

The party was rudderless, with too many plans for the future – Deputy President Cyril Ramaphosa’s recently-announced New Deal, the New Growth Path, the industrial IPAP (Industrial Policy Action Plan) and the National Development Plan – but did not have a united vision.

What if Zuma were not removed after the ANC’s December conference, presenter Katy Katopodis, editor-in-chief of EWN, asked.

“The situation will be worse, but at the same time it will help the opposition parties,” Holomisa said.

Different sectors of society should get involved in discussions about issues of land and the economy. “We need to pull up our socks and defend our country. That’s why the UDM has been calling for a national convention where we can meet different sectors of our society.”

Such a convention would “look at the road we have travelled” since 1994, and fix any inherent defects.

Holomisa has been planning this convention for what feels like forever, but told Katopodis he was aiming to get it together in March or April 2018.

There’s already a draft problem statement and all opposition parties have already bought into this convention.

Gasa made the point that many countries that have experienced State Capture in the way South Africa has take a long time to recover.

“When you start making the connections [on State Capture] you realise this is a worm, and this worm will take a long time to undo. But people must go to jail,” she said. “There was a time when I thought President Zuma could leave peacefully, but we have long passed that time. He must wear an orange overall,” she said to applause.

She said money was taken from the poor and bad appointments were made. “If the ANC is serious, they must remove the president and remove themselves,” she said, citing the lack of institutions for the mentally ill in the Eastern Cape, on top of the Life Esidimeni crisis, as examples of the “level of rot, the inhumanity” that a lack of oversight brought.

Pityana added that the state was stealing from the poor, and that the ANC didn’t get it. These leaders needed to retire. “We need to find new direction that is innovating. The only reason [it isn’t] is that we’re in a rut.”

Katopodis asked the panel whether people had lost faith in politicians. Holomisa, as Member of Parliament, obviously first made light of it. “It’s possible they have, but why do they keep voting for politicians,” he joked, adding that a highly trained civil service was what was needed, rather than the deployment of people based on party membership.

He said an opposition coalition on national level, similar to what was happening in some municipalities, would mean “the checks and balances are already in place” for an accountable government.

Pityana, however, had less faith in politicians. “The moment has come where people should put politicians in their place,” he said. “They are not our bosses, they are our servants.”

People needed to remove politicians who were not doing their jobs.

Some interesting questions came from the audience. Someone in Economic Freedom Front gear asked what about economic democratisation, after the political freedom achieved. “Are we [merely] a state away from Europe?” he asked.

Holomisa said government should do more, Pityana said it was all in the plan passed by Nelson Mandela after 1994. He believed transformation in the mining industry, which he is in, “is a societal imperative”, but not of the type that minerals and resources minister Mosebenzi Zwane was pursuing.

The Constitution wasn’t without shortcomings, but it did offer “a great deal of tools” to confront inequality, he said.

Another person asked if the anti-Zuma marches were not just some kind of corporate social investment programme that businesses did instead of helping to address the real problems of economic inequality.

One of the most passionate contributions of the session came from a woman in the audience, a former activist, who stood up and said: “The best thing we can do is rise.”

She said: “Let’s not let people be counted as black and white on the marches. Let’s forge forward. We don’t talk as South Africans any more, that’s why the enemy which tells us we are black and we are white is managing to forge this segregation. I hate it when people are making us talk about this.”

She said that in 2017 there were more important things to fight than apartheid. Pointing to a crowd with EFF T-shirts, she said: “It is an indictment on me as their mother that they should be fighting about economic freedom now.” DM