The Gathering: Manyi, Abedian and Pauw – Hollowing out of state institutions and hollow statements 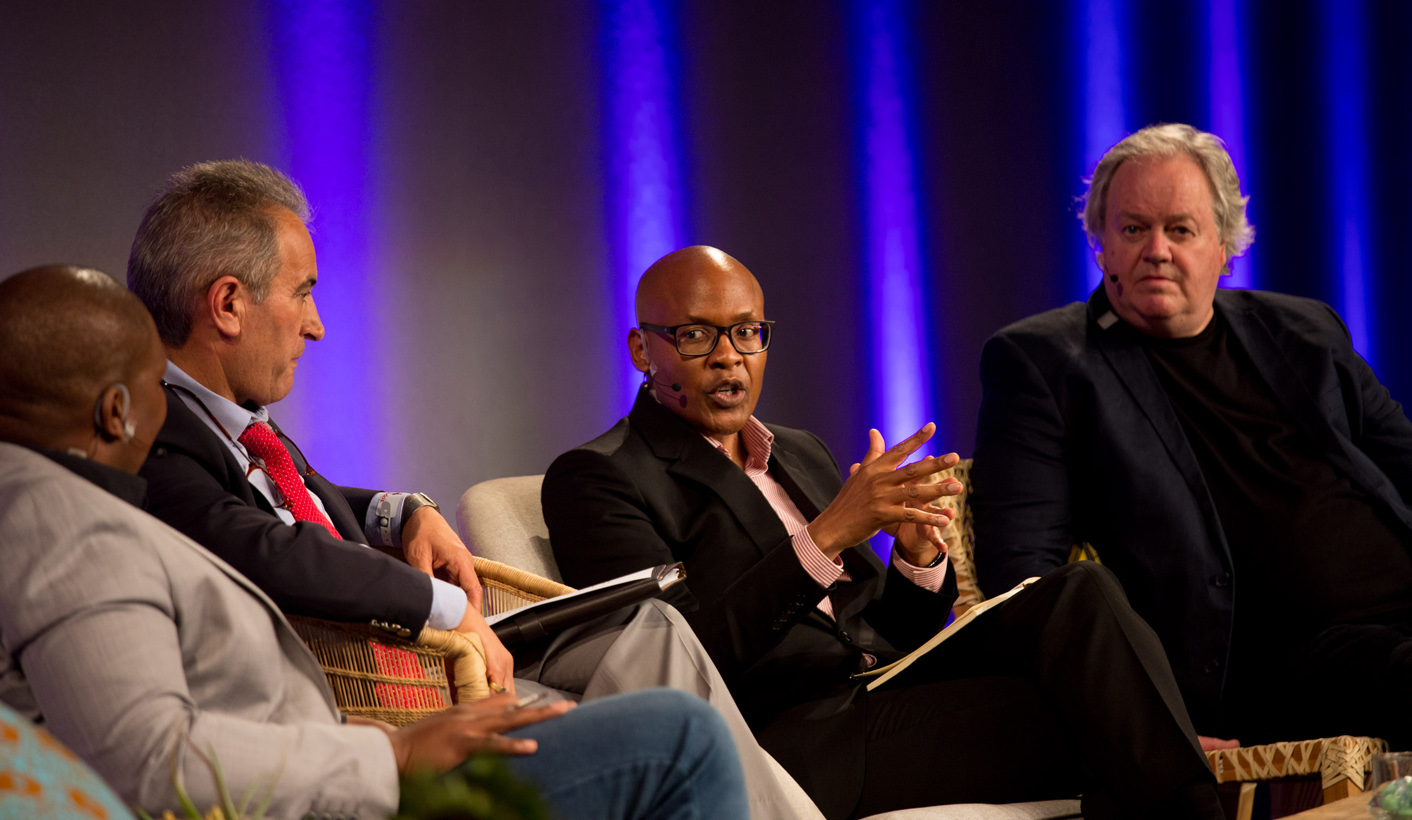 South Africa faces crises on multiple fronts. What’s its biggest problem? This question was put to Mzwanele Manyi, Jacques Pauw and Iraj Abedian at The Gathering on Thursday. By GREG NICOLSON.

“Things are not where they should be,” admitted ANN7 and The New Age boss Mzwanele Manyi at The Gathering in Sandton on Thursday while in debate with The President’s Keepers author Jacques Pauw and economist Iraj Abedian. That was the only admission he was willing to make on the current government’s contribution to South Africa’s challenges. He added: “It would be very superficial to characterise this as a President Zuma issue.”

Manyi, Pauw and Abedian were each asked what are the biggest threats facing the country. Pauw expanded on his hit book, The President’s Keepers, exposing the hollowing out of state institutions. Abedian spoke on the economy. Manyi did Manyi. Abedian went first.

“It seems to me in almost eight years we have undermined the structure of our economy and we’re doing it here daily. We see ministers do it. We see businesses doing it. We see lawyers doing it. We see accountants doing it,” opened Abedian, saying it will take years to fix. “We are not paying attention to our economy.” He said words like “auditor” and “minister” are no longer respected and as society’s fundamental values are destroyed, so is the economy.

Manyi jumped in. Three ANC presidential candidates withdrew from the event this week. Manyi said it was a problem that the ANC was not represented and claimed that invitations to ANC candidates need to go through Secretary-General Gwede Mantashe’s office. Then he took the conversation back to democracy’s foundations.

“The problem first happened in Codesa [the Convention for a Democratic South Africa]. Codesa was about everything else but the transformation of the economy. That is the problem,” he said. “The Constitution that everybody is so passionate about is actually, in my view, is one of the contributing factors today to the kind of turmoil we are having in this country.

“If you’re a black business person in this country, the policies are not favouring you. They favour the entrenched white minority capital,” Manyi continued, calling President Jacob Zuma a “saviour” for pursuing radical economic transformation. The compromises agreed to at Codesa are often criticised for causing the country’s current failures, but Manyi, whose company Lodidox recently took over ANN7 and The New Age from the Gupta family, used the issues to deflect rather than reflect.

Pauw said public institutions of justice have been destroyed – the Hawks, NPA, SARS, Crime Intelligence. “These institutions are in complete disarray and I think that’s the biggest problem we face at the moment: these institutions have to be rebuilt.”

He used the example of SARS. It used to have five investigative units targeting crime syndicates and big business but amid false claims of a “rogue unit” Commissioner Tom Moyane closed all five. “Those investigations are dead,” he said. “We must have the only revenue service in the world that doesn’t have an investigative capacity.”

“Where’s the investigations into the looters of Prasa and Eskom and Denel and the State-owned Enterprises?” asked Pauw. He wouldn’t lay the sole blame on Zuma, but said there are no investigations because institutions have been hollowed out by Zuma and his allies.

The mention of SARS got Manyi going. On multiple occasions, he accused his fellow panellists of being selective and hypocritical in their criticism. He claimed there was a rogue unit – Pauw assured him there was not – and said the government in the early ‘90s set the country’s financial policies on the wrong course, especially with the Public Finance Management Act (PFMA).

“Check your facts,” said Abedian, touching Manyi’s arm. Abedian was in government when the PFMA was enacted, which wasn’t anywhere near the same time Manyi said it was. Abedian tried to reason with Manyi and said we must fight white minority capital and corrupt corporates, but cannot allow others to loot the state in the meantime (the Gupta family wasn’t touched on).

Out of his depth on facts, Manyi reverted to slogans as he continued to criticise Zuma’s critics and stuck to his thesis: “People talk about capture where in fact the biggest capture happened in 1994.”

Like all populists, some of his points resonate. But like many state institutions, he proved hollow, symbolising levels of debate in some quarters.

Photo: Mzwanele Manyi greets Iraj Abedian at the start of the panel discussion on the biggest threats facing South Africa, at The Gathering. Photo: Daniel Born