The Gathering: Africa needs to learn to pass the baton...

The Gathering: Africa needs to learn to pass the baton – Tendai Biti 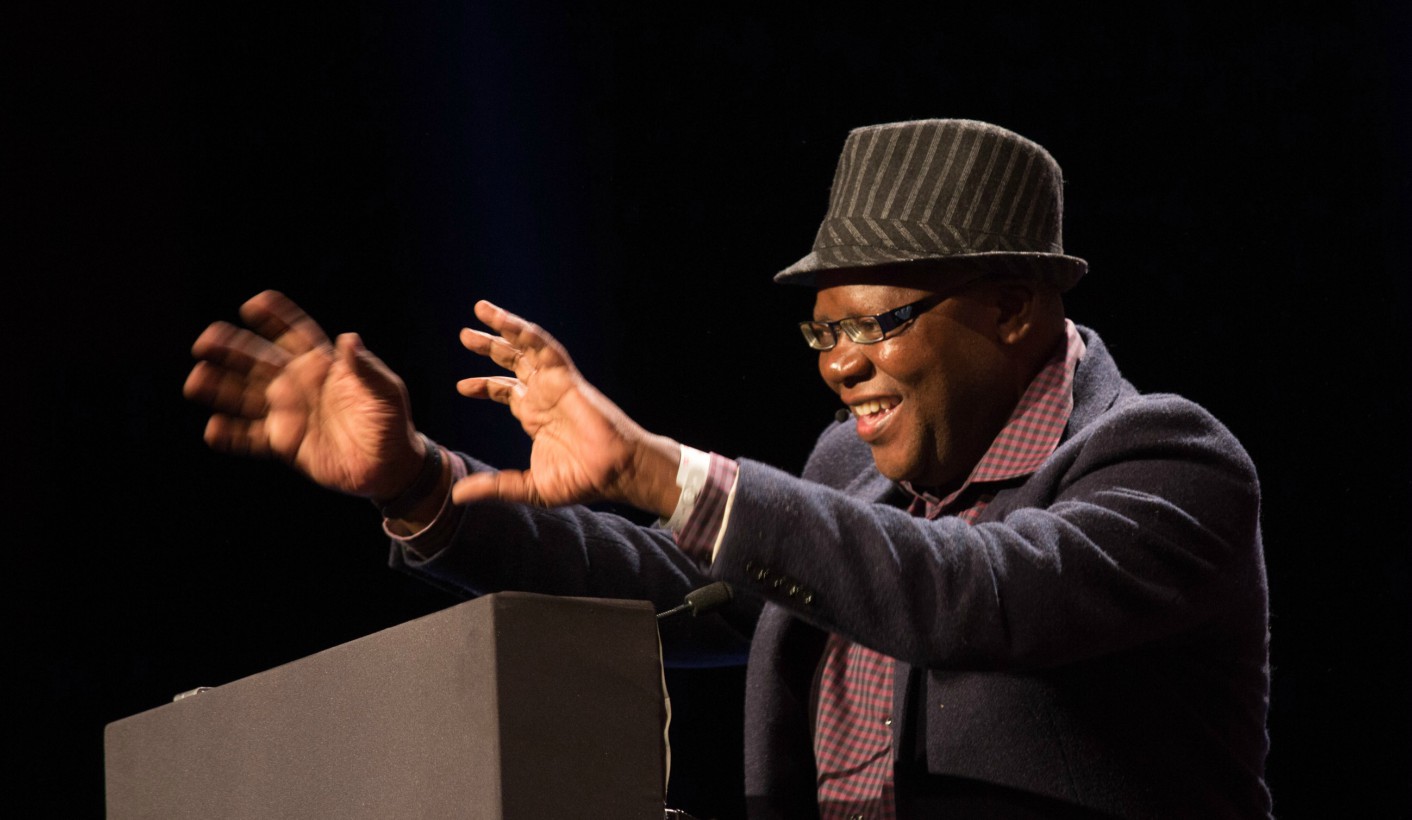 Former Zimbabwean finance minister Tendai Biti has called what has happened in Zimbabwe in the past week “for all intents and purposes a military coup”, but it was also “something unique”. He also had a message for South Africans: Zimbabwe also matters here. By CARIEN DU PLESSIS.

Tendai Biti has been out of government for four years and living in Harare where he’s been practising as a lawyer, but he – and his Twitter account, @bititendai – has been very much in the public eye, still.

Two days after Robert Mugabe’s forced resignation as Zimbabwe’s president on Tuesday, the opposition politician, with his characteristic top hat, was on stage at The Gathering, musing about the “momentous period” in Zimbabwe’s history. He was slightly frazzled about the water crisis in Sandton where the event took place – a leak meant that large parts of Johannesburg had been without water for a couple of days. “I think they took away the water when I came here. I imported Zimbabwe’s challenges,” he joked. A nervous giggle sounded from the audience, perhaps also because warnings of South Africa becoming a second Zimbabwe have been sounding ever since a democratic government was installed in 1994.

Then Biti jumped straight in: “We are going through a very serious experience in our lives at the moment, an experience of a military intervention, which was described as pacification, but which, for all intents and purposes, is a military coup.”

The audience whistled. Zimbabwean leaders, especially the military, have been coy to call it such because of the political implications this could have – also for the ambitious Emmerson Mnangagwa who will be sworn in as caretaker president on Friday.

“We didn’t think (these serious events) would happen in our lifetime, which is the removal of Robert Mugabe, and his resignation,” Biti said.

He served up some history and even threw in a sexist aside to Zimbabwe’s own “Black Friday”, on 14 November 1997, when the country’s currency went into a massive decline, marking the beginning of the economic decline.

“I know the women in the room are excited about Black Friday,” he said, in reference to the pre-Christmas shopping sale day the next day. The audience kind of laughed.

Biti explained how strange it was for the military to force Mugabe’s resignation. “It was strange to see tanks on the streets, and soldiers addressing us on television.” But he warned that it could happen again once the genie was out of the bottle.

Zimbabwe remained a security state after independence in 1980, when the guerrilla movement failed to demilitarise. The ruling party and the state’s interests became conflated, and the head of state was a mere “normative representative of this military order”.

What happened last week “was a recall of someone no longer acting in the interests of the securocratic state,” he said. Multiple crises – of the economy, unemployment, and generations – converged, creating “this amazing moment of state vulnerability and state fragility”.

The crisis was now the opposite, he said, with a shortage of money and a “surrogate currency” called the bond note.

Moving from one crisis to another, “I have to phone my friend (US economist and Nobel Memorial Prize winner) Jo Stiglitz to say, find a new terminology for this,” he joked.

The other crisis is that 69% of the population is below 35, and the labour market could only absorb 5% of the graduates. There’s a crisis of services too, that mothers were dying in hospitals when giving birth.

But “the ultimate breaking point came and was invited by the persona of Mrs Grace Mugabe. You have this amazing woman who is totally disagreeable”.

She brought emphasis to the idea that nobody was legitimate unless they fought in the liberation war over 37 years ago. That excluded a lot of people who were born after.

“The problem with Africa is we can’t pass the baton stick. Kenya, Ethiopia, Morocco, they are all good at running but we don’t do well on short distances,” he said.

Looking to the changes that are needed in Zimbabwe, he said the dominant power of coercion, violence, corruption and capture should not continue in the country.

“The normal discourse in all democratic countries, the normal course of power is persuasion, but in Zimbabwe persuasion doesn’t exist.”

He said the people who marched for Mugabe to go on Saturday 18 November, “didn’t march to resolve the internal succession issues in Zimbabwe (Zanu-PF), they marched for a new Zimbabwe, a new beginning to give their children and grand a new start”.

To President Jacob Zuma, ANC secretary general Gwede Mantashe, “this isn’t a domestic issue, this is a South African issue”. The outside world should get involved, he said.

He had scathing words for the Southern African Development Community that “disengaged” with Zimbabwe after its special summit on the country in Lesotho in 2013.

Biti’s speech accelerated even more when he gave a 10-point plan for the “transitional process” that should happen in Zimbabwe. This included nation-building, institutional reform, economic reform, moving away from being a securocratic state, and re-building relations with countries that could help the country revive its economy.

Mugabe should be left to retire in peace, he said.

He was optimistic: “We have removed the baobab called Robert Mugabe, it will be replaced by an acacia tree, and it must never allowed to be a baobab again.”

In the question and answer session, Biti had a message for presenter Stephen Grootes about South Africa: “You guys don’t know what you have!” But he warned, South Africans must not cross the Limpopo, they must protect their democratic institutions – and not become Zimbabwe.

“We are not celebrating a new era, we celebrated the fact that Robert Mugabe is gone. You don’t know what it is like to live with a dictator. He lives under your skin, he gets into your underwear.”

For now, we are glad that Robert Mugabe and his beautiful wife and his well-behaved children are gone, he said, with more than just a hint of irony. DM

Photo: Tendai Biti, former Zimbabwean finance minister, spoke about the economic, social and political crises facing Zimbabwe. ‘You cannot kill a rat and eat an elephant,’ he said. ‘The ultimate breaking point came from the persona of Grace Mugabe. You had this amazing woman who is totally disagreeable, whose moral stability is totally questionable.’ Photo: Daniel Born