ISS Today: The dark art of the coup 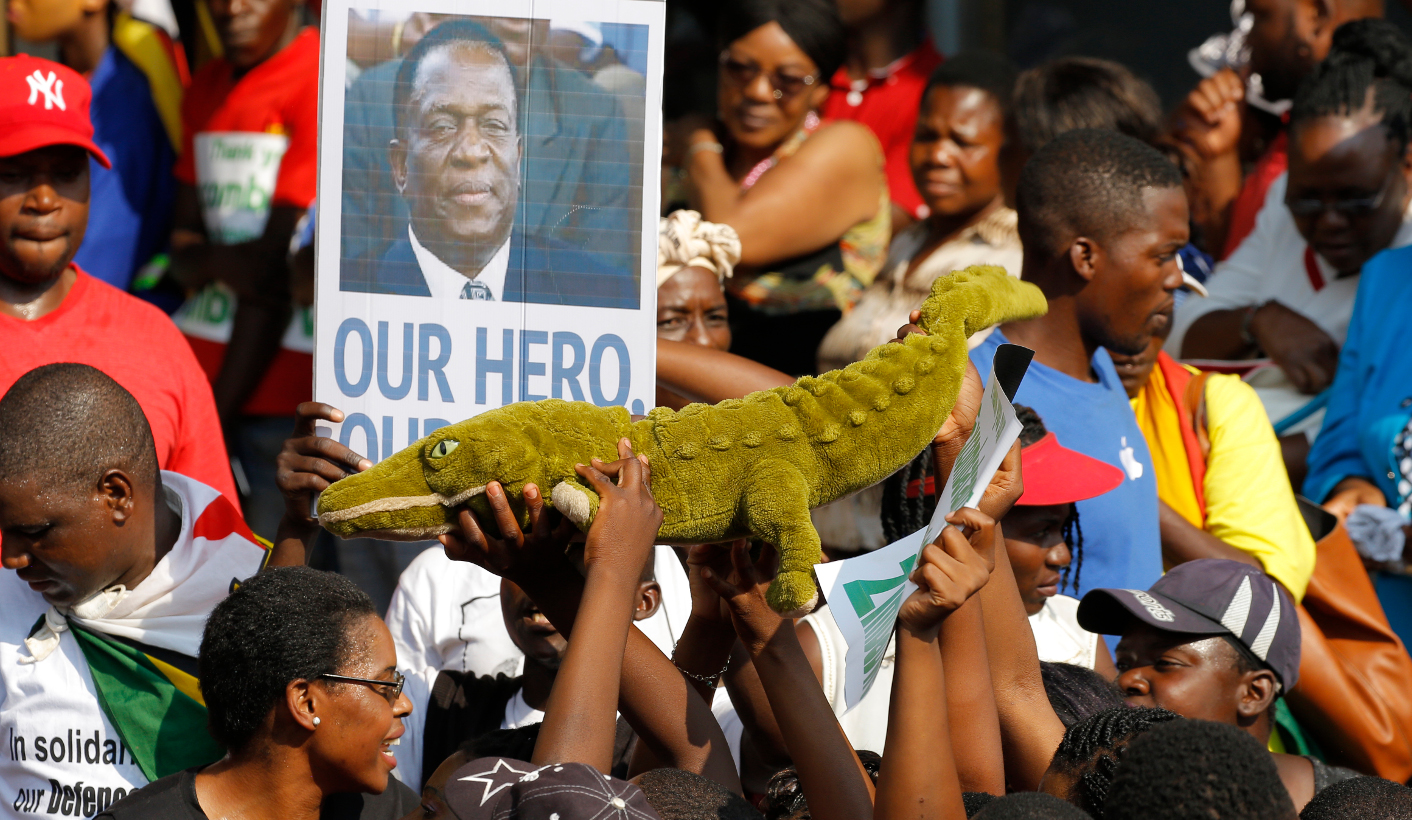 After Zimbabwe’s cleverly contrived coup, squeezing the genie of democracy back into the bottle won’t be easy. By Peter Fabricius for ISS TODAY.

It was the most remarkably eventful week in Zimbabwean politics since independence in 1980. It started with the military seizing control on Tuesday night, 14 November, and ended on Tuesday night, 21 November, with Robert Mugabe resigning after 37 years as president.

And yet it unfolded almost in slow motion. The army could easily have stormed into Mugabe’s residence and dragged him off to jail – or worse, installed itself in power on Day One.

Instead the army (or probably axed vice president Emmerson Mnangagwa, pulling its strings from the wings) stage-managed an elaborate fiction. Operation Restore Legacy was not in fact a coup but just an intervention to retrieve Mugabe’s and Zanu-PF’s legacies from the ‘counter-revolutionaries’ who threatened to besmirch both – in other words from the Generation 40 (G40) faction in Zanu-PF, headed by Mugabe’s wife Grace, and bitterly opposed to Mnangagwa.

Maintaining that illusion – when armoured vehicles guarded street corners in Harare, Mugabe was effectively under house arrest and many G40 cabinet ministers had been arrested or had fled – was no mean feat.

But Zimbabwe Defence Forces chief Constantino Chiwenga was helped in this conjuring trick, astonishingly, by none other than Mugabe himself. When the envoys of the Southern African Development Community (SADC) met him and Chiwenga in Mugabe’s official residence last week – just a few hours after the army had to all intents and purposes toppled him from power – Mugabe could have screamed “Help!”

But he didn’t, according to South Africa’s Defence Minister Nosiviwe Mapisa-Nqakula. South African President Jacob Zuma, in his capacity as SADC chairperson, had sent her and State Security Minister Bongani Bongo to Harare as SADC envoys to assess the “coup” and perhaps to mediate.

Mapisa-Nqakula told Radio 702 that she and Bongo tried to figure out what was going on. “Well, according to Mugabe, nothing; he’s happy,” she said. “And of course as we are able to see, he was able to drive from his house to the State House. And there are no challenges in Zimbabwe. And if there are any challenges, he expects the people of Zimbabwe would raise those challenges with him, so he can find a solution.”

That rather bizarre response from Mugabe – which sprung either from deep pride or perhaps incipient dementia – seemed to neutralise SADC’s attempts to intervene. Mapisa-Nqakula and Bongo had evidently come to Harare with SADC’s rulebook in their back pockets. It demands the suspension of any government that seizes power by unconstitutional means – and military coups very definitely fall into that category.

But as one South African official pertinently asked: ‘How do you say that there has been a coup when the elected head of state himself says he is still in power?’

Good question. But was that just a ruse, an excuse for Pretoria and the region to turn a blind eye to the “coup”? Some officials did admit they were happy to see the back of the ever-troublesome Mugabe. Yet they also insisted that a military coup was not the way to get rid of him because it would create a bad precedent. “What if the Mozambique or Angolan military decide to intervene in support of one side in the ruling party?” one asked pertinently.

Whatever one might think of coups in principle, one would have to concede that this one was artfully contrived and executed. With minimal bloodshed and destruction, it removed a major impediment to Zimbabwe’s development. Mnangagwa and the generals cleverly showed SADC and the world the smiling face of Operation Restore Legacy to avoid regional sanctions, while showing the ruling Zanu-PF the hard reality that power had shifted from the G40 faction to the Lacoste faction headed by Mnangagwa. The G40 faction was planning for Grace Mugabe to succeed her husband.

After that, the generals could really just sit back and watch as the Zanu-PF opportunists stampeded from G40 to Lacoste and then launched an impeachment process. It was only when that impeachment debate was already under way in Parliament that Mugabe tendered his resignation, under section 96 of the constitution.

So in the end the “coup” was given the imprimatur of a constitutional change of power. Zuma and SADC security organ chairperson and Angolan President João Lourenço, who were due in Harare on Wednesday with a SADC mandate to “to assess the situation”, cancelled their visit. There was nothing left to assess.

Operation Restore Legacy had left SADC looking even more helpless and useless than before, as a mere spectator to one of the most historical political events in the region in many years. Most Zimbabweans were happy the two presidents weren’t coming. They feel SADC abandoned them to the mercies of Mugabe for many years and only showed concern when he was being toppled. Zimbabweans feel they got rid of Mugabe on their own and want to continue going it alone from here.

Many opposition figures seem to be counting on Mnangagwa forming a genuine, power-sharing government of national unity to run Zimbabwe until the next elections. He might feel that’s what he requires to win the international support he’ll need to revive Zimbabwe’s crippled economy.

However former Movement for Democratic Change senator David Coltart suspects that Mnangagwa will dispense with such a formal arrangement and will at most bring a few people from outside Zanu-PF into his cabinet to make it look more representative. The two MDC leaders Morgan Tsvangirai and Welshman Ncube, the finance minister in the 2009-13 government Tendai Biti and former vice president Joice Mujuru all come to mind. They would probably want guarantees of a real say in the transitional government before accepting positions.

More important, Coltart says, is that international creditors and donors should make their support conditional on the constitution being fully respected and implemented to ensure the next elections are truly free and fair.

The United States seems to be key here as it still has considerable leverage. Others have dropped their sanctions but the Zimbabwe Democracy and Economic Recovery Act sets out strict conditions for America to lift targeted sanctions and provide debt relief. This includes through vital international financial institutions such as the World Bank and International Monetary Fund.

Mnangagwa and Chiwenga, specifically, are still among about 200 individuals and entities on the US sanctions list. “To have their assets unfrozen and their ban on doing business with Americans lifted, they will need to convince US officials that they are no longer undermining democracy and the rule of law,” former deputy US assistant secretary of state for Africa Todd Moss writes in Foreign Policy.

Free and fair elections are nevertheless going to be a big ask from Mnangagwa and the generals who played key roles in helping Mugabe to steal past polls. Perhaps riding on a crest of popularity after getting rid of Mugabe, they won’t even need to rig the next poll.

But they need to be wary that in toppling Mugabe, they also let the genie of democracy out the bottle, propelled by euphoria. Trying to squeeze it back in may not be easy and could provoke serious clashes with an emboldened electorate. DM

Peter Fabricius is and ISS Consultant