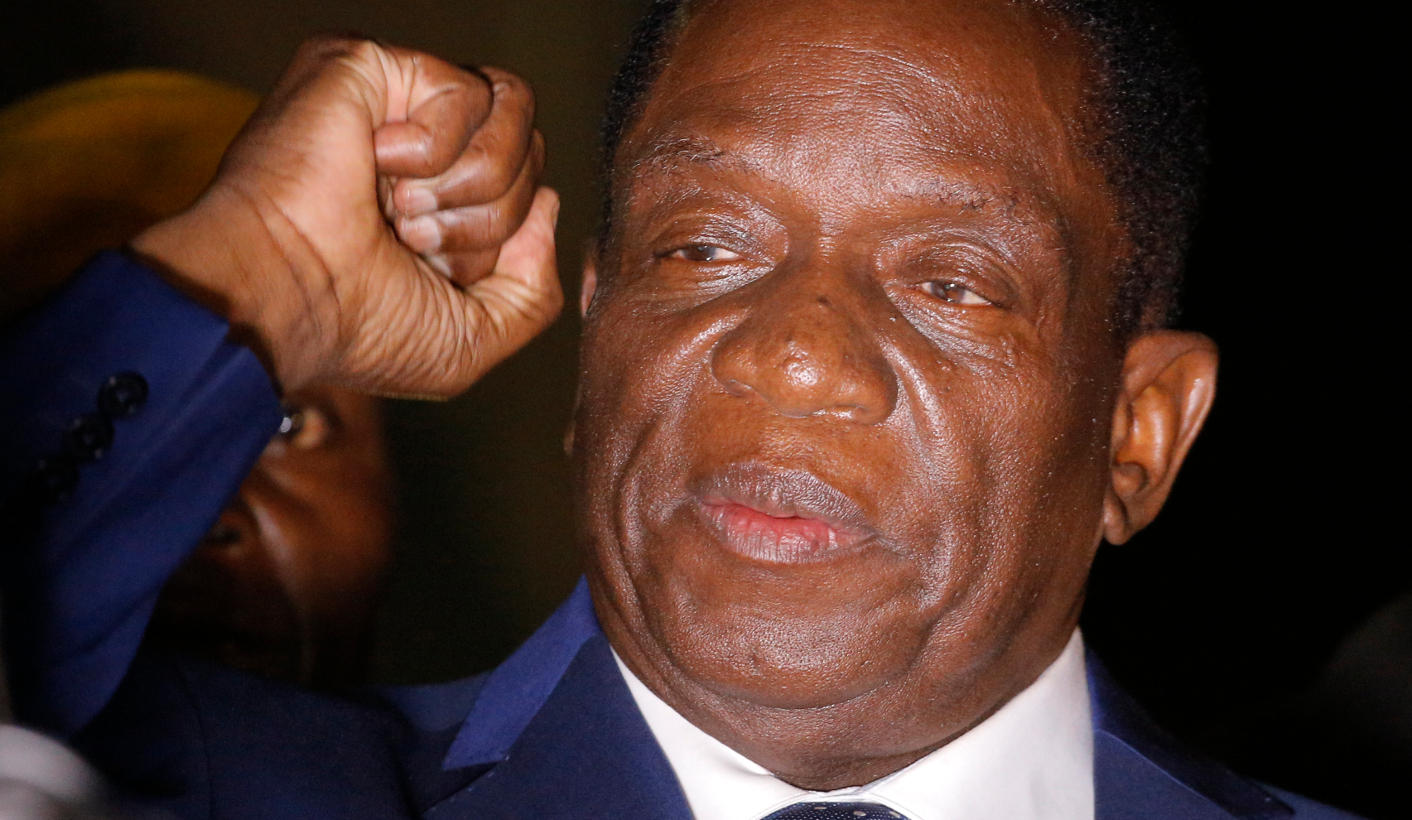 Zimbabwe’s incoming president, Emmerson Mnangagwa, made a debut appearance and address at his ruling Zanu-PF headquarters in Harare on Wednesday evening, exactly 16 days after he was fired and forced to flee. By MAYNARD MANYOWA and AFP.

All patriotic Zimbabweans should come together to ensure prosperity. This was how soon to be inaugurated Emmerson Mnangagwa greeted thousands of supporters who arrived at the Zanu-PF headquarters to welcome him back to Zimbabwe.

“We want to grow our economy, we want jobs… all patriotic Zimbabweans (should) come together, work together,” he said.

Mnangagwa, whose whereabouts remained unknown since he was fired by Mugabe, arrived in the country late in the afternoon via an army airbase, as the military maintains tight security around him, following two assassination attempts which he confirmed in his address.

It was his first public speech since Mugabe fired him on 6 November over a succession tussle with the former first lady, a move that prompted the military’s intervention to force Mugabe from power, leading to his resignation on Tuesday.

Mnangagwa appeared to rapturous applause, cheers and dance, from thousands of supporters across the political divide, who all thronged the venue.

He was surrounded by a large security detail and arrived at the headquarters of the ruling Zanu-PF party in a presidential-style motorcade.

Two young men held a stuffed crocodile above their heads, a reference to Mnangagwa’s nickname, earned for his reputation for stealth and ruthlessness.

He began his address in sombre fashion.

“Exactly 16 days ago I received a letter informing me of my firing from the government of Zimbabwe… two hours later I was informed of plans to eliminate me,” he said, appearing to be close to tears.

Mnangagwa added that given the nature of the assassination attempt on 12 August, which ended up with him being airlifted to South Africa, he took the threat seriously and fled.

Mnangagwa thanked the people who had gathered.

“To the people of Zimbabwe, you gathered here, may I say in the name of our Lord, may I say thank you for receiving me,” he said, adding that he felt humbled that people waited hours just to see him. He also thanked the army, and told those gathered that he was in constant contact with the service chiefs during the entire time he was in exile.

Towards the end of his speech Mnangagwa broke ranks with his previous culture of silence and thanked Zimbabweans for helping end a dictatorship.

Speaking in vernacular language, he bemoaned the lies about him that were spread, but laughed at Grace Mugabe who once boasted that she would crush the snake’s head, in supposed reference to him, asking, “Whose head has been crushed now?”

But it was the messages in the middle of his speech that perhaps offered much encouragement. Mnangagwa spoke of the need for business to flourish, for development, for economic revival and jobs.

He told crowds they were witnessing “unfolding and full democracy”.

He spoke about the need for support from the South African Development Committee region, from the continental bloc, the African Union, and from the international community.

He made reference to a letter that he wrote to President Mugabe on Monday, a day after Mugabe addressed the nation through a TV broadcast. Mnangagwa told supporters that he had reminded the former president that he has always said he would quit when the people told him to.

In the letter, Mnangagwa told Mugabe that he would not entertain any talks that drifted from the will of the people. He was talking about the thousands of people who flooded the streets demanding Robert Mugabe resign.

“Great speech all round, can’t describe how I felt seeing him after what he went through. All I want is job creation,” said Remigio Mutero, 30, an unemployed IT graduate.

Mugabe’s iron grip ended on Tuesday in a shock announcement to parliament, where MPs had convened to impeach the 93-year-old leader who dominated every aspect of Zimbabwean public life for decades.

Mnangagwa will be sworn as president of Zimbabwe on Friday. DM