Zimbabwe: Change is in the air in, but so is uncertainty 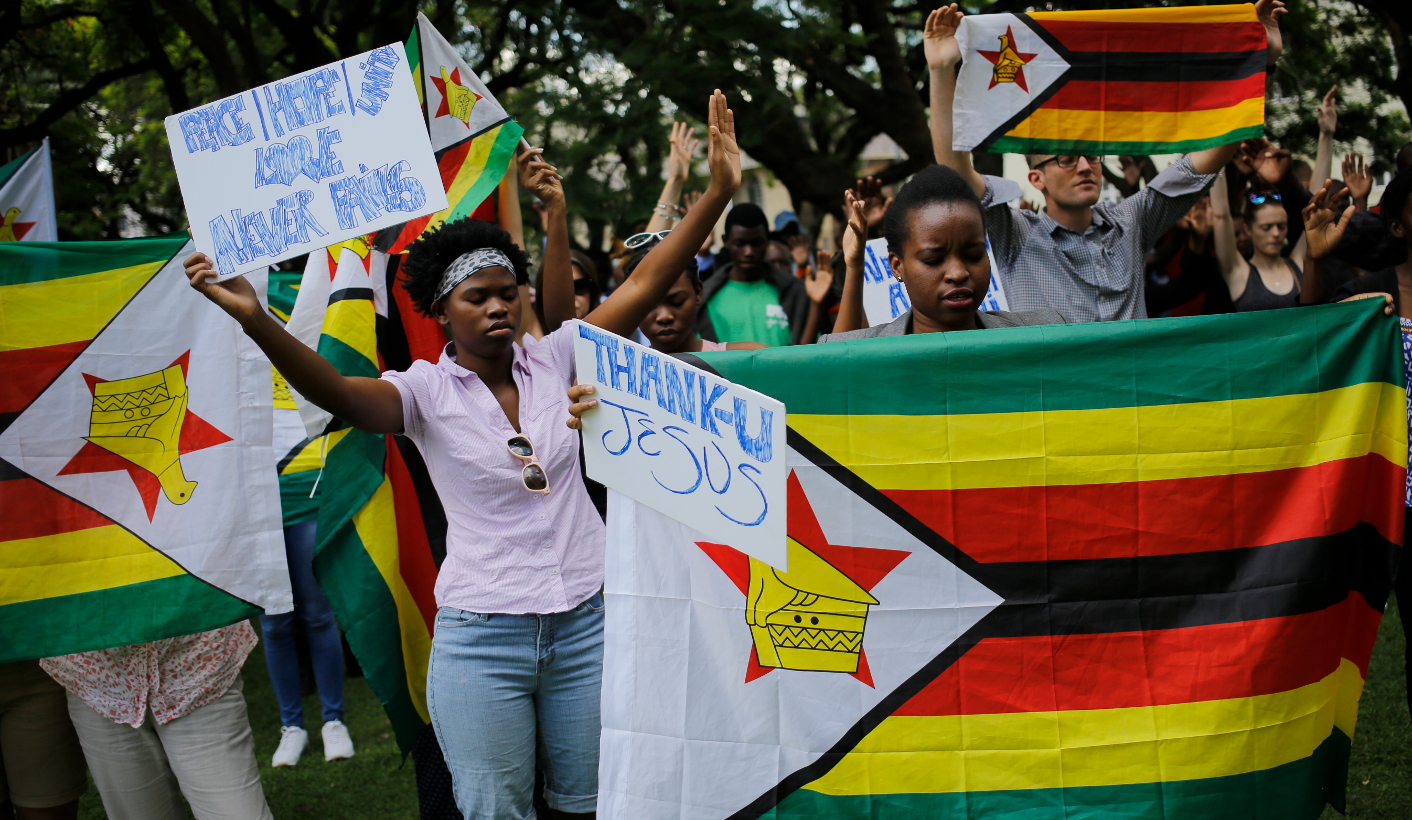 Lawmakers from the two biggest parties in Zimbabwe, the ruling Zanu-PF party now led by Emmerson Mnangagwa, and the Movement for Democratic Change (T) led by opposition figure Morgan Tsvangirai, are set to get Robert Mugabe impeached in proceedings set to begin on Tuesday, amid suggestions that the veteran leader is plotting a comeback. By MAYNARD MANYOWA.

On Sunday, Robert Mugabe’s party Zanu-PF demoted him from first secretary and president to an ordinary card-carrying member. The party’s central committee, which made the decision, also resolved to symbolically recall Mugabe, in a scenario reminiscent of South Africa’s ruling ANC recalling Thabo Mbeki in September 2008.

After the demotion, Zanu-PF gave Mugabe a 24-hour ultimatum to either “resign or be impeached”.

Later on Sunday, Mugabe appeared on state television for what was widely expected to be an announcement of his resignation. This did not happen, and instead Mugabe gave an indication that he expected to be presiding over the party’s congress in December, which has only added to immense confusion.

Mugabe’s deadline expired at noon on Monday and with no sign of a resignation by the statesman, the party’s chief whip Lovemore Matuke submitted a motion to the Zimbabwean Parliament to have Mugabe impeached.

The motion, in part, read: “Gravely concerned that the President has become the country’s source of instability by his indiscriminate and continuous dismissal of members of his cabinet including 2 Vice Presidents in the past 4 years on allegations of plotting to assassinate him and forcibly take over power.”

Matuke also specifically mentioned the conduct of Mugabe’s appointees, and the involvement of his wife Grace in matters of governance as the reason for the impeachment.

He wrote: “Alarmed that the president has abrogated his constitutional mandate to his wife who makes public utterances on issues of government like the appointing and dismissal of Government Ministers and senior civil servants.”

Matuke called “upon this House to cause the removal of the President from office in light of the above and that voting in the motion of No Confidence in the President be by secret ballot,” under section 97 (1) of the constitution of the country.

Zanu-PF deputy legal secretary Paul Mangwana confirmed to Zimbabwean news agency Pindula that the motion to impeach President Robert Mugabe was going to be presented on Tuesday in Parliament.

But it is not “sealed yet”. Mangwana added that Zanu-PF would need opposition members of parliament to vote for the motion for it to succeed.

“We need 125 votes from Zanu-PF and 73 from MDC-T for the motion to succeed. We need the support of the MDC because our own MPs aligned to the G40 cabal may not vote for the motion,” he said.

The MDC-T indicated that it would support the motion but said it would not be used to as a pawn in Zanu -F succession battles, especially since Zanu-PF Ministers Obert Mpofu and Patrick Chinamasa said the “new” Zanu-PF would not entertain ideas of a coalition, or government of national unity, with opposition parties.

But the potential success of an impeachment has generated anxiety.

Zanu-PF lawmaker, Justice Mayor Wadyajena, told Daily Maverick that the process of impeachment would normally take three months but lawmakers would attempt to speed up the process.

“We will try to fast-track the process. The house has to be divided first. It’s a three-stage process.”

Wadyajena confirmed that the motion had been submitted and would be tabled and debated in parliament on Tuesday.

“It will be debated maybe tomorrow, and then voting on Wednesday. The process will likely be completed by next week. But maybe if we can speed it up by Thursday it will be set.”

Writing on his blog, law lecturer and former adviser to the Prime Minister of Zimbabwe, Alex Magaisa, described in depth the complexities of an impeachment, as well as the three stages mentioned by Wadyajena.

Magaisa disputes Wadyajena’s stance that this could be completed within a week. Triggering an investigation might be easy, but the process of investigating the president and returning for a second motion cannot be achieved in a day, nor weeks.

He adds that the investigations themselves would need to gather real evidence which the current president cannot successfully challenge in a court of law.

It may explain why Mugabe refused to resign and felt confident of outmanoeuvring the military.

“The implications of all this are that this may well take more time than is being suggested. It could go on until and beyond the Zanu-PF Congress in December. Mugabe could therefore use these constitutional and legal safeguards to buy more time until the end of his term next year by which time the question of impeachment could well be an academic exercise,” adds Magaisa.

Magaisa’s closing statement probably illustrates the difficulty of the task the lawmakers face.

“The impeachment proceedings will be a political humiliation for Mugabe, but it is also important to keep public expectations in check.”

It probably explains the renewed confidence that several members of the expelled G40 faction have shown.

Kingpin and key strategist Jonathan Moyo briefly reappeared on Twitter, sending a message that he and at least 50 other Zanu-PF ministers, MPs and officials were well and safe in foreign lands, before deleting the tweet.

The length of the process of impeachment and the potential of opposition MPs sitting out a Zanu-PF succession battle have dampened the atmosphere in Harare, replacing hope and joy seen from marches held on Saturday to despair, fear, and anxiety.

In an attempt to quell the rising despondancy, the Zimbabwean Defence Force released a statement thanking the people of Zimbabwe who took to the streets in solidarity with them.

The military stated that “they remained seized with the present operation”, and confident that they would take the country out of its current predicament and set it on its proper trajectory.

The military wrote that they had engaged in further consultations with Mugabe and agreed on a road map. The road map itself, or its terms, were not explicitly stated.

The army confirmed that contact had been made between former Vice President Mnangagwa, whose firing precipitated this crisis, and Mugabe, the president.

“The security services are encouraged by new developments which include contact between the president and the former vice president comrade Emmerson Dambudzo Mnangagwa who is expected in the country shortly,” army chief general Constantino Chiwenga said on television.

Following violence that characterised a student march held at the country’s university, the military urged students, as well as war veterans and other stakeholders, to refrain from actions that threaten peace, and property.

The statement closed by reiterating that the army was for the people – a deliberate reiteration probably aimed at making sure the ordinary citizens do not feel the army has mended ties with Mugabe.

From the day that the army issued a statement warning Zanu-PF, the trajectory has been one of twist after twist and it seems further twists lie ahead. DM

Photo: Some of the hundreds of people pray during a rally asking God for President Robert Mugabe to resign, Harare, Zimbabwe, 20 November 2017. Photo: EPA-EFE/KIM LUDBROOK