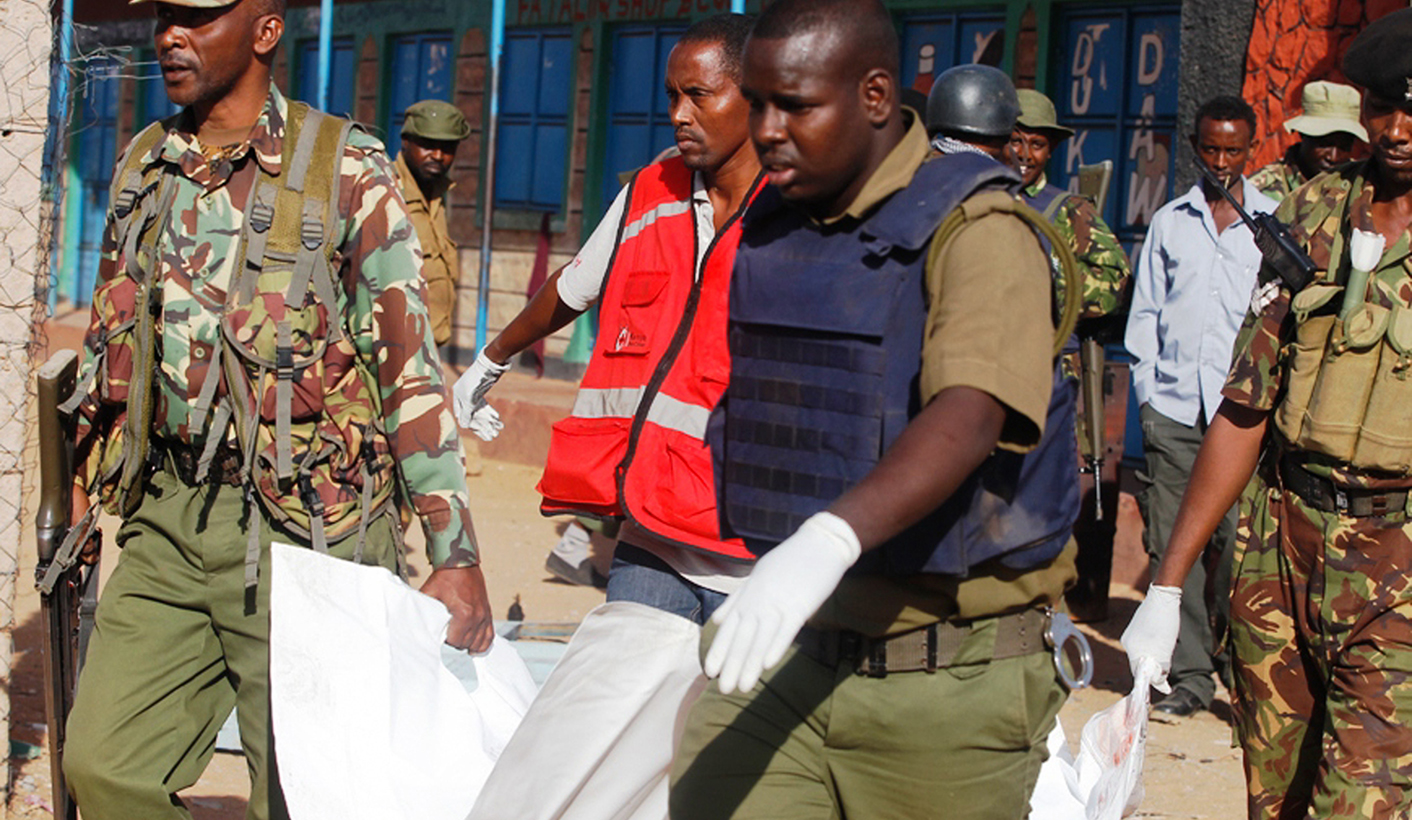 In the first of three articles on women and violent extremism, Amina’s story shows how al-Shabaab preys on the poor. By Cassidy Parker for ISS TODAY.

Her arms lie outstretched on the table before her. The next moment, she has withdrawn them, folding them in towards her body. Her eyes focus. Unfocus. Focus again. Her shoulders are hunched, her voice monotone, her attention disinterested at best, absent at worst. The dark skin of her face and hands – all that can be seen beneath her dress and hijab – are dry and ashy, as though she has been scrubbed with something coarse. Something coarse: nine years in an al-Shabaab camp in Somalia.

At 30, Amina (not her real name) appears older than her age. She was born in Majengo, in Mombasa, to a poor Muslim family who couldn’t afford to pay for her high school education. Instead, she started washing clothes to earn a living and married young.

After separating from her husband, Amina was nevertheless convinced to follow him when he disappeared without warning and ostensibly to Somalia. She was drawn not only by the hope of a reunion with him but especially by the promise of employment. She found neither. Instead, she was taken to Boni Forest, a known al-Shabaab hide-out on the border of Kenya and Somalia, and confined to an al-Shabaab camp for the next nine years. She was 21 years old at the time.

Amina is one of three women whose stories of escaping al-Shabaab camps contributed to a recent study by the Institute for Security Studies (ISS), Violent extremism in Kenya: why women are a priority. The monograph explores why and how women in Kenya become involved in violent extremism and the impact that violent extremism has on their lives, families and communities. Amina’s story highlights the ways in which al-Shabaab preys on the poor and unemployed, and throws the psychological effects of recruitment into its ranks into sharp relief.

“At the camp,” Amina says, her tone low, “I was held as a prisoner in a dark room. I was repeatedly sexually abused by up to six masked men at a time. We (all the women) were forced to use drugs by al-Shabaab, especially bugizi.

Bugizi, a combination of heroin, marijuana and Rohypnol, is widely used by al-Shabaab, together with khat, a plant endemic to the Horn of Africa that has an amphetamine-like stimulant. All of the returnees interviewed by the ISS reported that drugs were persistently forced upon them.

In the camp, Amina cooked and washed clothes, and was frequently physically and sexually abused by the fighters. They beat her if they did not like something she cooked, and threatened her life if she refused sex. Sexual violence against women is common in al-Shabaab camps, where women are recruited “to provide sex to fighters so the fighters do not think about going back home,” according to a Kenyan Anti-Terror Police Unit investigator.

Amina cannot count the number of times she has been raped. While she was forced to take contraceptives so that she didn’t fall pregnant, the men who raped her did not always use condoms and she contracted HIV. Some women did conceive and were usually given medication to make them abort, though the camp was also home to five children.

One day, her captors absent from the camp, Amina enlisted the help of a Muslim man and escaped. After nine days of hiding in the forest, she secured a series of lifts on boats bound for Kenya and was reunited with her family.

Today, Amina lives in Mombasa, where she is raising nine children, six her own and three her sister’s. She is on antiretroviral treatment and medication for tuberculosis, and her poor health frequently limits her ability to work. When she can, she continues to earn a basic living washing clothes. When she can’t, she depends on her brothers for support. In the months since her return, her financial situation, a key driver behind her recruitment by al-Shabaab in the first place, remains as tenuous as ever.

Al-Shabaab has long exploited – and contributed to – economic hardship in the Kenyan communities it targets. In areas such as Majengo and Mombasa, it has taken advantage of widespread poverty and unemployment to lure men and women into its cohorts with promises of jobs and money. While Amina did not deliberately join al-Shabaab, the loss of her husband’s income when he left for Somalia, compounded by her lack of formal education, made her vulnerable to promises of employment.

As she tries to find her financial feet, Amina says that “the government should help women returning from Somalia to set up businesses”. Some government initiatives of this kind have been set up – the Uwezo Fund, for example, aims to provide women and the youth with the skills, credit and financial assistance necessary to start small businesses. But women often find these services inaccessible, or fear the stigma that goes with them, and the initiatives go underutilised.

Since fleeing Somalia, Amina has been ostracised and stigmatised by her community in several ways. Her years in Somalia are part of the reason for this. According to a government official in Nairobi, communities often shun the wives, widows or children of men suspected of involvement in terrorist activities. The same goes for women who are recruited by al-Shabaab. The stigma Amina faces is made worse by the sexual abuse she endured. Muslim women who have had sex with men other than their husbands – even if these relations are forced – are often shamed by their communities. In this way, al-Shabaab consistently shatters social cohesion.

The psychological trauma Amina endured during her time with al-Shabaab has been compounded by the ostracism she has faced since her return. A comprehensive counselling programme would help her heal, as would initiatives that assist in alleviating stigma and building relationships in communities. To date, government efforts on both counts have proven to be inadequate and Amina is unaware of programmes that have ostensibly been put in place to support her.

More than participating in violent extremism as perpetrators, women are likely to be involved indirectly: as enablers and facilitators, as sympathisers and supporters. Even more likely, however, is that they bear the brunt of violent extremism through the loss of breadwinners and the disintegration of families; through sexual violence, psychological and emotional trauma, fear, anxiety and stigmatisation. Amina’s story is an all too typical and harrowing example. DM

Amina was one of three returnees interviewed by ISS researchers for the monograph, Violent extremism in Kenya: why women are a priority in late 2016. The research was commissioned by UN Women Kenya