Zimbabwe: A Fistful of Hours – Mugabe survives, for now 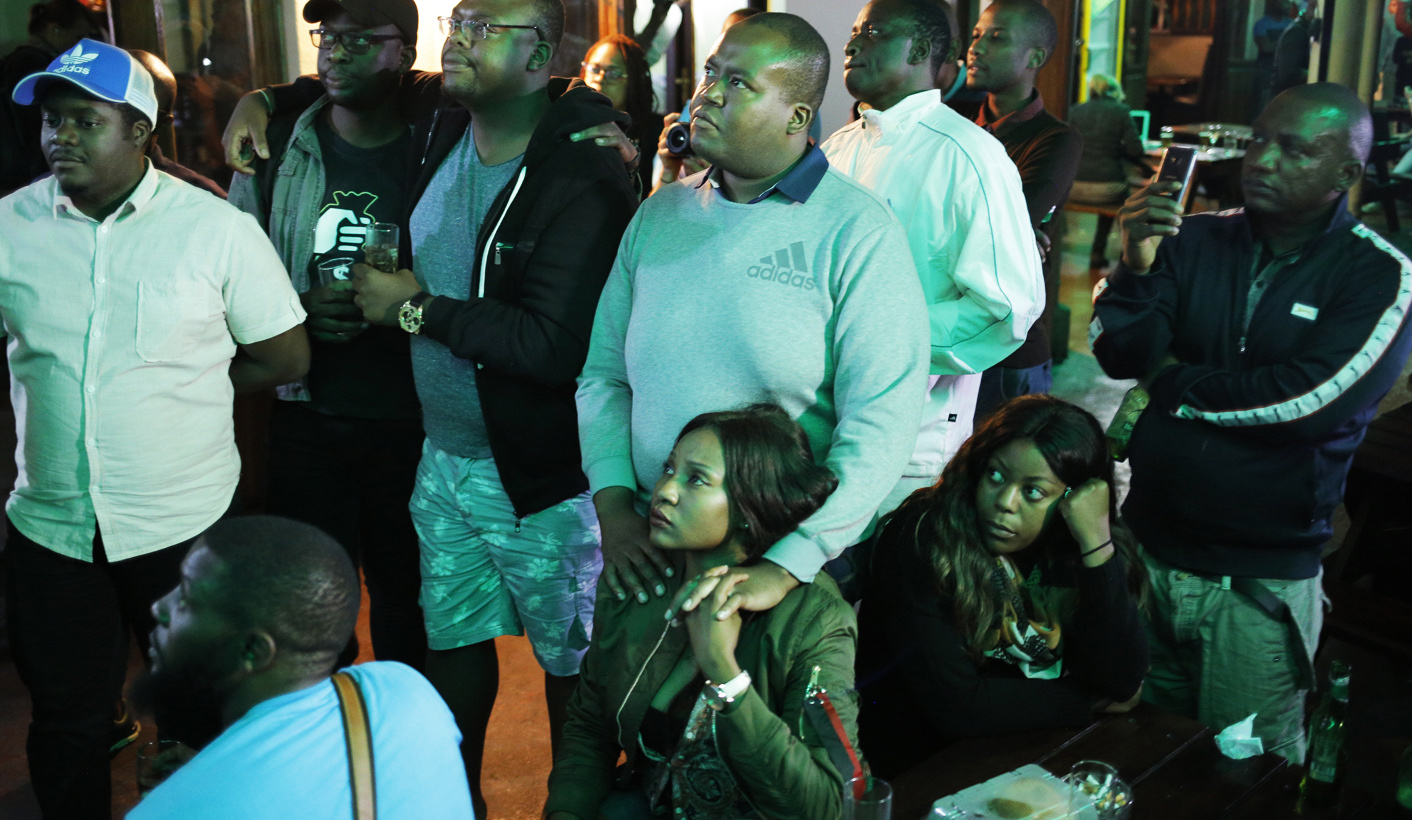 Zimbabwean President Robert Mugabe stunned his country by refusing to resign on Sunday night, despite being warned by his own ruling Zanu-PF party that he would be impeached if he did not do so. By PETER FABRICIUS.

Flanked by the generals who effectively seized power on Wednesday, Robert Mugabe went on national television to tell Zimbabweans that he would preside over Zanu-PF’s congress next month where the party’s tensions would be resolved.

That implied he would still be leader of the party at the congress. He thus appeared to completely ignore the decision earlier on Sunday by Zanu-PF’s Central Committee to remove him as leader and replace him with Emmerson Mnangagwa, whom Mugabe axed as vice president two weeks ago.

The central committee gave Mugabe until noon on Monday to resign or face impeachment in Parliament. So when it was announced that he would address the nation on Sunday night, most Zimbabweans were expecting him to announce his resignation.

Instead he gave a rambling speech calling on Zanu-PF to resolve its divisions before announcing he would preside over the congress where they would be addressed.

Opposition MDC Senator David Coltart said the speech seemed to be “typical Mugabe” in its defiance, although he also conjectured that the 93-year-old Mugabe’s suspected dementia might now be manifesting itself after the huge stresses of the last few days.

He said Mugabe’s apparent refusal to go voluntarily might ironically help the political opposition as Zanu-PF would need its vote to attain the two thirds majority of both houses of Parliament sitting together, in order to impeach Mugabe.

That might give the MDC some leverage which it could use to extract some concessions from Zanu-PF about next year’s national elections, such as a more independent state media and election administration.

Despite the apparent setback of Mugabe digging in his heels on Sunday night, the plan of Mnangagwa and the generals to get rid of him still seemed to be on track.

It has also become clear that they have outfoxed South Africa and the rest of the Southern African Development Community (SADC) in doing so.

President Jacob Zuma and fellow SADC regional leaders are to meet in Luanda on Tuesday to ponder what to do about the alleged coup in Zimbabwe. But by then the impeachment procedure against him may already have begun. Either resignation or impeachment will get rid of Mugabe in a constitutionally correct way – so the SADC will have no reason to intervene under the regional body’s rule that any government which comes to power by unconstitutional means should be suspended.

South African officials acknowledged that the region had been outwitted after the ruling Zanu-PF met on Sunday to fire Mugabe as the party’s leader and his wife Grace as president of Zanu-PF’s Women’s League.

The officials cast light for the first time on SADC’s intervention in the crisis. On Wednesday, Zuma, in his capacity as SADC’s current chairperson, sent his defence minister Nosiviwe Mapisa-Nqakula and State Security Minister Bongani Bongo to Harare as SADC’s special envoys to mediate in the crisis.

There has been considerable media speculation that Mnangagwa and the Zimbabwe Defence Force generals who toppled Mugabe early on Wednesday sought, and were given, a secret green light by certain regional governments beforehand to proceed with their “coup”.

Whether or not that was true of other SADC governments is not clear. But Pretoria was not in the loop, officials insisted.

Instead they said Mapisa-Nqakula and Bongo were sent to Harare to remind ZDF chief of staff General Constantino Chiwenga, who led the military action, that SADC would not tolerate an unconstitutional change of government – i.e. a coup.

“We were very clear about that,” one official said. “They told the generals that if this happened the SADC and AU (African Union) policy would be implemented. Zimbabwe would have to be suspended from SADC and probably from the AU also.”

The official said that when the two South African ministers met Mugabe at State House, he told them in fact he had not been asked to resign.

“When they then met the generals separately, they confirmed that he was still the President and that they had no intention of removing him. They only intended to remove criminal interests to protect the legacy of Mugabe himself and of Zanu-PF.

“That made any intervention by SADC difficult,” the official said. “If Mugabe had not been removed unconstitutionally, why would SADC intervene?

“But it’s now clear that the military was launching a parallel process which led to the decision of today,” he said, referring to the decision by Zanu-PF’s central committee on Sunday to fire Mugabe as its president.

The official thought that by the time the troika of the SADC organ on politics, defence and security met in Luanda on Tuesday to consider what to do about the crisis, Mugabe would probably already be out of office or nearly so. The summit will be chaired by Angolan President João Lourenço, who chairs the organ. Zuma’s office has announced he will also attend.

Derek Matyszak, a Zimbabwe specialist at the Institute of Security Studies (ISS) in Pretoria, said if Mugabe did not resign beforehand, a two-thirds majority of both houses of Parliament, sitting together, would be required to remove him from office in what would in effect be impeachment.

It was likely that that majority would be attained, though one could not completely rule out the possibility that enough Mugabe supporters would “come out of hiding” to vote it down.

The South African official said ruefully that the way the Zimbabwe generals had outwitted the SADC should make the organisation rethink its policy on opposing coups.

Scores of Zimbabweans have condemned the SADC for trying to intervene in the unfolding events in Zimbabwe to keep Mugabe in power. Many have criticised the regional body for failing to prevent Mugabe staying in power by hook or by crook so far and have asked how it could justify trying to intervene now at just the moment that Zimbabweans themselves were resolving the problem themselves.

The official said that South Africa was not displeased that Mugabe seemed to be on the way out – especially as he seemed to have become senile and to have fallen under the influence of his wife – “a mere secretary”.

But they said the SADC was not happy with the manner of his removal as this would set a bad precedent in the region. “Imagine if the army in Mozambique or Angola decided to intervene on the side of one or other faction in the ruling party,” he said.

The official also dismissed media reports that Chiwenga had gone to China to receive Beijing’s tacit approval for the coup. He said Chiwenga’s trip to China had been planned long before the coup was considered.

Coltart has warned that the immense euphoria which the Zimbabwean people expressed in their mass demonstrations in Harare and elsewhere on Saturday, demanding Mugabe’s departure, is misplaced.

“It was the same generals who allowed Mugabe to come to power in 2008 and 2013. We must never forget how the military and war veterans spearheaded the violence which followed the March 2008 elections to ensure that Mugabe got back into power.”

He said all that the military was now doing was to “clean up their own mess”.?Matyszak said there was a big debate by Zimbabweans on social media about this. But the general view seemed to be that for all the justified misgivings about Mnangagwa and the military, they had at least got rid of the main obstacle, Robert Mugabe – “and after that we can address ourselves to the next step”.

Zanu-PF has made it clear that it does not want to form a transitional government of national unity to govern until next year’s elections, as many in the opposition and civil society are demanding.

But Matyszak thought Mnangagwa might bring in some technocrats such as Tendai Biti, who was finance minister under the unity government of 2009-2013, to mollify international financial institutions and donor countries so that they would give Zimbabwe the huge injection of capital it now needed to salvage the economy. DM

Photo: Zimbabweans watch as President Robert Mugabe addresses the nation live on national TV in Harare, Zimbabwe, 19 November 2017, a day after tens of thousands of people took to the streets of the capital to call for President Mugabe to step down. EPA-EFE/KIM LUDBROOK