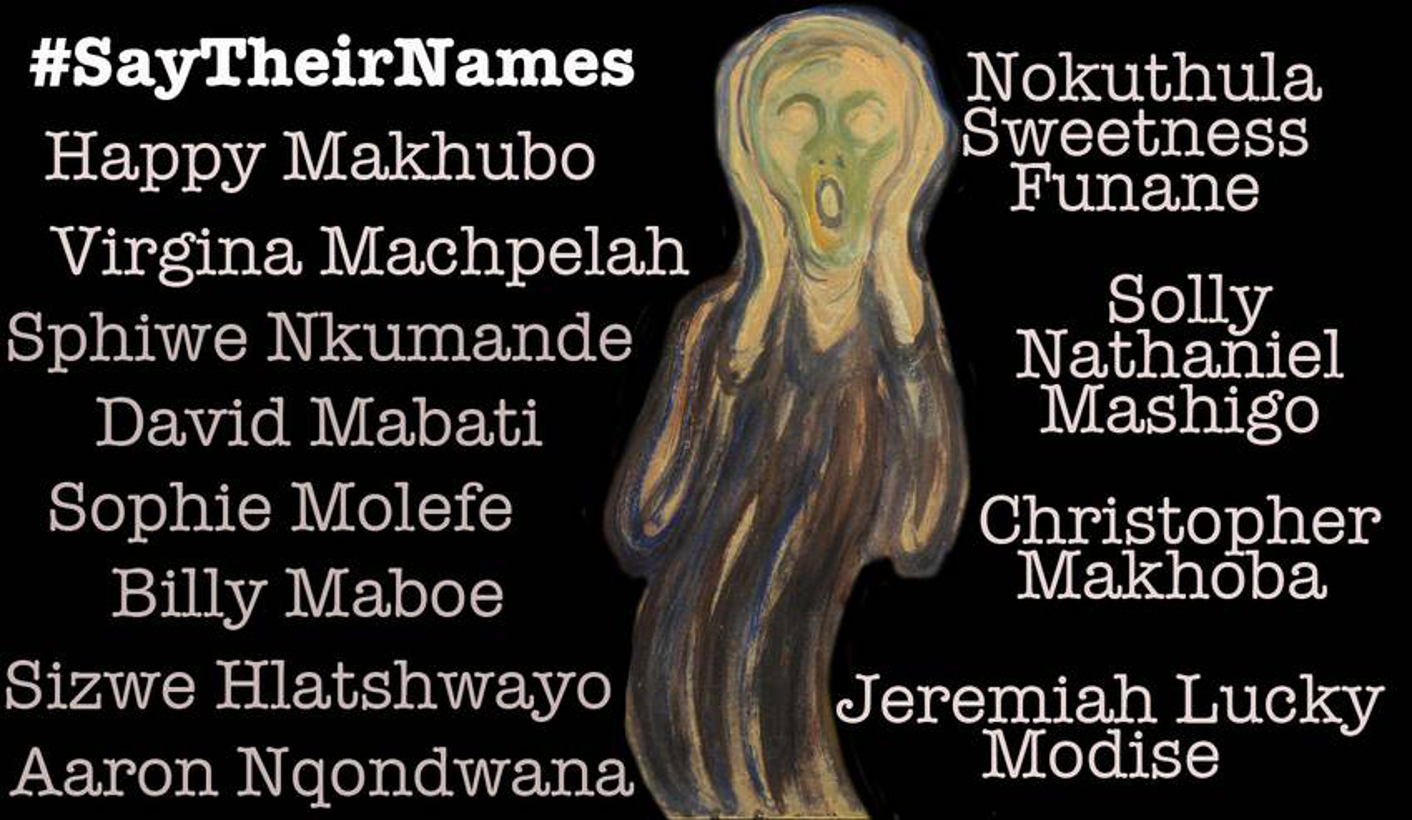 Former Gauteng mental health director Makgabo Manamela tried to downplay her role and responsibility in the Life Esidimeni disaster on Monday, despite evidence against her, leading to farcical exchanges symbolic of the Gauteng department of health’s callous incompetence. By GREG NICOLSON.

“My name is Makgabo Johanna Manamela,” stated the suspended Gauteng director of mental health services, taking the stand after delaying the Life Esidimeni arbitration in Johannesburg for three hours. She wore a cream jacket, her lipstick matching the lanyard of her accreditation. On her way to the stand, she carried a large binder under her arm. She swore to tell the truth – “help God”.

Dr Manamela was subpoenaed to appear before the arbitration at 09:30 on Monday. When proceedings began in the morning, her young advocate, who apologised for being late, told the arbitrator, former Deputy Chief Justice Dikgang Moseneke, that she wanted to tell her side of the story, to clear up some of the allegations against her. But she needed a month’s postponement to read the relevant documents and prepare to answer questions.

In his report, Health Ombudsman Professor Malegapuru Makgabo said Manamela’s fingerprints were “peppered” throughout the project that last year moved around 1,700 patients out of Life Esidimeni. She was one of the three leaders responsible, along with former MEC Qedani Mahlangu and suspended head of the Gauteng department of health Selebano.

She led and signed off on the plan to move the psychiatric patients and gave licences to NGOs unfit to care for them. “Dr Manamela was responsible for several faulty decisions that at times changed the final course of events in the project and are at the centre of this disastrous episode,” said the health ombudsman.

Lawyers berated Manamela’s counsel and the audience laughed as he tried to argue for a postponement. Manamela was the first of the three decision-makers appearing to testify and seats in the tent at the Emoyeni Conference Centre were full. Her lawyer claimed needed information to prepare, in the interest of a fair hearing and to provide satisfactory answers. He said Manamela is facing a disciplinary hearing next month and could be criminally charged for allegedly concealing evidence, although no charges have been laid.

“Can we go to the point, counsel?” asked Moseneke as her counsel failed to answer direct questions. The audience, mostly family members of the 143 people who died as a result of the plan Manamela approved, murmured in agreement. Other lawyers called the postponement application a fishing expedition, insulting to the families.

“Wherever have you heard a witness say, ‘Give me all the documents you have?’” asked Moseneke.

“Sies,” someone said in the crowd.

Manamela’s lawyers had only requested the documents on Saturday, despite the subpoena being served on 2 November. She declined an invitation by evidence leaders to prepare for the arbitration on Sunday.

“I’ve exercised immense patience this morning,” said Moseneke. “In my view, the application is baseless both on the facts that it purports to lie on as well as the law.” Manamela was ordered to take the stand.

The Esidimeni arbitration has moved from a conference room inside Emoyeni to a tent on the lawn, touched up with basic chandeliers and a small tree. The air conditioners struggled against the heat and the tent filled with anticipation as Manamela walked towards the stand.

Moseneke allowed her request to provide her own chronology of the tragedy. “I’m saddened by all the deaths that took place in our services,” she said. “I know it was a difficult time for the families but the summary that I will give to these proceedings will try to clarify what happened.”

Despite her counsel’s claim that she was unprepared, she began to read from a tablet, jumping and speeding through the decisions that killed 143 people. The department suffered financial constraints, the MEC had already decided on the plan, a task team, a project team, was established, there was a draft plan, stakeholders, families, even the troublesome stakeholders, were included, there was a draft plan, the directive came from above.

“Not so fast… Tell a story like a bedtime story,” said Moseneke, his hand on his head. Everyone was confused. Moseneke said she was “freewheeling, so to speak” and needed to provide details and dates, the way lawyers work.

Manamela – some said she was nervous – couldn’t slow down. Her chronology, an attempt to control and lead her appearance, came to an abrupt end and evidence leader Nonhlanhla Yina was told to take her through the issues.

The issues. There’s evidence that after patients, who couldn’t care for themselves and were under the state’s care, were moved, they were found hungry and cold. A starving woman ate plastic bags. The NGOs neither had the skills nor resources to care for them. Relatives didn’t know where their loved ones were and had to search for them. A sister found her brother’s maggot-infested body in a morgue. One witness called it torture. NGO workers continued to draw grants from Sassa cards after their patients had died.

As Manamela was led by Yina through questions, she failed to explain her role and contradicted herself. The health ombudsman found that none of the 27 NGOs where patients were sent had proper licences. Manamela said all of them were assessed. But the deadly Precious Angels’ licence was approved by Manamela for a different address is stated on the licence.

Manamela claimed the new address was approved because the Precious Angels already operating at a different address, with inadequate standards, and had promised to move to the new address. She couldn’t explain why the licence was approved when Precious Angels’ Ethel Ncube said she’d never occupied the listed address and hadn’t had any psychiatric patients before February 2016. Before then, Ncube operated a daycare centre. Manamela had only signed the letter of agreement with Precious Angels to take Esidimeni patients in September 2016, after 15 people had already died at the facility.

The started to jeer. Moseneke asked why her department moved patients to NGOs without paying them. “Why did you expose these patients to these terrible circumstances before you made proper arrangements?”

Manamela acted like she had no choice, was just following orders. She couldn’t produce a which patients were to be moved to which NGOs from Life Esidimeni.

Moseneke slowed down. “You know it’s going to help if we get fairly candid and serious. You know how many people died here because of the decisions you made… You can’t stand up and tell me everything was perfect,” he said. “Do you think they died you, the commander-in-chief [of the project], acted in every way properly?”

Manamela admitted not everything went to plan, but she blamed the deaths on what happened after she led the transfer of patients to NGOs. Some patients were transported on bakkies, some tied down.

Her appearance exposed the heart of the Gauteng health department. Reforms are, as always, said to be , but she was defensive, contradictory and callous, even after 143 patients died due to her – still missing – plan. DM