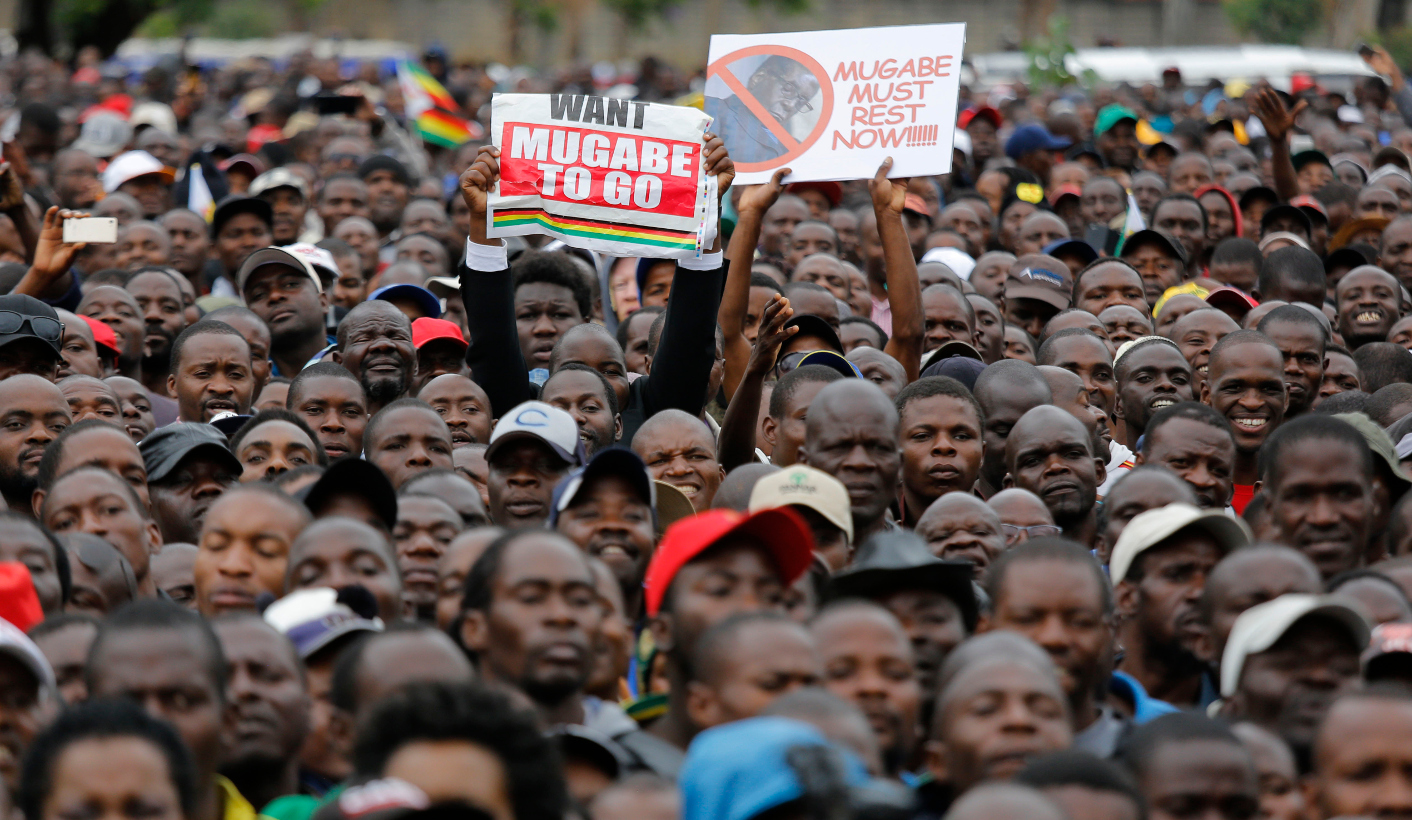 People took to the streets in several major cities and towns in Zimbabwe on Saturday to demand the country’s President Robert Mugabe leave office immediately. Marchers also praised the military, which intervened and nipped Mugabe's administrative powers on Monday. By MAYNARD MANYOWA and AFP.

The largest demonstration took place in the country’s capital Harare where thousands of demonstrators began gathering at 9am at Robert Mugabe Square, a few metres from the headquarters of Mugabe’s ruling Zanu-PF.

The mass turnout came after an unprecedented week which saw the army’s top brass seizing power and putting Mugabe under house arrest in response to his sacking of Vice President Emmerson Mnangagwa.

It was a stunning turnaround for the 93-year old Mugabe, who has ruled  Zimbabwe  with an iron fist since 1980.

Veterans of the liberation war, who previously supported Mugabe, had initiated the gathering, which saw marchers rallying in Highfield, a working-class suburb about 10km from the city centre of Harare. Highfield was where Mugabe gave his first speech after returning from exile in Mozambique ahead of independence in 1980.

“This is the best day of my life. We are hoping for a new life after Mugabe,” said 38-year-old Sam Sechete, who was marching at Highfield with a crutch.

Mugabe was denounced at the gathering, with calls for his ousting growing louder through the day.

Minister of Cyber Security, Threat Detection and Mitigation Patrick Chinamasa addressed the crowd gathered at the stadium, and demanded that Grace Mugabe be investigated for her crimes, while her husband Robert should step down immediately.

Symbolically, the demonstration was held just 500 meters from the home Mugabe grew up in.

There was an atmosphere of celebration among the crowds with protesters cheering the soldiers and stopping to shake their hands.

Photo: People take to the streets as part of mass action protests against President Robert Mugabe, in Harare, Zimbabwe, 18 November 2017. The Zimbabwe National Army (ZNA) has taken control of the running of the country with Mugabe being under house arrest for days, but making his first public appearance at a University graduation ceremony on 17 November 2017. Photo:EPA-EFE/KIM LUDBROOK

Traffic around the stadium built up for kilometres, forcing people to take the hour-long walk to the grounds.

In the city centre, people sang and danced outside Zanu-PFs headquarters.

Army personnel on the ground had a tough job containing the protesters, while trying to direct traffic and avoid congestion.

The protests were peaceful. Several people sang songs of praise to the soldiers, while asking to take pictures with them.

Photo: A women poses for a selfie with soldiers at an anti-President Mugabe rally held by the War Veterans as part of mass action protests in Harare. Photo: EPA-EFE/KIM LUDBROOK

“These men are our heroes. These are our soldiers. We are liberated!”, one protestor shouted while offering the soldiers a hug.

One soldier Daily Maverick spoke to expressed shock at the level of support they are receiving from the people.

“People are coming offering us food, water, drinks and even money. But, they want pictures. I don’t know how many pictures I’ve taken,” he said.

The soldier added he had never seen this much love for the military.

Protestors held placards requesting that fired Vice President Emmerson Mnangagwa be reinstated, while others praised the commander of the defence forces, General Constantino Chiwenga, and other generals.

Other placards praised the army, thanking it for helping bring an end to what they call tyranny.

Such an open display of disloyalty would have been unthinkable just a week ago as dissent was routinely crushed by security forces.

A few placards carried messages aimed at SADC and AU, demanding that they make Grace answer for assaulting a South African model and for trying to meddle in Zimbabwe’s politics.

Photo: People gather at an anti-Mugabe rally that brought the city to a standstill.  Photo: EPA-EFE/KIM LUDBROOK

Soldiers  denied protestors access to march to state house after cordoning off the roads close to the area. The same roads lead to Mugabe’s private residence.

Demonstrators staged a sit-down protest in the road after being halted by the troops.

“This is not fair. Why are the soldiers preventing us to march to State House?” Rutendo Maisiri, an unemployed 26-year-old woman said. “It is wrong. We will stay put.”

By late afternoon those gathered at the stadium were intent on marching to Mugabe’s private residence. DM

Photo: People gather at an anti -Mugabe rally held by the War Veterans as part mass action protests that have brought the city to a standstill, in Harare, Zimbabwe, 18 November 2017.  Photo: EPA-EFE/KIM LUDBROOK