AfriForum’s private prosecution plan under way with Jiba in sights 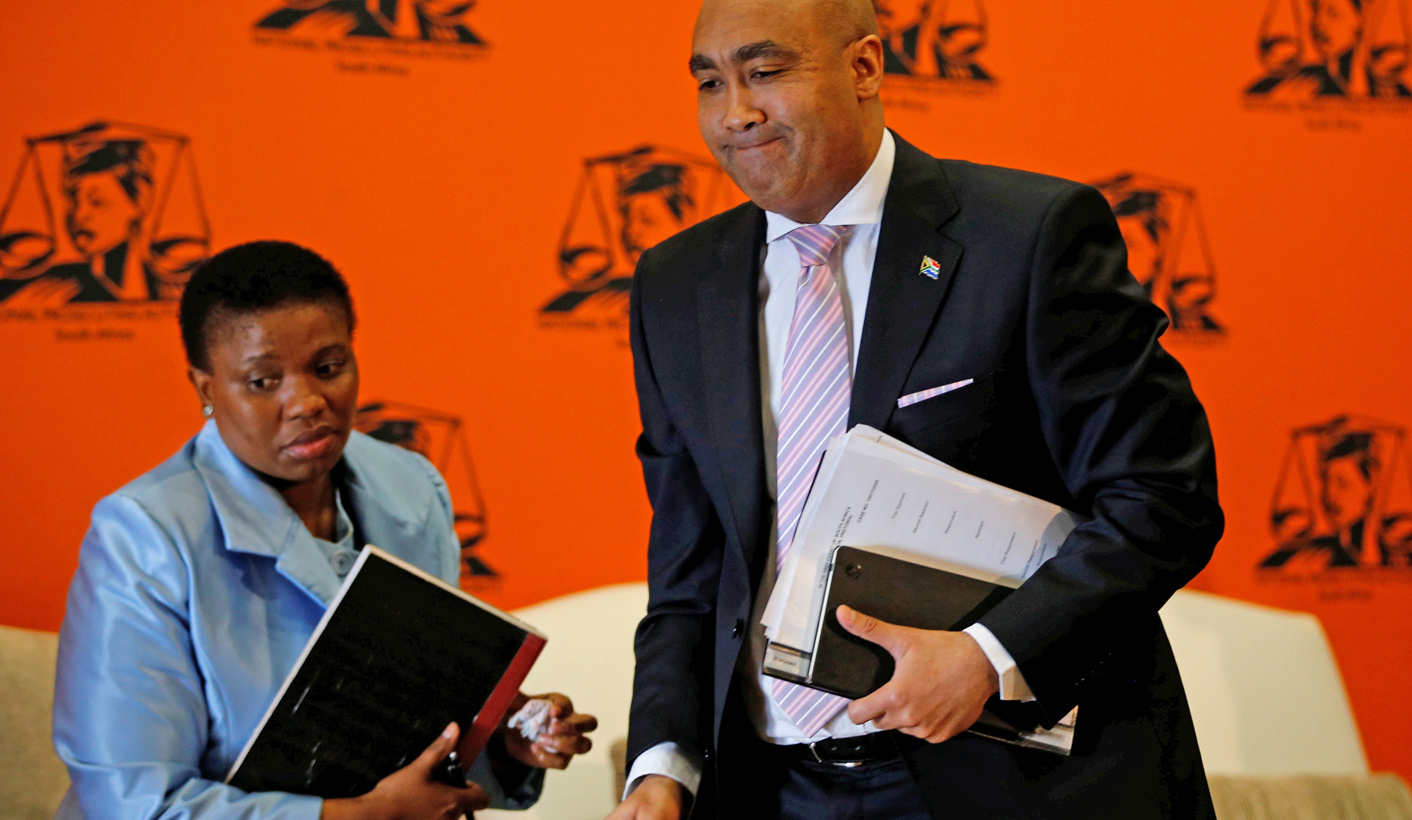 When AfriForum announced that it was setting up a private prosecutions unit to take on cases that the state declined to prosecute, there was much scepticism. There still is – but there’s no doubt that the group is really going for it. On Thursday, AfriForum revealed that the latest target in its sights is former acting NPA head Nomgcobo Jiba, less than a month after stating that President Zuma’s son Duduzane is being pursued. Whether these attempts are successful or not, the fact that it’s come to this is a depressing benchmark of the state of our criminal justice system. By REBECCA DAVIS.

To say that there is bad blood between Gerrie Nel and Nomgcobo Jiba would be understating things. It was deputy director of public prosecutions Jiba who succeeded in ensuring that state prosecutor Nel was arrested by armed policemen in front of his wife and children in 2008, and charged with fraud, perjury, and defeating the ends of justice. Those charges were later dropped.

Now, the tables have turned. It is Nel who has given notice of his intention to prosecute Jiba. The charges? Fraud, perjury, and defeating the ends of justice.

The story of how we got here is a long and murky one, steeped in the dirty tricks and political interference that South Africa has now come to expect from the National Prosecuting Authority. Nel and Jiba’s beef dates back to 2005, when Nel prosecuted Jiba’s husband Booker Nhantsi, a member of the Scorpions, for stealing almost R200,000 from a trust. Nel got his conviction – but Nhantsi was later officially pardoned by President Jacob Zuma.

Jiba went after Nel in 2008 after the state prosecutor began to pursue the late former police chief Jackie Selebi for corruption. A report released after the fact found that Jiba “actively sought” to have Nel arrested.

At a press conference on Thursday morning, AfriForum CEO Callie Kriel was at pains to clarify that the decision to go after Jiba had nothing to do with Nel’s personal history with her.

“It was not Advocate Nel’s decision to prosecute Jiba; that was something AfriForum wanted to do in August 2015,” Kriel said.

In order to launch a private prosecution, it has to be shown that the matter in question has a direct effect on the life of a private individual. In this case, the individual is General Johan Booysen, the former head of the Hawks in KwaZulu-Natal. Booysen was charged with racketeering by then acting NPA head Jiba after he tried to investigate the business operations of a close Zuma associate.

The charges against Booysen were set aside as baseless by the KwaZulu-Natal High Court in 2014. Jiba’s successor in the NPA hot seat, Mxolisi Nxasana, subsequently saw to it that Jiba was charged with perjury and fraud for her actions with regards to Booysen – but as soon as Shaun Abrahams took over as NPA head, that all went away.

Abrahams decided not to prosecute Jiba, in so doing allegedly flouting the legal advice of two prosecutors who believed that a strong case existed against her. The case was duly withdrawn.

On Thursday, Kriel said: “We have this morning filed a letter signed by General Booysen asking the NPA for a nolle prosequi certificate so that we can, on behalf of General Booysen, go ahead and prosecute Advocate Jiba.”

Booysen expressed thanks to AfriForum for assisting him with the litigation, adding that he believed that the NPA has “abrogated their constitutional duty” by not pressing a case against Jiba.

“Once [the nolle prosequi] certificate has been issued, then the complainant may proceed with the prosecution, but the matter does not end there. The private prosecutor must then brief private counsel and attorneys to assist in the prosecution, must pay a hefty deposit upfront for the estimated court time and costs of the court staff, including the presiding officer. The complainant is also expected to conduct their own investigation and obtain their own evidence. They are not entitled to access to the police docket,” Breytenbach said.

“So as you can see, it is not an easy solution.”

AfriForum’s Kriel told the media on Thursday that the costs of the litigation were not a problem for the advocacy group, which is funded through donations and membership fees.

He said that Nel had worked “for months” compiling the docket on Jiba, which was “meticulous”. Now the NPA will be given “two to three months” by AfriForum to consider their decision.

“They can reconsider and decide to go ahead with the prosecution of Jiba themselves, or they can give us the [nolle prosequi] certificate,” Kriel said. “In both cases we would see that as a win.”

He acknowledged that it was highly likely that NPA head Abrahams might try to delay or in other ways “manipulate” the process. “We are ready to go to court to force him to do his job,” Kriel declared.

When AfriForum announced the launch of its private prosecution unit in January 2017, Nel specified that their targets for prosecution would “not only be high flyers”. Thus far, however, the two individuals they’ve chosen to pursue – Jacob Zuma’s son Duduzane and Nomgcobo Jiba – are accustomed to flying pretty high indeed.

Are private prosecutions a waste of time and money? Daily Maverick asked the experts…

“In my opinion a private prosecution is important for at least the following reasons: one, it is one of the ways through which victims of crime participate in the criminal justice system; and two, it is a good way to hold public prosecutors accountable – they have to think twice before they make a decision not to prosecute. The existence of the possibility of instituting a private prosecution could minimise the politicisation of prosecutorial decisions.”

“I do not think that private prosecution is ever a waste of time because it gives the aggrieved party at least another avenue in their pursuit for justice, whether it is successful or not. I do not think private prosecutions will necessarily force the NPA’s hand, but this will definitely shed light on any ‘inaction’ and draw the public’s attention to the prosecutorial discretion of the NPA.”

Lawson Naidoo, Council for the Advancement of the South African Constitution:

“I think the fact that we are even considering private prosecutions, especially of matters that are of such clear public concern, exposes the fact that the criminal justice system is broken; that it has been captured by the interests of a clique to ensure that those who enjoy political protection can act with impunity.

“Private prosecutions remain an important part of the criminal justice architecture to enable aggrieved victims to seek justice, but they should not become a substitute for state responsibility, or to excuse the NPA from adhering to its mandate. It is a tool that only those with resources can utilise and therefore inhibits the pursuit of justice for all.”

“There is room for private prosecutions, properly funded and conducted currently in our legal space, and they have become necessary. This is a sad indictment on the ability of the NPA to do its job, and on the public perception of how the NPA conducts itself. It is also in reality only available to those able to fund such operations, certainly not ordinary citizens.

“If Gerrie and AfriForum select their cases with care, are successful in obtaining nolle prosequi certificates for these prosecutions, then there is certainly space and scope for such prosecutions. We should be careful not to see it as a replacement for the NPA, since this can and should never be the case. The first prize is always going to be to re-engineer the NPA into a properly functioning service for all South Africans. The prosecution of Jiba, now under discussion, has been delayed and then withdrawn by the NPA for no good reason in law. A successful private prosecution will demonstrate the fact that the NPA has no inclination nor ability to undertake prosecutions when the suspect(s) are protected politically.”

“Private prosecutions are, in theory, an important mechanism to force the NPA’s hand where they have declined to intervene, thereby exposing their inaction. Of course, there will always be cases where the NPA refuses to prosecute – the NPA has limited resources and need to devote their resources in line with their policies and on cases with a prospect of succeeding. Not all inaction by the NPA will be illegitimate but where this is the case the option of a private prosecution is a way to hold perpetrators and the state to account.

Photo: National Director of Public Prosecutions Shaun Abrahams (R) walks past his deputy Adv Nomgcobo Jiba as he leaves at the end of a media briefing in Pretoria, South Africa, May 23, 2016. REUTERS/Siphiwe Sibeko