Hell or High Water: Face to face with Patricia de Lille and the battle to stave off Day Zero 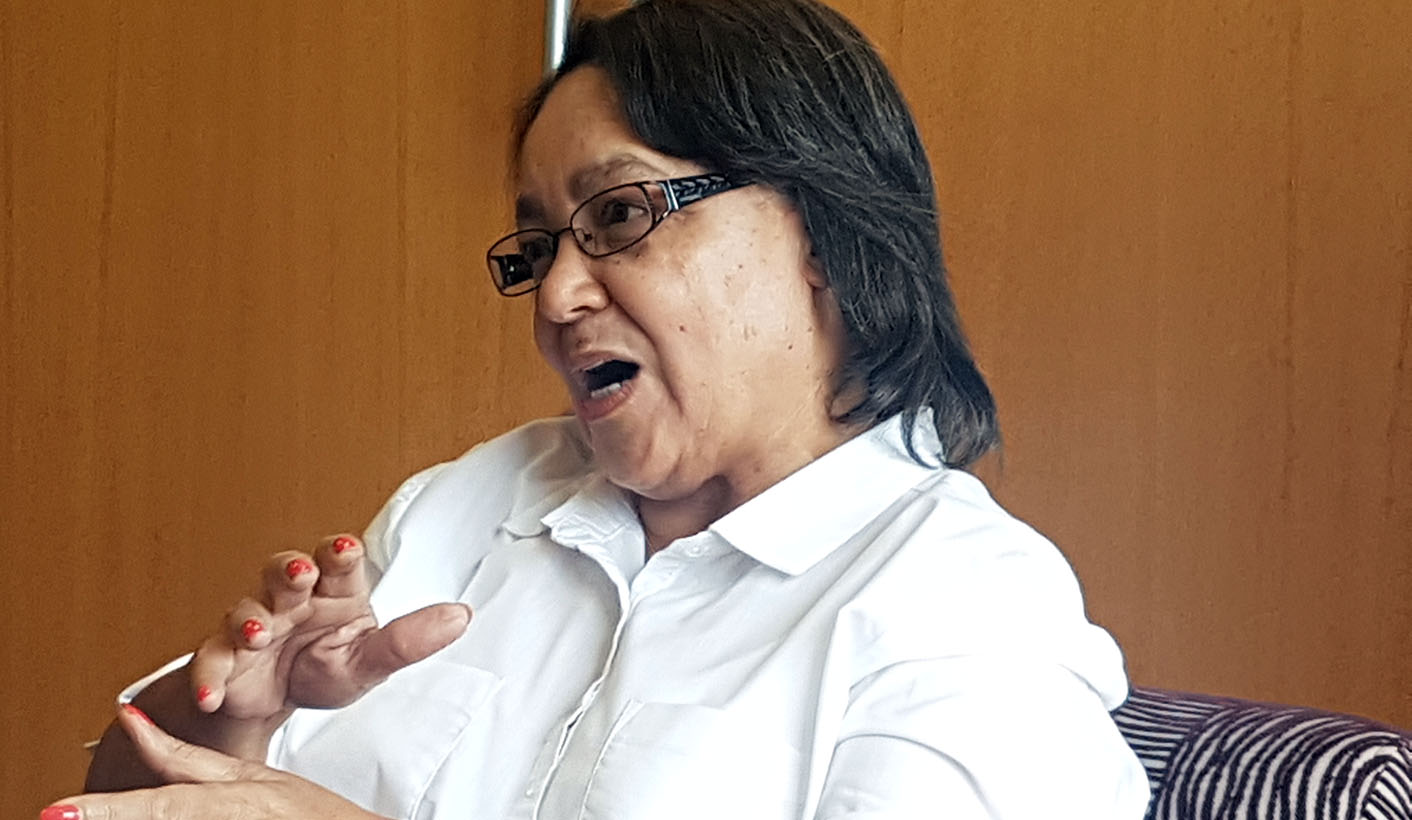 A cautiously optimistic Patricia de Lille told Daily Maverick this week that the City of Cape Town’s disaster management plan had managed to stave off the projected March 2018 date of Day Zero for the city’s water supply. The new date is now May 13, the city announced on Thursday. But structural and bureaucratic challenges still stand in the way of bringing augmentation initiatives online, and officials are working overtime to make up for lost time to avoid running out of water. By MARELISE VAN DER MERWE.

Phase One of the City of Cape Town’s disaster management plan is yielding results, with the predicted “Day Zero” shifted to beyond March 2018 thanks to aggressive demand management and initial augmentation efforts.

The City was unable to confirm exact figures earlier in the week, but at a subsequent press conference on Thursday, the city announced that the new Day Zero was now forecast to be 13 May.

In an interview with Daily Maverick on Monday, however, Cape Town’s Executive Mayor Patricia de Lille said she was pleased with the results of additional water supply from the Atlantis aquifer and the Molteno reservoir in Oranjezicht. Other augmentation plants will come online and increase incrementally from February 2018, she said.

The City is also transferring water from the Palmiet River to the Steenbras Dam when there is excess flow, which typically happens after rain. There are plans to transfer an additional 10-million cubic metres once the necessary approvals have been obtained.

What does the deferred Day Zero mean?

The crisis is far from over, however. In a statement issued on Monday, De Lille confirmed that dam storage was at 36.8%, with useable water at 28.6%. Collective water usage was at 582-million litres, she said, “therefore 82-million litres above the required level of 500-million litres per day”. She emphasised that too many residents were still not making the necessary efforts to save water, although demand management devices had made a noticeable difference.

Cape Water crisis: What does drought management look like in the Mayor’s offices?

According to De Lille, 2017 has seen a far more aggressive approach to managing the drought. Speaking to Daily Maverick, she and Nicholson said the Mayor was meeting the Water Resilience task team, other City officials and experts to deal with the water crisis daily from approximately 07:00 until after 14:00 to focus on the water crisis. “Officials are working long hours around the clock to take the necessary action to bring additional supply on line as quickly as possible,” said Nicholson.

Since the Water Resilience Task Team had been established in May – rather than working through multiple committees – managing the drought had been more effective, said De Lille. Although many of the decisions relating to drought management were national competencies, cities were “at the coalface” of mitigating the effects of climate change, she said.

De Lille said collaboration with the national minister had been fruitful recently and that although it had taken time to arrange an initial meeting, there was now more frequent contact.

Will we hit Day Zero?

An upbeat De Lille reiterated that she would “not allow a well-run city to run out of water”.

What went wrong and how do we fix it?

This has been a point of discussion throughout the drought: the role of blame. Is tracing the source of the problem the same as playing the blame game? Is noting the limited capacity of any one source to act passing the buck, or flagging a potential issue?

Following the interview with De Lille, it was not clear where she stood on this question. She was very clear on what was a national competency versus what was a provincial or local competency; she was also clear on the need for the City to take charge.

She did, however, acknowledge her limitations; legislatively, bureaucratically and economically.

“I think the stumbling blocks will always be there,” she said. “You deal with different departments and personalities. I say to myself every day, ‘You are on your own.’ I’ve received a 66.6% majority. That’s people saying, ‘We trust you.’ I don’t want to let them down. We will not run out. [But] your hands are tied – yes. Legislatively and otherwise.”

Was the City too tardy?

“With climate change you can’t say it’s too late or it’s too soon,” said De Lille, adding that she was hopeful that the next rainy season was due at the end of May. Despite earlier reports that augmentation strategies were coming online slower than initially hoped for, De Lille appeared optimistic that Day Zero could be staved off for long enough to avert disaster.

Is she following the Premier’s example and showering every third day? In a word, no. “The first thing I did: I had a big 10-metre pool and I filled it up and paved over it. I shower less than two minutes. I use the KFM jingle [to keep time].

“You need a team effort, and it depends on the leadership in that team effort. You need to illustrate that I’m no better than you, I will make the necessary sacrifices. A leadership display is important.”

What can we expect over the summer?

In De Lille’s official statement, she said the summer’s heat and wind can be expected to deliver a further steady decline in water supply, so continued water savings are “a must”.

“We need to do more to bring our usage down, while at the same time pulling out all the stops to ensure that we implement various projects for additional water supply to help see us through to winter 2018. Additional supply goes hand in hand with further savings.”

What’s the deal with augmentation?

“We have looked at ways to fund a first phase of water supply projects by re-looking at our spend across the City to see which non-water-related projects we can temporarily postpone while protecting funds for basic and emergency services,” De Lille told Daily Maverick. “Internally, we have made some tough decisions and we will continue to do what is in the best interests of the people of Cape Town, no matter how difficult the challenge. We will partly be funding our first seven additional water projects with this saving and reprioritised money which comprises some R2-billion.

De Lille said the seven emergency water projects of the first phase earmarked for these funds are the desalination plants at Monwabisi, Strandfontein, the V&A Waterfront, and Cape Town Harbour; the Atlantis and Cape Flats aquifer projects, and the Zandvliet water recycling project.

A continued challenge is the Olympic-level bureaucratic gymnastics required around tender processes, water licensing and other aspects of the water augmentation process, which De Lille acknowledges remain difficult.

What’s happening to other services while water takes precedence?

“We have tried our best to say do whatever we can without impacting important, life-saving services,” said De Lille. “I can’t take too much out of my existing budget for the water.” After the 2016 elections, however, the City of Cape Town undertook to become more responsive to the needs of the city, she added, with systems in place to detect and prevent problems.

Is the criticism of Xanthea Limberg, Mayco member for informal settlements, water and waste services, warranted?

De Lille doesn’t think so. She argues that none of the City politicians working on the water crisis have water-related qualifications. “Xanthea doesn’t deal with the technical aspects; she is briefed on them, as I am,” she said. “We have Peter Flower, Barry Wood, Gisela Kaiser and many other officials – those are the kinds of qualified people dealing with the technicalities. Xanthea deals with the efforts to drive down the demand.

“The smallest person,” she says, “has the biggest problem.” DM

This article was updated at 1.40pm, and a date subsequently amended at 5.50pm, on Thursday 16 November.

Photo: Cape Town Mayor Patricia De Lille at her offices on Monday. ‘I will not allow a well-run city to run out of water,’ she said. Photo: Janet Heard