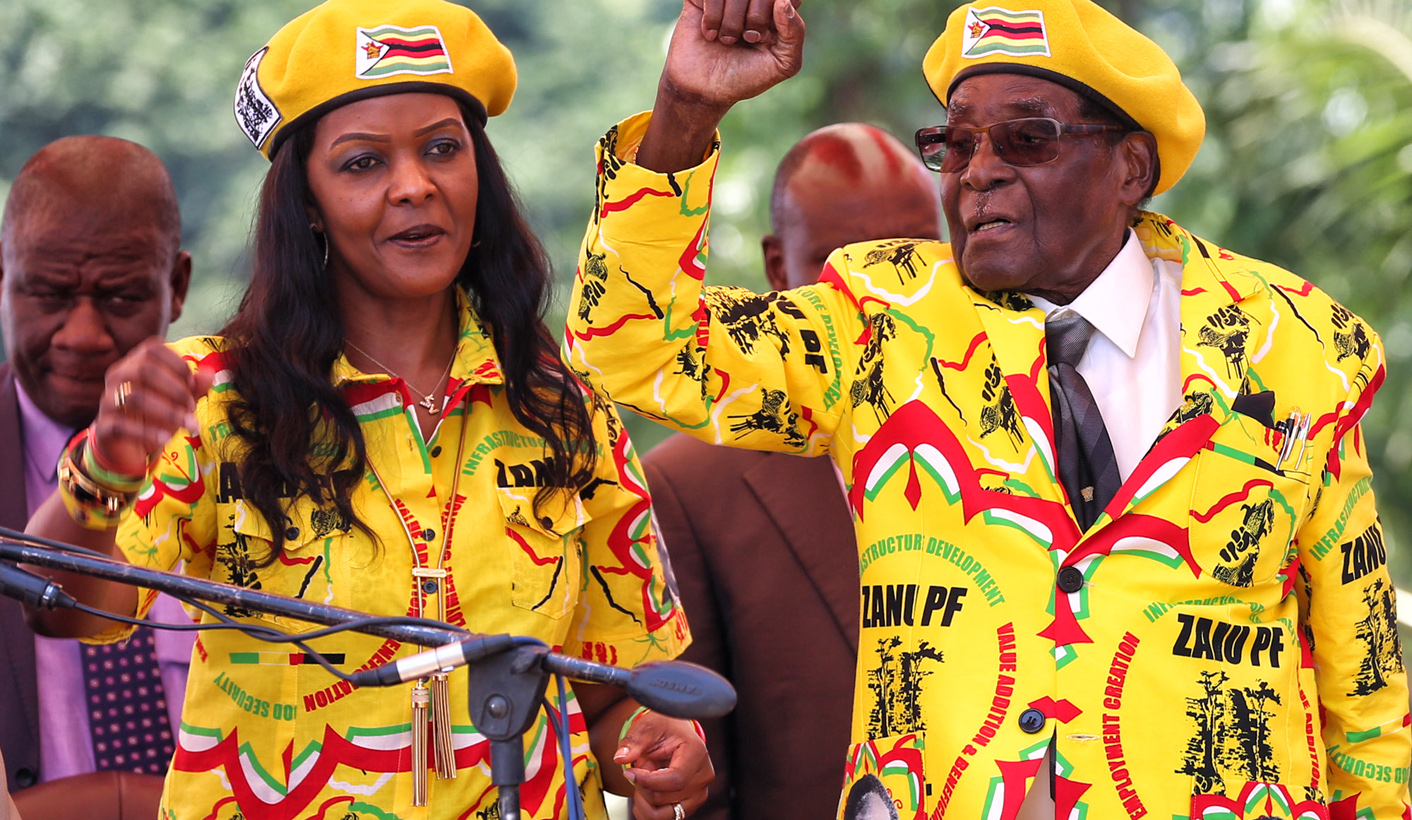 The perfect storm is coming to South Africa and the country’s leaders do not appear to be very good weather people. J. BROOKS SPECTOR raises the alarm. Again.

Most non-meteorologists became familiar with the term “the perfect storm” when they came across it either in the book by Sebastian Junger, or in the film directed by Wolfgang Petersen. In both versions, the storyline depicted the tragic fate of a Gloucester, Massachusetts-based fishing trawler, the Andrea Gail, and its crew, when the boat was caught – and sank – in the confluence of three late autumn storms in the North Atlantic. The resulting storm became an immensely powerful weather system, much more than just the sum of its individual elements. And very, very lethal.

Just possibly, something like an international relations version of a perfect storm is poised to buffet South Africa, and that will not be pretty. Almost a half-year ago, I was given the chance to watch the African National Congress’ consultative process at work in its drafting of its foreign policy positions for its national policy congress. It was not quite the sausage-making that German Chancellor Otto von Bismarck had warned against, but, still, it was not particularly pretty, and the result had more than a little of the “horse designed by a committee” feel to it.

After watching this exercise, I had written in this space, “In some areas, such as economic development, government control over major economic sectors, or social grant policies, the final agreed-to policy documents will certainly be strongly reflective of the leadership’s ambitions, values and goals. But that may not be the case as much as in foreign policy. This will be the case, if for no other reason, than that an articulate, cogent, coherent foreign policy no longer looms very large in South African thinking in the way it once did during Nelson Mandela’s tenure in office – as with ‘highly principled foreign policy’ as a jewel in the crown of South Africa’s return to global respectability. That is because, for many, foreign policy, save at the margins, seemingly has little to do with the turf wars being fought over the swag that constitutes the winnings of today’s ‘hyper-patronage’ state.

“… Foreign policy – the diplomats’ occupational field of activity – is supposed to be a careful analysis of a nation’s most fundamental needs, goals, ambitions and responsibilities in connection with the rest of the international community and then a sorting out of what has to happen to enhance the nation’s safety and security.

“… For a middle-tier nation such as South Africa, foreign policy is significantly about boosting the chances of the nation for economic advancement and regional stability – and, hopefully, in advancing at least some elements of that ‘highly principled foreign policy’, in terms of its efforts in international forums such as the United Nations. All of this must be tempered with some kind of realistic evaluation of what the country’s leaders see as national self-interest. [And]… self- or national interest naturally includes the traditional values of state preservation and economic advancement, as well as support for the broad application of the rule of law, along with a vigorous nod towards support for regional and global stability….

“Not surprisingly, as with this document under discussion, the governing party periodically produces a foreign policy manifesto for its national policy conference (coming up at the end of the month). Thereafter, a significant share of that language will find its way into governmental language on foreign policy planning and execution. The challenge is to see what is key about this document – and what has been left out.”

In response to a still earlier version of the working paper, I had argued, “… as a document for hands-on guidance to the government or the nation’s people, it suffers the flaws of all cut-and-paste jobs… [But] What it clearly lacks, however, is any real sense of the criticality of economics and trade for national growth and success. There is no sense of comparison with rivals and alternative models of success, and no embrace of difficult choices that must be met in the future. When everything has equal weight and everything is a first priority, nothing is…’

“This time around, while the newest document speaks of South Africa’s dealings with the BRICS alignment, the building of solidarity with progressive forces globally and global institutional reform, as well as a range of consultative mechanisms such as enhanced parliamentary relations and exchanges, it devotes three sentences to the entirety of economic diplomacy… [Italics added]

“There is no discussion of the how of growing FDI or other international participation in the economy, let alone why such things should matter to the country’s foreign affairs agency, or how that department should work tightly with all other elements of government, private industry and the investor community as a whole.”

University of Johannesburg academics Chris Landsberg and Mzukisi Qobo, together with the Centre for Global Dialogue’s Francis Kornegay, had argued in their response to the new draft, “Since 2009 the ANC has failed to offer animating ideas about the country’s place in the world. Its perspectives on power dynamics in the world have travelled back in time, and are frozen in a world that no longer exists. This is notwithstanding its acknowledgement that at both the National Conference in Mangaung in 2012 and the National General Council of 2015 [it] observed that the material conditions continue to change in ways that are unpredictable and fluid. This point also features in the current discussion document prepared for the 30 June 2017 ANC Policy Conference.”

Beyond the failure to come to terms with the centrality and criticality of economic issues and economic diplomacy in anything approaching substance, I had then gone on to note, “… on perhaps the most important issue of all beyond economically related diplomatic efforts and foreign policy initiatives, the ANC discussion document is mum. And that, of course, is the future of South Africa’s interactions with its northern neighbour, Zimbabwe.”

And so here we now sit, just as two major storms are starting to buffet the South African ship of state simultaneously, and as no one in authority seems particularly prepared to deal with the major damage that seems likely to ensue as a result. The first of these, of course, is the economy, now in yet worse shape than it had already reached when the party’s newest foreign policy discussion paper had first been mooted.

Watch this clip from the movie that made the term, and phenomenon, world-famous:

The country is now perched precariously on the lip of the crater – at the bottom of which is now-broad agreement that its sovereign bonds and other investment opportunities will get junk status ratings shortly. That will precipitate major mandatory capital outflows by institutional investors, trigger higher inflation and still-further currency exchange rate slides. This is not what we call a virtuous circle. Price rises on consumer goods, fuel, and services will follow, and, with all this, unemployment may well nudge past 30%.

Such circumstances will not be helpful to politicians in power, let alone for pretty much everybody else being caught in it. And still there appears to be no realistic, concrete plan in place to set in place international and domestic economic policy initiatives to resurrect the nation’s economic circumstances – other than some semi-delusional whistling in the dark. By itself, this economic storm already has the makings of one of those category 5 hurricanes.

But then there is Zimbabwe. That is storm number two. From the look of it, South African policy-makers had no plans, no scenarios, nothing ready to go, in order to deal with the absolute inevitability that the Mugabe regime was going to falter sooner or later – and probably sooner. And so it has. In response, on Wednesday, the South African president announced it was sending an observer to consult with both sides, whatever that may have meant, and whatever that may mean, going forward.

Talk about shutting the barn door after the horse has bolted at full gallop to the next county. The president in Zimbabwe was, after all, a nonagenarian, and was visibly frail and confused in recent public appearances.

And now, with the near-certain ending of the Mugabe era, and the almost certain economic, political and security upheavals that will follow this moment, if millions of Zimbabweans have anything in common with people from any other trouble spot in the world today – or throughout history – many Zimbabweans will up-stakes and flee for greater security, even if it is only temporary.

We’ve all watched the terrible scenes in the Mediterranean, in refugee camps in the Balkans, Greece and Turkey, and now, most recently at the Bangladesh/Myanmar border on television. Perhaps three million Zimbabweans are already inside South Africa – or beyond – and that movement of people happened largely as a result of economic insecurity. But what happens when the likely deluge arrives in Zimbabwe? Does South Africa have a realistic emergency plan to be launched into motion to deal with the vast movement of people, the economic upheavals and the rest of the chaos that may come very soon as a result of the end of the Mugabe era?

Someone pointed out to me earlier on Wednesday that besides all those potential circumstances, there is also the fact over a hundred South African companies operate in Zimbabwe – and that much of the economy in the northern part of South Africa is tied to consumer shopping destined for Zimbabwe. What are the plans for emergency economic support to such a deeply affected region, once spending by Zimbabweans dries up? Or, even worse, once actual money essentially vanishes from the country north of the Limpopo? How are many people there are going to be able to eat, let alone buy anything else they need? Are there planned co-operation plans already on the books with international aid agencies, other foreign nations, and NGOs to feed, clothe and shelter an increasingly desperate population beyond those who already survive courtesy of international donor aid?

The consequences of a failure to put economic diplomacy in support of sustained, stable, forward-thinking, rational economic policy are about to hit South Africa with a real body blow. But then, coping with the increasingly likely implosion to the north will just make things worse. And the combination of these two, even if there were no other major policy storms on the horizon such as a major catastrophic climate disaster, will make things much, much worse.

Now, here is a final thought. Just perhaps, the gods who decided where that rugby tournament takes place in 2023 simply didn’t want to place a bet on South Africa sorting out its economic storms during the next five-and-a-half-years. And when they cast their votes, they probably were not even thinking about events in Harare. DM

Wine in a time of lockdown: Because survival is insufficient