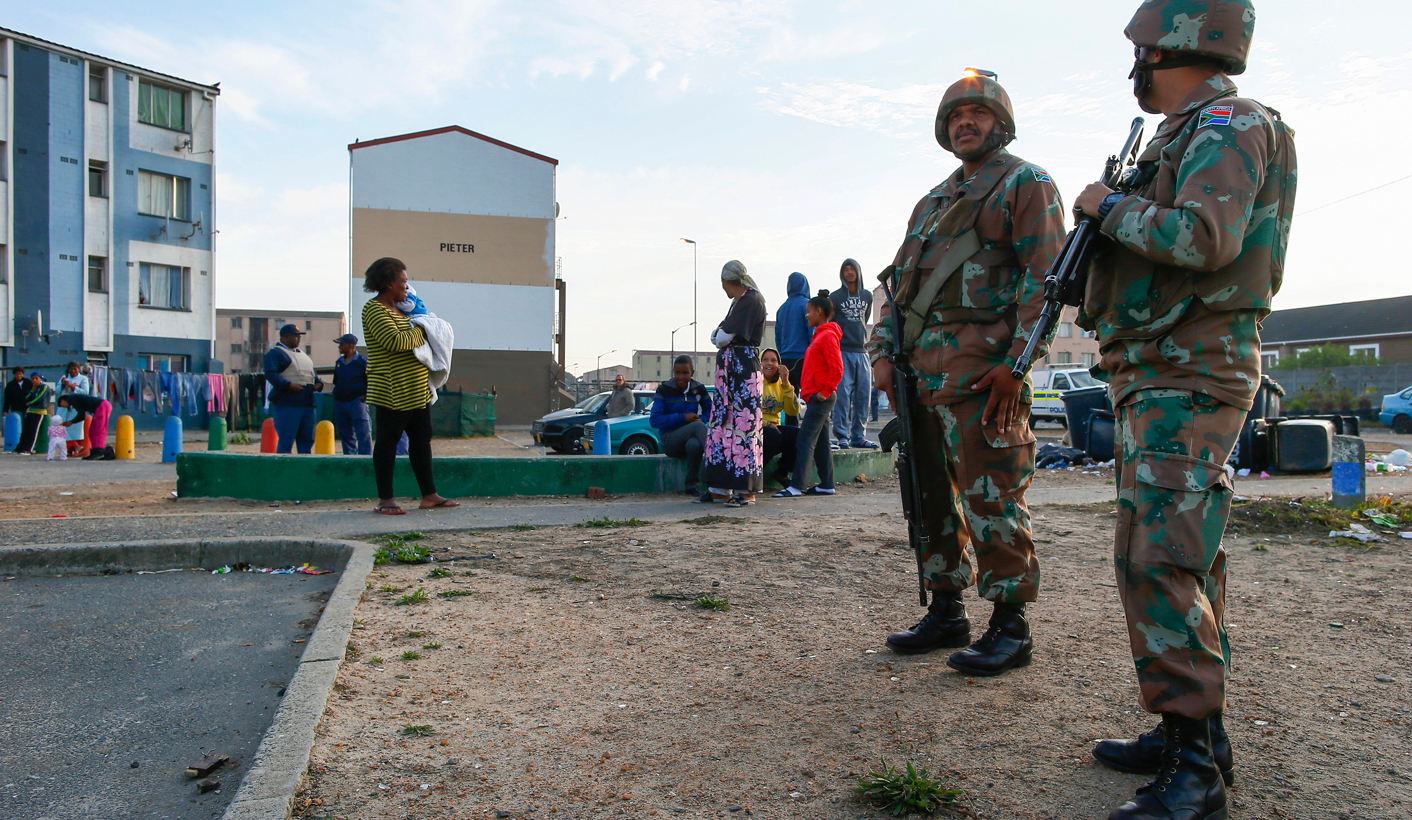 Militarisation in response to high levels of crime has largely failed in South America with countries like Brazil, Columbia and Mexico witnessing increased levels of violence and larger networks of corruption including law enforcement who, in fact, work with gangs. The SANDF cannot become the solution in response to the largely ineffective, politicised, corrupt and mismanaged police apparatus in South Africa. By JODI WILLIAMS.

In recent weeks, Police Minister Fikile Mbalula and Western Cape Premier Helen Zille called for the deployment of the South African National Defence Force (SANDF) to the Cape Flats to combat crime and gang-related violence; A call backed by many. While there has been no formal processes put in place as of yet, the ultimate decision – as outlined by the Constitution – rests with the President.

Communities on the Cape Flats have come out in support of militarisation – a move that could be out of sheer desperation due to decades of neglect by provincial and national government in addressing the deep-rooted, historical and systemic issues on the Cape Flats that lead to violence, crime and gangsterism. The call for militarisation sparked debate with many critiquing the move as dangerous and highlighting some valid concerns with deploying the military to Cape Town’s already volatile townships as a solution to solve crime and gang-related violence.

One such concern is South Africa’s painful history of military presence in townships; a history that my mother’s generation sorely remembers. During the 1960s and 1970s, South Africa was a militarised state with the apartheid regime being heavily reliant on the armed forces to maintain its control, uphold Apartheid and squash any form of resistance. By the 1980s, the armed forces had occupied townships in hopes of generating fear amongst Black people. The residual effects of South Africa’s violent past are still evident and pervasive with many Black South Africans being able to vividly recall the trauma and violent nature of community life during apartheid; largely due to the presence of the military in communities.

Another concern is the questionable reform that SANDF has undergone since the transition from Apartheid to democracy. The manner in which the police respond in trying situations is telling of this as often apartheid-era tactics are used. The 2012 Marikana Massacre is one such horrific moment that speaks to South Africa’s disintegration into a police state. Marikana is one of the most painful moments in South Africa’s history as it signified the continued disregard for Black lives under the racist capitalist status quo. Where exploited workers were killed for fighting for their intrinsic right to human dignity. Their lives proving to be disposable to white capital. All this under a so-called “democracy”. If the police as a state apparatus is being used to carry out these acts of violence in pursuit of repression, then how can we trust that SANDF won’t follow suit?

The recurring theme of the state using its institutions (like the defence force, for example) and deploying them to spaces of dissent and struggle is one such occurrence that is not only problematic but deeply concerning as the current political climate continues on a path of turbulence. In recent years, universities have become hotbeds of political consciousness with conversations around free decolonised education and institutionalised oppression taking centre fold. Even in a public space like that of a university, we now see increased militarisation in hopes of silencing student movements and creating an environment of fear. Yet another apartheid-era tactic.

The Cape Peninsula University of Technology currently is surrounded with barbed wire and private security. Last week, the University of Cape Town resembled a war zone. Universities across the country have resorted to militarisation (both private and “state-sponsored”) in hopes of quelling disruption. And it is this measure that must be strongly interrogated. How is deploying the armed forces an option to solve the legitimate socio-economic and political issues that the most marginalised are faced with? In a country that continues to be heralded as “progressive”, it is these authoritarian-like responses that make us believe otherwise.

The mere presence of the security forces (including the police and private security) on university campuses nationwide have exacerbated violence on defenceless and unarmed students. In fact, armed forces have themselves been perpetrators of sexual violence.

Our continued disregard for poor Black lives, as a society, is sordid and indicative in how we respond to the legitimate cries of the most marginalised.

How is the military going to solve systemic issues like that of economic marginalisation, dispossession, poverty, landlessness, displacement, gender-based violence as well as the essential bread and butter issues on the flats? How is militarisation going to help us confront the trauma of our past? A trauma that tore communities and families apart. A trauma that disrupted our collective sense of belonging and identity. A trauma that has ever-lasting psychological effects that still haunt us today.

Militarisation in response to high levels of crime has largely failed in South America with countries like Brazil, Columbia and Mexico witnessing increased levels of violence and larger networks of corruption including law enforcement who, in fact, work with gangs. The SANDF cannot become the solution in response to the largely ineffective, politicised, corrupt and mismanaged police apparatus in South Africa. Just last year, a top police colonel (Chris Lodewyk Prinsloo) was sentenced to 18 years in jail for selling an estimated R9-million worth of lethal illegal weapons and ammunition to Cape Flats ganglords.

Cape Town remains a deeply segregated city, with the rich living in bubbles of comfort and opulence while the poor are stuck in unending cycles of poverty, violence and continued dehumanisation. This is due to the decades of social engineering and apartheid spatial legacies that we have yet to address. It is these very legacies that begs to question the overwhelming support by community members to militarise the flats as an act out of sheer desperation rather than an endorsement of the defence force. And how is it that we resort to strong-arm tactics as opposed to dealing with the deep-seated issues that communities on the Cape flats face? DM