Op-Ed: Have the students just been handed a debt sentence? 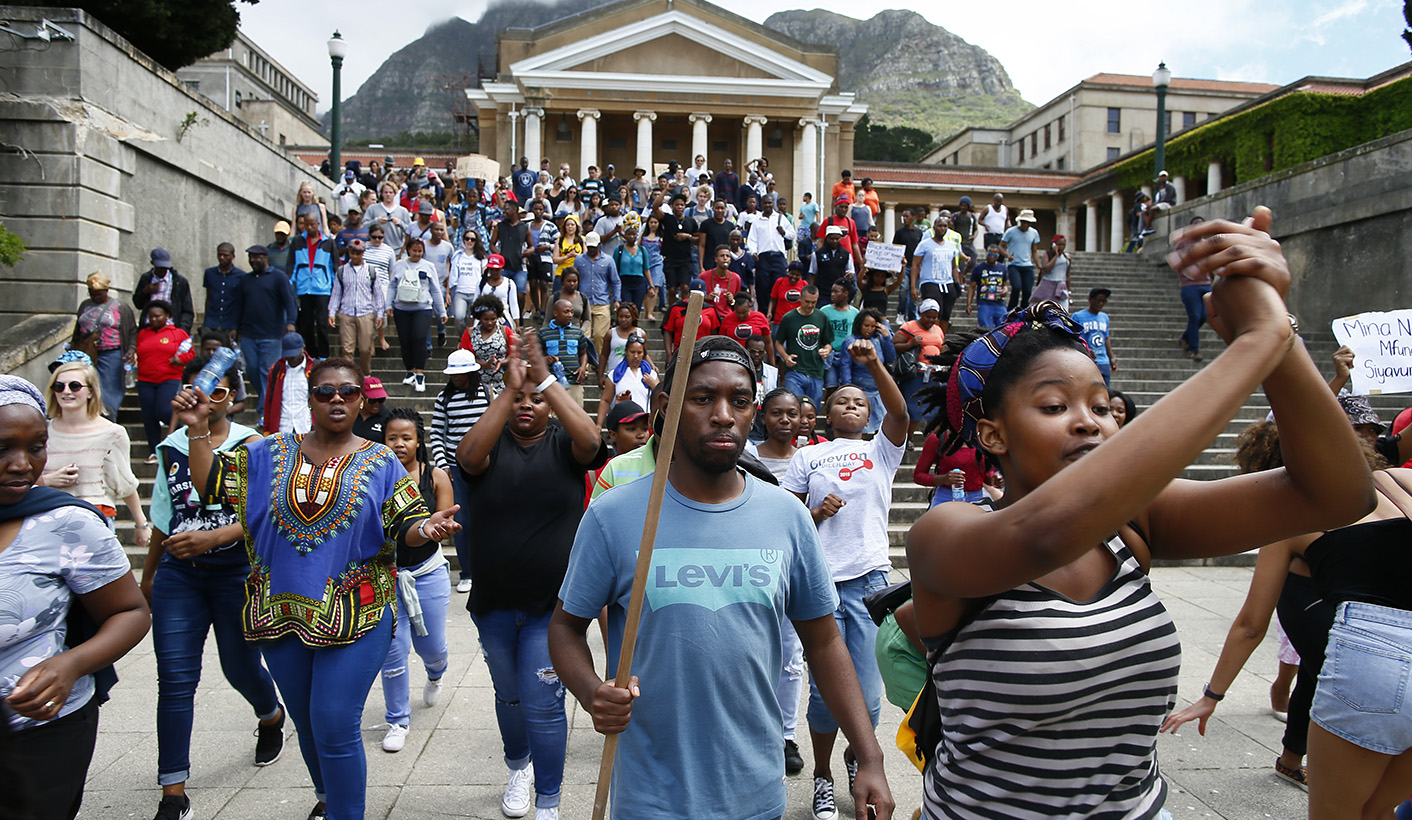 It has been a long two years since the inception of #FeesMustFall, fighting the double-headed beast of state actors that have either used silence or used the movement as a political football in response. By TARRYN NAUDE.

As a former student who has been a body within the mass of student activists, there have only been two notable government responses for me prior to the Heher Commission, the first being the infamous picture of the previous Minister of Higher Education, Blade Nzimande, looking trapped, perplexed and fearful behind the bars of the parliamentary precinct as he stared at the student collective on 21 October 2015. The second was the quick-fix politically opportunistic pacifier that was the zero percent fee increase for 2016.

The economics of the 752-page findings of the Heher Commission will be unpacked on many platforms by actors from numerous factions, but what are the feelings and responses to this proposed fee structure of some of the students, particularly those comrades who have been breathing the stun-grenaded air on the ground since the inception of the #FeesMustFall movement?

Many student activists have always been cognisant that government and university managements will attempt to demobilise the unity of the Fallists using the divide and conquer tactic. It has become apparent, while in conversation with some of these original FMF student comrades that were involved in different capacities and platforms and their varying responses, that the release of this report has finally succeeded in this.

Alex Hotz, an LLB student who has been a central FMF frontline activist at UCT since 2015, expands on this by saying that this is not a victory at all for the movement as it’s not free education for all but for a small capped bracket. The proposed 400,000 bracket of a chosen few “is going to sow disunity and division among students around who gets to ‘fit in’,” Hotz says. She believes that this report will hurt the movement quite badly considering how angry the students are and the extent of the fatigue, including herself, that has come with physically placing their education and bodies on the line for the past two years. There is a feeling that after a prolonged period of heightened student activism, government and these commissions are not listening to the cries of the students and there comes a time when “we actually just have to graduate”.

Rorisang Moseli, the UCT SRC president for the last 18 months of the movement, echoes the disappointment and frustration, considering the level of student activism seen in FMF, at the commission returning to issues that have already been addressed with proposed solutions under the FMF banner over the last few years. Moseli expresses the level of betrayal felt by answering student protests about high levels of indebtedness with a fee-free education model that involves an income contingent loan model and redirecting money away from social welfare; ultimately creating just more indebtedness. He agrees with Hotz in that, when one looks at the timing of the release coinciding with university examinations, the report is an “immobilising tool”, but states his belief that “this will not be the death of the movement” and that once people have settled, processed and understood what this report means and government’s pending decision on the proposed structure, the country will see more student mobilisation.

A former student leader at Stellenbosch, Ziyanda Stuurman, sees the findings themselves as a victory and progress for the movement as the outcome of the report creates an opportunity for students to either work with or reject, “rather than an endless loop of ‘will they/won’t they’”. Stuurman hopes that the ideal response of students will be to have a national gathering involving work-shopping where new strategies, more options and further analysis to continue the struggle for free education will be developed.

A former UCT student, who has asked to remain anonymous due to a perceived conflict of interest around the politics of FMF on a formal level, but was actively involved on the ground during the 2015 protests, thinks that it’s a victory that students have encouraged serious government enquiry into the problem of fees. Despite his earlier involvement in FMF, he doesn’t support free education in principle and so in that regard he thinks the report confirms a lot of what he has come to believe. This former student, however, does agree with the feeling that the president’s handling of the issue and the rumours surrounding a free education programme are “deeply opportunistic and a cynical use of a (relatively) virtuous movement”.

In conversation with these day-one student activists, there is a common trend of taking a step back from their varying capacities of involvement due to either the shifting agendas and the penetration of partisan political agendas or just an overwhelming fatigue at the continuous anger, frustration and silencing of the government structures. Some of the FMF “veterans” feel the FMF of today does not resemble the movement laboriously birthed in 2015 but the call for free decolonised education for all is still the central protest song. What this means for the longevity and strategies of the movement is yet to be seen. However, the narrative that must be made clear among all this political tumult is that higher education needs to be seen and fought for not just as a right or a public good but a non-negotiable development tool.

The FMF I got to know in the occupied administrative buildings of UCT didn’t just stand with students, but the workers and other marginalised groups within the system. With that reminder it must be made clear that the report’s recommendation of cutting social welfare funding to redistribute to a fee-free education model goes against the very heart of the FMF body; the non-negotiable protection and development advancement of South Africa’s poor.

This movement is an undefinable force navigating constantly shifting political and economic discourses, and I cannot speak on behalf of the entire collective considering the multiple varying responses, but there is a beautiful window of opportunity for new strategies and creative proposals with this narrow but new space for negotiation for both the private and government financial sectors.