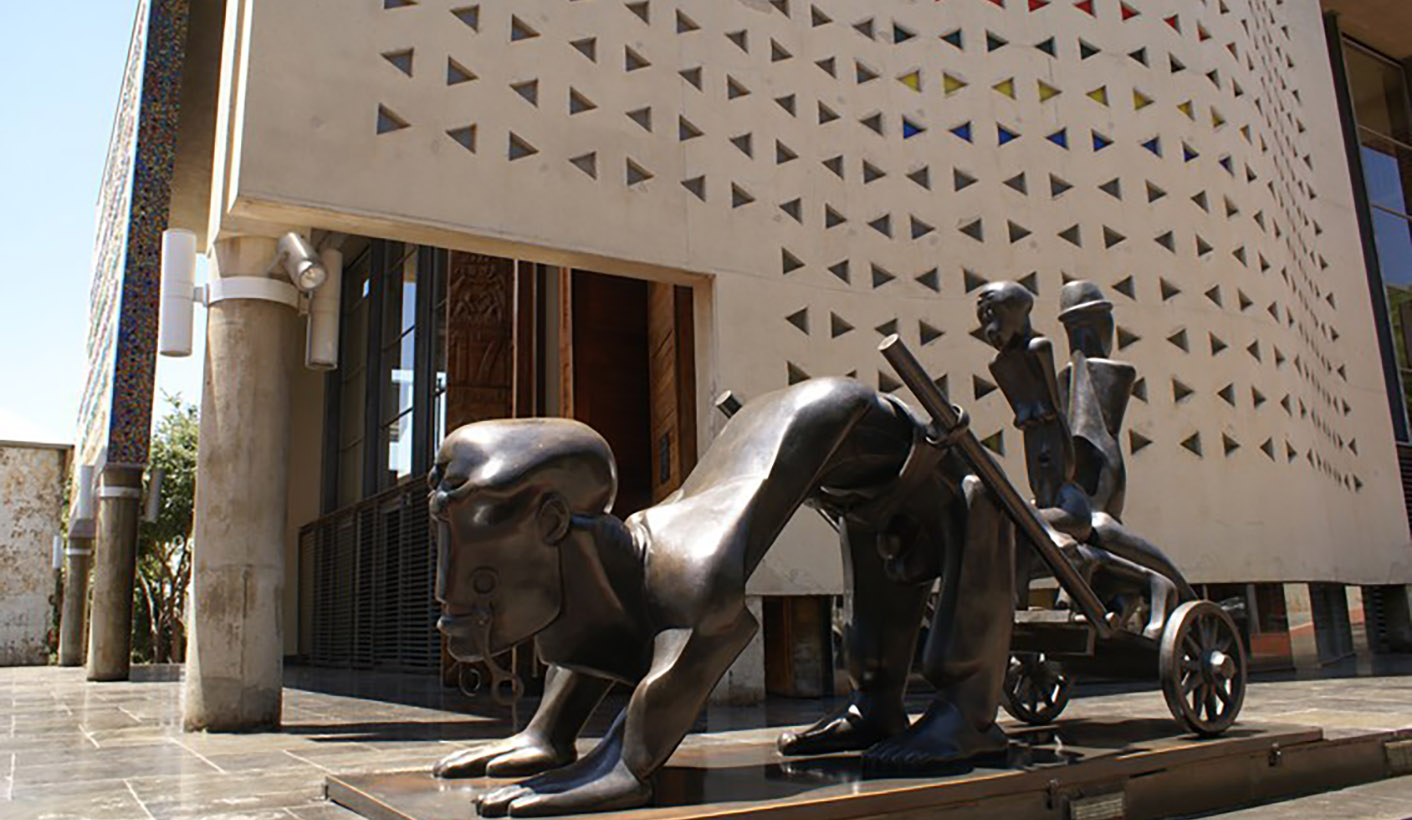 Perpetrators of sexual assault from years ago: beware. Following arguments heard on Tuesday, the Constitutional Court looks set to rule in the near future that sexual offences dating back more than 20 years can still be prosecuted. If so, it would mean at least one positive aspect has emerged from the tarnished legacy of billionaire stockbroker Sidney Frankel – whose alleged victims have carried this matter through the courts. By REBECCA DAVIS.

Sidney Frankel was a pillar of Johannesburg society: a successful businessman, a friend to politicians, and a generous donor to good causes. He was also – as previously noted by Kevin Bloom in Daily Maverick – a trustee of Constitution Hill, the former apartheid prison precinct which now plays host to South Africa’s Constitutional Court.

On Tuesday, it was the now-deceased Frankel’s darker legacy that brought lawyers and judges to the Constitutional Court. Frankel is accused of having sexually assaulted eight children aged between six and 15 between 1970 and 1989. While criminal charges can no longer be brought against him, the case is likely to cause a critical change to law: allowing for sexual offences to be prosecuted if more than 20 years have passed since the crime was committed.

“Now this procedural barrier that existed in the letter of the law is hopefully history,” Lawyers for Human Rights’ Sanja Bornman told Daily Maverick on Tuesday.

The “procedural barrier” she was referring to has been the fact that up till now, the Criminal Procedure Act has barred acts of sexual assault from two decades ago or more from being prosecuted. This has not been the case for all old sexual offences: if the crime in question was human trafficking, rape, or using children or the mentally disabled for pornography, it could still be prosecuted. The fact that there is no legal “expiry date” on rape, for example, is what would allow singer Jennifer Ferguson to bring charges against football boss Danny Jordaan more than 20 years after the fact.

Lawyers for Frankel’s alleged victims, joined by groups including Lawyers for Human Rights, successfully argued in the Johannesburg High Court in June that it was an “arbitrary distinction” to exclude sexual assault from the crimes still able to be prosecuted.

One of the important factors that the High Court took into consideration was that it is more common for people to disclose child sexual abuse when they are adults rather than children – by which point, much time may have passed. The High Court considered a report by researchers Karen Muller and Karen Hollely which noted that reasons for a child being reluctant to speak out about sexual abuse at the time of the crime may include fear of the perpetrator, or feelings of loyalty towards the perpetrator. If the victims are male, the report stated, there are “additional unique barriers”, such as social shame.

In June the judge found that the notion of treating sexual assault as less severe than rape was outdated and patriarchal, given that trauma as a result of non-penetrative sexual offences may be just as severe.

The June High Court ruling also determined that prosecutions should be able to take place 20 years or more later in cases involving adults as well as children. Stated Judge Clare Hartford: “There appears to me to be no reason why these same traumatic symptoms and pressures would not apply equally to persons who are not children at the time of the commission of the offences.”

The Constitutional Court is now tasked with deciding whether to confirm that the section of the Criminal Procedure Act which prohibits prosecution of old sexual assaults is unconstitutional immediately, rather than waiting 18 months for Parliament to amend the legislation. Justice Minister Michael Masutha has opposed this, asking instead for more time – 24 months instead of 18 – for Parliament to do its business.

“The only point of disagreement [between the state and applicants] at this stage seems to be remedy,” Bornman says. “The state thinks the order of unconstitutionality should be suspended to give Parliament a chance to rectify the law. The applicants and amici curiae [friends of the court] believe the necessary changes can be immediately read in by the court, without any suspension.”

In court on Tuesday, the Justice Minister’s advocate Steven Budlender told the judges that the minister accepts that the section of the Criminal Procedure Act in question is unconstitutional. The reason given by the state in its heads of argument for wanting Parliament to be given time to amend the legislation is due to concerns over the perception that the judiciary might seem to be overriding the legislature: in other words, encroaching on the separation of powers.

On the other side, advocate Anton Katz argued on behalf of the so-called “Frankel 8” that the provision of the Criminal Procedure Act should be declared invalid immediately by the Constitutional Court in order to ensure that “the rights of many would immediately be protected, even if only symbolically”.

Following Tuesday’s arguments, the Constitutional Court will deliver a ruling on the matter in the near future.

But as Bornman points out, even an amendment to the legislation does not necessarily mean that South Africa will suddenly see a tidal wave of justice engulfing past perpetrators of sexual assault.

“Unfortunately, social and even economic barriers to justice will still be there,” says Bornman, citing stigma, secondary trauma for victims, under-resourced courts and poor police investigation as ongoing obstructions.

Successful prosecutions for crimes committed so long ago may also be hard to achieve. Challenges here would include the loss or decay of forensic evidence, and the fallibility of witnesses’ memories after many years.

“But it’s important to understand that prosecutors will always still have a discretion to prosecute based on the strength of a docket. The absolute bar to prosecution has hopefully been lifted, and the NPA [National Prosecuting Authority] will now be free to apply its mind to cases regardless of how much time has gone by,” Bornman says.

“Prosecutors should not be legally barred from prosecuting strong cases just because of an arbitrary lapse of time.” DM

Photo: The Constitutional Court is examining the question of time limits on prosecution of sexual offences. Archive photo: Ciaran Ryan/GroundUp.