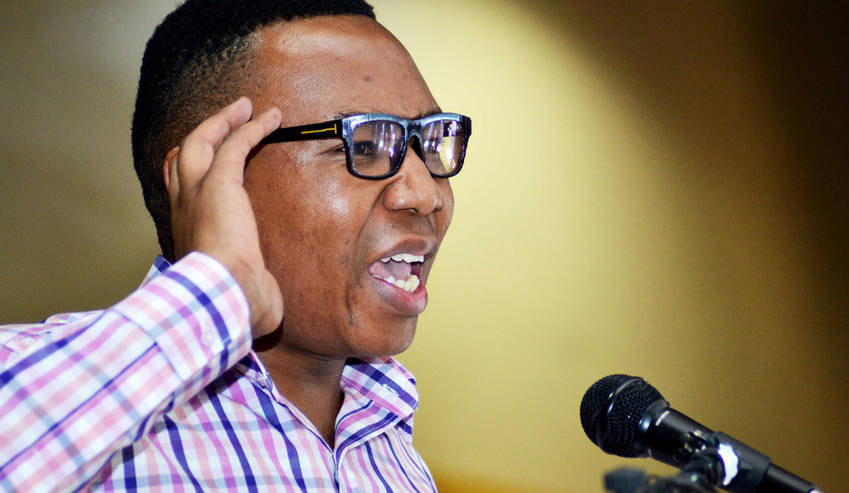 The former higher education minister has avoided a prison sentence for assaulting three women and remains a Member of Parliament. His case brings into question the process of criminal sentencing, which remains unpredictable. By GREG NICOLSON.

EFF supporters crowded around Mduduzi Manana’s luxury government vehicle as he left the Randburg Magistrates Court on Monday. They chanted “abuser”. They’d already scuffled with supporters of the ANC Youth League, who, in mostly identical T-shirts and looking the image of a rented crowd, chanted back, “The Leader”.

The EFF wanted a harsher sentence for Manana. The ANCYL applauded the announcement that he wouldn’t go to jail. Two Forum 4 Service Delivery members stood on the side of the EFF looking perplexed on the national political stage.

Manana was sentenced to 12 months in prison or a R100,000 fine for being convicted of three counts of assault with intent to cause grievous bodily harm. In September, he and two friends beat up three women in a Johannesburg nightclub. He’ll have to do 500 hours of community service and enter an anger management programme, but he’ll never serve time: His lawyer said that he could pay the R100,000 on Tuesday.

Manana’s case once again brings up sentencing contradictions, those related to class and power as well as the more arbitrary decisions of judges in courts across the judiciary.

The former deputy minister declined to talk to the media after his sentencing, saying he would release a statement, which we hadn’t received by the time of writing. A contact linked to the victims, Noluthando Mahlaba, Monoisa Duma and Thina Mapipa, said their families weren’t yet ready to comment.

Shortly after the EFF and ANCYL faced off, National Prosecuting Authority (NPA) Gauteng spokesperson Phindi Louw said, “As the NPA we are satisfied with the sentence handed down today.” She said it proved no one is above the law and that violent actions against women will not be tolerated. Louw said the court must take into account a number of factors during sentencing and Manana had “manned up to his faults” and pleaded guilty, avoiding wasting the court’s time.

While Manana initially avoided taking responsibility for the attacks, once a video emerged of him assaulting one of the victims at the Cubana nightclub in Johannesburg he played his cards well to avoid a prison sentence.

He pleaded guilty, resigned from his Cabinet post, increased his philanthropic activities, voluntarily signed up for counselling and expressed a desire to meet with and apologise to his victims. All of these factors counted in Manana’s favour. Magistrate Ramsamy Reddy found that he could be a productive member of society, which would not be benefited by his incarceration.

Reddy said Manana had been charged with serious crimes and his victims would carry their humiliation for the rest of their lives. In public, Manana pushed the women to the ground, pulled their hair, kicked and punched them. The magistrate also ordered Manana to pay over R26,000 in expenses the women incurred as a result of the attacks.

The former Cabinet official, in the main, received the sentence his counsel asked for. He wasn’t sentenced to house arrest, which he’d argued would have limited his work as a politician, even though the prosecution said he would still be able to attend Parliament and go to political meetings.

House arrest, or correctional supervision, would have limited him from drinking alcohol, which was repeatedly mentioned as a key factor in the attacks. But the magistrate didn’t mention limiting his drinking. Reddy didn’t order Manana to pay R100,000 compensation to each of the victims, which they’d requested (although a civil case against him can still be laid). Reddy denied Manana his request to be able to obtain a firearm licence.

The #NotInMyName group supported the victims at each court appearance and its chairperson Siyabulela Jentile said on Monday, “I’d be lying if I said I was surprised by the sentencing. Welcome to South Africa.” He said Manana’s expressed remorse was false, as exhibited by his ANCYL supporters who cheered his success in the courtroom and who had on other occasions allegedly intimidated the victims. “This case is one of high profile. We were hoping it was going to set an example,” said Jentile.

Mandisa Mashego, EFF Gauteng leader, said, “Our worst fear has come to life.” She said the sentence showed that wealthy men with a high standing in society can commit any crime against black women and get away with a light punishment. “Nothing justifies the sentencing. It’s not rational and it’s going to do nothing for us as black women.” She said the EFF would see if it could review the case and if not, potentially embark on mass action, for these victims and others.

Mashego referred to recent cases of violence against women. “Why would they not treat us as animals if they can’t send this message?” she asked.

There seem to be countless examples of criminal cases where the sentences for similar, or sometimes starkly different, crimes don’t make sense. Criminal expert Advocate James Grant said on Monday, “I don’t know what to expect in the current sentencing system. It just doesn’t compute in my mind,” said Grant. He noted the recent sentencing in the “Coffin Case” where Willem Oosthuizen was sentenced to 11 years in prison and Theo Jackson to 14 years for forcing Victor Mlotshwa into a coffin. They were found guilty of assault with intent to cause grievous bodily harm‚ attempted murder‚ intimidation and kidnapping. Grant said it’s hard to compare cases, but was surprised at the “utterly non-custodial” sentence Manana received.

He said the sentencing framework needs to be revised and the issue has been repeatedly pointed out. He said the judiciary must consider recommendations to adopt a grid system that could take into account a wide range of considerations to apply consistent sentences, which is far more comprehensive than a minimum-sentence model. DM