Analysis: Zuma risks sacrificing higher education at the altar of his ego 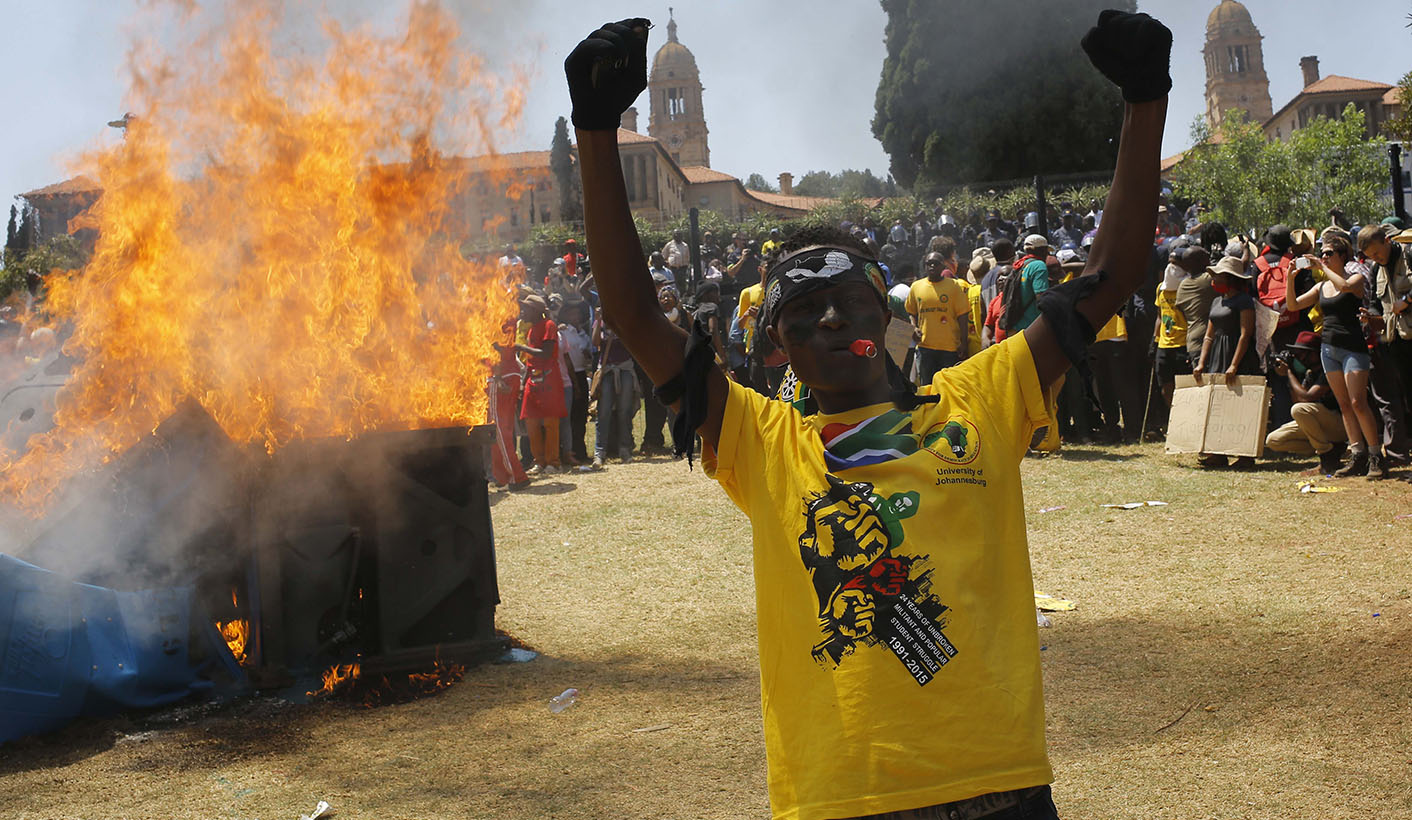 President Jacob Zuma is reported to want to introduce free higher education. The poor and middle-class might rejoice, but Zuma’s plans will only worsen their plight. By GREG NICOLSON.

Police dressed in riot gear and behind a wall of shields let off one stun grenade after another as students pushed forward to tear down the fence at the Union Buildings. The phalanx of cops huddled together as they were pummelled with stones. Portable toilets were burning in the gardens at the home of the Presidency. Students demanded that President Zuma address them, but he never came.

The #FeesMustFall movement shook both the President and his government when tens of thousands of students marched on the Union Buildings over two years ago. The large majority were peaceful. They were motivated, on that day and in the many protests at institutions across the country since the arrival of democracy, by the promise of free, quality, decolonised higher education.

They either were, or stood in solidarity with, students from poor and middle-income homes who have to sleep in the library, who regularly have to skip meals, who have to delay or drop out of their studies because their families can’t cover their fees. They wanted the ANC to deliver on its promise of free education.

The country needs to revise its higher education funding model. That’s never been in question. Students, administrators and the government agree that the current system needs to be improved. The question is, how?

President Zuma established a commission of inquiry, as he likes to do, to assess the feasibility of fee-free higher education. You can read the submissions. The report hasn’t yet been released, but according to City Press retired Judge Jonathan Heher recommended that the government spend a fixed 1% of GDP on universities and implement an income-contingent loan system, with students repaying the costs of their studies depending on their salaries once they find employment.

President Zuma, as he likes to do, appears to want to bypass the recommendations of the inquiry he established. It’s been reported that he plans to introduce free higher education for students from households with an annual income of up to R350,000, beginning in 2018. Minister in the Presidency Jeff Radebe, who heads the higher education funding task team, and Zuma’s director general Mpumi Mpofu, have been tasked with finding the money to pay for the plan.

Zuma denied on Sunday that he wanted to announce free education in the February State of the Nation Address. “At no stage did he plan to make any announcements that would undermine the work of the commission,” said a statement from his office.

But reports said Zuma’s demands that officials find the money to fund his plan have further strained his troubled relationship with the Treasury. According to the Sunday Times, Michael Sachs, the Treasury’s deputy director general of budgeting, threatened to resign if forced to implement the plan, while there are other claims that the President is undermining Finance Minister Malusi Gigaba’s Medium Term Budget Policy Statement (MTBPS).

Gigaba’s Medium Term Budget Policy Statement, tabled in October, estimated that free higher education could cost between R17.7-billion and R40.7-billion depending on how it’s implemented, which would increase if the government implements plans to get more students into higher education institutions. Gigaba said further announcements on the issue would be made in his February Budget speech.

Those students who marched on the Union Buildings, their institutions, civil society organisations and government departments probably spent weeks preparing their submissions to the Heher Commission. The judge dutifully interrogated dozens of submissions in public hearings. His report runs to 748 pages.

But Zuma placed his future son-in-law’s advice above Heher’s recommendations and those submissions. Zuma’s “adviser” Morris Masutha, a founder of the Thusanani Foundation, which works to assist youth in accessing and succeeding at university, appears to be the sole voice the president is listening to. He’s claimed the state can provide free university education at a modest R7.5-billion.

Many protesting students have said they aren’t fighting for themselves but the next generation, so their prospects of success aren’t limited by their background, be it race, culture or class. But as they write their exams and look to a new academic year, they should be sceptical of the President’s plans.

Zuma didn’t address them that day at the Union Buildings in 2015, which ended with rubber bullets and tear gas being fired at students by police. While the ANC has long said it supports free education for poor and working-class students, Zuma appears to have disregarded submissions by those very same students and their institutions. He’s ignored the advice from his own government and even his own party.

Most worryingly, there’s been no public discussion on where the money will come from to fund the additional budgetary expenditure of up to R40-billion. The state already has a revenue shortfall of R50.8-billion and potential credit downgrades could ensure that economic growth remains stagnant.

The government could save billions by reducing irregular, wasteful and fruitless expenditure, but if he wanted to, Zuma could have implemented measures to enjoy those savings years ago. Instead, officials are looking to slash budgets across already under-resourced government departments.

The Mail & Guardian reported: “Cuts to grants and housing, halving the armed forces budget, curbing infrastructure spending and freezing civil servant wage increases are some of the options that have been put forward. An increase in the value-added tax rate is also a possibility, as is the sale of state assets and reducing the number of departments.”

Zuma may want to proceed with free higher education despite Heher’s recommendations, but there must be a transparent discussion on the details of who will be funded and where the money will come from. Zuma neither listens to his own party nor the recommendations of his Cabinet. If he’s allowed to implement his plan in isolation, higher education will probably end up in tatters, burnt at the altar of his ego. DM