Zimbabwe: First Lady Grace set to get the nod for second top party post, alongside Mugabe 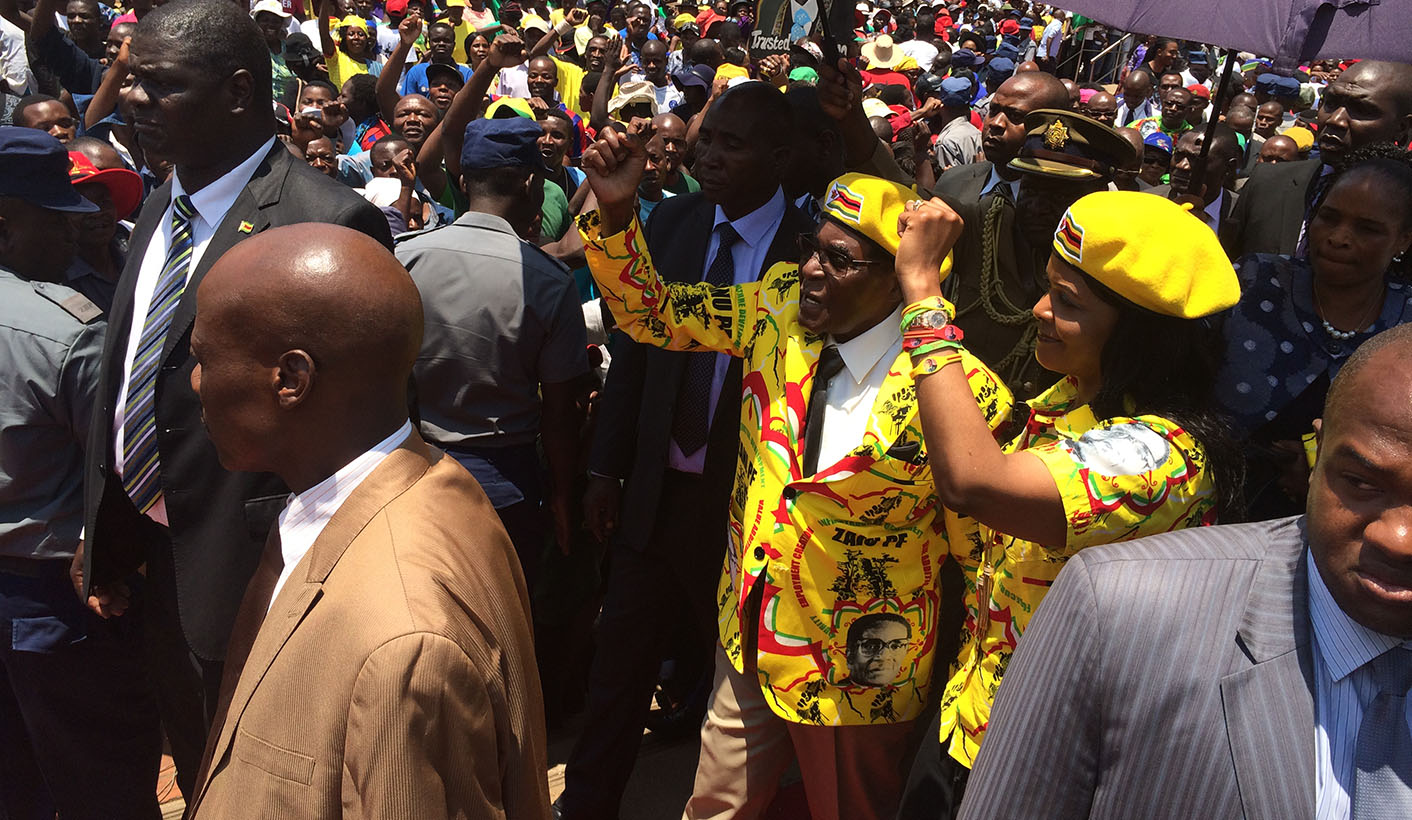 President Robert Mugabe’s wife Grace Mugabe was endorsed on Wednesday by all 10 provinces, including the women’s and youth leagues, as their chosen candidate for the vice presidency post at a youth rally held in Harare. This will see the ruling party’s constitution being ammended to provide for a woman candidate in the presidium. By SALLY NYAKANYANGA.

In 2004, Zanu-PF made a provision in its constitution for a woman vice president, which was changed 10 years later when Joice Mujuru was ousted from the party on accusations of plotting to replace Mugabe. This paved the way for the elevation of the now former vice president Emmerson Mnangagwa, who served less than three years before being booted out on similar accusations.

Speaking at the Zanu-PF youth rally on Wednesday, youth leader Kudzai Chipanga said the youth were behind Grace Mugabe as the right candidate for the vice presidency due to her loyalty to the President as well as being motherly to everyone.

“As our president we know you respect the rights and role women played even during the liberation struggle but we are seeing the politburo and presidium dominated by men. What is stopping you from re-amending the constitution to pave way for a female vice president,” said Chipanga.

The sacked vice president is said to have tried to skip the country into Mozambique, but in vain. A statement from somebody that some believed to be Mnangagwa was circulating on Wednesday on social media, citing that he (Mnangagwa) had left the country after receiving death threats.

Speaking at the youth rally, Minister of State in Manicaland Province Mandi Chimene said, “He (Mnangagwa) thought running away will do but you can’t leave Zimbabwe that easy.” She added that Mnangagwa’s Lacoste faction team, still in various ministries, must be sent packing and dealt with.

Zanu-PF political commissar and minister of local government Savior Kasukuwere offered the same sentiments at the rally. “We didn’t know we have a border jumper in the presidium,” Kasukuwere said.

During the youth rally, Dickson Mafios, Masholanand Central provincial chairperson, said the sacking of Mnangagwa was long overdue and comes as a relief.

“As a lawyer we thought he understands the party constitution that you don’t go and forcibly take power from a president who appointed you, but you wait for the right time to come, follow the correct and democratic process,” says Mafios.

In his speech, President Mugabe said, “Some will cry, saying they have lost their leader (Mnangagwa) because your leader strayed from the values and direction of the party, falling in the same trap that saw the ouster of Mujuru.”

Mugabe added that Mnangagwa was not an infant in the party, but stooped so low by doing things not in line with the party’s principles and values.

The ball is now on the “one centre of power”, as was the slogan at Wednesday’s youth rally to implement the will of all 10 provinces including the women’s and youth leagues, to confirm Grace Mugabe as Mnangagwa’s replacement.

Grace Mugabe in her speech said, “I will help him (President Mugabe) to make the country prosper.”

Robert Mugabe hinted that the resolutions and recommendations will be discussed and looked into at the coming congress. These include the endorsement of his wife by 10 provinces, including the women’s and youth leagues.

Meanwhile, the Zanu-PF politburo had a special meeting after the youth rally, which was expected to finalise the fate of Mnangagwa.

While the ruling party leadership and its supporters were celebrating the ousting of Mnangagwa together with his allies, life for ordinary Zimbabweans continues to worsen. The southern African country continues to face myriad challenges such as cash and foreign currency shortages, unemployment and an unprecedented increase in goods and commodities.

Daily Maverick spoke to fruits vendor and father of three children Tichatonga Munyikwa, 52, who highlighted how the infighting in the ruling party makes him unsettled and that the state was not addressing the real issues affecting the country.

Munyikwa has been greatly affected by the cash shortages as he has been unable to send his children to school. “No one is taking our issues as our leaders are busy chasing each other. There is need for a change of government to enable development and progress in the country,” Munyikwa added.

Terry Mutsvanga, a human rights activist based in Zimbabwe, did not have kind words for the ruling party. “As long as the lion is devouring its own cubs, it doesn’t matter to me because for 37 years these people have been together and have been eating from the same trough, they have to clean their own mess alone so it won’t affect the ordinary Zimbabwe,” said Mutsvanga.

Mutsvanga encouraged Zimbabweans to register to vote in their numbers for the 2018 election and ignore the infighting if their plight was to change. “In fact, the fighting is a diversion from the urgent matters affecting the country,” Mutsvanga said.

The greatest fear among worried Zimbabweans was the possibility or even likelihood of a war. DM

Photo: Robert and Grace Mugabe at the Zanu-PF headquarters during the youth rally held in Harare on Wednesday. Photo: Sally Nyakanyanga.