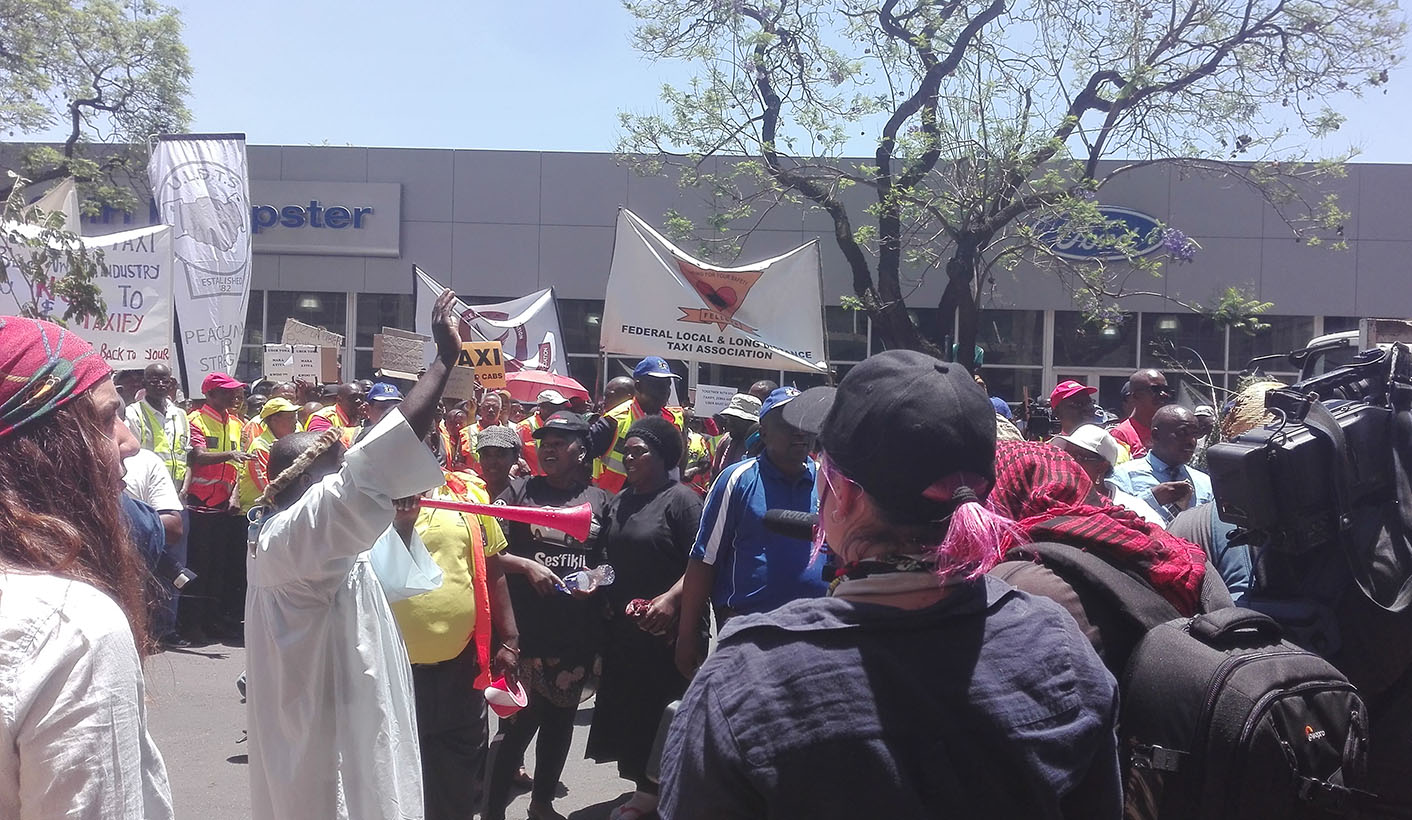 The National Taxi Alliance has reminded Minister of Transport Joe Maswanganyi that he is just a servant of the citizens. By ORATENG LEPODISE.

“Joe is not our boss, he is our servant; instead of being grateful for the privilege to serve he is being boastful,” said Mohanoa Francis Matsitsa, the president of the National Taxi Alliance (NTA) during a protest by taxi drivers in Pretoria on Wednesday.

On Wednesday the NTA embarked on a national protest, bringing Pretoria to a standstill and leaving thousands of commuters with no means of transport.

“This is so frustrating. I have to pay more than what I pay to get to work, because they were no operating taxis. I had to use an Uber which charged me ridiculous amounts of money,” said Portia Matlala, a commuter who relies on taxis for transportation.

The NTA, which represents the drivers and owners, warned Maswanganyi to stop playing games with them. “They need to be reminded of what money does, it destroys people like it did with Judas; he shall reap the consequences of his actions,” said Matsitsa.

The NTA accused the minister of failing to deal with issues affecting the taxi industry as they had raised their grievances numerous times before to the minister.

This protest follows one that took place in August where taxi drivers brought the capital city to a standstill. At that time they made their way to Tshwane House to deliver their memorandum with the same demands. The initial protest was cancelled in October after the NTA adhered to the minister’s request to hold negotiations with the taxi industry.

The NTA accused the minister of playing games. “We are not going anywhere. You can hope and wish that the taxi industry will disappear but we will never disappear,” said Matsitsa.

The NTA assured Maswanganyi that this was not a threat. “You will regret the day you ignored the NTA. All of them [referring to previous transport ministers] have been fired in their numbers, you will also face the same thing,” Matsitsa said.

In their 40-page memorandum, the taxi associations demands were, but not limited to:

“I feel as though the taxi owners are selfish; they only mentioned the issue of tickets which is the only issue that affect us drivers. Other demands are to suit them as taxi owner,” said Mxolisi Rakgalakane, chairperson of the Menlyn Taxi Association.

“The taxi industry is flourishing because of us taxi drivers, our owners should at least create short courses for drivers so that if the taxi industry ends they can have means of creating an income,” said Rakgalakane.

The protesters called on President Jacob Zuma to fire Maswanganyi. The strike ended at the Union Buildings after Mandla Feni from the Presidency accepted the NTA’s memorandum.

“You are not only killing the taxi industry but you are killing our children and we shall not allow that, you will only do that on our death beds,” Masitsa stated.

“Our challenges have been put to many ministers that came to the Department of Transport, and they have failed to address these issues adequately,’ said Theo Malala, spokesperson for the NTA.

The NTA gave the department 21 days to respond.

“We are not happy because the minister was not here to accept the memorandum,” said Puleng Moloi, a taxi owner.

“We have issued countless memorandums and have given Maswanganyi an ultimate – if there is no response within 21 days we will decide on further steps to take.”

The taxi industry is the biggest transport sector in Pretoria, transporting approximately 70% of locals daily.

The strike on Wednesday was spoiled by intimidation of motorists and blocking of roads by the protesting drivers which led to stun grenades being fired by police on the intersection of Paul Kruger and Bloed to get the protesters to clear the road.

“The second and subsequent phases will be following, and finally if all fails we are going to end up in the highest court in this land,” warned Masitsa. DM

Photo: National Taxi Alliance gather outside the National department of transport to deliver a memorandum of demands. Photo: Orateng Lepodise.