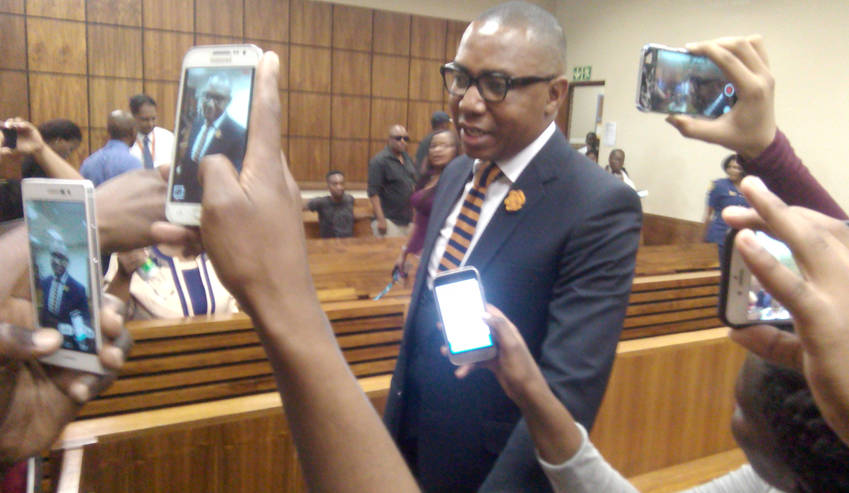 It’s unlikely Mduduzi Manana will go to jail. That became clear as his sentence for assaulting three women was debated in the Randburg Magistrate’s Court on Wednesday. By GREG NICOLSON.

Judgment on former higher education and training deputy minister Manana’s sentence was reserved on Wednesday after the prosecution and defence spent the day sparring over a suitable punishment. Both teams advised against direct imprisonment and the magistrate will deliver the sentence on Monday.

In September, Manana pleaded guilty to three counts of assault with intent to cause grievous bodily harm. He and two friends assaulted three women – Noluthando Mahlaba, Monoisa Duma and Thina Mapipa – at the Cubana nightclub in Johannesburg’s north in August when after an argument one of them called him “stabane”, a homophobic slur.

He pushed them to the ground, pulled their hair, kicked and punched them. At least two other women later came forward alleging Manana had assaulted them in the past.

Prosecutor Anne-Marie Smith called the attack “barbaric” but said, “Direct imprisonment and nothing else is an inappropriate sentence under the circumstances.” She argued, however, that “there must be retribution and society expects more than just a mere doing community service”.

She didn’t suggest the length of a suspended prison term but said it should be suspended for five years, subject to Manana not committing any further violent offences. She said he should serve 1,000 hours of community service and be placed under correctional supervision, house arrest, which would still allow him to work in Parliament, perform community service, and attend political meetings provided he doesn’t drink alcohol.

It was revealed in court that Manana has two previous convictions. In 2004, he admitted guilt to theft and paid a R500 fine. In 2005, he was again found guilty of theft and received a sentence of a R500 fine or one month’s imprisonment. Manana said one of the theft convictions was for stealing a can of Coke. Smith said because the two counts were more than 10 years old and of a dishonest rather than violent nature they don’t count as previous convictions to consider during sentencing.

Manana’s counsel, Michael Motsoeneng-Bill, argued against correctional supervision, arguing that constantly seeking permission from the police for his frequent travels would limit his ability to earn an income. He called for 12 months’ imprisonment suspended for five years, 500 hours of community service, and recommended a R100,000 fine, in addition to the R100,000 compensation requested by the three victims. Both teams recommended he undergo anger management counselling.

“That is punishment,” said Motsoeneng-Bill. He said civil suits are “imminent” and there’s been a recommendation to Parliament to discipline the MP. “We need this individual to give back to society. Detaining him in his house does not serve society.” He also said Manana’s consumption of alcohol doesn’t need to be “babysat” and he should be allowed to apply for a firearm licence because “he could pursue a different vocation that could very well require a firearm”.

Smith said the leeway he was asking for did not amount to punishment and would not help in achieving justice.

Motsoeneng-Bill emphasised the harshness of the word “stabane” and said Manana was also a victim on the night of the attack before he was provoked and became the aggressor. He said all parties were intoxicated and the grievous bodily harm caused was not as bad as it could have been.

“No one assisted her while three grown men were assaulting her,” said Smith on the first victim. When a friend came to help, who hadn’t insulted Manana, he attacked her. Then he attacked another friend who didn’t say anything or intervene. “Not all three of them was involved in the provocation. Only one,” said Smith.

In his statement on Wednesday, Manana noted his foundation’s work helping to uplift female students. Much of the foundation-related activities mentioned were performed after the assaults. By pleading guilty he said he avoided wasting the state’s resources and displayed remorse and regret, as did his resignation from Cabinet. He is also undergoing anger management counselling, having attended one session. “In this regard, I plead for a sentence that has an element of mercy.”

Manana claimed he was not against paying the victims’ estimated medical costs of R28,000 but his counsel said his salary had almost halved since he became an ordinary MP (MPs make a minimum of R1.033-million a year) and he had incurred significant legal expenses. “I admit that I conducted myself in a wrongful and unlawful manner,” said Manana.

In their victim statements, summarised in court, Mahlaba, Duma and Mapipa called for compensation of R100,000 and said Manana needs further anger management counselling. They said they felt humiliated, traumatised and unsafe after the attack and said they will continue to suffer from stigma. Their families said a prison sentence may not address the underlying causes of his violence.

Masisi Modikoane, a probation supervisor in the Department of Social Development, spoke to Manana, his family and the victims and said a prison sentence would not be suitable as she found Manana is in a position to rehabilitate himself and become a constructive member of society.

She recommended he receive a sentence suspended for five years on condition he isn’t charged with a similar crime. She said he should pay medical compensation to the victims and attend a cognitive behaviour programme as well as serve 1,000 hours of community service at the Valued Citizen Initiative. The victims have been referred for professional counselling at no cost, she added.

Manana explained to the probation worker that he attacked the girls because he was called gay, when he is not, and that the term was derogatory. “He in fact admitted knowing and being friends with people who are gay in his social and work environment,” she said. In another instance of violence, earlier this year, Manana was in a public fight regarding his ex-girlfriend and said he was hit with a bottle.

A corrections officer who testified on Wednesday said if Manana were placed under correctional supervision he could continue working, which would benefit his family and make a positive contribution to society. He said this would reduce prison overcrowding and avoid the negative impacts that can come with imprisonment. Manana’s counsel argued that the court should bend the rules of standard correctional supervision to allow him to go to restaurants that serve alcohol, so he can go to political meetings.

Manana resigned from his Cabinet post in August after a widespread public outcry, but remained an ANC MP. He was replaced as deputy higher education and training minister by Buti Manamela. The ANC’s national working committee decided to take him through a disciplinary hearing but it’s unclear whether the process has begun.

EFF Gauteng leader Mandisa Mashego, who was in court on Wednesday, said Manana was egotistical and lacked the remorse he claimed to have. She said the victims came to court on Tuesday but that an aggressive crowd of ANC Youth League supporters backing Manana made the victims uncomfortable. They didn’t return on Wednesday. “The perpetrator-friendly environment in the criminal justice system couldn’t be displayed any better than what I’m describing.”

Themba Masango from the #NotInMyName Campaign, which has supported the victims at each court appearance, said it was extremely disappointing that neither the prosecution, correctional services or department of social development representatives had said Manana should receive jail time. DM