Who is Lord Peter Hain and why are Zupta bots trolling him? 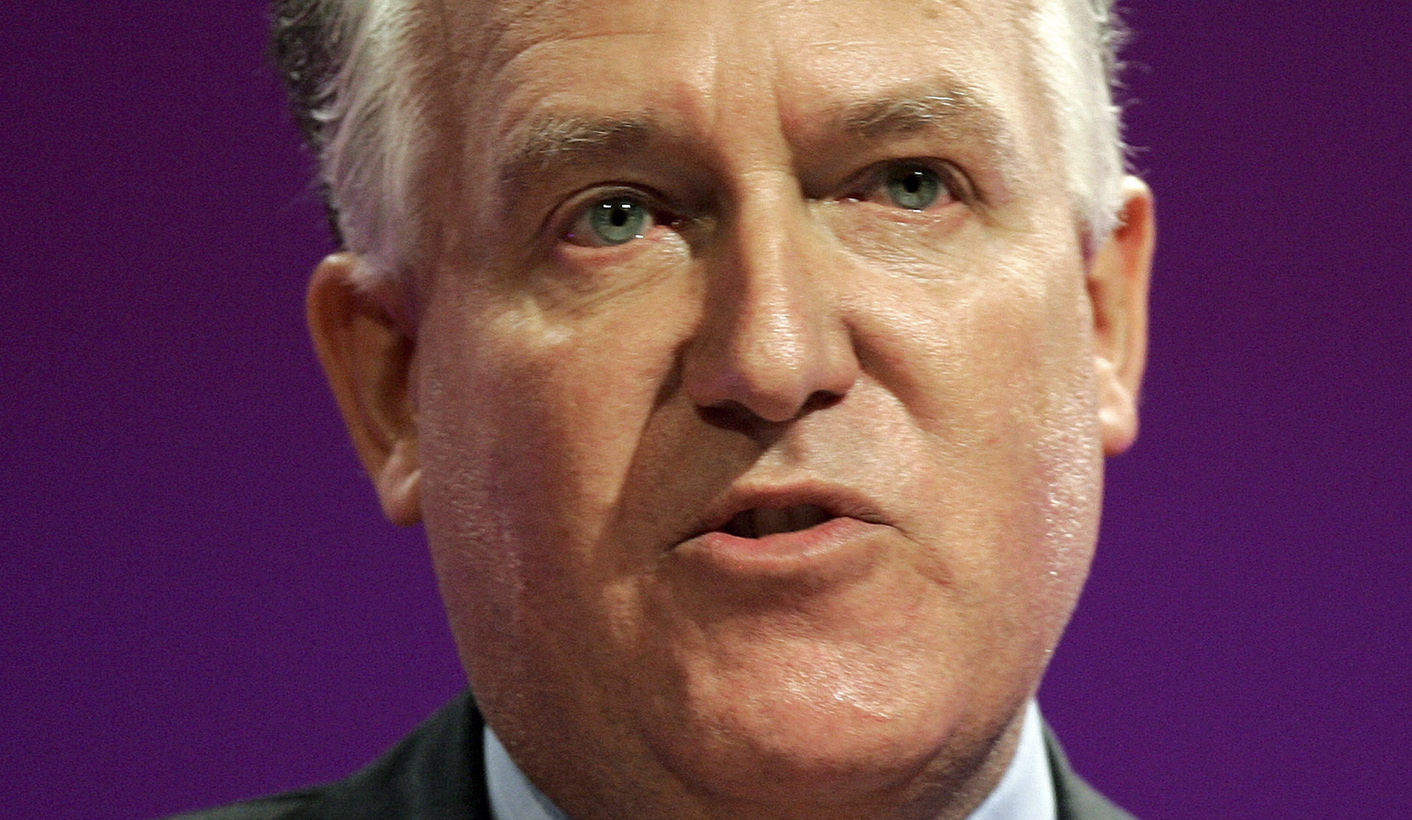 It’s a cliché of course, but those who don’t know history are bound to repeat it. It didn’t take the Zuptabots long to start trolling Lord Peter Hain on Twitter. Hain knows all about it, as did his mother and father, who were both jailed and banned by the apartheid regime. The oppressive state also hounded Hain in London for his work as an anti-apartheid activist and leader in the global campaign to isolate all-white South African sports teams from competing internationally. It was this boycott that eventually helped tip the scales towards democracy. By MARIANNE THAMM.

It was the late teacher, poet, journalist and activist Dennis Brutus, who had been jailed on Robben Island and fled into exile in 1966, who first realised that the apartheid state would find ways around global economic disinvestment and cultural sanctions and boycotts. There were always friends of Apartheid South Africa, such as France, the US and the UK, who were happy to do business with the white minority government and who would later use their veto vote in the UN.

But there was one thing Brutus knew would jolt white South Africa to its very core; if sports teams – particularly cricket and rugby – were kicked out of international sporting bodies and barred from competing internationally, not only at the Olympics but all major tournaments.

There is an episode in the brilliant, 2010 Emmy Award-winning seven-part series, Have You Heard From Johannesburg, by director Connie Field that comprehensively unpacks just how successful the sports boycott was at punishing apartheid South Africa and hastening the hated system’s end.

Titled Fair Play, this episode tracks the origin of the sports boycotts, one of several relentless fronts in the collective national and international assault on Pretoria from the 1960s onwards and one of the most successful. South African teams were prevented from participating in international events until 1991 when the sports boycott was lifted.

Brutus, who died in 2009 at the age of 85, understood that sport was the glue that held white South Africans together. It was “a link to the civilised world”, as he framed it, and severing that link, Brutus had hoped, would get the message across that “they were not welcome in the world as long as they practiced racism in sport”.

Of course this is exactly why Nelson Mandela in 1995 donned the Springbok jersey. It was an extraordinary act of reconciliation, one he of course hoped would mark the beginning of the conscientising and education of white South Africans to the history of oppression and dispossession in which they participated and from which they benefited.

The episode on the sports boycott in Field’s documentary features a clip of Peter Hain, who was 19 at the time and chair of the Stop the Seventy Tour campaign, being interviewed. Activists had successfully disrupted an all-white Springbok Ruby 1970 tour using a tactic Hain had thought up and called “direct action”.

It was a highly effective (and dangerous for the activists) method of immediately stopping play through either storming the pitch waving anti-apartheid placards or strewing thumb tacks and glass on the field.

Direct Action was used also in Australia and New Zealand to prevent whites-only teams from playing in tournaments in those countries.

For that, we have activists like Peter Hain to thank. There were, of course, many, many more allies – some South Africans forced into exile like Brutus and Adul Minty – but for here and now the Zuptabots have focused on Hain.

For them we recommend any of the 21 books he has authored including his memoirs Outside In (London, Biteback 2012) and his parents’ story Ad & Wal: values, duty, sacrifice in Apartheid South Africa (London, Biteback, 2014). Hain’s 2010 biography Mandela will be updated and re-issued next year.

Peter Hain was 16 when his parents Adelaine and Walter, as well as his three siblings, were forced into exile in London in 1966. Peter Hain was born in Pietermaritzburg in 1950 but the family later moved to Pretoria where Hain attended Pretoria Boys High.

In 1961, prior to their exile, both Adelaine and Walter had been jailed without charge and then banned. Adelaine had attended Nelson Mandela’s first trial in the Old Synagogue in Pretoria and each time the young ANC leader entered the dock he would raise his fist in greeting at the lonely and only woman, Adelaine, seated in the “whites-only” reserved section in the gallery. She would defiantly return the greeting.

The Hain family left South Africa after the state had instructed architectural firms not to employ Walter.

Peter Hain was hounded in exile by the apartheid security police, known for their dirty tricks and black ops campaigns. He was prosecuted for four counts of conspiracy involving over 900 particulars in a four-week trial in the Old Bailey financed from South Africa. He was finally acquitted of the three most serious counts involving cricket and rugby protest and convicted with a £200 fine for disrupting an SA-Britain Davis Cup tennis match July 1969.

In June 1972 Hain received a letter bomb in London from the murderous South African Bureau for State Security. A similar bomb was used in 1982 to assassinate activist and scholar Ruth First in Mozambique.

There had been a fault in the trigger mechanism of the letter bomb mailed to Hain which was deactivated by the London metropolitan bomb squad who informed the Hains that the power of the bomb would have destroyed their home.

In 1975 Hain was charged in a peculiar case of mistaken identity for a bank theft of £490 worth of £5 notes at Barclays Bank branch near his home in Putney. He had protested several years before against the bank’s presence in SA. After a two-week trial, again in the Old Bailey, Hain was acquitted. It was revealed afterwards that the thief had been a South African agent who looked like Hain.

Hain, who served as the MP for Neath from 1991 to 2015, and who served in the Labour governments of Tony Blair and Gordon Brown for 12 years, seven in the Cabinet, was introduced to the House of Lords in November 2015.

That year he received from South Africa the OR Tambo National Award in Silver for his “excellent contribution to the freedom struggle”. Hain is Vice-President of Action for Southern Africa (ACTSA) and Chair of the UK Committee for the OR Tambo 2017 Centenary.

In 2007, as Secretary of State for Northern Ireland, Hain helped to negotiate an end to the conflict, bringing enemies together in government in the peace settlement.

Over and above all of this Hain is Chairman of the Donald Woods Foundation charity based at Hobeni, Transkei, Patron of the Canon Collins Trust and Visiting Professor at the University of Witwatersrand Business School.

Hain has never forgotten the country of his birth and has remained deeply connected to South Africa. Which is why he has used his position in the House of Lords to spearhead an international campaign aimed at highlighting the role of global financial institutions who may have been complicit in the laundering by the Gupta family of proceeds of their extensive capture of the South African state through President Jacob Zuma, members of his family, as well as other Cabinet ministers and political acolytes.

Hain has provided evidence of transactions by the Gupta family through UK and EU-based banks and that have been flagged as possibly corrupt. He also highlighted the role of disgraced British-based PR firm, Bell Pottinger, in manufacturing fake news and shaping a friendly public narrative for the Guptas and Duduzane Zuma and in so doing fanning already tinder-dry racial tension in South Africa.

In an interview with BizNews last month Hain explained that he was “deeply pained” at the current crossroads in South African politics.

“It’s extremely painful and it’s a view shared by my mother (my father died a year ago). It’s shared by all the anti-apartheid activists who fought so hard in London – it’s a view and a pain shared by ANC veterans who I’ve personally met and who’ve spoken out,” he said.

Photo: Left with Albie Sachs as chair of the UK OR Tambo centenary committee.

The role of companies like KPMG, McKinsey and other “global or foreign companies that are actually supping and feeding at the trough of corruption and cronyism” had to be exposed. Hain said he also hoped that some of the money stolen and laundered would be returned to South Africa.

“I feel strongly that the money laundering billions that I want to see returned should be used in building new houses, building new schools, getting electricity and running water to the millions who don’t have it,” said Hain. DM