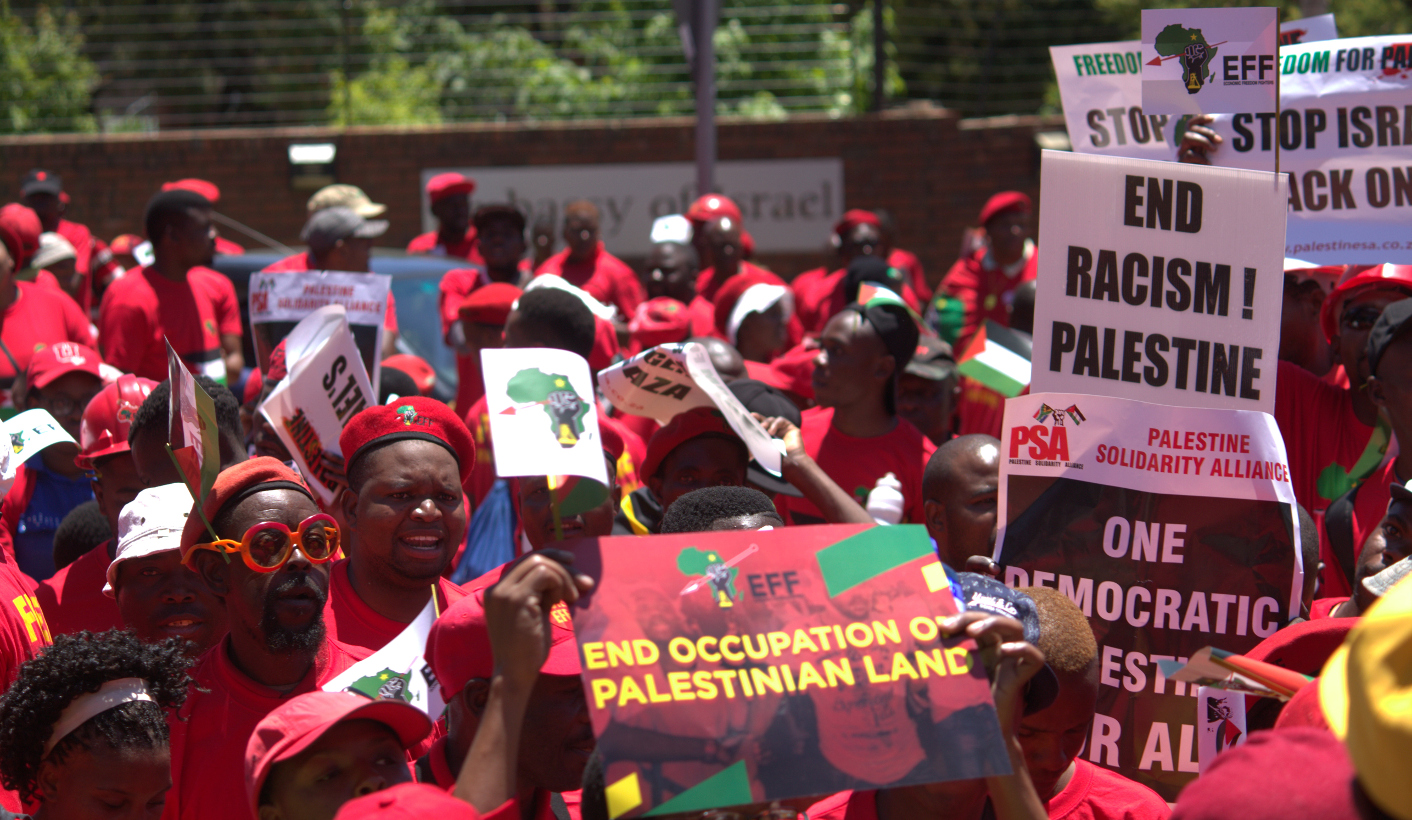 Julius Malema talks unity for Israel and Palestine but stokes the embers of division at home. By ORATENG LEPODISE.

Julius Malema, leader of the Economic Freedom Fighters, has urged Israel to “end its apartheid against the Palestinians” so that they too can live in a democratic place – just like South Africa.

Speaking during a march to the Israeli Embassy in Pretoria on Thursday, Malema said: “We want the Jewish and Palestinian community to live as one like we are doing in South Africa. If South Africans can do it you can also do it.

“Our struggle is not a localised struggle, our issues are beyond Tshwane, they are international… Democracy does not matter whether you are Jew or Palestinian, we are living in a democratic country in South Africa,” said Malema.

But even while Malema talked unity between the Israelites and Palestinians, he lambasted white Afrikaners about the #BlackMonday protests and the police for their reaction to the protests, saying the cops had “an opportunity for them to test the skin of the white people with a rubber bullet. They missed an opportunity.”

He said white Afrikaners could not be allowed to do as they wished, suggesting that if another march was planned, the EFF would meet them “toe-to-toe” so that they could be taught who owns South Africa.

Malema went on to call the police “white slaves”.

“What was even worse is that police are so scared of white people. Instead of shooting at them with rubber bullets, they were taking the phones of white people and shooting them pictures while they were disrupting the city of Tshwane.

“We must not be pushed by Afrikaners because they take advantage of our tolerance… they think our kindness is stupidity,” Malema said.

He said the police would be forced to choose a side if another #BlackMonday protest was held.

During Thursday’s demonstration which marked 100 years since the Balfour Declaration – a public statement issued by the British government during World War I which announced support for the establishment of a “national home for the Jewish people” in Palestine – the EFF demanded:

“I am here today because I am concerned about the situation in Palestine. I sympathise with them and I stand in solidarity with them,” said Cassim Masola, an EFF member.

The EFF also urged the business community to stop any dealings with Israelis.

“If we boycott everything Israel then they will feel the pain. They will see the need to go into genuine negotiations with Palestinian authorities so that they resolve to come up with a one-state solution, not a two-state solution,” said Malema.

Malema urged his supporters not to be narrow minded about certain issues. “We should not have a frog view but a giraffe view,” said the EFF leader. DM