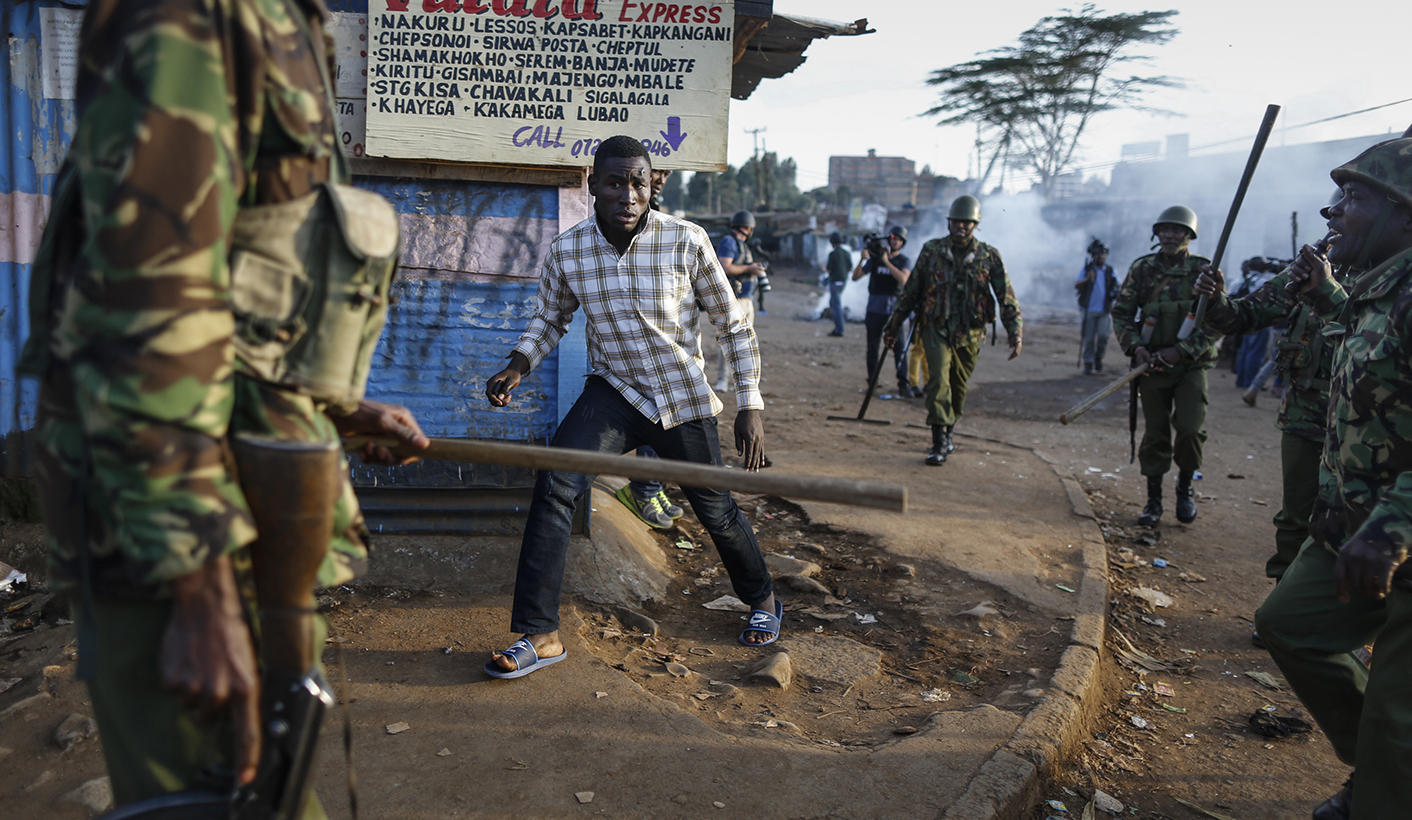 In its worst political crisis in over a decade, is a divided Kenya the answer? By Simon Allison, for ISS TODAY.

Kenya is experiencing its worst political crisis in more than a decade, prompting some politicians to suggest extreme solutions – including the division of Kenya into two countries.

A first presidential election on 8 August was annulled by the Supreme Court because of gross irregularities. The second, held on 26 October, was boycotted by the opposition and marred by more questions surrounding its credibility. Both votes took place against a backdrop of increasing political violence, including dozens of deaths.

Although President Uhuru Kenyatta has been declared the winner of the controversial second vote, with a majority of more than 98% thanks to the opposition’s no-show, the crisis is by no means over. Opposition leader Raila Odinga has refused to accept the result, describing the election as “shambolic”.

“This election must not stand … It will make a complete mockery of elections and might well be the end of the ballot as a means of instituting government in Kenya. It will completely destroy public confidence in the vote,” said Odinga in a speech in Nairobi on Tuesday.

In the speech, Odinga went one step further, repeating a pre-election pledge to establish a “national resistance movement” to “restore democracy”. Odinga did not elaborate on what this resistance movement would look like, what its specific aims would be, or how it would achieve them.

As leader of the opposition alliance, Odinga is careful with his words. But in Kisumu, a major opposition stronghold in the west of the country, local leaders were less circumspect. In the wake of the controversial rerun, which was marred in the region by police brutality, Kisumu Governor Anyang’ Nyong’o – a member of Odinga’s party, and a key ally – told journalists that secession was an option.

“People have a right to refuse to co-operate with a government that has gone against their sovereignty, according to article 1 and 2 of our constitution. We have a right to resist a repressive regime, like Uhuru and [Deputy President William] Ruto’s regime; that is our right as citizens, we cannot deny that right. And when we resist and refuse to cooperate, they should not kill us, they should come and reason with us. If they cannot reason with us, let us divide this country in two,” he said.

He said he was prepared to “establish the Federal People’s Democratic Republic of Kenya”.

‘Let (those who voted for Kenyatta) remain with the Republic of Kenya. You cannot remain in a republic where your only fate is to be killed when you are expressing a political right.”

It is a sign of the severity of Kenya’s political crisis that Nyong’o’s talk of secession is not an outlier. Ahead of the presidential election rerun, the idea gained currency among opposition supporters. A strong advocate was David Ndii, a strategist for the opposition National Super Alliance, who wrote in an op-ed last year: “When people find that they cannot live together they part company. Kenya is for the most part an abusive relationship. It is about time we start talking about ending it. This ought not be a difficult conversation.”

Eventually Odinga was forced to address the issue head-on. “We believe in a united Kenya. We do not support secession, but you have seen the disintegration of countries in eastern Europe. This debate about self-determination is gaining currency as a result of mis-governance … When people become desperate they resort to desperate measures,” he told Financial Times.

Supporters of secession in Kenya would not be alone: they would fit into a global trend that is threatening the sovereignty of established nation states. From the calls for Catalan independence in Spain to the referendum on Kurdish independence in Iraq and the growing support for self-determination in the Anglophone regions of Cameroon, self-determination movements are growing in stature.

But the example of the Catalans and the Kurds – both facing strong resistance from their respective national governments – highlights just how difficult it is to secede, no matter how much support an independence movement enjoys. Kenya would be no different.

For one thing, there is little consensus on what a divided Kenya would look like: would it constitute all opposition-held territory, or just regions of western Kenya, or could it even entail the division of Kenya into four or five separate countries? For another, any plans for secession would face enormous legal and political obstacles.

“For practical reasons, I think the prospects of secession are slim though the constitution provides for it. Parliament is dominated by Jubilee (the ruling party) and it would be an uphill task to get MPs to approve a referendum by 20 counties or so seeking to secede,” said Deo Gumba, an analyst with the Institute for Security Studies. “The opposition, if it’s serious, may need to go through a number of legal motions to convince the country that all options have been exhaustively explored.”

It is also far from clear that independence for regions would deliver the kind of positive change promised by politicians. The most recent example in Africa of a successful secessionist movement is South Sudan, whose post-independence honeymoon was crushed by a brutal civil war that continues to this day. Its citizens are arguably worse off than they were as part of a united Sudan.

For now, the talk of secession in Kenya remains just that – talk. The practical difficulties of making it happen present insurmountable obstacles, and there is not yet consensus among opposition leaders that it is the right way forward, as evidenced by Odinga’s rejection of the idea.

But regardless of the practicalities, the promise of independence for various marginalised regions is a potent rallying cry. As political tensions continue to rise in the wake of the controversial presidential election rerun, it is a subject that is likely to remain in the headlines, even if a legally divided Kenya remains a distant prospect. DM