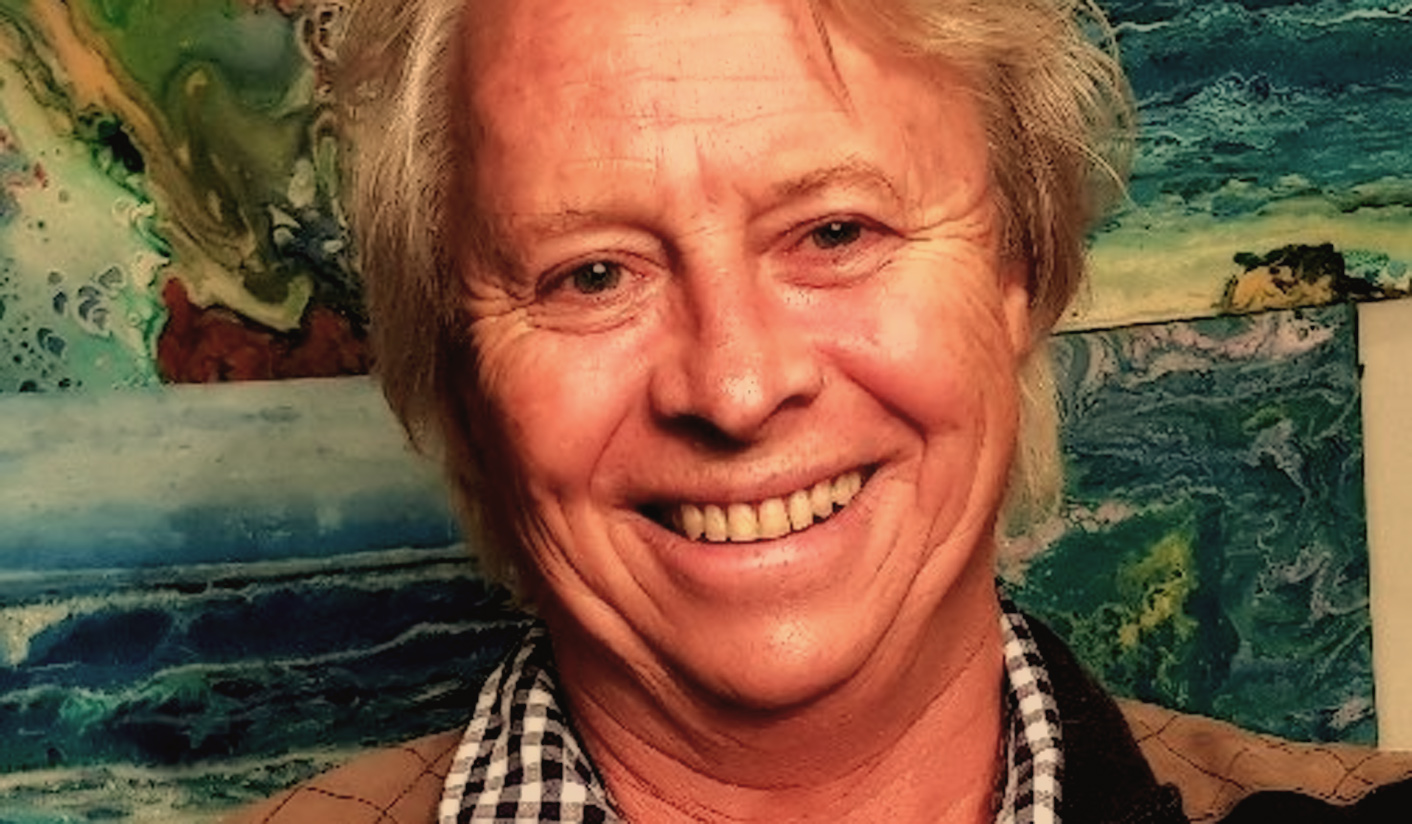 On 31 March Finance Minister Pravin Gordhan, while addressing the media outside of the Treasury offices in Pretoria after he and his deputy Mcebisi Jonas had been fired via SMS the night before, called on South Africans to mobilise and organise against corruption and State Capture. In Cape Town, seasoned equities trader and hedge fund manager James Gubb heeded the call. As a form of protest, Gubb began trading Gupta-owned Oakbay shares in order to create, in the price chart, a work of art depicting a middle finger. By MARIANNE THAMM.

Three days after James Gubb created what must rank as the first piece of protest art on a financial media platform in the world – trading between two accounts, illiquid Oakbay Resources and Energy shares in order to create the image of an “up yours” middle finger in the price chart – some market analysts speculated that the surge might have been due to a “renewed optimism about the nuclear programme”.

IOL’s Business Report – owned by Iqbal Surve – speculated that Oakbay’s “fortunes” were linked to a rising demand for uranium and that this might have caused a spike in the share price. Another analyst suggested the surge could have been related to “changes at National Treasury”.

But Gubb, who held the position of head of trading for Allan Gray for five years and who describes himself as a macro-analyst, knew exactly what was going on. He was engineering it all from Cape Town, all in the name of protest art, and chuckling with glee.

Gubb managed to get as far as completing much of the “drawing” of the middle finger on the share chart before the JSE shut him down.

“The JSE stopped me as I was dropping the right hand side of the finger,” the impish Gubb told Daily Maverick.

This week Gubb was fined R100,000 by the FSB for contravening section 80 of the Financial Markets Act.

“JSE records reflect that on 31 March 2017 a trading account held at Nedgroup Private Wealth Stockbrokers (Pty) Limited entered order through an online trading platform to buy Oakbay shares in lots of one share at progressively higher prices. At the time a trading account held at Peregrine Equities (Pty) Limited entered orders through an online trading platform to sell Oakbay shares at identical prices to the buy order referred to above,” the FSB Directorate of Market Abuse wrote in its summons to Gubb.

That description is technically what Gubb did in order to “draw” the up-yours finger. This was the method to his protest art. But what was the intention?

Gubb recalls exactly the moment when he decided to embark on this novel form of protest. All around him South Africans had gathered in the streets in protest but he was hoping to do something a little more personal and in-your-face – and aimed specifically at the Gupta family.

“It was on the day of the protests, 31 March, when Pravin Gordhan [who had just been sacked] said that by all means necessary, do whatever you can to stand fast in the face of brazen corruption. And I said ‘oh yeah’. And then I struck on the idea of creating, in the great tradition of protest art in South Africa, this piece of art, the middle finger, by manipulating Oakbay shares. It is quite transcendental what I tried to do.”

But unlike some graffiti artists who tag walls and poles under the cloak of darkness to leave their mark, Gubb logged in as himself.

“I didn’t try to hide it. Because Oakbay is deeply illiquid I was able to trade between myself without the interference of any other person wanting to trade Oakbay.”

In his statement to the FSB Gubb explained that he did not intend, during the creation of the work of art, to make any profit from the deal and that no one would be harmed by it.

“The monetary amounts would be trivial, and that upon completion of the trading programme, the whole exercise would be mathematically elegant, in that the price of the security would return to the previous closing price. All that would remain is the intra-day price history, generally viewed in graphical format,” explained Gubb.

He added that “throughout recorded history, new media has always presented opportunities for alternative artistic endeavours, some that unexpectedly blossom from seemingly ridiculous and subversive roots”.

Gubb even outlined for the FSB in his statement the potential future use of the concept in that “illiquid securities will attract attention, even by the listed company itself, of such artistic endeavours. Think of the outline of a castle for SAB InBev, or a tick for Nike”.

But Oakbay, says Gubb, should never have been listed in the first place.

When Oakbay Resources and Energy listed with the JSE in November 2014 it converted an Industrial Development Corporation loan of around R256-million into a 3.57% equity.

“The JSE should be ashamed that they ever allowed it to be listed in the first place. The listing facilitated a massive transfer of wealth from the PIC to the Guptas. Where is the JSE regarding this massive fraud? Absolutely nowhere is my guess. But they happily fined me R100,000 for a trade worth no more than R400.”

Gubb added that he felt vindicated now that Oakbay had been delisted.

“I’m hoping that what I have done emboldens the man on the street to protest in any way he or she can. We are literally at war with our current president and his cronies.”

And as for the work of art?

“People are already making an offer on it. I think I will stick it in a gold frame. I took one for the team by paying the R100,000 and I have a feeling it will turn out to be the best money I have ever spent. I encourage every person to do something for one’s country. I don’t care what it is, it might be writing a letter, contributing to amaBhungane or Scorpio, or whistle-blowing or helping in a fundraiser. I don’t care. Just do something.” DM