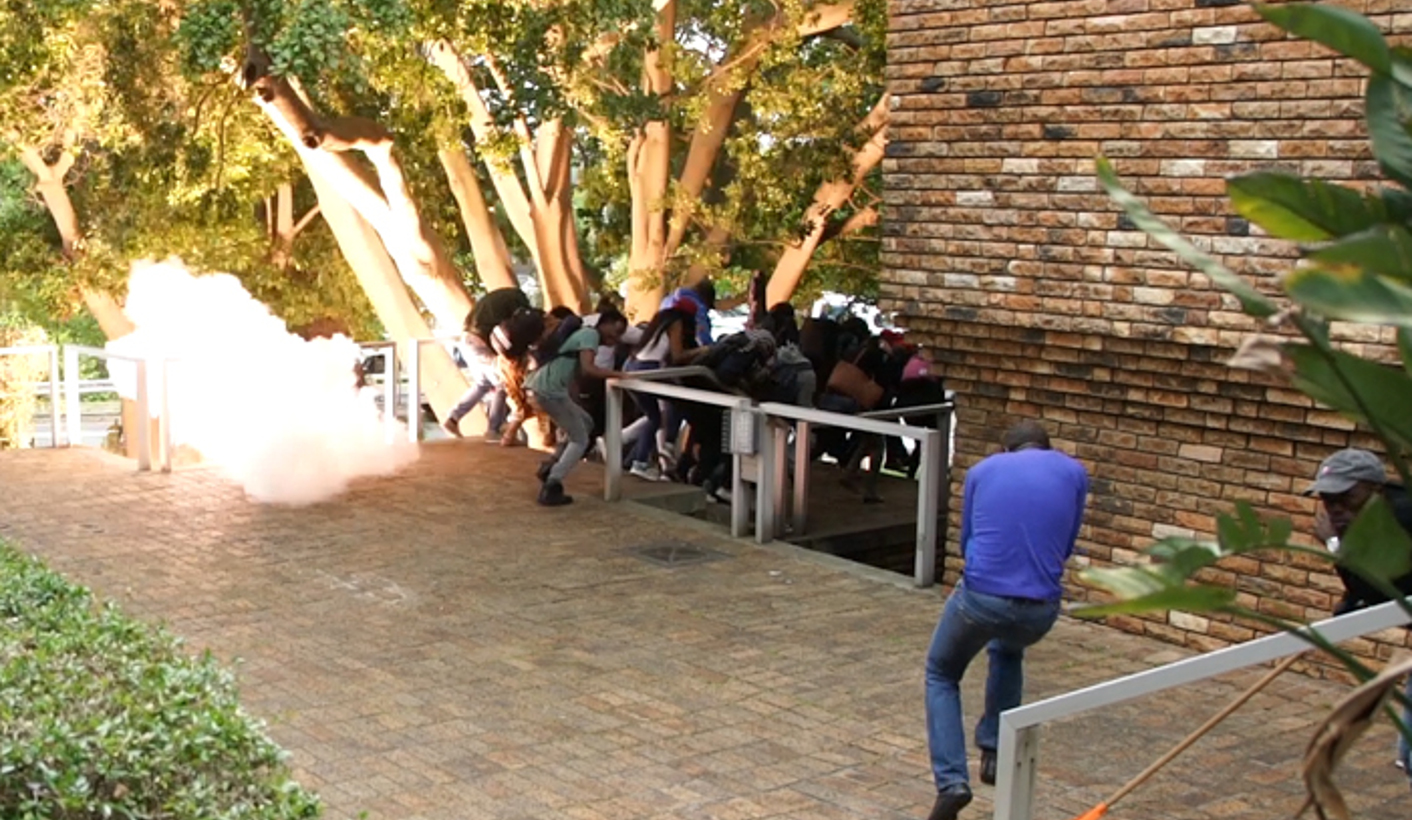 A large amount of faeces was dumped in the computer science building on the University of Cape Town campus and students were arrested. By GROUNDUP reporters, with photos and video by SHAUN SWINGLER.

More than a hundred protesters moved between the University of Cape Town’s campuses on Thursday, disrupting lectures and attempting to shut down the institution.

On Thursday morning computer science staff arrived to find shit strewn across the foyer of their building. The building had to be sealed off and cleaned.

When GroundUp arrived at the building, it had already been cleaned. The smell of disinfectant and other odours was potent. A student said: “It’s horrendous how the workers, who the protesters yell about not being paid enough, have to literally clean up their shit.”

Protester Simone Cornelius, a member of the Leadership Forum on UCT #FeesMustFall 2017, said: “Management must state their position on free education.” Cornelius said the protesters want a 0% fee increase, as well as other demands to be met.

“Management must account for their lack of interest in the struggling black students of UCT,” she said. Cornelius said that they will continue to disrupt until their demands are addressed.

But a member of UCT Council told GroundUp: “In principle, fees is not an issue at UCT. No poor student is financially excluded. The missing middle can request assistance. All poor students are funded through NSFAS. If UCT has no increase it simply means that NSFAS pays UCT less. If students fall through the cracks because of bureaucratic bungling, the SRC, which instigated the protests, is supposed to help them. These protests are definitely not about fees.”

Speaking at a press conference on Thursday afternoon, Vice-Chancellor Max Price said: “One goal [of the protesters] is that we should have a 0% increase in fees, but the university will face inflationary costs next year and the government has not agreed or given any indication that they will increase our budget to compensate for fees, so this is not something we can do.”

“Uneasy”, “uncertain”, “anxious” and “stressed”, responded two first-year students sitting together outside a closed building where their maths lecture was supposed to have taken place. “Exams are coming and the content isn’t finished,” said one.

The College of Music school was disrupted. Police locked some protesters inside. Someone outside kicked the door and cracked the glass. In response, the police used stun grenades to disperse the students.

A music student said the shutdown affected a lot of people at college because they have a lot of work to catch up on. “It’s a schlep, really,” he said.

Photo: Protesting students are told by police to vacate a road they had occupied on Upper Campus. Photo: Shaun Swingler.

The South African Police Service (SAPS) told GroundUp that students were blocking Matopo Road in Mowbray at 06:00, where the UCT buses are parked. SAPS said that students were damaging bus wheels with knives. A 21-year-old man was arrested.

SAPS also said that at about 08:00 the students blocked Baxter Street. SAPS gave several warnings for them to disperse, “to no avail”. A 21-year-old man and a 23-year-old woman were arrested. The woman “was taken to a nearby hospital before being charged”. The man is expected to be charged with public violence, contravening a court order, public indecency and resisting arrest. The woman is expected to be charged with public indecency.

UCT released a statement on Thursday saying: “Campus remains open today and all test venues will be protected. Tests and exams will proceed as scheduled. However, the situation is volatile and acts of vandalism and other illegal activities have temporarily disrupted the Jammie Shuttle service, access to campus and activities in three buildings.”

It further said: “The unlawful action by protesters is wholly unacceptable and is creating a situation that is traumatic for many, poses serious safety risks and is directly impacting the rights of students and staff to study and work. This is condemned by the executive in the strongest terms.”

The main library and law library have been closed.

9-13 October: A new SRC is elected. Nine of the 15 elected candidates are members of the Democratic Alliance Students Organisation, including the five highest votes polled. Much of what ensues over the following days appears to be a contest between the outgoing and incoming SRCs.

24 October: The outgoing SRC calls a mass meeting in Memorial Hall. Speakers demand no fee increase. UCT has not yet set a fee increase for 2018, and is awaiting the release of the report of the Fees Commission.

29 October: A source informs GroundUp that at a meeting on Sunday evening, two respected UCT academics became irate with Max Price and threatened to resign if an interdict wasn’t obtained.

31 October: A source informs GroundUp that at a meeting to elect commissioners for the upcoming Institutional Reconciliation and Transformation Commission, no elections take place. Instead the discussion was about the use of private security on campus. This is also the last day of office for the outgoing SRC.

A heated public meeting takes place on campus to discuss fees. The meeting was called by Max Price in response to demands by the protesters, who then berated him. The person who got the most votes in the newly elected SRC chair, Democratic Alliance Students Organisation’s Karabo Khakhau, is jeered by the crowd. Dr Lwazi Lushaba, from the Department of Political Studies, makes a racially charged speech.

2 November: The university is trashed and human excrement dumped on campus. Some protesters are arrested. DM

Note: In a report yesterday, it was stated that UCT had announced an 8% increase in tuition fees and a 10 % increase in residence fees. This is in fact a proposal and not final yet and subject to approval by Council in December.

Photo: A stun grenade is thrown by SAPS to disperse students who had attempted to shut down the UCT College of Music. Photo: Shaun Swingler