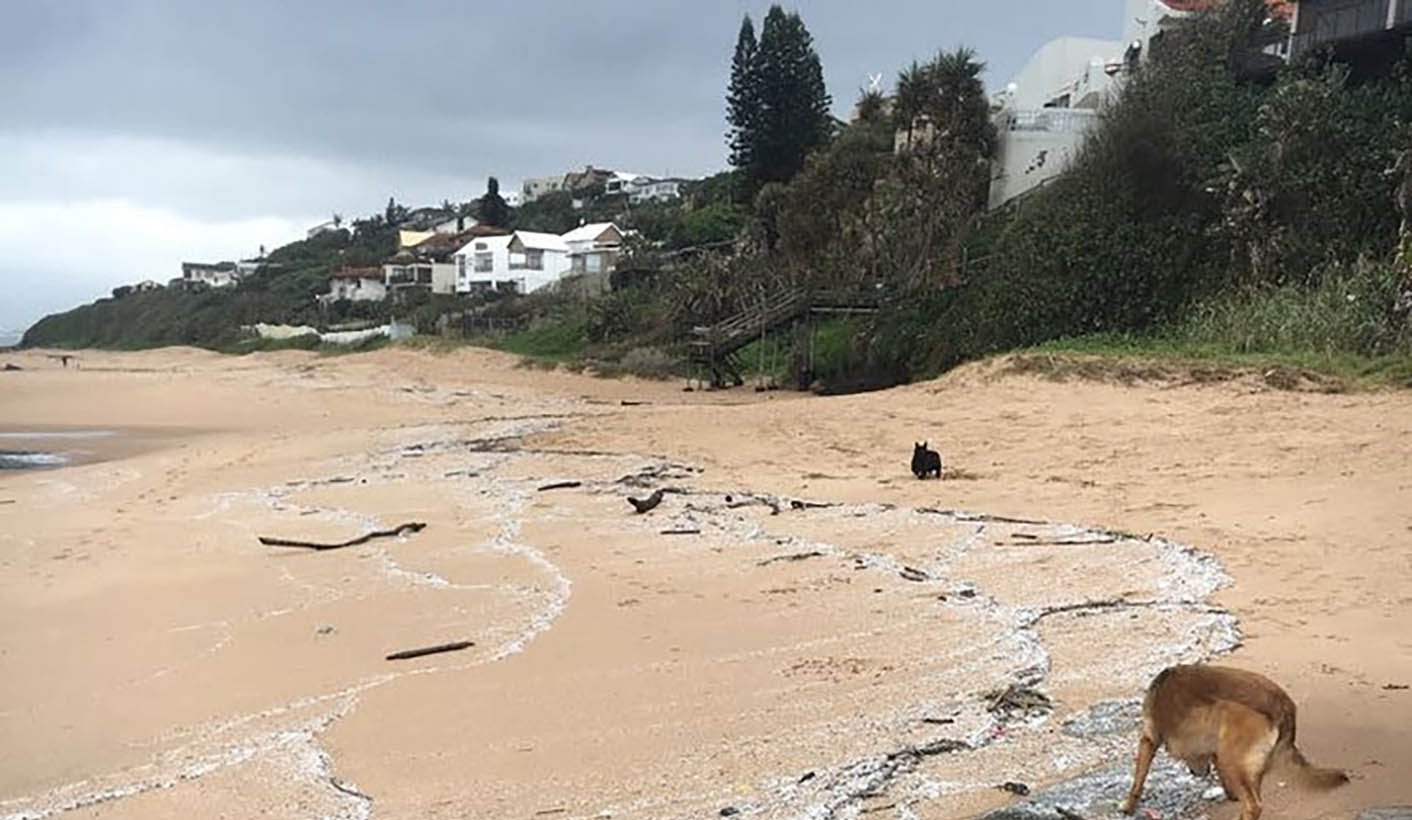 One of the world’s biggest petrochemical companies, Saudi Basic Industries Corporation (Sabic), will foot the bill for clean-up operations following a massive spillage of raw plastic pellets in KwaZulu-Natal waters. So says Plastics SA’s sustainability director, Douw Steyn, who has been engaging with Sabic representatives in the wake of the recent Durban harbour cargo spill.

The spill happened after two container ships collided in the harbour mouth during a severe storm that wreaked havoc on the KwaZulu-Natal coast on 10 October. At least one severely ruptured container of plastic pellets (nurdles) fell overboard and was allegedly left submerged in the harbour for almost 24 hours.

Within a day, millions of little moon-shaped nurdles (which serve as raw material in the manufacture of plastic products) started washing up on Durban’s beaches. There is a possibility that nurdles have contaminated the coast as far north as Richards Bay and have also entered the south-flowing Agulhas current.

While authorities from Transnet National Ports Authority through to the Department of Environmental Affairs (DEA) are under fire for being slow in publicly acknowledging the extent of the disaster, Plastics SA has likened the possible ecological impact to an oil spill.

But it will be difficult to determine the extent of the pollution until there is a full inquiry, said Steyn.

uShaka SeaWorld’s education director, Jone Porter, said that while the nurdles themselves were not harmful, the bad news was that they never disintegrate but absorb pollutants such as PCBs and organochlorine pesticides which are extremely harmful to both marine life and humans if consumed.

Several environmental groups have been highly critical of government authorities’ response to the pollution event so far.

“It’s a case of too little being done, too late. The extent of the spill could have been significantly reduced had authorities acted sooner,” said Steve Cohen, founder of the Durban Partnership Against Plastic Pollution.

“There are now all these plastic pellets floating into currents along our coastline” said Cohen. “Once they enter the Agulhas current, the pellets are likely to flow as far south as Port Elizabeth and beyond.”

Photo: Nurdles are appearing along the coast both north and south of Durban.

In an illustrated Facebook posting documenting the aftermath of the harbour collision, Cameron Johnston of Salt Fishing South Africa asked why authorities did not arrange a full-scale clean-up while the pollution was still contained in the harbour.

Johnston said one six-metre container, leaking 25 kg bags of plastic pellets, remained submerged in the harbour for more than 24 hours after the storm. Once recovered, the container allegedly sat uncovered on a Transnet jetty, allowing for further leakage of nurdles into the port.

The DEA and Transnet have not yet responded to queries, nor issued any public statement on the pollution event.

Plastics SA said it would ultimately be the responsibility of Sabic, as the owner the spilled cargo, to cover the costs of the clean-up.

Cohen agreed. He said a precedent that the “polluter must pay” also existed within the maritime industry.

In 2012, a petroleum company, Sinopec, set aside 10-million Hong Kong dollars ($1,2-million at the time) to clean-up 150-tonnes of nurdles that washed onto Hong Kong beaches after six containers washed off a ship during a typhoon.

Late yesterday afternoon, Plastics SA notified various environmental groups that the DEA had received a “response plan” from Sabic and that Drizit Environmental, a pollution clean-up company, had been appointed to recover beached nurdles.

“Plastics SA have supported Sabic in an advisory capacity This was an unfortunate accident during a freak storm. The only choice now is to get it cleaned up as soon as possible. Sabic is doing that,” said Steyn.

GroundUp is awaiting comment from Sabic, which will be included in a follow-up article. DM

This Ocean Watch story was produced for GroundUp by www.rovingreporters.co.za in association with the Human Elephant Foundation

Photo: The Department of Environmental Affairs has begun probing the recent KZN cargo spill that resulted in extensive plastic pellet pollution on the KZN coast. Photos supplied by Durban Partnership Against Plastic Pollution.