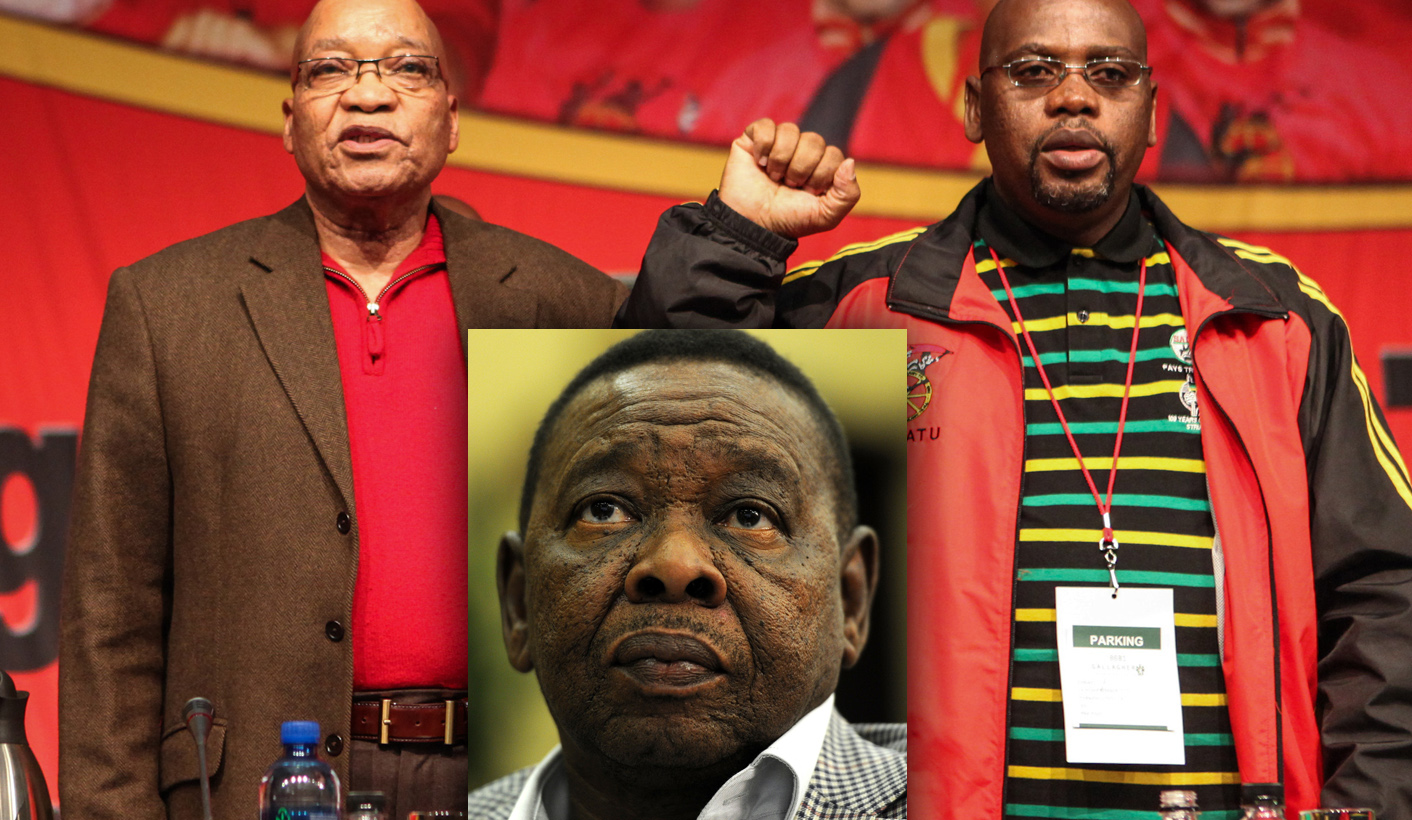 The ANC finally sat down with its alliance partners on Thursday, months after the scheduled meeting, as relations between the governing party, the SACP and Cosatu are at an all-time low. Little that could bridge the rift appeared to come out of the meeting and the ANC’s December conference is set to determine the future of the alliance. By GREG NICOLSON.

The meeting actually went ahead. That’s one positive the fractured alliance can take out of Thursday’s gathering. The alliance political council brings together top leaders of the ANC, SACP, Cosatu and Sanco to discuss the state of their union and the implementation of their goals. It’s been postponed since June after the SACP and Cosatu called for President Jacob Zuma to resign, both also pushing for a stronger voice within the grouping.

On Thursday, media were brought up to the 11th floor of Luthuli House where President Jacob Zuma and Deputy President Cyril Ramaphosa headed the conference table and were flanked by SACP Chairperson Senzeni Zokwana and Cosatu President Sdumo Dlamini. They smiled and laughed for the cameras.

The meeting comes after Zuma removed SACP General Secretary Blade Nzimande from Cabinet last week, which the communists called a “desperate” and “reckless” move to promote the nuclear deal. SACP First Deputy General Secretary Solly Mapaila called it “a clear declaration of war on the SACP”. The battle has been raging throughout much of Zuma’s second term as leader of the ANC and was amplified by his lack of consultation in the March and October reshuffles, as well as repeated revelations on the extent of corruption related to his friends, the Gupta family.

ANC Deputy General Secretary Jessie Duarte spoke to journalists briefly after the ANC had made the first presentation of the meeting. “The meeting is running extremely well and there is a good mood in the meeting. There’s a mood of listening and raising issues very honestly,” she said outside Luthuli House. There’s widespread criticism that says the alliance is effectively dead and no longer serves the aims of the national democratic revolution. Duarte was optimistic: “This is not a meeting to dismantle the alliance. It’s a meeting to look at how we deal with the problems we have and to strengthen the alliance.”

A statement released by the ANC, SACP, Cosatu and Sanco on Friday was vague. “The alliance partners are in agreement that alliance relations are currently at their lowest levels and committed to a series of measures to address this situation,” it said. That’s a significant admission, considering the troubles the alliance faced under former President Thabo Mbeki’s leadership ahead of the ANC’s Polokwane conference.

“This commitment is underpinned by a fundamental understanding that the alliance remains best placed to unite the broadest cross-section of society behind the objectives of building a united, non-racial, non-sexist, democratic and prosperous South Africa,” it continued. No mention was made of the SACP’s plan to contest elections independently. Zuma was not mentioned by name.

The partners confirmed their commitment to establish a judicial commission of inquiry into state capture, but did not mention the terms of such a commission or the fact that Zuma has been trying to stall the process. On the President’s prerogative to appoint Cabinet members without consultation, the statement was also ambiguous: “The meeting discussed the prerogative of the President, premiers and mayors to appoint and release members of cabinet, executive councils and mayoral committees. Alliance partners highlighted the importance of appropriate consultation and reconfirmed the necessity for the alliance to make meaningful input into strategic decisions.” That must have been a fun conversation for Nzimande.

The most significant development was that the leaders could sit around the same table and hope to do so again one day. They agreed to an urgent follow-up meeting in November, preceded by a series of engagements on specific issues. At the November meeting, a paper on re-configuring the alliance will be presented to address the SACP and Cosatu’s ongoing concerns that the ANC treats them like junior partners.

But it’s unlikely that the alliance, much like the ANC itself, will be able to agree on anything significant this year. Here’s an economic gem from the statement that highlights the contradictions running through current discussions: “There was consensus that workers’ assets in the Government Employees Pension Fund and Public Investment Corporation must be treated with meticulous care and that these instruments must be used to further developmental objectives.”

The alliance partners finished by acknowledging the “utmost importance” of the ANC’s December elective conference. In reality, that’s where the future of the alliance will be determined. How the chips fall will either save or destroy the alliance as we know it. DM