Medium-Term Budget: Zuma, Gigaba lack of action on tertiary fees could cause ‘pandemonium’ 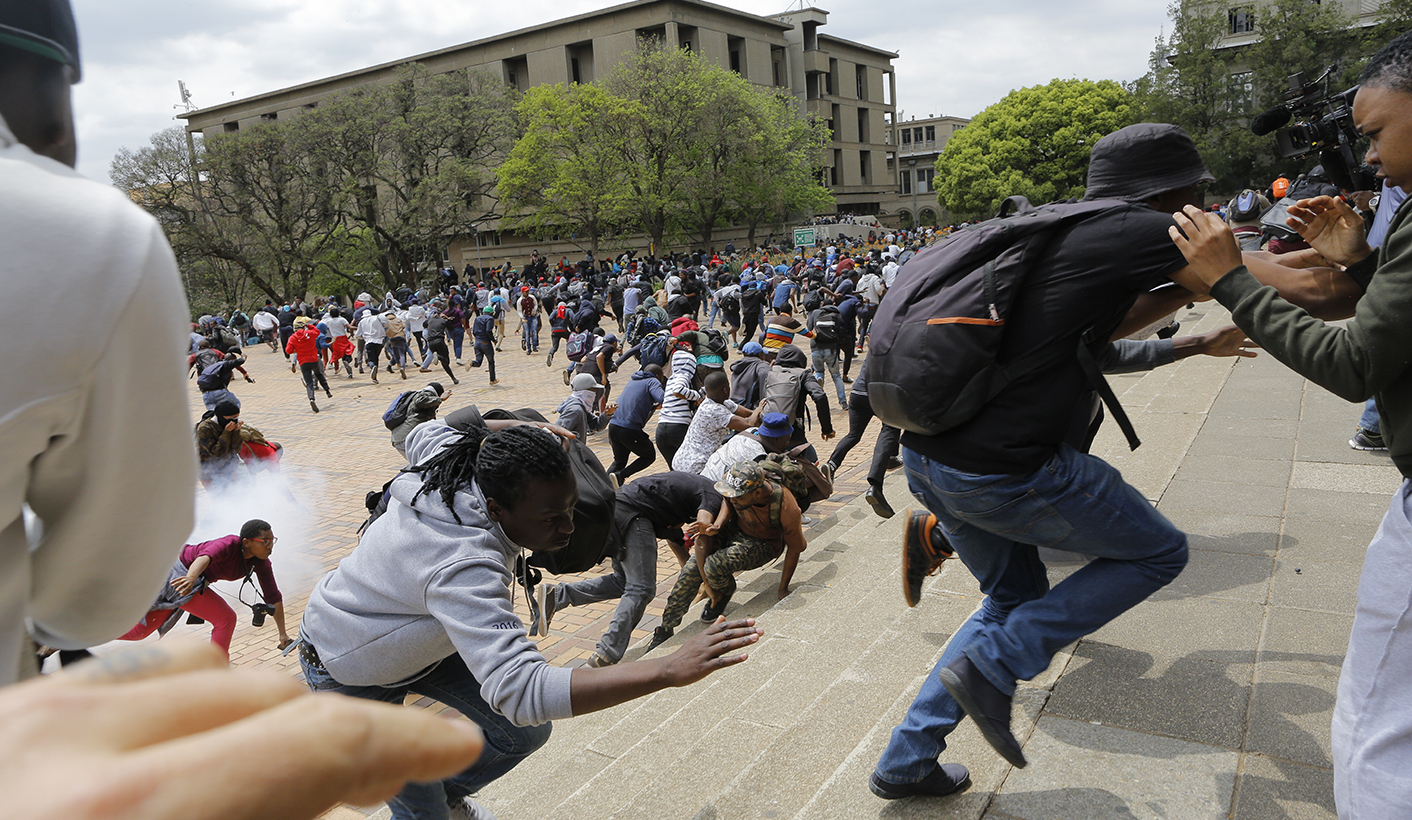 As a fresh round of student protests sweep tertiary institutions, stakeholders called on Finance Minister Malusi Gigaba’s Medium-Term Budget Policy Statement (MTBPS) to provide guidance on the issue of student and university funding. Instead, as President Zuma keeps the Heher Commission report under wraps, Gigaba kicked the issue to the 2018 Budget. By GREG NICOLSON.

Delivering his first budget statement on Wednesday, as Cape Town students marched to Parliament, Gigaba said higher education had been put at the centre of the country’s transformation agenda and was the highest growing aspect of expenditure. He failed however to provide guidance as he did not announce any measures on the demand for fee-free tertiary education.

“The student movement has correctly put the issue of higher education at the centre of our transformation agenda,” said the minister. “We cannot hope to grow and develop without the skills and intellectual capabilities that our universities and technical training colleges produce. The budget already makes an enormous contribution.” Spending in the sector will rise from R77-billion this year to R97-billion in 2020/21, including financial assistance to 450,000 students, he said.

It appeared that the minister has not seen the report of the Heher Commission into the feasibility of fee-free higher education, which was given to the President in August, and Gigaba said further announcements on fees would be made in the February Budget.

“But clearly more needs to be done. The Heher Commission of Inquiry into higher education and training has delivered its final report to the President and we await the President’s determination and announcement in this regard. Although the fiscal constraints we face are real and binding, we must make every effort to ensure that no academically deserving student is excluded due to financial constraints. Further announcements will be made in this regard in the 2018 Budget.”

In the ANC’s report from its July policy conference, among the resolutions to be considered at the December conference is a commitment to support middle- and working-class students to access “fully subsidised free higher education and training by 2018”. Gigaba offered no path towards achieving that aim.

“Additional spending commitments may emerge from policy processes under way. Government is evaluating the implications of providing fee-free higher education and training to poor and middle-income students,” says the full MTBPS. And then: “The additional funding required for the post-school and education sector is difficult to determine without firm policy guidelines. However, initial costing of the options suggests that the funding requirement could range from R17.7-billion to R40.7-billion in 2018/19.” That might increase if the white paper on post-school education and training, aiming to significantly increase enrolments, is implemented.

SAUS president Avela Mjajubana said students were looking to Zuma and Gigaba to provide a path forward to resolve fees disputes, which have intermittently shut down campuses across the country since 2015, but had been disappointed. “It’s going to create pandemonium in the sector because universities are forging ahead with the fees adjustment.”

Mjajubana was meeting with student representatives on Wednesday who have led protests at the University of the Free State. Recently, there have also been protests at UCT and Cape Peninsula University of Technology. Most universities have held off announcing fee increases for 2018, but with the delay in releasing the Heher Commission report and lack of guidance from Gigaba’s medium-term budget, they will have to make pronouncements soon. “We are going to see more of this coming up,” said Mjajubana on student protests.

EFF Student Command spokesperson Mangaliso Sambo said on Wednesday that Gigaba’s speech was an insult to students, but there was little point in protesting. “I think it’s a mockery to the student populace,” he said, claiming the government has ignored high fee increases. “Yet the minister of finance still has no plan to assist crying students.” Sambo, however, said the government has not listened to past protests and to achieve free higher education the ANC must be voted out in 2019.

In his February Budget, former finance minister Pravin Gordhan gave higher education a R16.1-billion funding boost over three years, over half of the total re-prioritised expenditure. The funds came from contingency reserves and the National Skills Fund’s reserves. Higher education’s increase in expenditure, which after debt-service costs has seen the highest growth in the state’s budget, however, doesn’t amount to a long-term plan to meet student and public demands.

Universities South Africa CEO Professor Ahmed Bawa said this week: “No young South African should be prevented from taking up a place offered to him or her at one of our universities, for financial reasons. That is a fundamental assault on the purposes of higher education. Hence, we are all very anxiously awaiting the release of the outcomes of the commission.”

As Zuma sits on the Heher Commission’s findings, probably cautious to make any serious moves ahead of the ANC’s elective conference in December, the academic year is sure to be disrupted by protests. DM

File Photo: Students from Wits University run after a stun grenade exploded near them as ongoing protests continue against the cost of higher education at the University of the Witwatersrand, Johannesburg, 04 October 2016. Photo: Kim Ludbrook/(EPA)