Patent is a Virtue: Activists march for law reform 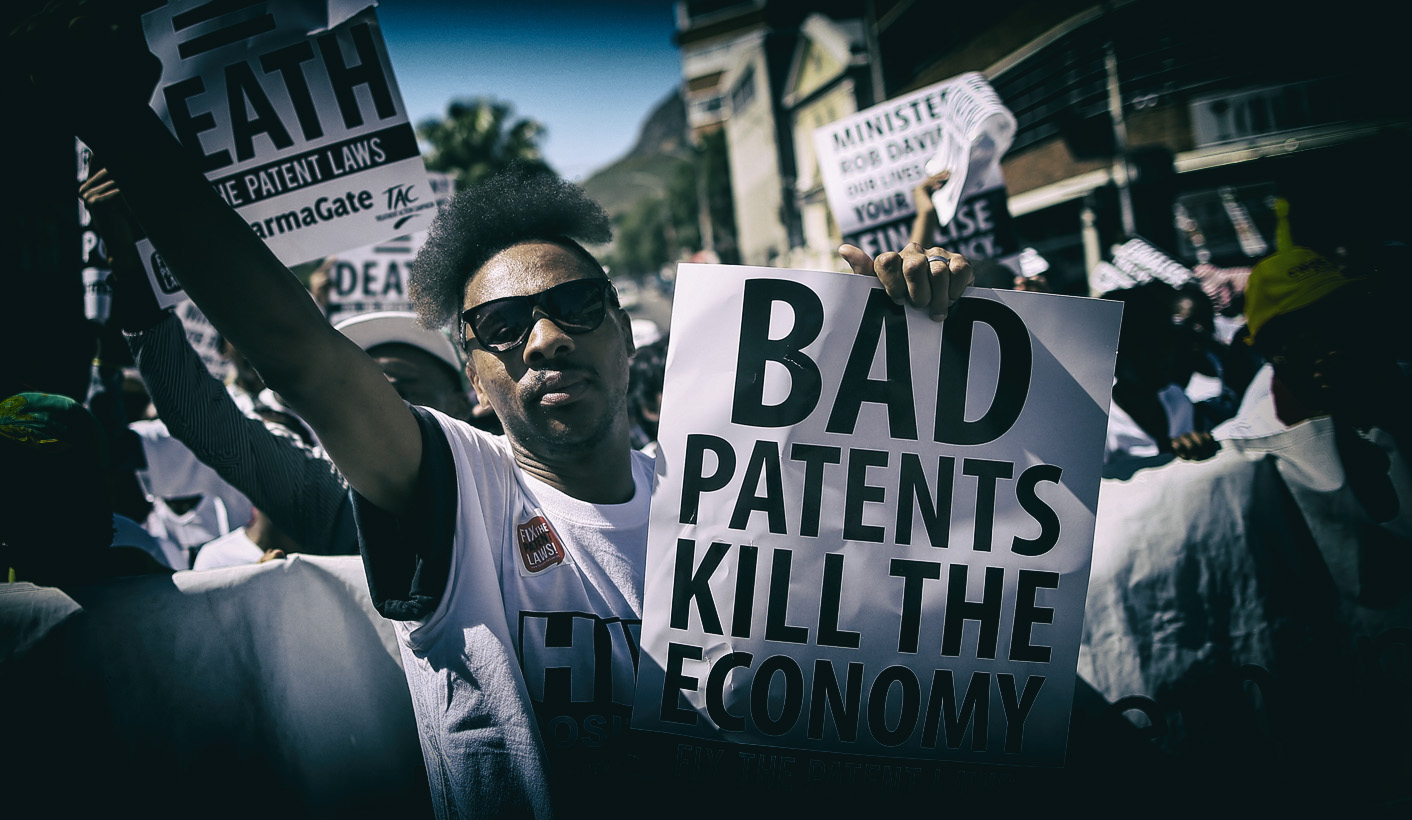 On Tuesday activists marched to the Department of Trade and Industry asking for urgent reform of South Africa’s patent laws. The DTI has released a new draft policy. But the marchers say it’s not fast enough for patients who depend on patented medication. By MARELISE VAN DER MERWE.

A total of 36 patient and civil society groups marched to the Department of Trade and Industry on Tuesday, saying current patent laws were placing patients at risk thanks to high prices and poor access.

The Fix the Patent Laws Coalition – which includes CANSA, Marie Stopes, SECTION27, SADAG, the Sunflower Fund and TAC, among 30 others – said in a statement it was in support of government efforts to fix patent laws and ensure everyone had access to the medicines they needed. However, they had several recommendations and wanted implementation to be prioritised.

A new draft policy on intellectual property (IP), which covers medical patents, was released by the DTI in August 2017.

In August, the draft policy was largely welcomed, including by the Fix the Patent Laws Coalition (FTPL). Tobias Schonwetter, director of the Intellectual Property Unit at the University of Cape Town, said it was “much improved”, “laudable” and a “step in the right direction”.

The Innovative Pharmaceutical Association of SA (Ipasa), which has large pharmaceutical companies such as Pfizer, Roche, and Merck among its members, also largely had a positive response, although it called for further clarification in parts.

On Tuesday, marchers were taking to the streets partly in memory of FTPL activist Tobeka Daki, who died a year ago. Daki was a mother of two fighting HER2+ breast cancer. She could not access the drug trastuzumab, manufactured by Roche, as it would have cost R500,000 a year. Roche holds multiple patents on trastuzumab in South Africa, which could guarantee it a monopoly on the medicine’s sales until 2033.

Veroney Judd-Stevens, a HER2-positive breast cancer patient, verbalised her frustration earlier in 2017 in trying to access trastuzumab: “It’s unaffordable, totally unaffordable. Where am I going to get R600,000? I might as well sell my house, get better and then have nowhere to live. That’s what it boils down to.”

Trastuzumab is not the only cancer drug that is setting patients back by a large amount: according to a recent report by the Cancer Alliance, 15 of the 24 cancer drugs examined are available in India at less than half the price they can be bought for in the private sector in South Africa.

An extreme example is lenalidomide, which would cost R882,000 in South Africa and less than R32,000 in India.

Daily Maverick has previously reported on the high cost of cancer drugs in South Africa. In June, the Competition Commission launched a probe into possible price fixing, while the rising incidence of cancer versus drug affordability remains a concern. But cancer is not the only disease leaving patients battling for access to medication. TB drugs have also come under the microscope, as well as crucial medications for sexual and reproductive health, mental health, epilepsy, and hepatitis.

“The FTPL submission to the DTI highlights areas of encouraging progress, while continuing to provide recommendations for improvement, to ensure that a pro-public health policy that advances human rights is finalised,” said Salome Meyer of SECTION27.

The draft policy, which comes 16 years after the signing of the Doha Declaration on Public Health, paves the way for a more progressive intellectual property regime in South Africa, said the activists. According to them, it is notable that for the first time, the policy would be clear in prioritising people’s constitutionally guaranteed right of access to healthcare services, in stating that the final policy must “first and foremost engender the ethos of the South African Constitution”.

Their memo, however, contained a number of recommendations to the DTI. These included the application of strict patentability criteria to avoid patenting that would undermine the growth of the local patenting industry; a policy environment that would promote local manufacturing; a range of reasonable measures to introduce a substantive patent examination system that takes into account public interest and public health; a range of recommendations around patent opposition procedures; greater transparency and substantive examination of patents; the inclusion of an educational-use exception, and allowing generic companies to manufacture, import and store generic medicines sufficient to allow for immediate marketing and sale upon patent expiry. A number of recommendations were also included on licensing and international co-operation, as well as a call for speedy implementation.

“This reform process has been ongoing since 2009. We are encouraged that a final policy and actual changes to the law finally seem to be imminent. We march today to support the steps taken by the DTI to protect public health, but also to remind the DTI that people’s lives depend on the rapid conclusion of this law reform process. Until the relevant Acts are amended, people will continue to suffer and die in South Africa because they can’t access affordable medicines,” said Claire Waterhouse, Access Campaign Advocacy Adviser for Doctors Without Borders Southern Africa.

Chairperson of the Treatment Action Campaign Sibongile Tshabalala added that the group was marching in solidarity with all people who are unable to access the medicines they need to improve their chances of survival or ease their suffering. “We have lost comrades and friends simply because they couldn’t access the medicines they needed due to high prices driven by unwarranted patent monopolies,” said Tshabalala.

But according to Dr Ernst Marais of managed care organisation the Independent Clinical Oncology Network (ICON), who Daily Maverick spoke to regarding access to front-line cancer treatments, the problem may be bigger than drug pricing. ICON is a network liaising between doctors, patients and funders to ensure patients have access to the most effective care and that funding is directed to where it’s most likely to work.

“Drug prices are but one of the many factors that play a role in the affordability of care,” he said. “In South Africa, 8.4-million people have medical insurance and have access to at least prescribed minimum benefits … Resources are fairly easily accessible and much work is done by ICON in this sector to ensure cost-effective, high quality care. Even so, access to newer molecules (targeted therapies and immunotherapy) and hi-tech radiotherapy remains limited due to cost. In the state sector, access remains a major concern. There are fewer resources available to the uninsured population than there are to the insured population.”

His colleague, Dr David Eedes, added: “For the majority of South Africans, the access to early diagnosis and then to appropriate affordable basic treatment is very poor. Affordability of expensive chemotherapy drugs for the average South African, for example, is not a burning issue. The average patient does not even have access to very affordable, basic treatment.” DM