Op-Ed: Durban’s ‘CCTV camera’ towers – all is not as it seems 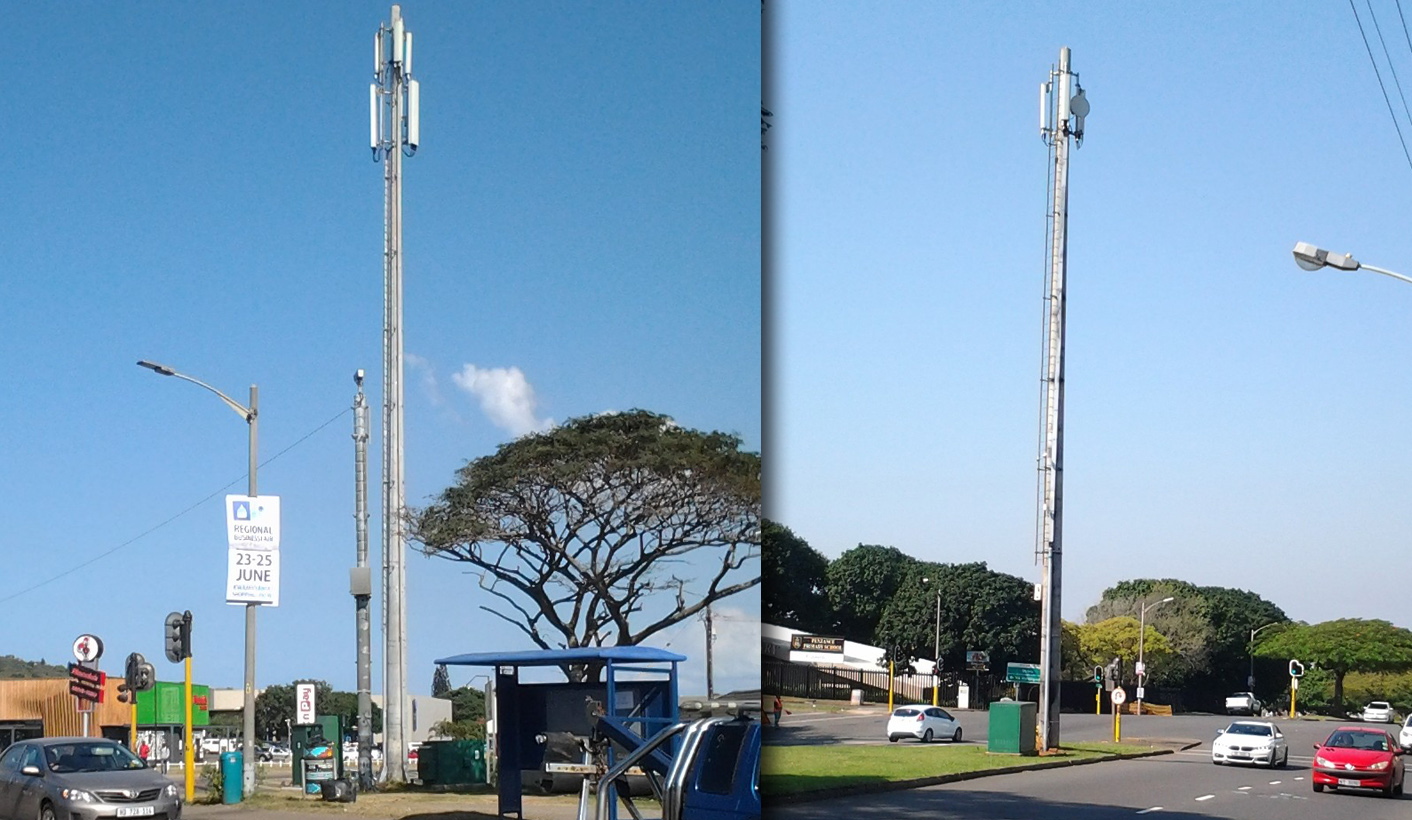 It has taken more than a year for Durbanites – who started asking questions in August 2016 about the huge concrete poles being built all over the city that bore an uncanny resemblance to cellphone towers – to realise that a huge scam was being perpetrated, quite literally on their doorsteps. By NIKI MOORE.

When concerned members of the public asked their local councillors what was going on, city spokesperson Thozi Mthethwa assured residents that they had nothing to worry about.

“These are structures to carry CCTV camera towers,” she said in a statement that was widely publicised in newspapers at the time. “This is part of Durban’s commitment to being a safe city. The cameras are extremely high-definition, and will be monitored 24/7.”

There was no mention of cell masts… after all, it is well known that before a cell mast can go up, the public needs to be informed and a whole complicated process of permissions has to take place. And no-one could have believed that the city could deliberately be lying to them.

Head of Disaster Management, Vincent Ngubane, attended several residents’ meetings around the city where residents raised the fear that these new structures looked uncommonly like cell masts. But Ngubane laughed off this concern… there was no question that these were cell masts, he said.

But what Durban did, in fact, get, was a slew of cell masts across the city, fitted with MTN antennae, in defiance of city planning, real estate, roads, health and safety, and treasury. There was none of the required public participation process, and what stuns most people is just how many towers there are, and how fast they went up. And not a CCTV camera in sight. These masts were built on pavements, in parks, on traffic islands, next door to schools, next to highways, on empty lots. No-one in the vicinity of the masts were consulted at any stage. According to most residents, the trucks simply arrived and the mast went up. The client was always MTN.

Local community papers picked up the issue, asking in article after article how this had been allowed to happen. Questions to the city were ignored. Instead of coming clean, and admitting that some nimble footwork had been performed by city officials, the Metro went on lock-down instead, seemingly instructing staff to lie to the public, telling contractors to remove their branding from vehicles, and adhering to the fiction that these were “camera poles”.

At around that time, MTN’s head of technology, Giovanni Chiaperelli, went proudly on record, saying that their roll-out of hundreds of cell masts and antennae in Durban was a great success, and the rental from these masts would be of huge benefit to Durban’s fiscus.

Opposition parties in council are adamant that this deal has not gone through any committees or meetings, that treasury is not receiving this bonus, and that there is no record anywhere, at any time, of an “infrastructure sharing arrangement” with MTN. The whole thing seems to be a private arrangement between Disaster Management’s Vincent Ngubane and MTN.

Deputy mayor Fawzia Peer also adhered to the assertion that these concrete towers were “camera poles” and that nothing untoward was happening. She replied in an interview that the “camera poles” had been built for the CCTV roll-out, and that the antennae were an afterthought. But a technical expert has shown that a cell mast and a camera pole are two very different things.

“A camera pole is a light, short structure,” said Daniel Barbeau, a retired electronic engineer, “that should not be more than around 10m high – this gives a good view, and is suitable for maintenance of the camera. A cell mast, on the other hand, is a massively rigid and tall tower to prevent any movement of the antennae. Putting cameras on a cell mast does not really make sense, because it is difficult to maintain a camera that high. And whenever maintenance needs to be done, the antennae would need to be switched off. Sharing these two is really not a practical arrangement.”

Proof of this is the fact that most cell masts do not carry cameras, and in several cases a camera pole is situated right next to the cell tower.

Residents across Durban have gone on record in local publications, showing how masts have gone up without planning permission or a public participation process. A photograph shows the plan for a mast in Clare Road, Glenmore, with no municipal stamp. An official in the planning department said all city departments had been told to “back off” when they began to ask questions. Ngubane, apparently, told them to look the other way.

All questions to MTN were referred back to Ngubane, who was, according to the cell company, the points-man for the project.

Ngubane was last year being investigated for fraud and corruption. Asked about the progress of this case, the city responded that it “does not discuss internal issues with the public”.

Additionally, MTN does not have the most squeaky-clean of records when it comes to promoting its business interests: Nigeria, Iran and Uganda have had problems with the way the cell company does business.

City resident Ivor Rixon, who voiced a rather vehement objection to a mast going up on the pavement outside his house, related how a Metro policeman had visited him and threatened him if he made a fuss.

The DA sent a list of questions to the City Manager about this whole project. The detailed questions ask, broadly, just how it was possible for such a massive infrastructure project to happen in almost total secrecy. The letter was written on 7 July and gave the city 30 days to reply.

Three months later, the city responded by providing an example of a single lease between the city and MTN (there are hundreds of these masts and therefore should be hundreds of leases). The lease, on the most cursory reading, contains numerous contradictions and anomalies. Not least of which is the site plan, which does not resemble the actual mast, and is, in fact, in a completely different place. The lease also specifies that the service provider (in this case, MTN) is required to comply with all laws and regulations as specified by law. This is something that MTN has most certainly not done, and something they claim they were not required to do in terms of their “secret deal” with Ngubane.

What has subsequently emerged is that most of the masts do not have consent from the municipality, few have approved plans, none have gone through the public participation process, few have electrical compliance, and very few are actually connected in any way to the CCTV camera roll-out which was the entire justification for the process.

A court case is currently under way, which MTN claims it will “vigorously oppose”. DM

Photo: Cellphone tower masts in and around Durban. In the image on the left a CCTV ‘camera tower’ stands next to the much taller cellular tower mast. Photo: Niki Moore