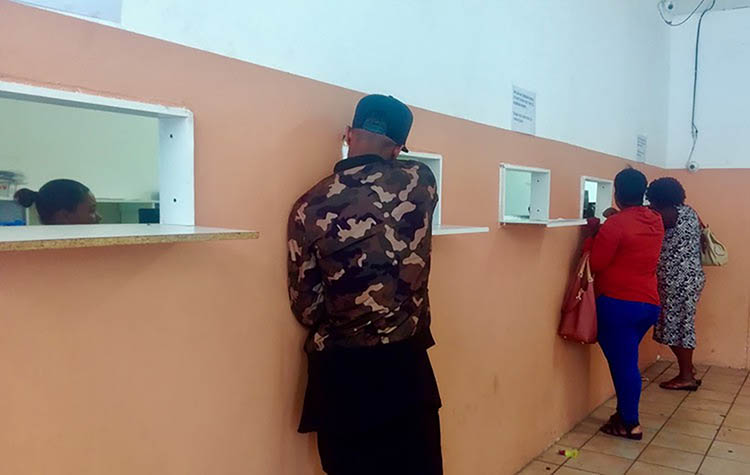 “Conniving loan sharks” must be brought to book, says a member of provincial parliament. By Barbara Maregele for GROUNDUP.

The National Credit Regulator (NCR) is investigating XY Money Loans in Somerset West following complaints by social grant beneficiaries who accused the company of keeping their Sassa cards as collateral for loans.

GroundUp visited a branch in Belvedere Road in Somerset West on 11 October with Lorraine Botha, chairperson of the provincial legislature’s Standing Committee on Community Development.

On arrival, GroundUp found on the front door a handwritten sign stating: “Only Help Sassa”. There was no NCR certificate displayed anywhere in the store as required by law.

There were three people seated in the store, waiting to apply for loans. The only way for them to communicate with the tellers was through small rectangular openings in a wall.

The visit followed a report in Die Son on 4 October which said hundreds of South African Social Security Agency (Sassa) beneficiaries, who had taken out loans with the company, had not received their grants. The beneficiaries told the newspaper that they had been forced to hand over their Sassa cards as security for the loans.

Earlier this year, GroundUp also wrote about XY Money Loans which had unfairly deducted money from a social grant beneficiary, leaving her with very little to buy food or pay her debts.

Asked about the sign on the front door, branch manager Casper Kunene insisted that XY Loans offered short term, month-to-month loans to anyone and did not target grant beneficiaries.

When he could not produce the branch’s NCR certificate, Kunene presented an application letter to the NCR which showed that the company was owned by Xiuyong Chen in Piet Retief, Mpumalanga. He said the parent company was registered with the NCR under the name XY Fashions Trading (PTY) Ltd despite some of its branches trading under the name XY Money Loans. GroundUp confirmed this with the NCR. Rishana Singh of the NCR told GroundUp that any registered company “must display” its registered certificate. “A consumer can request to view this certificate and it must be available to be viewed by the consumer. A credit provider should also display a NCR sticker on its premises,” she said. “We will look into the matter.”

Kunene said about 2,100 of their clients were social grant beneficiaries who came from surrounding areas including Somerset West, Macassar, Sir Lowry’s Pass and Strand. “Most of the social grant people we get are the pensioners,” he said.

Kunene denied the company held Sassa cards as security. He said they regularly handed Sassa cards “forgotten” by people at the store over to the police for collection.

“A person comes with their ID, (Sassa) card or proof of payment so we can see how much you get paid. Then it will be decided how much you can borrow,” he said.

Kunene showed Botha the FEZA card issued to clients where the loans are paid into. “We give you this card and a pin number,” he explained. The card is a standard FNB eWallet service provided to businesses for the distribution of cash to multiple people.

Botha asked Kunene how the company ensured that people, particularly grant recipients, repaid the loans. Kunene said that the funds were recovered through EFT payments and these were usually debited “as soon as the grant money is in”. He said the company “only” charged 5% interest per month. There are then initiation fees and administrative charges on top of this.

Kunene said defaulters were handed over to the debt collecting company, Network Collections, but insisted that the client’s repayment amount to XY Money Loans “doesn’t change” regardless of the defaulting period. At the time of the visit, there were 684 people on the defaulting list. Kunene said the highest repayment amount on the list was R1,300 and outstanding since February.

Hermien Mulder, a Network Collections’ marketing agent, said they only dealt with the non-Sassa clients. Mulder said she collected a list of names from money lenders across the Western Cape. “I go to the client to arrange a repayment plan with them. Under law we charge 5% per month on those repayments. Our head office just adds it on to that fee,” she said. Asked what the additional fees were, Mulder said she didn’t know.

“There are a lot of people not paying. They change their cell numbers, their bank accounts. When we sign them, they go change their bank as well. These are all kinds of things they do so they don’t have to pay,” she said.

Botha said she had written to Western Cape Minister of Finance Ivan Meyer about the company. “This entire entity and its practices are completely unacceptable and these conniving loan sharks must be brought to book,” she said. DM