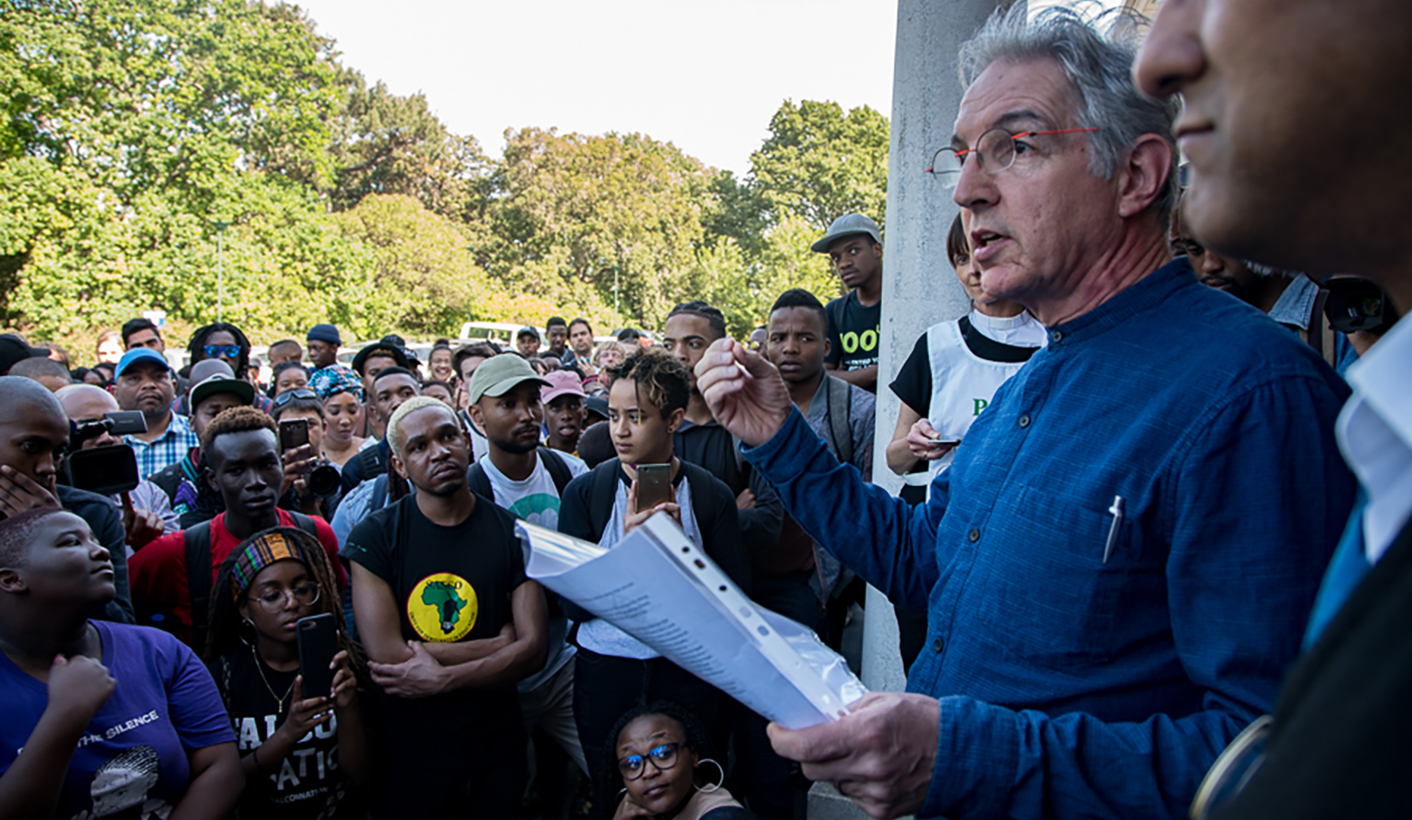 All eyes will be on Finance Minister Malusi Gigaba when he announces the Medium-Term Budget on Wednesday, but some of the people likely to be watching most closely are members of university management, unions, and students. With the government’s report on student fees still apparently locked in the President’s drawer, the budget has to shed some light on what will happen with higher education funding in the next year. Until clarity is given, expect the situation on South African campuses to grow ever more tense – as already witnessed this week. By REBECCA DAVIS.

All that is known thus far is that President Jacob Zuma received the report at the end of August. Daily Maverick enquiries to the Presidency on Tuesday as to when the public could expect the release of the report went unanswered.

It is difficult to know how to interpret the delay in the release of the report, which was specifically commissioned to investigate the possibility of fee-free education for South African students.

One theory has it that if the report’s conclusions are crowd-pleasing – which is to say, it determines that free university education is indeed possible – it will be left to one of the President’s favourites to announce.

This seems to be Nzimande’s theory, too. In his City Press interview, the former higher education minister said that he knew he was due to be axed when the report was not shared with him because “credit was going to be given to someone else”.

This line of thinking was what led some analysts to believe that presidential hopeful Nkosazana Dlamini Zuma would be tapped as the next Higher Education Minister – because announcing free higher education might bring her the public approval her campaign urgently needs.

But it was the relatively low-profile Hlengiwe Mkhize who eventually got the nod to be Nzimande’s replacement, and it seems unlikely that Mkhize – who lacks kingmaker status in any significant way – would be entrusted with the prize of a popular announcement. Neither is it particularly plausible that she would be scapegoated by being made to announce an ongoing fee necessity – if so, why not just hand Nzimande that unenviable job?

This leaves at least two options. One is that the Fees Commission has determined that free education is not feasible, and the Presidency is either dragging its heels in breaking the bad news or still figuring out a way to massage the conclusion into something more palatable.

The second option is that a figure other than the higher education minister will be entrusted (or punished) with making an announcement on the topic soon – which is where Gigaba and his Medium-Term Budget come in.

The cost of free higher education for South African students has been estimated by the South African Institute of Race Relations as amounting to some R71-billion per year. If this is to become a reality, it would require some serious budget gymnastics for Gigaba to pull out of the hat on Wednesday, with implications felt throughout government spending. As it stands, economists have estimated that the budget is already facing a hole of about R50-billion.

The topic of higher education spending is one that Gigaba will have to address to some degree in his budget, so whatever he says is likely to be read as matching the Fees Commission’s conclusions even if the report is not directly cited.

Clarity over the fees issue cannot come soon enough. Evidence that university managers are just as in the dark as the general public was revealed on Monday, when University of Cape Town Vice-Chancellor Max Price released an urgent appeal to the President to release the fees report.

Price explained that the university could neither plan its 2018 budget, nor negotiate with students, until the report was made public – due to a desire not to pre-empt the Fees Commission’s findings. Other universities have gone ahead unilaterally, with Stellenbosch earlier in October announcing an 8% fee increase. The University of the Free State has also mooted this raise.

UCT’s Price appeared to confirm that such an increase was on the cards for UCT too in his Monday statement, announcing that “the UCT allocation from government is expected to increase by only 4% in 2018 while costs will increase by about 8%”.

Statistician-General Pali Lehohla told journalists that in 2016, higher education institutions received just over 32% of their revenue – or R21.6-billion – from student fees. This has dropped from 2015’s 34.9% as a result of the 0% fee increase last year, but simultaneously university expenses have been steadily rising – by 10% between 2015 and 2016.

Compensation of employees remains the most expensive component of running a university at just over 57% of total expenses.

“What the numbers are saying is that the education system at universities is capable of providing a maximum of 500,000 students, but it has a million students,” Lehohla said.

He explained that every year around 150,000 students enrol in their first year of studies countrywide. Lehohla said that logically speaking, the second-year numbers for that cohort should be the same or fewer (allowing for drop-outs and deaths), and the same for the final year.

Given that most degrees are three years in duration, Lehohla said, “Add that up and you must have a university population of 450,000.” Yet instead, the total number of students enrolled at any given time is closer to 1-million. Even accounting for small numbers of postgraduate students, Lehohla said the figures did not make sense.

“You are paying for people who should not be there – who should have passed and gone,” Lehohla said. “That [extra] 500,000 is not necessary.” Earlier, he had expressed it thus: “Something is happening in the system to trap people to not leave.”

This week has already seen unrest brewing on South African campuses in light of the continuing uncertainty around fees, with ongoing protests at the University of the Free State, while the University of Cape Town was shut down on Tuesday.

At UCT, Student Representative Council president Seipati Tshabalala handed Price a memorandum of demands in front of a crowd of students. They included solutions to housing for students who do not get residence offers, clearance of historical student debt for 2017, no financial barriers to 2018 registration, a 0% fee increase – and the immediate release of the Fees Commission report.

The students gave UCT until 16:00 on Wednesday to respond, but the situation regarding fees may become clearer some hours before that deadline – when the finance minister steps up to the parliamentary podium to tell the country what government is doing with its money. DM