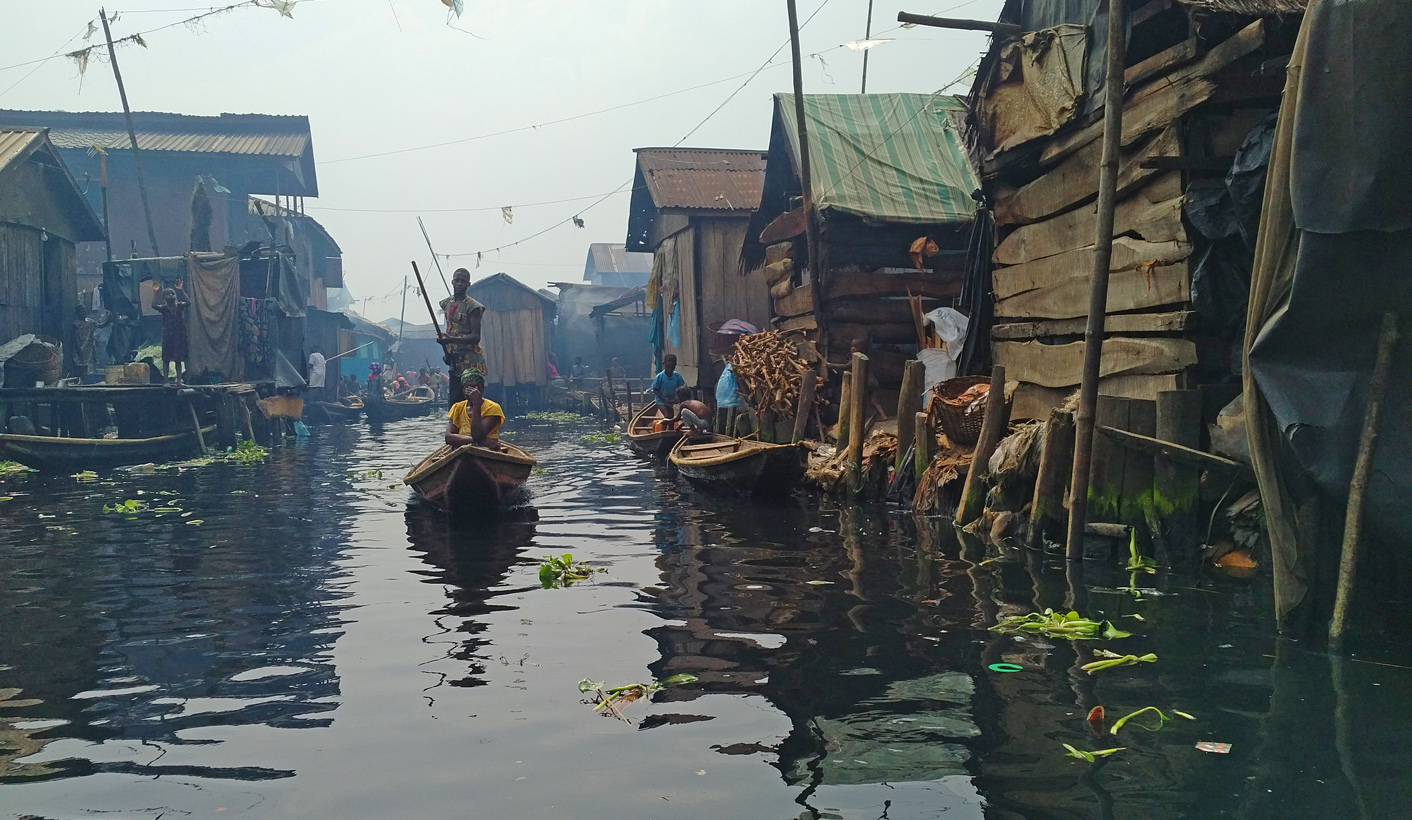 Africa’s largest city, Lagos, represents both the promise and the fear of the intersection of demography and urbanisation. Its population has more than doubled to around 21-million over the last 20 years, and it is estimated that it will double again in the next three decades. This rapid growth has placed inordinate strain on already faltering infrastructure, especially housing, transport and electricity. Fixing these legacy problems will not be easy; preparing for future growth magnifies these challenges. By GREG MILLS and DICKIE DAVIS.

All photos by Greg Mills.

“The main problem with trying to upgrade these areas,” says Akin Tijani, Director of the Lagos State Urban Renewal Company – identifying the obstacles facing government’s ‘adaptive reuse’ plan while walking the market of Balogun – “is to win the trust of the people.”

Africa’s largest city Lagos represents both the promise and the fear of the intersection of demography and urbanisation. Its population has more than doubled to around 21-million over the last 20 years, and it is estimated that it will double again in the next three decades. This rapid growth has placed inordinate strain on already faltering infrastructure, especially housing, transport and electricity. Fixing these legacy problems will not be easy; preparing for future growth magnifies these challenges.

Photo: Smoke on the water in Makoko.

Around two-thirds of the city’s people live in slum conditions. Attempts to reduce the housing deficit, estimated to be at least two million units, are made more difficult by mortgage interest rates of some 38%, this a reflection both of heavy government borrowing in the market to fund its own needs and high risk. Around 60% of mortgage holders default. Nigeria’s mortgage debt/GDP ratio is less than 0.5%, reflecting the very low rates of home ownership. By comparison, South Africa’s is 37% and the US’ 75%. The bars to ownership are compounded by the high cost of building materials, legendary difficulties in determining land title, opaque building regulations and a sedentary legal system.

An opinion survey recently commissioned by the Brenthurst Foundation shows that just 21% of Lagosians find housing in the city affordable.

All this has hampered low-cost housing schemes. Upgrades to slum areas have been hobbled, too, by a lack of continuity between governments. A pet project for one governor is not necessarily the same for another.

Photo: Makoko has a thriving economy centred on fish.

As a result, many people live in extremely tough conditions, amid open sewers and strewn plastic garbage. Up to 60% of Lagos state experiences floods each year. The city produces 210-million litres of water per day against a requirement of 794-million litres. Sixty-nine percent of households lack access to sanitation and a million-plus families do not receive any waste collection.

Unsurprisingly, some 86% of Lagosians agree that water and sanitation urgently needs to be improved.

Photo: … but you don’t want to eat here.

The level of mistrust between government and the people has been compounded by episodic slum demolition. Latterly, more sensitive approaches have been the norm, but many people prefer to remain put in the absence of visible alternatives; as one community leader put it, “they are frightened that they will lose what little we have”.

Photo: Pee at your peril.

A poorly integrated transport system, and a failure to fully employ the city’s numerous waterways, means that Lagosians spend nearly three billion hours in traffic annually, an average of four hours each per day. Currently the main port of Apapa is hamstrung by work to upgrade the access road, requiring trucks to queue for five days, instead of the normal two to three, to collect containers. Yet no less than 90% of daily passenger movement in Lagos is by road. Although government has introduced a Bus Rapid Transport system alongside its Lagbus network, is building a monorail and plans to introduce a new ferry system, so far the promise has outweighed delivery. There is little doubt that Lagosians deserve better than the service provided by 10,000 yellow minibus “Danfos”, famous for their lack of road manners (even by Nigerian standards) and touts hanging out of the open doorways.

Little wonder then that 87 % of the city believes that transport urgently needs to be improved.

Photo: The dreaded Danfos are everywhere.

And life is made tougher by a lack of electricity. Despite Nigeria’s status as Africa’s largest oil producer, with some 2.4-million barrels per day in 2016, the country has an installed capacity of just 7,100 MW, of which 4,100 MW is available for generation. On average Lagos receives just 700 MW of this capacity. Just 45% of the population has access to the power grid. As a result 80% of households rely on diesel generators. At the core of the problem is a culture of non-payment and a practice of illegal connections, with just 20% paying their bills.

“Too many people,” says one major producer, “believe that power is CSR [corporate social responsibility].” Producers say that the culture of lack of payment combined with an unrealistically low tariff has resulted in a situation where they have been forced to operate at a loss, and thus have little incentive to add capacity to the grid.

Some 82% of Lagosians surveyed say that electricity provision should be improved urgently.

Lagos State Governor Akinwunmi Ambode, elected in May 2015, has an ambitious agenda to transform the city into the continent’s third largest economy. The state government has a bold plan to improve electricity payment collection rates and to add 3,000 MW of capacity, through the use of independent power providers delivering directly to the distribution network. As with his other reform initiatives, implementation of these bold plans will require resolute political will, considerable determination and a mastery of the detail.

It’s an equally vicious or positive cycle. For the backdrop of attempts to address these three critical areas of housing, transport and electricity is a cocktail of weak governance, widespread corruption, a time-consuming legal system, and anaemic economic growth highly vulnerable to the vagaries of oil prices.

Future growth at the rate Lagos requires will be dependent on moving goods and people cheaper and quicker, giving people both a stake in the system with a better launch pad through improved housing, and by adding value through increased electricity supply. Underpinning all of this will be Nigeria’s success in attracting the necessary capital. That will depend on ensuring a rate of return commensurate with risk. Currently investors expect a return of investment at around 25% precisely because of the risk; for the economy to grow this needs to be reduced.

But Lagos has one tremendous asset, often parodied and overlooked in caricatures of urban chaos, risk and corruption: its people.

As we walked through the market, we stopped to chat to Chioma, selling a small stack of vegetables. She makes N10,000 per day ($28), paying N50,000 per month to rent her small square of tar to the local organisers. The fish sellers from Makoko pay N300 a day for their stall as well as a monthly fee.

The most impressive aspect of Lagosians is in their relentless energy, driven by a knowledge that no one will help them but themselves. “The guy selling things in the traffic,” says one hotel manager, “will make 350 naira in the morning, perhaps, with which he will buy lunch. And he will run around for another five hours in the afternoon to make the same for his dinner.”

Lagos is not only the largest city in Africa, surpassing Cairo in 2012, but also the fastest growing one, registering an influx of 86 people per hour. Turning Nigeria’s oil into wealth has so far worked well for an elite. Translating the widespread energy of Nigerians into wealth for the wider population is much more difficult, depending on resolute political will, better governance, government planning, persistence and execution. DM

Mills and Davis are with the Brenthurst Foundation, and are working currently in Lagos.