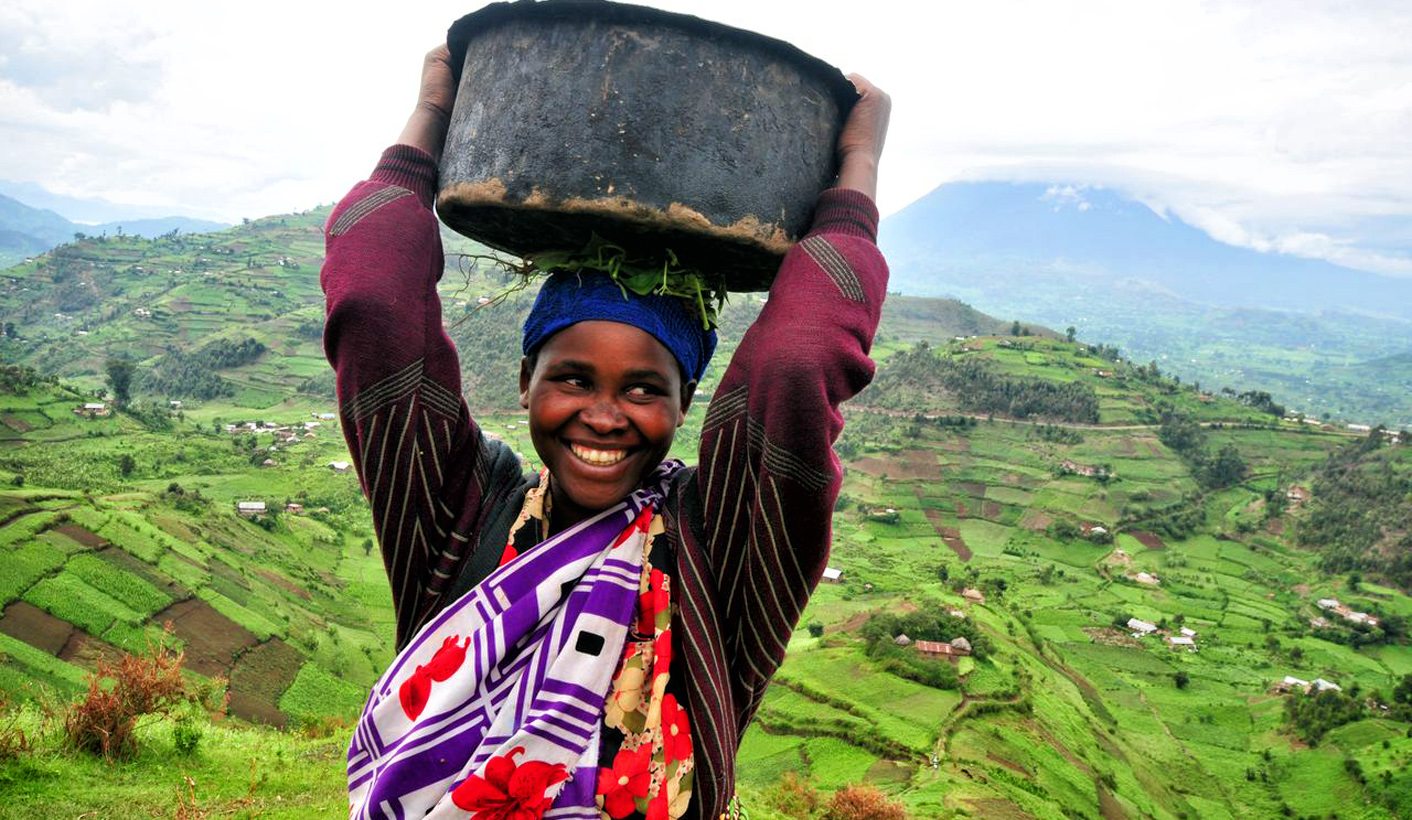 Is this finally the time for Africa’s agricultural boom? Yes, if women are given a seat at the table, writes MANKA ANGWAFO.

As we conclude a week of celebrating women with the International Day of the Girl and the International Day for Rural Women, it’s worth asking: do governments have any idea what life is really like for female farmers in Africa? With such a relentless focus on urbanisation and Africa’s fast-growing cities, do they care – or at least, care enough? The untold tales of some of the female farmers with whom I’ve worked in Cameroon suggest a number of ways policy-makers could finally unlock some of the sector’s vast potential at the smallholder level. It is here, not the grand commercial schemes that so excite African leaders and foreign investors, where the greatest impact on rural African communities will be felt.

In Babessi, in the plains just below Mont Oku, where many female farmers live and farm, it was a good harvest this year.

“We are very happy with our harvest,” says Clarisse. “The corn is large and the grains are bigger than we are used to.”

At 26, Clarisse is a wife, mother of four and sole provider of her family. Her husband has odd jobs as a casual labourer – from time to time.

“Our corn [also] did very well this year. My women are very happy,” Margaret says. At 34, she and her group of female farmer friends are content with their harvest. They all wonder if the support they are receiving will be sustained.

Average yield per hectare in Babessi typically hovers below two tons, but this year, thanks to partnerships, training and extension services, a few hundred farmers have seen their yields increase to almost 5 tons per hectare in just one planting season. Most of them are sole income earners in their households. In Babessi, as in the rest of Cameroon, land ownership is illegal under the age of 40. Women like Clarisse and Margaret have no means to secure financing, as local customs prohibit women from inheriting family wealth.

Clarisse used to live in the capital city, Yaoundé, where she was set to complete technical school and become a seamstress. Following the sudden death of her father, she returned to her village and, without savings or assets to raise capital for a business, she was advised to marry the first suitor who asked for her hand. She was 18.

Her fellow farmer, Margaret, grew up in a large household with 12 siblings. Though she finished high school, she could not afford university. With her skills, she worked as a teller at a local savings and loans co-operative. One night on her way home, she was raped by a colleague and found herself unable to continue working. The resulting pregnancy and stigma from the rape pushed her to marriage at 22.

Meanwhile, in the neighbouring village of Bangulan, Clovis also shares her stories with our extension workers. At 19 and a mother of two, she had stopped going to primary school at 10 to help her mother on the farm. This is not unusual. An estimated 70% of rural farm children between the age of five and 14 in Africa forfeit school in order to provide assistance at the farm. A majority of these are girls.

About 75% of Africa’s food is still produced by poor smallholder farmers – most of whom are women with stories like these, where disadvantages owing to their sex are legion. These women are all part of Grassland Cameroon’s outreach programme, which provides microloans, inputs, training and extension services to rural farmers. While the objective of the programme is to improve the livelihood of all rural farmers, young women comprise more than 70% those receiving assistance.

Boosting Africa’s food production is imperative for the continent to survive its unprecedented demographic boom. A laser-like focus on improving the agriculture sector is thus critical to more inclusive and sustainable economic growth. Governments are mostly pushing for large-scale farming and courting foreign conglomerates and investors with large swathes of land.

Large-scale commercial farming is necessary to improve food security across the continent but much of the yield from such commercial farms targets the export market, which has more lucrative profit margins, leaving very little value in Cameroon.

In order to create value, governments must focus on smallholder farmers like Clarisse and her fellow farmers by encouraging entities that engage with farmers responsibly and invest in their skills. As caretakers, and breadwinners, improving the livelihood of rural female farmers by increasing their yields has much larger developmental impact. Indeed, the consequences for families can be felt across generations.

There is a confluence of reasons why Clarisse is poor – little or no access to credit, shoddy farming techniques, high dependency on manual labour, to name only a few. Ensuring that farmers like her have access to inputs, training and markets will result in increased value for all stakeholders. Furthermore, for countries in the Congo Basin, like Cameroon, average rainfall is over 53 inches a year and humidity levels are up to 86%. So, a holistic approach to agriculture that improves both production, and post-harvest support is necessary for food security and growth.

While much focus is placed on improving productivity and agro-processing in Africa, little has been given to smallholder land rights, access to finance, training and extension services. Agricultural policies should focus on de-risking farming and providing the same rights to women and youths as older men enjoy. Less than 20% of women in Africa have ownership of the land they exploit compared to over 80% for African males. In Nigeria, women are half as likely to receive inputs, training and extension services from public programmes compared to men.

Programmes that remove risk in agricultural investments for smallholders should be implemented as a matter of urgency. They would bring down interest rates, potentially unlocking credit from financial institutions. For example, micro-insurance could reduce the risk involved in lending to smallholder farmers. In the simplest of scenarios, farmers would purchase micro-insurance directly from local aggregators or from local insurance companies, and get a payout when there is insufficient or too much rain – both scenarios posing significant negative effects on yield.

Micro-insurance penetration in Africa is still under 5% of the population, who live on less than $2 per day (comprising roughly three-quarters of the continent’s total population). In the central African sub region, where insurance licences are granted via a regional body made of up former French colonies, micro-insurance penetration rates are non-existent for most countries, and under 1% in Cameroon—the largest economy in the sub region.

Though the number of people covered by micro-insurance polices in Africa has increased more than 80% from 2005 and 2010, few insurance companies are building the networks necessary to get rural farmers covered. So, Clarisse and her farm mates still are not covered by any insurance policies, keeping access to finance further out of their reach.

Farmers in this region like Clarisse, Margaret and Clovis have experienced a myriad hurdles as rural female farmers. Unfortunately, their stories are not unique to Babessi, or Cameroon. Sub-Saharan Africa has the highest share of rural women in agriculture, with the highest levels in Sierra Leone and Chad (both around 60%), but rural female farmers across the world suffer a similar plight. Globally, the share of rural women in agriculture keeps increasing, but this increase is not due to increased access to land or finance. Instead, it is a by-product of male migration to cities for industrial jobs, or armed conflict that has resulted in a reduced male population. Were gender parity a reality, total global agricultural yield would increase by 2.5% to 4%, reducing the number of undernourished people by 100- to 150-million people – a major global achievement.

In Africa, it is the woman’s job to feed her family, both literally and figuratively. As policy-makers, development advisers and business leaders focus on agriculture to feed its burgeoning population, they need to be aware that Africa will not become a bread basket for the world unless its women are given a seat at the table. Otherwise, we are biting the hand that feeds us. DM

Manka Angwafo is the founder and Managing Director of Grassland Cameroon. She has a decade of experience in international development. After a brief stint on Wall Street, she spent seven years as a consultant at the World Bank Group. When she’s not knee-deep in the bushes, she’s either got her nose in a novel, hiking, or tweeting about tennis grand slams.