ANC Leadership Race: Slowly and chaotically, branches are making up their minds 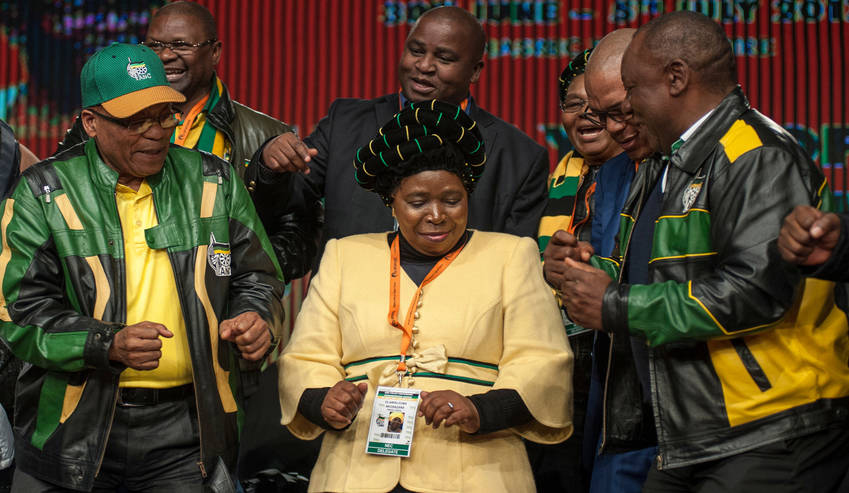 Across South Africa ANC members spent part of their weekend locked up in meetings to choose who to send to the party’s conference in December. Branches are the building blocks of the ANC and have this year been given the power of deciding directly who they want to contend for the party’s national leadership. In a primary school hall in the city of Klerksdorp there was serious debating, some shouting and then celebratory hooting as an ousted leader, a former convicted murderer and a municipal manager slogged it out under the watch of armed private bodyguards. By CARIEN DU PLESSIS.

It’s on the wrong side of 9pm on Sunday night in a somewhat sleepy Klerksdorp, a small city in the North West built on mining and agriculture.

Inside the 40-year old yellow face-brick school hall of Laerskool La Hoff the ANC branch meeting for Ward 16 was slowly dissolving. A quorum was reached at last around 6pm, four hours after the official starting time, with 107 out of the 199 members in attendance. They were rounded up from their homes and brought to the venue in private cars, including a very old woman who walked at snail’s pace with a Zimmer Frame. Another woman loudly scolded the man who brought her there. Her cries about “politicking” bordered on hysteria.

After witnessing this, it’s hard to imagine how branches with thousands of members will quorate.

After the new branch leadership and the delegate to the ANC’s December conference were chosen (just under 5,000 branch delegates will attend), only those with the most to lose were still slogging it out.

Black Ramaphosa campaign T-shirts were distributed straight after the meeting from the boot of a car that had been parked along on the hall’s doorstep. A white Audi hatchback drove up and down the street in front of the school a few times, hooting.

“One noisy member”, however, declared a dispute, newly-elected chairperson Tshepo Belebese said in an interview on the pavement (held there because the caretaker had to lock up the school). The member turned out to be Thabo Mokwena, municipal manager of Mahikeng, apparently “seconded” to this position by ANC Youth League leader and former MEC in the province, Collen Maine, and who awarded an ANC funder a R165-million contract without putting it out to tender. He lives right next to the school.

Mokwena, who, it turned out, stood right next to this reporter listening in to Belebese, demanded an interview too. Turned out that one Mix Masekwa, a local elections candidate for ANC splinter Forum 4 Service Delivery last year, attended the branch meeting and is still listed as a member when he should, according to the party’s rules, have been suspended.

Mokwena said he’d take his dispute to the party’s provincial leadership, with the aim of voiding the meeting, but detractors, who stood around us listening to the interview, laughed and said Mokwena was the one who was supposed to discipline Masekwa, but didn’t.

Some suggested Mokwena’s job might be on the line as provincial ANC chairperson and premier Supra Mahumapelo would not be happy about the branch nominating Ramaphosa.

ANC MP and former Rustenburg mayor Matthew Wolmarans, who was jailed for the murder of whistle-blower Moss Phakoe in 2009 but later acquitted, was sent by the provincial executive committee to preside over the meeting. Wolmarans, a close ally of Mahumapelo, didn’t stick around for interviews but, it was said, he didn’t seem to support the dispute.

At the centre of the meeting, however, was China Dodovu, former Mahumapelo ally turned arch-enemy. He said he should be the 200th member of the branch, but even though he holds a membership card, he did not appear on the official, watermarked, membership list of the branch that came from Luthuli House.

His (discreet) support for Forum 4 Service Delivery, while retaining ANC membership, is probably to blame for this, although Dodovu claimed his membership had been in dispute after he pointed out that former Eskom boss Brian Molefe, could not be sent to Parliament by the North West since he wasn’t a resident – and therefore a member – there.

He claimed his membership had been in dispute after he pointed out that former Eskom boss Brian Molefe could not be sent to Parliament by the North West since he wasn’t a resident – and therefore a member – there.

Dodovu, former provincial deputy chairperson and former MEC for cooperative governance and traditional affairs, was suspended from these positions in 2013 after being charged with the murder of Oubuti Chika, an ANC regional secretary who lived in Klerksdorp. Dodovu denied guilt and the charges were later dropped.

Dodovu, who took the lead in mobilising for Ramaphosa’s visit to Potchefstroom on Saturday, also seemed to be in charge of rounding up his supporters for Sunday’s branch meeting. He stood by the gate, patiently counting members as they arrived, until there were enough, according to ANC rules, to hold the meeting.

Afterwards, as the pavement emptied of groups of chattering members, Dodovu’s allies and some family members, also in attendance, expressed concerns about his safety going home. Mokwena had arrived with three armed bodyguards, dressed in jeans and black jackets, in tow. These kept watch in front of the school hall doors as people came in for the meeting, and were now somewhere in the road in one of the luxury cars that made up Mokwena’s posse.

The burliest of the three earlier said they were private security guards. They had undergone six months of training for the job in Standerton. While vigorously adjusting his crotch intermittently, the burly one claimed he’d never killed anyone. But – and he beat his chest, sincerely bragging – with a handgun and “the right heart”, it would be easy to.

As these words are written, the early results are emerging from branch meetings on whatsapp and social media on Sunday night and Monday morning. Those that could be verified suggest that, although things are going more or less as predicted, there are some surprises. (There should also be a disclaimer to say that these results were only the ones put out there on social media, and there is still a few weeks left for all meetings to happen. Although nominations are also a good indication of how members will vote in December, things could change radically too.)

In Co-operative Governance and Traditional Affairs Minister Des van Rooyen’s branch in Khutsong, it’s said that Ramaphosa got 94 of the votes with Dlamini Zuma getting eight. Van Rooyen is a close ally of President Jacob Zuma and also has close links with the Gupta family.

In Mpumalanga, for instance, Mathews Phosa was nominated for president by 12 branches in Ehlanzeni region around Nelspruit, while the name of ANC treasurer-general, Zweli Mkhize, emerged in a branch in Soshanguve. Mpumalanga ANC chairperson and premier, David Mabuza, has expressed support for Mkhize and his campaigners have claimed that he has the province with the second largest delegation to the ANC province in the bag.

As far as could be verified, the things are going well for Ramaphosa in Gauteng, as expected. Out of six branch meetings in Johannesburg, for example, five have nominated him. Out of 17 branches in Tshwane, only one nominated Dlamini Zuma, while 15 nominated Ramaphosa.

In Ekurhuleni, where the leaders declared they were in favour of Dlamini Zuma, four branches have so far nominated Ramaphosa.

In Limpopo, Ramaphosa has taken an early lead in the nominations, although a couple of branches also went for Dlamini Zuma.

In the Northern Cape, surprisingly, Dlamini Zuma has secured 24 out of 26 branch nominations, according to a whatsapp message which broke the results up into sub-regions. The leadership in this province supports Ramaphosa.

He is also in the lead in the Southern Cape, with 14 out of 16 branches nominating him, one nominating Dlamini Zuma, and one Human Settlements Minister Lindiwe Sisulu.

In the one result available from KwaZulu-Natal, from the Moses Mabhida region, Dlamini Zuma has, as expected, been nominated by a branch.