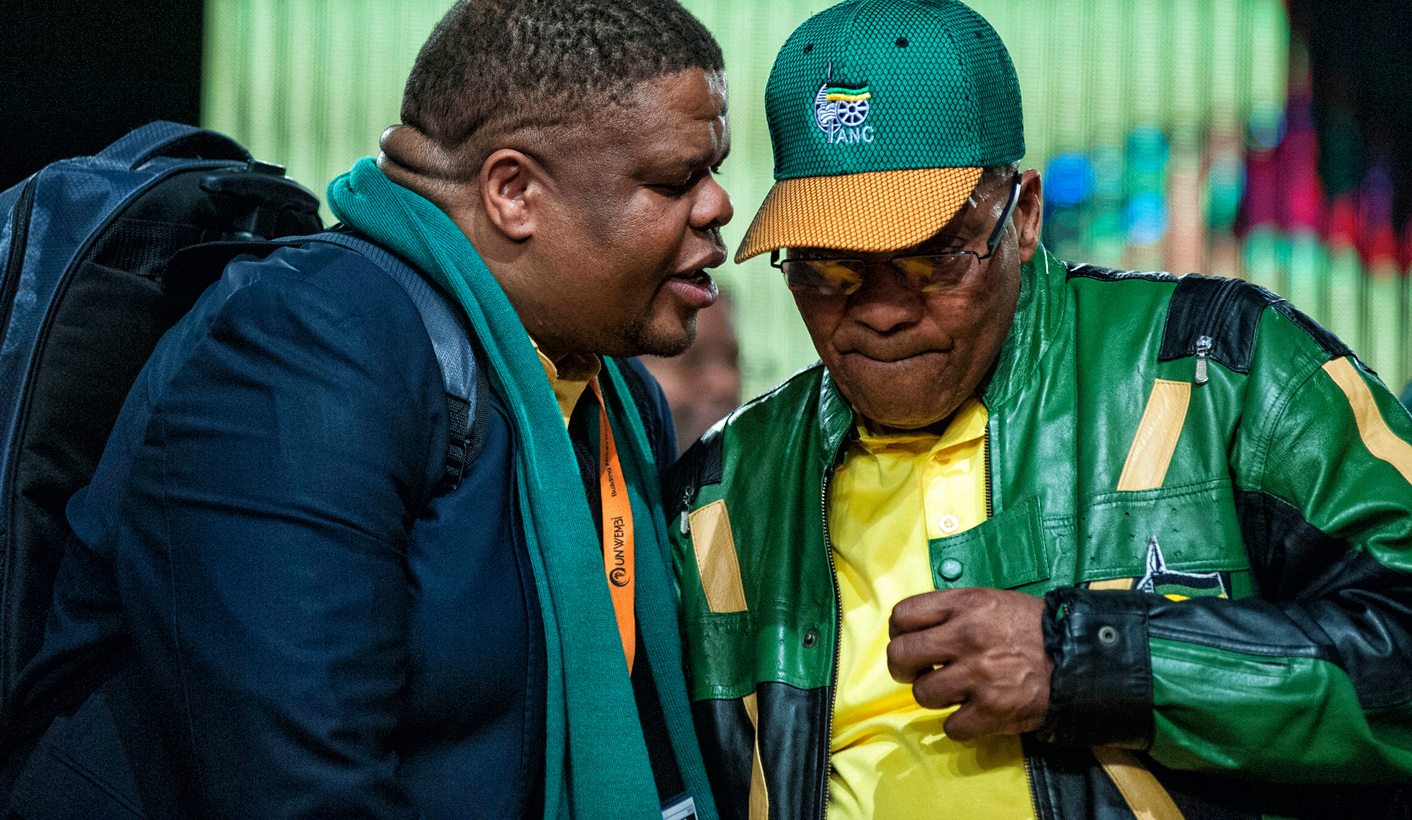 President Jacob Zuma’s Tuesday Cabinet reshuffle was greeted with almost unanimous concern from quarters unconnected to the ANC. While the axing of Higher Education Minister Blade Nzimande is widely seen as the underlying motive, particular unease also accompanies the move of State Security Minister David Mahlobo to the vexed Energy portfolio. And aside from the specifics of the new appointments, one fact is obvious: it serves nobody’s interests, except the President’s, to have such a rapid turnover of ministers in such key positions. By REBECCA DAVIS.

“It has just proven that Zuma is going to purge anyone who attacks him, or who is in his way to elect a successor,” United Democratic Movement leader Bantu Holomisa told Daily Maverick on Tuesday.

Holomisa was referring specifically to the axing of Higher Education Minister and South African Communist Party general secretary Blade Nzimande, with Nzimande having been an increasingly vocal critic of Zuma in recent months.

“It is clear that the relationship between Zuma and Blade [Nzimande] has broken completely,” Holomisa added.

His view was reiterated by numerous opposition party politicians following Tuesday’s Cabinet reshuffle. The DA’s Mmusi Maimane characterised the shuffle as “the latest move in Zuma’s war against anyone who opposes his project of State Capture”.

“We know that Blade [Nzimande] has been a thorn in the flesh [of Zuma], especially with the SACP,” the Inkatha Freedom Party’s Narend Singh told Daily Maverick, while Freedom Front Plus leader Pieter Groenewald described the shuffle as “revenge on the SACP”.

This line of thinking was voiced most forcefully by the SACP itself, with deputy general secretary Solly Mapaila terming Nzimande’s removal as “an attack on the SACP”.

Not everyone was shedding tears for Nzimande, however. Deputy leader of the Congress of the People (Cope) Willie Madisha told Daily Maverick that Nzimande’s ousting was “history repeating itself”.

Said Madisha: “What is being done to [Nzimande] now is exactly what he did to Thabo Mbeki 11 years ago, [Nzimande] was together with his friends, including Zuma, mobilising against Thabo Mbeki.”

Madisha has some skin in this game: he was booted out of the SACP in 2008 following a dispute between him and Nzimande over a R500,000 donation which Madisha claimed he handed to Nzimande, who denied ever seeing the money.

In the immediate aftermath of the shuffle, the emphasis of analysis was placed on the possible implications of Nzimande’s sacking for alliance politics, with little time for reflection on Nzimande’s term as Higher Education Minister.

The DA’s shadow education minister Belinda Bozzoli told Daily Maverick: “Blade has run out of steam and I would suspect is probably quite relieved.”

She suggested that his tenure as Higher Education Minister will probably be largely remembered for the #FeesMustFall unrest.

“He was warned by many people, including me, of the risks of not increasing government subsidies [for universities] over the years and brushed those aside,” Bozzoli said. “His is not a great legacy, but on the other hand he has overseen a relatively stable department, certainly not riddled with corruption. By the ANC’s low standards, he’s done a reasonable job.”

His replacement in the Higher Education portfolio is Hlengiwe Mkhize, who has been Home Affairs Minister for the last six months. With the government’s report on student fees yet to be released, Mkhize takes on an unenviable role at a difficult time.

“I don’t think Mkhize has got any oomph rather than just academic qualifications,” the UDM’s Holomisa said.

The IFP’s Narend Singh voiced the hope that Mkhize’s academic background – she holds higher degrees in Psychology – would at least stand her in good stead in her new position.

Bozzoli pointed out that Mkhize has been the chair of the board of the University of Zululand during an extremely troubled time for the university, which has seen the institution put into administration twice.

Overshadowing the movement of Mkhize, however, was the transfer of State Security Minister David Mahlobo to the Energy portfolio.

Reflecting on Mahlobo’s time at the State Security Agency, Right2Know’s Murray Hunter told Daily Maverick: “In three years, Mahlobo went from being a little-known Mpumalanga MEC to being one of Zuma’s most prominent allies. During that time, we saw a dangerous creep of state security into our politics and public life: serious allegations of a rogue SSA unit targeting rival politicians, the use of SSA slush funds to set up a bogus union, and the rise of paranoid accusations of ‘regime change’ against critics of the government.”

It is Mahlobo who is now being handed the reins to one of South Africa’s most important government departments.

“There is speculation of course that moving Mahlobo from where he was was occasioned by the fact that [Zuma] might want to send him to Russia now and again,” said Holomisa – a reference to the nuclear deal with Russia that President Zuma is said to be desperate to conclude before the end of his term in office.

Makoma Lekalakala, an activist from the anti-nuclear group Earthlife, told Daily Maverick that the shifting of Mahlobo to Energy may be read as a sign that “the project of nuclear expansion has got to happen, through thick and thin”. She said the group would be scrutinising matters around nuclear very closely.

“What is of significance is that [Bongo] is from Mpumalanga,” suggested the FF+’s Groenewald. Mpumalanga is shaping up as a critical province in the ANC’s leadership race, because it will send the second greatest number of delegates to the December electoral congress.

Groenewald also points out that Bongo has been deployed by the ANC to sit on a number of ad hoc Parliamentary commitees – including those looking into the selection of the public protector and the funding of political parties – which Groenewald interprets as a sign that Bongo is happy to do Zuma’s bidding.

Zuma’s appointment of a new Communications Minister, in the form of Mmamoloko Kubayi, came on the same day as a court ruling set to curtail that minister’s powers in future. The case was brought by Media Monitoring Africa, which argued that the ability of the Communications Minister to have the final say in appointing senior executives at the SABC radically undermined the power of the SABC board. On Tuesday, the courts agreed.

“It’s a massive, massive gain,” Media Monitoring Africa’s William Bird told Daily Maverick. “Go back through all these [SABC] crises over the last decade and you’ll see ministerial interference has been one of the biggest challenges.”

Bird’s enthusiasm over the court ruling was tempered by the news of the new Communications Minister – the seventh one in seven years.

“It’s just extraordinary that the communications sector can be treated with such contempt that (ministers) can be changed in this manner,” Bird said. He charged that the rapid turnover of ministers is a “deliberate strategy to create overriding chaos – to make sure the SABC is in the state that it’s in, and push through other deals”.

Possibly the most surprising aspect of Tuesday’s reshuffle, however, was the fact that presidential contender Nkosazana Dlamini Zuma did not emerge with a ministerial post – as had been widely speculated would happen in order to strengthen her hand in her leadership bid.

“Nkosazana Dlamini Zuma is not stupid,” was Holomisa’s comment on the matter. “She has been at pains to try and be seen as herself, and not as a lackey of Zuma.”

Groenewald suggested that there was still time for Zuma to act to promote Dlamini Zuma. “It is not impossible that in November, Zuma can replace Cyril Ramaphosa as deputy president [with Dlamini Zuma],” he speculated.

From some of those within the ANC, a positive spin was put on the day’s events.

“The replacement of comrade Blade Nzimande is long overdue,” stated the Western Cape’s ANC Youth League. ”It has been clear for some time that he was distracted by the SACP’s debate on whether it should participate in the 2019 general election from driving the ANC’s agenda of free higher education.”

The ANC branch also commended President Zuma on the appointment of Buti Manamela as Deputy Minister of Higher Education, as “yet another indication that a younger crop of leaders are being given greater responsibility in the state”.

Its statement concluded with a call to Cabinet members to “not allow themselves to be used as cannon fodder in the run-up to the conference in December”.

With the new appointments seemingly motivated in large part by narrow political interests, that may be easier said than done. DM