New tuberculosis drugs are more effective and may be less toxic. Why are they still unavailable? 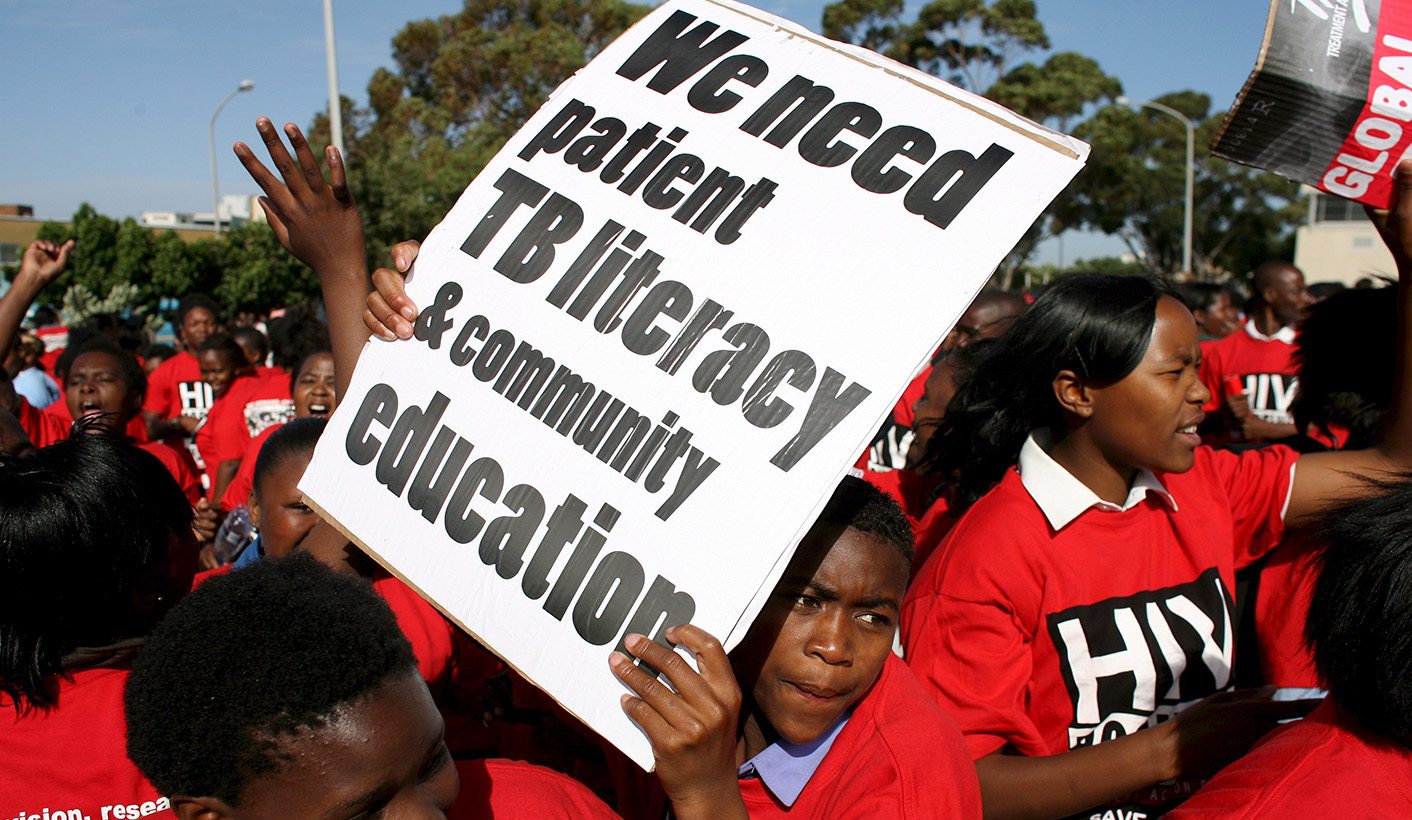 The start of 2017 saw concern over a sharp increase in the rise of drug- resistant TB in South Africa. TB is killing millions each year. Last week, Médecins Sans Frontières published promising early data on the use of two new TB drugs, delamanid and bedaquiline, among patients living with drug-resistant TB in Khayelitsha, Cape Town. But availability remains the biggest concern. By MARELISE VAN DER MERWE.

Sinethemba Kuse, 18, invited her friends and family to a celebratory party on 22 September. But it wasn’t a birthday or graduation: the Khayelitsha teenager had taken the last of her TB medication.

Kuse was diagnosed with multi-drug-resistant tuberculosis (MDR-TB) just before Christmas when she was just 16. Her grandmother had lost all hope, she says. She thought Kuse was going to die.

It was already a difficult time. “I lost my aunt in December, the one I was living with because my mother died when I was still a baby,” says Kuse. “The day my aunt was laid to rest, I started getting sick. I did not have an appetite. My skin colour was pale and I was shaking, sweating a lot at night. I did not enjoy all the things I used to do.” She was given treatment but became sicker. She bled, vomited and became dizzy. She suffered a skin reaction. Upon returning home from the Eastern Cape after the festive season, she suffered another blow. She did not just have MDR-TB. She had extensively-drug-resistant TB – XDR-TB, which was far more serious.

XDR-TB spreads the same way as all TB, but it is a relatively rare form of MDR-TB. It is resistant to almost all drugs, including two of the best first-line treatments: isoniazid and rifampin. It typically does not respond to second-line treatments either, such as fluoroquinolones, amikacin or kanamycin. According to the World Health Organisation, it generally requires treatments that are more expensive and the prognosis is generally worse. The availability of drugs, as well as early detection, play a major role.

“I just said to myself, this is it, I am going to die, because many who suffer from XDR-TB die. I just slept and worried. I could see my grandma was hurting and all the family members too,” says Kuse.

Kuse was fortunate. She is one of the patients treated on Medicins Sans Frontieres’ TB programme in Khayelitsha, one of the few sites in South Africa where delaminid and bedaquiline, which are used to treat MDR-TB, are available. Her doctor referred her to a counsellor who offered her the option of delaminid. He also warned her about the side effects, which included possible damage to the heart.

The side effects of delaminid have been a point of extensive discussion and study. Most common, affecting up to a third of patients, are nausea, vomiting and dizziness. Anxiety, tingling and shaking can also occur. The more serious side effect is known as QT prolongation, a change in the heart’s electrical activity that can potentially cause life-threatening changes in the heart rhythm.

Nonetheless, a 2015 study emphasised its effectiveness in treating TB, with led study investigator Dr Andra Cirule to argue for its benefits. “XDR-TB is one of the deadliest and most difficult forms of TB to treat. More new medicines are urgently needed to prevent XDR-TB from becoming a death sentence. If confirmed, the analysis shows that delamanid may be an effective option to improve the current standard of care,” Cirule said.

Other researchers have argued that the newest drugs may in fact have fewer side effects than older treatments. The Centre for Disease Research and Policy cites studies on both delanimid and bedaquiline, pointing out that older drugs also have severe side effects but are less effective. Many existing TB treatments are “limited, expensive, and often toxic, and the drug regimens can last for up to two years,” they argue. Delamanid and bedaquiline, one recent study noted, “represent hope for better outcomes”.

In April 2014 delamanid received “conditional approval” by the European Medicines Agency (EMA), and in October 2014 the World Health Organisation (WHO) released its interim policy guidance for the use of the drug in the treatment of MDR-TB.

Availability is still limited. By the end of 2015, at least 39 countries had started using delamanid. But by October 2016, just over 400 patients had been treated with the drug.

October 2017 saw India introducing a rollout of delamanid, based on – among other things – promising results observed in South Africa.

Patients with MDR-TB are effectively presented with a rock and a hard place: a disease they will certainly not survive, or risky treatment. For patients like Kuse, the choice was clear.

Kuse says her results were dramatic. She gained weight and “everybody noticed the difference”. She began dancing, singing in the church choir, stopped sleeping so much, started reading again.

Jennifer Hughes, TB specialist at MSF, says she observed a huge improvement in Kuse. “We pay particular attention to young patients so we can share our experience and add to the limited information available on using delaminid in under-18s.” To date, the drug is largely used on adults.

MSF patients, says Hughes, have reported fewer side effects on delamanid compared to other MDR-TB medications.

Kuse no longer has signs of active TB in her system and has maintained negative monthly sputum cultures. She stuck to the treatment programme until September 2017 and was discharged as cured. MSF is calling for delaminid to be distributed more widely to all patients who require it.

What of bedaquiline? MSF says almost three quarters (74%) of its patients receiving a combination of the two drugs for six months achieved “culture conversion”, an early indicator that treatment might ultimately be successful. The data is anecdotal, but MSF is cautiously optimistic.

“This is really positive news: cure rates for drug resistant TB are typically poor – respectively 48% and a shocking 24% in South Africa,” MSF said in a statement.

Little other research exists globally on the combined use of the two new drugs. MSF’s clinic in Khayelitsha is one of the few sites in South Africa where delamanid is available.

At the 48th Union World Conference on Lung Health in Guadalajara, Mexico on 13 October, MSF presented early data from their programmes in South Africa, India and Armenia, regarding treatment outcomes for people with DR-TB, if access to delaminid could be expanded.

Khayelitsha is one of several global locations where MSF offers patients with limited treatment options the choice of delamanid, sometimes in combination with bedaquiline (the only other new DR-TB drug developed in the last 50 years and approved for use in DR-TB patients by the WHO).

“The standard treatment for DR-TB must be given for up to two years and comprises at least five different drugs, including painful injections that can cause deafness in up to 50% of patients receiving them,” MSF said.

“The WHO endorses delamanid to replace the injectable agent for children and adolescents with DR-TB in cases of intolerance or resistance to some drugs, giving this group an option more effective and less toxic than standard treatment,” says Dr Anja Reuter. “As MSF, we attempt to offer delamanid as a primary option for children and adolescents with DR-TB whenever feasible, to avoid the risk of side effects from the injectable drugs.

“Delamanid can also strengthen the treatment regimen for more complex cases, such as people with XDR-TB, or DR-TB patients who are living with other chronic diseases like diabetes, or HIV. It is a good option for HIV co-infected patients because it doesn’t require patients to change their antiretroviral treatment,” Reuter added.

MSF estimates that each year at least 7,000 DR-TB patients in South Africa could benefit from delamanid, but access remains limited. The National Department of Health launch of the Delamanid Clinical Access Programme (DCAP) in March 2017, but uptake has been slow, with just 10 of the 400 treatment courses pledged by pharmaceutical manufacturer Otsuka allocated to date.

This is in part because the eligibility criteria currently exclude people with XDR-TB, and patients on bedaquiline. South Africa’s Medicines Control Council (MCC) is reviewing a revised protocol that would expand DCAP eligibility to these groups, as well as a dossier to fully register delamanid in South Africa.

“It is imperative that the MCC take urgent action to help expand access to delamanid,” says Reuter. “When products are registered, access improves. The Bedaquiline Clinical Access Programme started with just over 200 patients in two years, but in the two years since registration and introduction into national guidelines, South Africa has initiated over 6,700 patients on bedaquiline. We are pleased that the MCC is prioritising a rapid review of delamanid for registration, and while registration is pending, we look forward to the MCC approving the expanded DCAP criteria so that currently excluded groups can benefit.”

Infectious disease specialist and Forbes contributor Judy Stone argues that progress in eradicating TB will continue to suffer from budget constraints, especially in poorer countries, unless pharma and governments “step up more”. Stone points out that TB killed 1.8-million people in 2016, or 4,900 people every day. And, she adds, while side-effects are a concern, a far greater worry is availability. Bedaquiline, she points out, has reached just 1,000 people despite being approved in 2012. Stone lays the blame largely at the feet of pharmaceutical companies. US President Donald Trump’s approach to healthcare funding will not help, she adds.

“We have seen what can be accomplished when a concerted effort is made, with sufficient funding, to tackle a major infectious disease. HIV/AIDS has been transformed from a death sentence to being a chronic but controllable condition,” Stone argues.

“The good news is that there are finally some new drugs for TB, and that repurposing older antibiotics is being systematically studied for effective combinations.

“The bad news is that better diagnostic tests are critically needed to guide more effective treatments. Most troubling is that many of the advances that have been made in the last decade still remain out of reach to millions of patients who need them.” DM