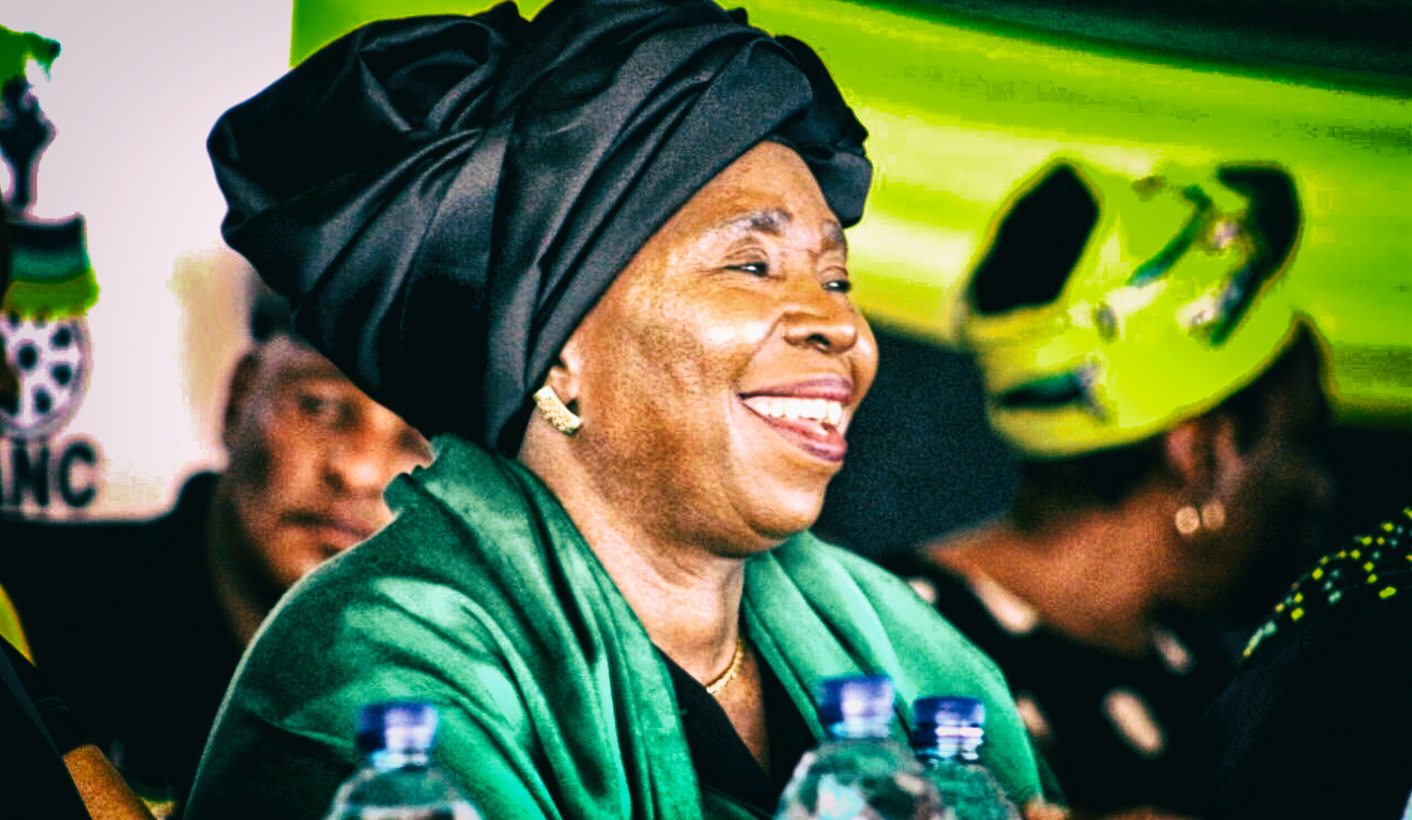 ANC presidential hopeful Nkosazana Dlamini Zuma took the battle to her opponent Deputy President Cyril Ramaphosa’s home ground in Limpopo this weekend, where she preached unity and non-tribalism while striking at the heart of his support base. She also met with traditional leaders and got a warmer reception there than Ramaphosa’s camp might have liked. By CARIEN DU PLESSIS.

It’s hard to tell whether the two leading ANC presidential hopefuls, Deputy President Cyril Ramaphosa and MP Nkosazana Dlamini Zuma, deliberately planned to be in each others’ home provinces at the same time this weekend.

What is clear from Dlamini Zuma’s side, however, is that her rally to the Moreku Senior Secondary school in Mohlarekoma (near Jane Furse) in the hilly and rural Sekhukhune region of Limpopo had some intent of striking at the heart of the opposite faction: about 10km from the school is the home of provincial ANC chairperson Stan Mathabatha, a staunch Ramaphosa supporter. The region is said to be evenly divided between the camps.

Provincial and local #CR17Siyavuma campaigners gathered in a rival event at the same time as Dlamini Zuma’s about 20km away from Mohlarekoma, but because Ramaphosa was in KwaZulu-Natal at the time, they didn’t have a headline act and the gathering was perhaps just a way of telling the others: “We see you.”

Dlamini Zuma supporters put the provincial support at about 60% to 40% in her favour, while Ramaphosa supporters see these figures inverted, at the very least.

ANC people in Limpopo reckon Ramaphosa’s support in his home region of the former Venda is actually quite weak, and that he derives his strength from other regions in the province. On the same score, President Jacob Zuma’s home municipality of Nkandla has never been his strongest support base, and has even fallen to the IFP during the height of his power, so this might mean nothing at all at a national level.

During her two-day visit to the province, Dlamini Zuma also sought the support of traditional leaders (influential here in the rural areas) and on Sunday morning before her rally visited the home of the Kgosikgoloko royal family at Madibong village in the Sekhukhune region.

The Moreku school is incidentally the same one where Economic Freedom Fighter leader Julius Malema once addressed students, seven or eight years earlier, as he grew increasingly defiant in his ANC Youth League rebellion. Whereas Dlamini Zuma bused in supporters from five regions in the province and filled two medium-sized marquees luxuriously carpeted with fake grass, Malema addressed the learners in a square between the classrooms.

Dlamini Zuma’s visit also reminds of Zuma’s occasional campaigning in the province in the run-up to the ANC’s contested 2007 Polokwane conference, down to the meetings with the traditional leaders but minus, perhaps, the burning of imphepho (sacred herbs) and the singing of struggle songs like Mshini Wami.

Dlamini Zuma was dressed in ANC Women’s League regalia: sensible shoes, a sensible black skirt, bright green blouse and bright green pashmina shawl that was so long it reached the ground – a mark of acknowledging that the event was organised mainly by the women’s league. Its president, Bathabile Dlamini, was also in attendance. ANC Youth League leader Collen Maine, who has been scarce of late, was there as well, almost hiding underneath his cap and behind a flower arrangement on the table, quite the opposite of Umkhonto we Sizwe Veterans’ Association spokesperson Carl Niehaus, who was vocally out there and occasionally seen putting his arm around the shoulders of fellow women comrades.

Photo: Nkosazana Dlamini Zuma at a rally in the Sekhukhune region in Limpopo on Sunday, where she was flanked by ANC Women’s League president Bathabile Dlamini (to her right), ANC Youth League leader Collen Maine (behind the flower arrangement to her right), and Umkhonto we Sizwe Military Veterans Association spokesperson Carl Niehaus to her left, as well as Public Service and Administration Minister Faith Muthambi and other ANC leaders and members of parliament from the province.

Dlamini Zuma started her speech – which was engaging but not rousing – by acknowledging the struggle history of the region and the role of the traditional leaders.

She went on to speak about economic transformation, land, and how important it was to have economic power to be able to hold on to political power.

The interesting part of her speech, given that she was delivering it in a province where she spoke none of the languages (her speech was in English, while the sometimes restless crowd consisted mostly of Sepedi and Ndebele speakers), was on tribalism and social cohesion.

“I’ve been to the continent and I’ve seen what starts conflicts,” the former African Union Commission chairperson said. Conflicts were mostly within countries, she said, caused by, among others, “the management of diversity”.

This should be done “in such a way that no group of people should feel they are marginalised” from participating in the country’s democracy and economy.

That was why the ANC at its founding said the “demon of tribalism” had to be buried. “We cannot allow that demon to raise its head again,” she said.

Perhaps this wasn’t so much a reference to the rise of Zulu nationalism – and tribalism more generally – under Zuma’s rise and reign as it was a plea for those in the province not to support Ramaphosa just because he was “one of them”.

Dlamini Zuma referred to something fellow MP Dickson Masemola, who was also at the gathering, said somewhat apologetically to her because he thought she’d be sensitive about it as a Zulu. “I’m a South African,” she said, adding that South Africans should embrace one another’s cultures.

The lack of even development could also start conflicts, she said. “That’s why we must make sure the economy of this country is conferred to the majority of the people, that the status quo does not continue, because it is not sustainable. But also, if we continue like this, how do you think we will have a stable South Africa when we continue to build an army of unemployed young people and of the poor,” she said.

The ANC, however, needed unity to fight for its policy of radical economic transformation. “United we stand, divided we fall,” she said. “We must have unity of purpose.”

She also seriously side-eyed those who said the party would lose the 2019 elections if she were to become its president, implying that this was simply down to hard work by those in the ANC.

“We don’t have an option. We have to win in 2019 in the ANC. It’s not a nice option, it’s an imperative. And we are going to win because all of you here will work for the ANC to win,” she said to applause.

“So how can the ANC lose? So we must call to order anyone in the ANC who says the ANC is going to lose.”

Dlamini Zuma urged against de-campaigning other candidates in the party’s presidential race, and said those elected must be able to work with and on behalf of those who aren’t elected at the ANC’s December conference at the Nasrec Expo Centre.

“When you stand for election, you stand because you want to win, but at the same time you know you can lose,” she said. “So if you want to stand for any position in an organisation, you must lead but you must also be ready to be led.”

It’s hard to tell whether this is the magnanimous talk of someone who knows she is winning, or whether it’s a plea for generosity from a possible loser.

Judging from the spirit in the marquee on Sunday, it’s the former. Some of those who attended – most were women – said they wanted to see Dlamini Zuma become president.

An unemployed mother of three who travelled about two hours to be at the gathering said it was now the turn for a woman president. When asked why, she said “a woman would understand better”, but didn’t specify the exact issues.

A 24-year-old with an ANC headband was a little more brash. “I know nothing about these things [politics],” she said, apparently not quite knowing who Dlamini Zuma was. “I’m only here for the T-shirt,” she said, pointing to the prize she was carrying under her arm. She also took selfies with Niehaus and anyone else who cared to pose.

Some, apparently, also came for the free food, but due to a short supply some of the very hungry and unlucky ones had to resort to eating the bits that fell on the ground during the scramble after the meeting.

The work was not quite done yet for the provincial team of the ANC Youth League on Sunday. Zuma is set to visit the province on Tuesday – in his official capacity as president of the country – to unveil a newly built pedestrian bridge across the N1, and the young ones will have to mobilise supporters to come to the event.

Either way, during his next visit to his home province, Ramaphosa might find he has a few fires to put out. DM

Main photo: Nkosazana Dlamini Zuma at a rally in the Sekhukhune region in Limpopo on Sunday, 15 October. (Photo: Twitter)