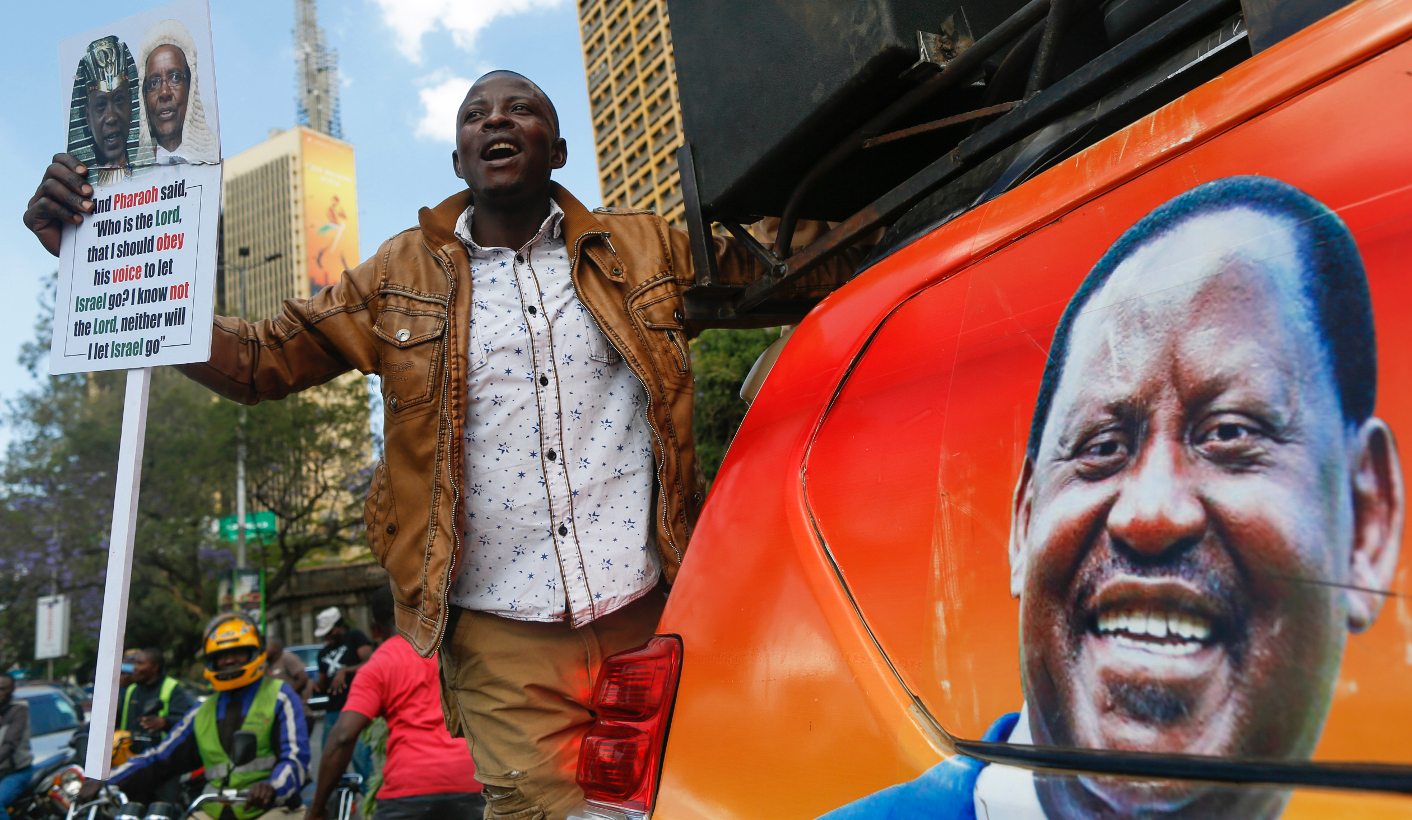 Kenyan presidential challenger Raila Odinga has plunged an already tense country into further uncertainty by withdrawing from the repeat presidential elections on 26 October. By PETER FABRICIUS.

Odinga’s decision to withdraw from a contest which he said would not be free and fair leaves President Uhuru Kenyatta as the only candidate. The decision has  sparked renewed fears of violence, especially after Odinga’s coalition NASA called for street protests on Wednesday against Kenyatta’s rejection of demands for reforms to the electoral system.

The Independent Electoral and Boundaries Commission (IEBC) declared Kenyatta the winner of the 8 August presidential election. But Odinga disputed the results, claiming electoral fraud. On 1 September the Supreme Court annulled the presidential election, citing “illegalities and irregularities” in the IEBC’s tallying of votes and transmission of results.

The IEBC then announced a new election would be held on 16 October but later postponed this to 26 October to allow more time for preparation.

Odinga has been engaged in a running dispute with Kenyatta and the IEBC since then, demanding the firing of several IEBC officials allegedly complicit in the mishandling of the 8 August poll and also insisting on changes to election procedures. He also wants a different company to print the ballots this time, suspecting the company which printed the 8 August election ballots was in cahoots with Kenyatta’s party.

And he objects to the intention of Kenyatta’s Jubilee party to ram through amendments to the electoral laws before the poll. He suspects these changes are designed to help mask electoral fraud, closing loopholes which were exposed in the August poll. Another proposed amendment would automatically grant victory to the other candidate if one candidate boycotted an election – which now seems likely to happen.

Announcing at a press conference in Nairobi on Tuesday that he and his running mate Kalonzo Musyoka had decided to pull out of the re-run, Odinga said NASA had provided a check list of the minimum changes to the IEBC that would be necessary to ensure the election was free and fair and conformed to the constitution and the law, as the Supreme Court had ordered when it annulled the August poll.

But the government and the IEBC had insisted the poll should go ahead without these reforms as there was not enough time left to make them, Odinga said.

“We have come to the conclusion that there is no intention on the part of the IEBC to make any changes to its operations or personnel to ensure that the illegalities and irregularities that lead to the invalidation of the 8 August election do not happen again.

“All indications are that the elections on 26 October will be worse than the previous one. On its part the Jubilee administration has proposed amendments to the electoral laws demonstrate that it has no intention of competing on a level playing field.

“We will not allow autocracy back into Kenya,” he declared, berating the international community which had once supported Kenyans in their quest for democracy and good governance, for now taking the side of “ a dictatorship in the mistaken belief that it will provide stability”.

This may have been a reference to the US State Department which had issued a statement on 6 October, saying it was deeply concerned about the deterioration of the political environment in Kenya.

And then, apparently switching its attack to Kenyatta’s government, the US added: “Changing electoral laws without broad agreement just prior to a poll is not consistent with international best practice, increases political tension, and undermines public perceptions of the integrity of the electoral process.”

Addressing party supporters later on Tuesday, Kenyatta vowed to go ahead with the elections without Odinga. “It is Raila Odinga’s democratic right not to participate. It is also the peoples’ right to participate in an election to choose their leader.

“So whether you are there or not, we are proceeding to the people who have the sovereign right to elect the leader of their choice. And no one individual can stand in the path of the progress of 45-million Kenyans.”

Gabrielle Lynch, a political scientist at the UK’s University of Warwick said she thought Odinga’s move was “understandable, given NASA’s concerns about heading into another election with the same IEBC and electoral procedures in place”.

Odinga’s aim was however,  more difficult to second guess. “It could be about trying to push for a delay of the election and further reforms, but it could also be about political positioning ahead of the next election in 2022.

“In terms of the potential for violence, this depends on a number of things including what kind of boycott is organised and whether some elements seek to prevent any voting, counting and tallying from taking place. If the election goes ahead without Odinga then this will severely undermine the government’s credibility.”

Alphonce Shiundu, a Kenyan political journalist said he believed Odinga was not bluffing but suggested that the IEBC, if it was wise, would seek clarity from the Supreme Court on whether or not to proceed with the election with only one candidate, Kenyatta. It would be a bad decision if they chose to proceed without Odinga in the race.

Shiundu said Odinga’s withdrawal definitely had the potential to stoke violence. Although many in Kenyatta’s Jubilee were publicly celebrating, Shiundu said in private many were concerned that even if Kenyatta is sworn in after 26 October, “that will foment an even bigger crisis, considering that his election was annulled because of major irregularities and illegalities in the voting process. Kenyatta himself appeared upset at the news”.

“They are worried that for the last nine months, it has been a political atmosphere with the elections on everyone’s lips. Then came August where everything shut down for the elections and the fear of violence. Then there was a limbo after the 1 September ruling annulling the elections, and the ensuing stand-off where the president abused the judiciary, and his minions attacked individual judges; while the opposition began its onslaught on the electoral commission, this just made the economy slow down. The uncertainty had a cut-off date of 26 October, but right now, with that, it is indefinite.

“The question I hear people asking is ‘What next?’ I really don’t know. The opinions, even from well-schooled lawyers, depend on whether they support the president or Odinga. Only the Supreme Court can clarify what happens next.”

Meanwhile the Kenya National Commission on Human Rights said on Tuesday that at least 37 people had been killed in the violence that followed the announcement of the August election results. It said many of these had been protesters killed by police. DM

Photo: A supporter of the opposition coalition The National Super Alliance (NASA) and its presidential candidate Raila Odinga stands on Odinga’s campaign vehicle as he joins others to protest in Nairobi, Kenya, 6 October 2017.  Photo: EPA-EFE/DAI KUROKAWA