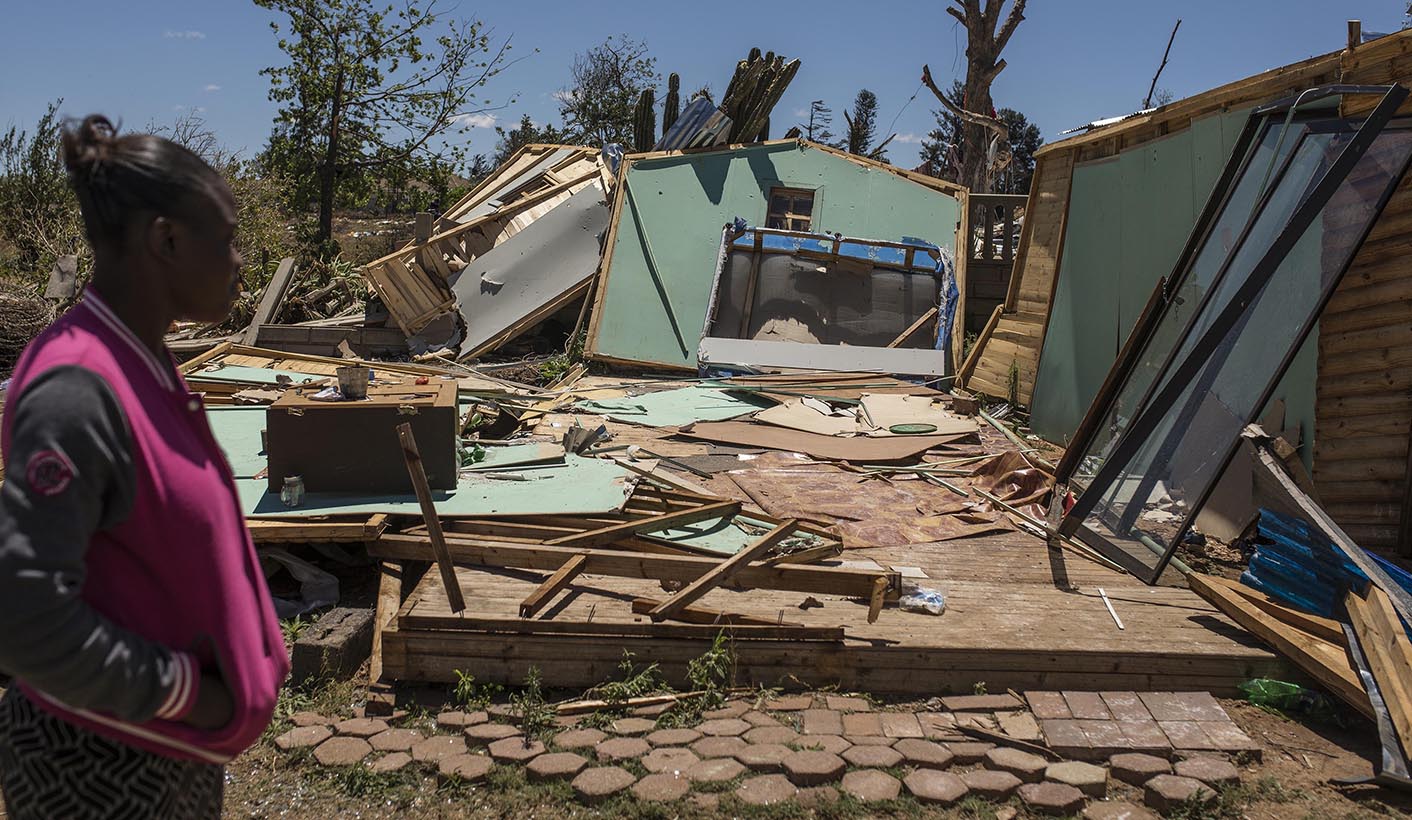 Gauteng was hit by a severe thunderstorm on Monday, destroying property and resulting in the death of one person and many being injured. Areas of the West Rand and Ekurhuleni have been the worst affected. All photos by IHSAAN HAFFEJEE.

In the township of Mayibuye near Krugersdorp on the West Rand shocked residents are trying to come to terms with the destruction.

Photo: A wall was blown down by the force of the winds which accompanied the storm which destroyed property in the township of Mayibuye. Photo: Ihsaan Haffejee.

Photo: A damaged electricity pole on the streets of Mayibuye near Krugersdorp, west of Johannesburg. Photo: Ihsaan Haffejee.

The area was without electricity and the water is not working as before, according to residents.

Photo: Displaced residents of Mayibuye stand outside with their home furniture and other belongings after their home was destroyed by a storm. Photo: Ihsaan Haffejee.

Photo: A brick structure lies in rubble the day after a storm wrecked large parts of the township of Mayibuye near Krugersdorp, west of Johannesburg. Photo: Ihsaan Haffejee.

Photo: A woman searches for firewood with her baby on her back in Mayibuye, west of Johannesburg. Photo: Ihsaan Haffejee.

Electricity in the area has been cut off as trees have fallen onto electricity poles and water supply is erratic, according to some residents. People were seen trying to repair their homes, some fearing a return of the storm.

Mitah Mase, 72, saw her home in the township of Mayibuye near Krugersdorp destroyed. “I just closed the door and said a prayer as the rain and wind came as I have never experience such a thing before,” said Mase.

Photo: Mitah Mase, 72, is seen inside her destroyed home in the township of Mayibuye near Krugersdorp. Photo: Ihsaan Haffejee.

Photo: The damage done by the storm to Laerskool Protearif, a primary school in Krugersdorp, was extensive. Photo: Ihsaan Haffejee.

Photo: A young child from Mayibuye is seen helping her mother carry firewood. The storm has left the area without electricity and residents will have to reply on other methods to keep warm and to cook food. Photo: Ihsaan Haffejee.

A nearby primary school, Laerskool Protearif, sustained so much structural damage that they will be forced to close for the remainder of the year.

Children will have to be accommodated at nearby schools, according to MEC for Education Panyaza Lesufi. DM

Main photo: A resident stands near the remains of a home destroyed by a storm which affected the township of Mayibuye near Krugersdorp, west of Johannesburg. The area is without electricity and the water is also not working as before, according to residents. Photos: Ihsaan Haffejee.