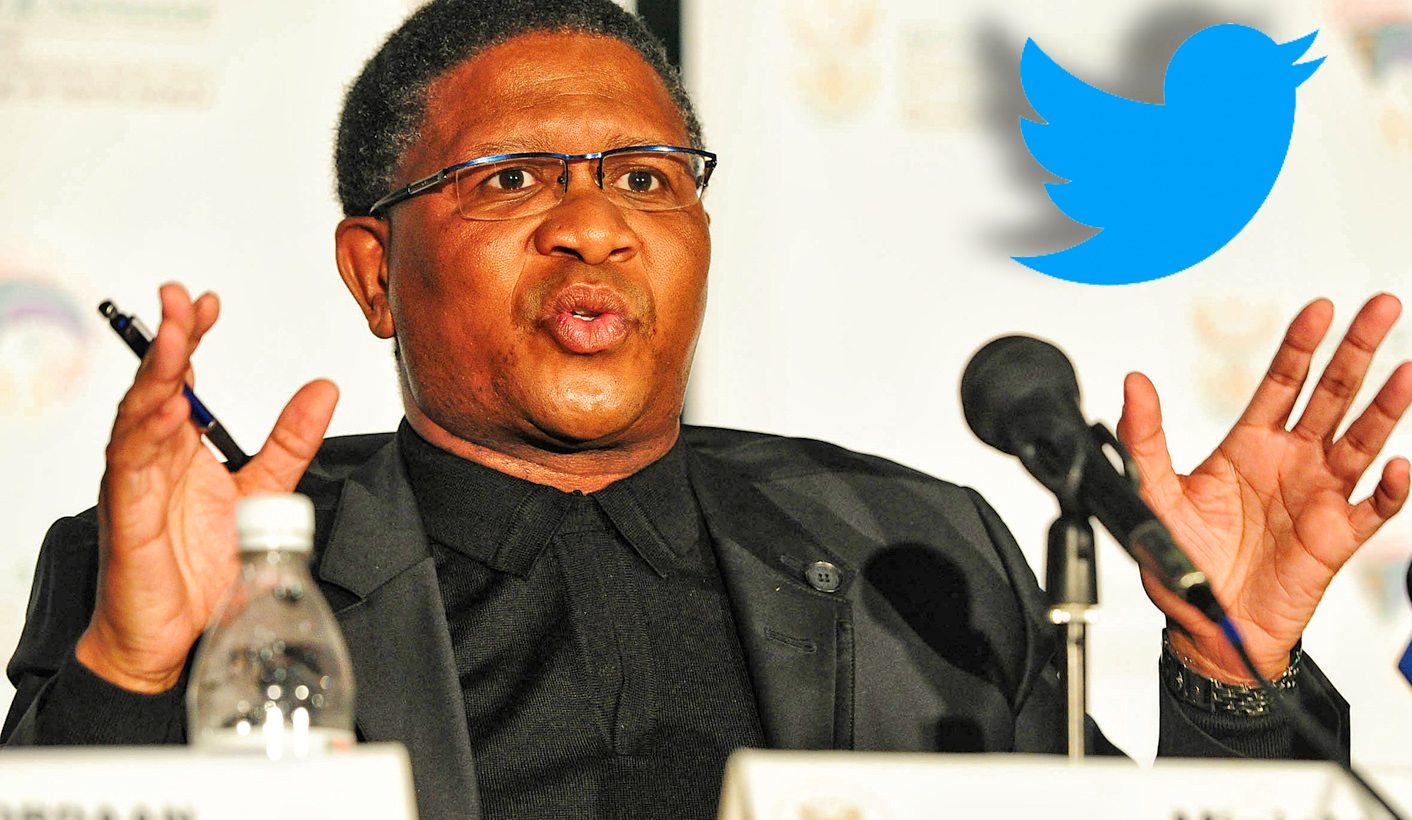 While Minister Fikile Mbalula clearly understands that stealing money directly from the fiscus is a no-no, he doesn’t seem to grasp the finer points of conflict of interest.

As much as any ANC apparatchik on the current ministerial roster, Police Minister Fikile Mbalula is given to bargain basement strongman-isms. Since he was promoted to his new position in March of 2017, his Twitter feed has resembled a feverish parody of Philippine president Rodrigo Duterte’s more outrageous utterances.

“We will squeeze their balls,” he recently promised, in a presumed reference to the criminals he professes to loathe. (He followed this up with the hashtag #OperationSqueeze.)

Continuing on a urological tack, he told a crowd of police at the launch of the elite Tactical Response Team and tracking units that, “They must piss and drink it, the criminals.” Either deliberately flouting due process or in total ignorance of the law, he’s proudly Tweeted images of several men lying face down on the tarmac, their features clearly exposed, advertising a “midnight criminal space shake-up”.

Whether this has in fact shaken up the “criminal space” remains an open question: just in the last week, the attacks on three families have claimed the lives of 16 people in KwaZulu-Natal and the country appears to be sinking further into paroxysms of violence and despair.

Not all of this can be blamed on Mbalula — the horrific new crime data recently dropped by StatsSA refers to the reporting period prior to his tenure. That said, he doesn’t appear to have the requisite understanding of what policing entails: despite South Africans’ N.W.A.ish assertions regarding our girls and boys in blue, the SAPS comprises fellow citizens and human beings – 37 of them were killed on duty just in the first six months of 2017, with almost 600 of them attacked while on duty in the same period. They deserve a minister who doesn’t demand that they yell out “Let them piss and drink it” in unison at a Tactical Response Team rally.

But one thing Minister Mbalula certainly understands is the high life. He has been pictured ringside at a Floyd Mayweather fight in Las Vegas; his suits are often dandy-ish enough to rival those worn by the current Finance Minister, Malusi Gigaba. As Sports Minister, Mbalula was profligate on parties and stingy on athletes. So it came as little surprise when, on Monday, EWN broke the story regarding Mbalula’s R680,000 December holiday to Dubai, a portion of which was paid for by Sedgars, a supplier of sports clothing to the South African Sports Confederation and Olympic Committee (Sascoc). This was as clear-cut a case of corruption as a news organisation could ever hope to uncover.

Instead of dealing with the enormously serious allegations head-on, Mbalula has decided to engage in a flap with… well, Zapiro. Following the publication of an image that depicted Mbalula tweeting away some of his more notable brain farts, alongside an empty panel titled “Action”, Mbalula took time out of his enviably capacious schedule to fill the empty space with a number of his recent accomplishments:

Squeezing umona out of Zapiro. I’ve fixed his bias and prejudiced Cartoon.

RETWEET IF YOU AGREE pic.twitter.com/iGFr7dxuqJ

Zapiro countered with a second cartoon, which depicted the Police Minister furiously Tweeting empty justifications, alongside an empty column captioned “Straight Answer on Kickbacks-Bankrolling of his R680,000 Dubai Family Holiday.” Excuse the clunky verbiage, but describing cartoons is an exhausting process. For easier reference, here’s the cartoon itself:

Once again, Mbalula got right to it, filled the blank column with “Taxpayers paid 0.00 for it” [sic], and Tweeted it, appended with the hashtag #HandsOffSqueezeOn:

Goodmorning tweeps, we had to FIX another cartoon for @zapiro. Our Fixing yesterday got him angry.

Retweet this one and make him more pic.twitter.com/ewX1bNa4tr

Of course, it hardly matters that taxpayers weren’t directly on the hook for the better part of Mbalula’s Dubai festivities. We pay for corruption in many different ways, including through inflated prices our ministries and departments are charged for contracts secured through pay-to-play deals exactly like this one. The government suppliers aren’t fools – they know exactly where to make up the shortfall incurred by their largesse. They slap it onto the price tag.

And while Mbalula clearly understands that stealing money directly from the fiscus is a no-no, he doesn’t seem to grasp the finer points of conflict of interest.

Let that sink in for a moment: the man in charge of the police doesn’t seem to grasp the basics of the law.

There are, however, laws with which Mbalula is intimately familiar. Before the now famous motion of no confidence vote against President Jacob Zuma, which was conducted last August by secret ballot, the Police Minister was most vociferous in reminding ANC MPs that their duty was not to vote with their consciences, but according to the demands of the party.

“We have a party system in the republic and individuals whilst sworn in constitutionally in Parliament, they owe their being and mandate to the party”, he railed.

Indeed, Mbalula is a party man right down to his R40,000 duds – the only thing he understands is that he’s untouchable, in no small part because of the strange conflation between minister and celebrity that the ANC confers on the favoured sons and daughters of the revolution.

Mbalula is above the law, beside the law and around the law. But because of his entitled status, he is never bound by the law, and nor does he appear interested in upholding it – witness his complete inaction in regard to the #GuptaLeaks. In his mind, the criminals are the poor nobodies he parades on his Twitter account, guilty until proven innocent. Or, worse, they’re the journalists and cartoonists who dare attempt to audit his lifestyle.

An estimated R300,000 of a total of R680,000 holiday trip to Dubai, paid for by a government vendor but all good and no taxpayers’ money spent? Nothing to see here, except fake news and a prejudiced cartoonist?

Congratulations, Minister Mbalula – while desperately trying to defend the indefensible, you lowered the bar of accountability so deeply that it may remain in the mud for a long time. Well done on another great achievement. DM