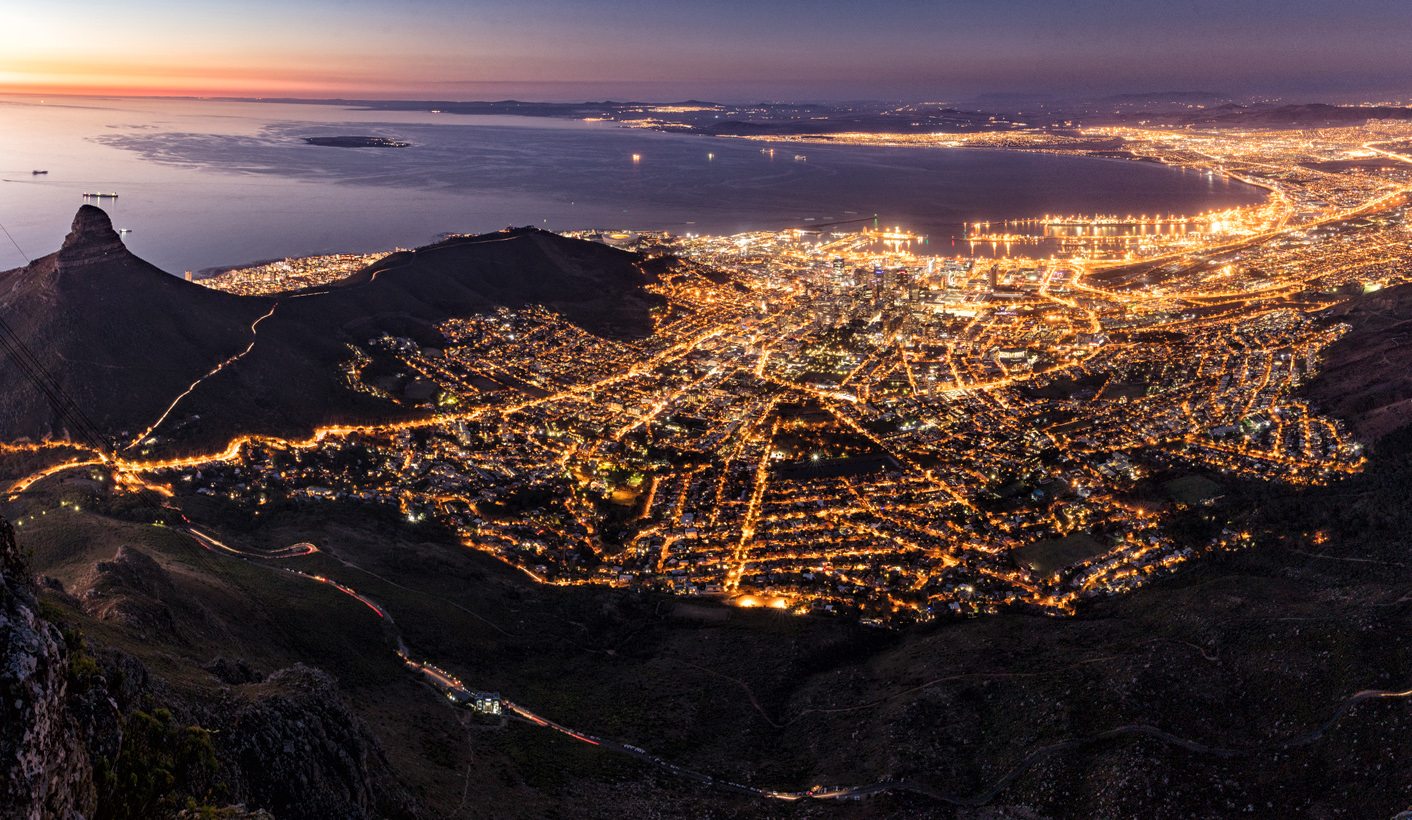 Photo of Cape Town by night by Duncan Rawlinson via Flickr.

Capetonians – at least those who can afford it – need to get used to stockpiling bottled water. This is part of the “new normal” announced by the City of Cape Town this week as it implements Phase One of its water crisis plans. But while there’s now no doubt as to the severity of Cape Town’s water problem, there is still considerable vagueness from the City as to how and when its plans are being applied. By REBECCA DAVIS.

Cape Town’s “new normal” sees water shut off to pre-selected suburbs during certain hours, the City of Cape Town announced this week. The measure, comparable to electricity load shedding, accompanies a reduction in water pressure and is part of Phase One of the City’s disaster plan.

What the City did not reveal is which suburbs will have the taps shut off, and when. A report on Radio 786 stated the fact plainly: “The suburbs are not known.”

The question of why it would be necessary to keep this information from the general public is worth asking.

On Wednesday, Daily Maverick posed the question to the City: “Which suburbs have been selected to experience water outages?”

Councillor Xanthea Limberg, the City’s mayoral committee member responsible for water, responded via email: “ALL suburbs across the metro are being affected or will be affected by rationing to some degree.”

We’re therefore none the wiser as to which suburbs are currently being targeted for disrupted water supply. What are the times in which the still-mysterious suburbs will not have water? One assumes that this information would be useful to citizens for planning purposes.

“The City’s complex reticulation network is divided into supply zones,” Limberg replied. “Definitive timetables of the outages cannot be provided as water systems must be managed flexibly to avoid damage to critical infrastructure, including pipe bursts.”

Limberg added: “It is a much more complex system than for instance what was experienced during electricity load shedding.”

Asked if the City would be making public a schedule of planned current and future outages, Limberg reiterated that this was not possible due to the complexity of the system.

Since the axe could apparently fall on any suburb at any time, Limberg urges “all residents” to store “up to 5 litres of water for drinking and basic hygiene at all times”. Stockpiling municipal water, she reminded Daily Maverick, is illegal.

There is little doubt that the current water crisis is indeed complex, multifaceted and subject to many factors beyond the direct control of the City of Cape Town. Nonetheless, the sense that the public is being given vague and partial information is hard to shake.

Earlier this month, the City said that it cannot provide “operational details” of its Critical Water Shortages Disaster Plan, because such details are “sensitive in a disaster scenario”.

It is unclear, however, how it might be “sensitive” to inform the public about which areas can expect water shortages – unless the sensitivity in question has a political dimension.

During peak electricity shortages in 2014, after all, the subject of which suburbs were experiencing load shedding at what time became a political hot potato. Cosatu went so far as to term Cape Town’s load shedding schedule as “racist”, pointing to the fact that Mitchells Plain and Langa suffered blackouts during peak periods twice a week while wealthy suburbs like Constantia were not affected during this time.

At the time, the City rejected any political conspiracy behind the schedule, saying that Eskom co-ordinated the timetable and that it was reshuffled from time to time.

If the City maintains its secrecy around the current water rationing schedule, however, it is inevitable that similar speculation will surround this round of service disruption.

If the Phase 1 measures fail to ensure that water consumption in Cape Town drops, things get more dramatic. “Intensified restrictions” may kick in at that point. “Due to the emergency nature of this, [they] could be implemented at short notice,” Limberg warns.

Thereafter, Phase 2 sees drinking water cut off from most homes and businesses, with Cape Town residents queuing to collect “a predefined quantity of drinking water per person per day” from collection points manned by police and soldiers.

The drastic nature of Phase 2 means that there is considerable public anxiety around this scenario – but again, no clear timelines can be provided. The City’s disaster plan states that its implementation will be considered “when there is a high likelihood that dam storage will drop below 10% before the onset of the winter rains”.

Limberg says the timeline “primarily depend[s] on water consumption and how quickly all water users in Cape Town respond to the call to drastically reduce consumption to the required levels”. This heavy reliance on Capetonians reducing water usage is also causing some scepticism, however, given that the city is still using more than 100-million litres per day more than the target – and that is before the seasonal influx of millions of visitors over summer. The City believes that the extra water-consuming bodies in Cape Town over this period will be balanced out by locals going elsewhere and industry coming to a halt over the festive season.

Meanwhile, it was reported that scientists at a conference in Muizenberg on Tuesday declared it impossible to extract sufficient water from the city’s aquifers to supplement the existing water supply by December. The aquifers have been one of the great hopes in providing a partial solution to the water crisis.

“Theoretically, it’s possible to extract 100-million litres per day from that aquifer,” John Holmes – the director of the earth sciences company partnering with the City to develop the aquifers – was quoted as telling the conference. “Is that going to happen by December this year? Absolutely not.”

The failure of numerous meteorologists to predict Cape Town’s low rainfall this year shows just how imprecise this water business can be. One can imagine that the City of Cape Town also wishes to avoid creating unnecessary panic about the water crisis. But in maintaining the current drip-feed of vague information to the public, the City is surely not doing much to assuage very real anxieties around the situation. DM

Photo of Cape Town by night by Duncan Rawlinson via Flickr.