ANC Leadership Race: As Sirleaf bows out in Liberia, could Dlamini Zuma be a true champion of women in the south? 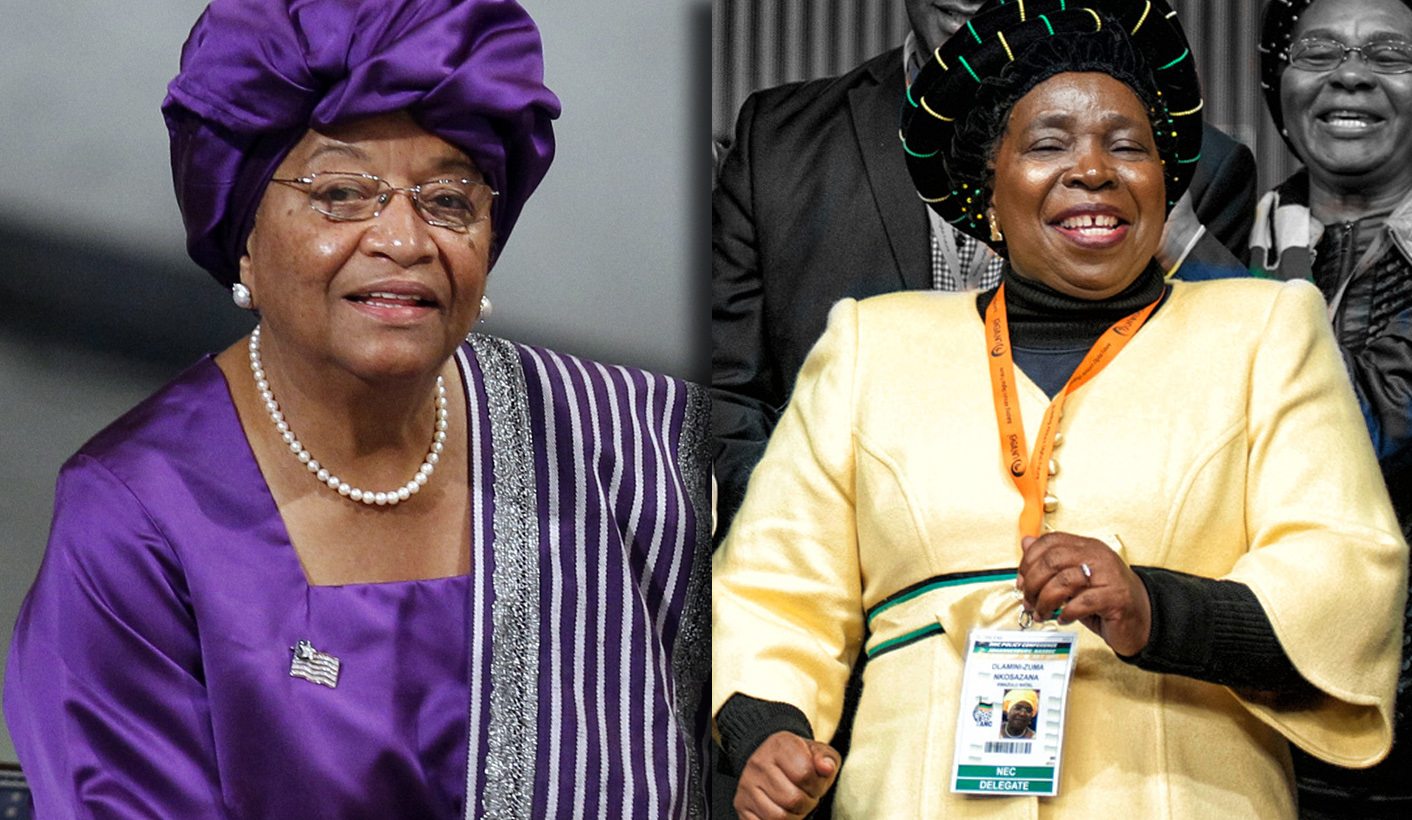 Africa’s first woman president, Ellen Johnson Sirleaf, steps down this week as Liberia goes to the polls on Tuesday to choose her successor. It is expected to be a peaceful handover of power, unusual in that country. On the southern tip of the same continent another woman, Nkosazana Dlamini Zuma, is hoping to follow in Sirleaf’s footsteps by eventually becoming South Africa’s first woman president, for which she first needs to take control of the ANC in a highly contested succession. Her campaigners would want ANC branch members to believe that what she offers is unique, but what lessons has Liberia learnt from their outgoing president about gender? By CARIEN DU PLESSIS.

Before signing off her last speech before the African Union as its commission’s chairperson in January, Nkosazana Dlamini Zuma called Liberian president Ellen Johnson Sirleaf to the podium to hand over a token of appreciation.

In her speech Dlamini-Zuma was talking about imagining and creating “the Africa we want to live in, so that we can bequeath a united and better Africa to future generations”.

Once Sirleaf was at the podium, Dlamini Zuma expressed a “heartfelt gratitude” to the Economic Community of West African States (Ecowas), which had under Sirleaf’s leadership a few months before forced Yahya Jammeh out of power in The Gambia after he lost elections. They “defended the values and principles of our union”, Dlamini-Zuma said.

“You are a pioneer and inspiration to all men and women.”

There is something to say for how refreshing it is to have a woman president, even if it is for the mere sake of it. Sirleaf was voted into power in 2005 by the female vote after 14 years of civil war in the country. Liberia has since been at peace.

A friend who worked in the country has told of the special treatment female guests of the president used to receive. Going around schools in the country, the same friend asked a little boy what wanted to be one day. He said although being president is a woman’s job, he’d like to be president too one day. Sweet anecdote, but when it comes to Sirleaf’s actual record of bettering women’s lives, it’s a mixed one.

After coming from a war in which 70% of women were sexually abused, the country has implemented the most comprehensive anti-rape law on the continent.

However, only 2% of reported cases have resulted in conviction.

Female genital mutilation has also not been criminalised in Liberia, despite women’s rights activists demanding it.

Sirleaf’s successor is also unlikely to be a woman. On a list of about 20 presidential candidates, there is only one woman, humanitarian and former model MacDella Cooper, and she isn’t considered a serious contender.

Despite Sirleaf’s vowing to campaign for female candidates, only 16% of those running for the presidential and legislative elections are women.

Sirleaf also failed to support a proposed law sponsored by the Liberian women’s legislative caucus in 2010 mandating that women should occupy 30% of political party leadership. Only four of her appointed 21 cabinet officials are women.

Still, Quartz Africa noted that even though numbers are still very low, more women than ever are putting their hands up to participate in Liberian politics due to Sirleaf’s influence.

In 2011 Sirleaf was awarded the Nobel Peace Prize for her efforts to further women’s rights.

How about closer to home? Dlamini Zuma already has a track record in government, but it’s been mixed. While as health minister in the 1990s she placed a lot of emphasis on primary healthcare, especially for mothers and children, her siding with sex pest Norman Mashabane in 2006, despite a court finding him guilty, wasn’t the kind of thing you’d expect from someone who calls herself a gender activist.

With her at the helm, the African Union ran a campaign against child marriages and got the buy-in of male presidents, despite it being a very sensitive topic culturally and despite the chauvinism on the continent – a feather in Dlamini Zuma’s gender cap.

At the same time, however, the suppression of gay rights in many African countries continued unabated even with a woman at the helm of the AU Commission.

Should Dlamini-Zuma be elected president of the ANC it will be against the gender odds. Despite the party having very progressive rules dictating that half of its leadership should be women, this has never filtered through to the most contested positions – that of president, secretary-general, and chairpersons and secretaries at provincial and regional levels.

Women are usually slotted into the lesser contested deputy positions.

Women in the party also don’t do well in highly contested situations. The video clips of chairs flying at the Eastern Cape provincial conference last weekend, and the images of injured people emerging, perhaps serve as a good illustration of just how hostile the atmosphere can be. Gender equality doesn’t thrive in violence. The long nights that often characterise party contestation are also not friendly to women who are often the care-givers in their families. If it wants real gender equality, the ANC should address its infighting too (and attitudes have hardened to such an extent that this is unlikely to happen soon).

Anecdotal evidence also suggests that there still is a highly patriarchal culture within the ANC, with many men being averse to having a woman president. Should Dlamini-Zuma actually go on to smash that glass ceiling within the party, is it actually an achievement that could be duplicated soon? It seems unlikely – although in a decade or so the ANC might be out of power anyway, and its presidency would no longer be a big prize.

Also, the fact that Dlamini Zuma is going against ANC traditions – that the deputy president of the party should preferably become the president – might breed resentment in the party, so that when her term as president is up some within the party would cry that they don’t want another woman leader – just as some north African states did when she stepped out after her first term in the AU.

The gender credentials of the campaigners Dlamini Zuma has surrounded herself with are also questionable. Social Development Minister Bathabile Dlamini earlier this year almost collapsed the social grants system because of maladministration, and has been unapologetic about it. Those that benefit from this system are mostly female and they are all poor.

It’s not clear how having a woman in this ministry – the president of the ANC Women’s League no less – has benefited other, and mostly vulnerable, women. If Dlamini Zuma is willing to overlook such weaknesses in her campaigners, how would she address this when in government?

By campaigning on a gender ticket, Dlamini Zuma raises legitimate expectations. Like Sirleaf, she should expect, in the end, to be judged by these standards too. DM