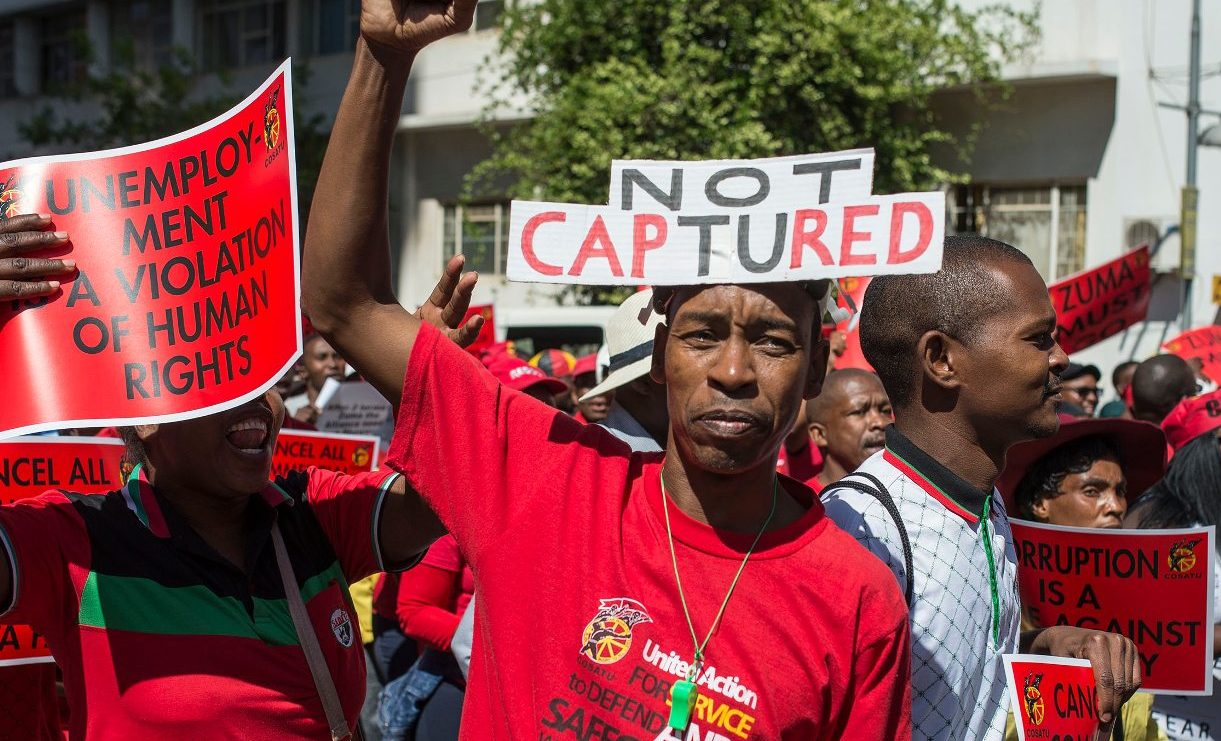 Cosatu has been an enabler of State Capture and was a driving force behind Zuma’s ascending to the presidency. It can’t now divest itself of responsibility for a formal programme adopted 10 years ago and remain in the Alliance. By SARA GON.

The Cosatu marches (on Wednesday 28 September) brought to mind the “self-hostage” scene in Mel Brooks’ movie Blazing Saddles, arguably the best parody of the Western – and commentary on political correctness – ever made. Trigger (pardon the pun) Warning: it was made in 1974.

The bigoted white townsfolk eagerly await the arrival of their new sheriff, a brass band on hand for the official welcome. To their consternation, the sheriff turns out to be black, and, as he mounts the podium, the townsfolk draw their guns on him.

To defuse the situation, the sheriff draws his own gun and puts it to his own head, acting out a “self-hostage” situation that prompts the townsfolk to lower their arms so as to avoid increasing the possibility of the sheriff being killed.

Stephen Grootes notes that “because it has insisted on remaining in what it now calls a ‘dysfunctional’ alliance with the ANC, it is literally in bed with its members’ bosses”.

The marches were against a destructive phenomenon to which it is a party. Cosatu didn’t participate in the anti-Zuma protests in March because it did not agree with the demand for Jacob Zuma’s removal. Although State Capture is about so much more than Zuma, “mass” marches against State Capture just two months before the ANC’s elective conference aren’t convincing.

The marches came after a long weekend, adding further unnecessarily lost man hours in an imploding economy. By week’s end, 34 000 jobs were reported lost in the manufacturing sector in the second quarter of 2017.

To grow numbers, the demands swelled to include job creation, the banning of labour brokers, the provision of basic services and so on. But the marches were a shadow of previous Cosatu marches. The turnout countrywide was no more than 13,000 people.

To add insult to ignominy, when Councillor Michael Sun went out to collect a memorandum from the marchers on behalf of Johannesburg Mayor Herman Mashaba, a Cosatu leader resorted to racial stereotyping in describing Mr Sun. Blade Nzimande, the eternal general secretary of the SA Communist Party (which was also marching), looked on in silence.

Cosatu membership has dropped significantly in recent years. There are a many reasons for this, but the most significant was Cosatu’s expelling its largest affiliate, the National Union of Metalworkers of SA (Numsa). A number of smaller unions followed Numsa. Cosatu now mostly represents public sector unions.

Grootes points to an obvious though ignored contradiction in the alliance:

“… the problem is that Cosatu and the ANC must have different interests and different aims. The aim of the ANC is to exercise political power through its control of government. The aim of Cosatu is to improve the lives and salaries and conditions of its members. The two simply cannot be reconciled. If there is one thing that almost always defines unions and their leaders, it is that for their members they always want one thing – more. There is nothing wrong in that, that is the point of their existence. But if you are in government, you have to provide services for people, and keep the country running. Governing requires trade-offs, you cannot simply give workers ‘more’. You have to ensure that you don’t blow the budget on salaries… and have enough money to invest for the future.”

Gareth van Onselen (‘State capture’ as religious fundamentalism, BL Premium, 27 September 2017) points to a number of key decisions that have helped augment corruption as part of the ANC’s – and by extension the Alliance’s – ethos.

The first is the policy of cadre deployment, adopted at the ANC’s Mafikeng Conference in 1997, to deliver to the ANC control over all “levers of power”. Every public institution was to be brought under the ANC’s direct control.

“Today, cadre deployment has devolved from a way of enforcing hegemonic control, under Mbeki, to a kind of chaotic patronage-based system, designed primarily to secure factional interests and to access public resources for personal benefit.”

The second decision, also made at Mafikeng, was to adopt a new approach to fund-raising. The ANC had relied on donations from foreign allies, but the constraints of formal democracy dried up that source.

The ANC chose black business to be facilitators to be turned to when the party was in financial trouble. BEE programmes soon followed and the government tender transformed into the epicentre of almost any and all state corruption.

Even before 2007 and the Zuma era, Kgalema Motlanthe said: “This rot is across the board. It’s not confined to any level or any area of the country. Almost every project is conceived because it offers opportunities for certain people to make money.”

He continued: “A great deal of the ANC’s problems are occasioned by this. There are people who want to take it over so they can arrange for the appointment of those who will allow them possibilities for future accumulation.”

Ironically, back in 2005 Mbeki warned: “What we do in this regard will define whether our organisation, the ANC, continues to maintain its noble character as a servant of all the people of SA, or degenerates into an ignoble, blood-sucking and corrupt parasite, an enemy of an immensely heroic people.”

Zuma answered Mbeki’s question in 2013: “Everything you touch will multiply. I’ve always said that a wise businessperson will support the ANC … because supporting the ANC means you’re investing very well in your business.”

Cosatu has been an enabler of State Capture. Cosatu was a driving force behind Zuma’s ascending to the presidency. It can’t now divest itself of responsibility for a formal programme adopted 10 years ago and remain in the Alliance.

Van Onselen points out that there are a hundred “Gupta” families “operating on a thousand different levels, from local to national government, each with its own personal agenda, each with its fangs deep into a different sized vein… (seeking) to control tenders and state contracts, to their favour… But that, really, is all. They do not wish to control the state. They wish only to ‘win’ business.”

For Van Onselen, dominance of the narrative of “State Capture” as being where all evil can be traced back to Zuma and the Guptas is wrong: “It is simply not true: one could remove both, and the system and organisational culture that has allowed both to so entrench themselves would remain.

“The greatest victim of ‘State Capture’ is a proper analysis of the ANC and how it operates. And the result of that is a widespread belief that, should both be removed, the situation would be allowed to revert to normal.”

Van Onselen reminds us about Chancellor House and Oilgate.

It’s commonly held that the rot started with Mbeki and escalated spectacularly under Zuma. However, the original mother of all corruption scandals was the Arms Deal. The ANC managed, including through the abuse of a commission of enquiry, to prevent anyone in the ANC from being held accountable. The scandal occurred during the presidency of Nelson Mandela.

Cosatu can put away its gun and resume its schizophrenic existence in the Alliance. It’s dying on its feet anyway. DM

Photo: A Cosatu member with a hat that reads ‘Not captured’ joined thousands of other protesters as they made their way to various points in the Johannesburg CBD to protest against state capture and corruption on 27 September 2017. Photo: Ihsaan Haffejee.